The lawsuit claims that the rule puts more than 10,000 immigrants and their families at risk of homelessness. 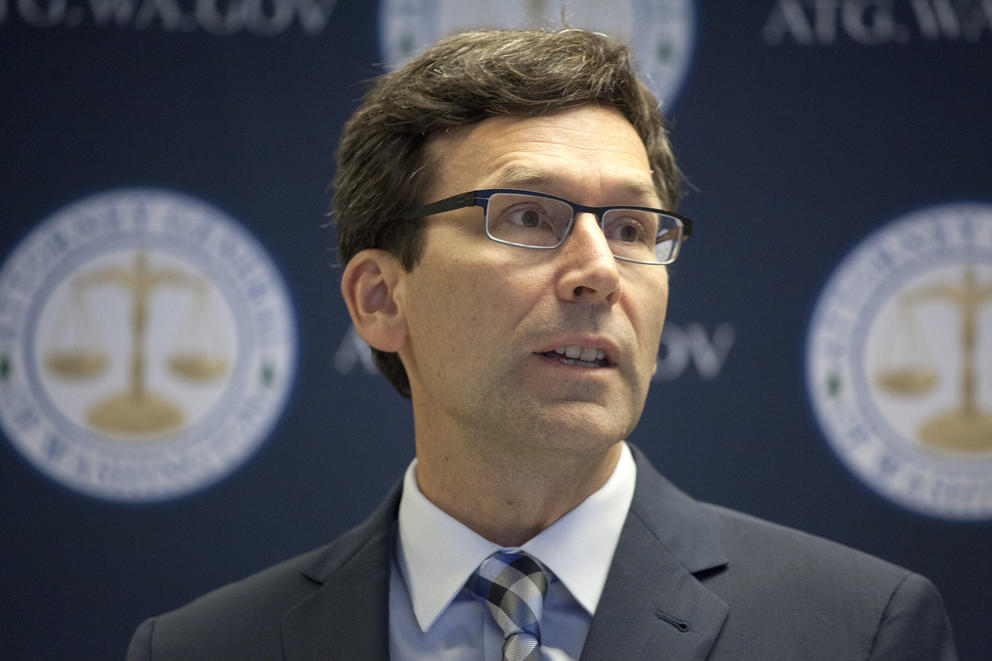 Washington state Attorney General Bob Ferguson discusses a lawsuit against GEO, proprietor of Northwest Detention Center in Tacoma, during a press conference in Seattle on Sept. 20, 2017.

Washington state on Wednesday joined a coalition of 13 states suing the Trump administration over a policy change that would deny green cards to immigrants who use public benefits, such as food stamps and Medicaid.

Under the new rules, the definition of a person who is or will likely become dependent on government programs for subsistence, a so-called “public charge,” will dramatically change.

About 3 percent of noncitizen immigrants with legal status could be considered a public charge under the existing rules, according to the nonpartisan Migration Policy Institute. The administration’s rule change would boost that proportion to 47 percent nationally. In Washington, at least 244,800 people could be affected, according to the Migration Policy Institute report.

“The Trump administration’s message is clear: If you’re wealthy, you’re welcome, if you’re poor, you’re not,” Ferguson said in a press release announcing the lawsuit, filed in U.S. District Court for the Eastern District of Washington.

“It forces families into an impossible choice — to sacrifice their dream of becoming Americans in order to provide health care, food or a roof over their children’s heads, or let their families go without in order to remain in the country,” he said. “This rule is un-American, anti-immigrant and unlawful.”

The White House announced the change to the public charge rule Monday. Although undocumented immigrants, up to now, have been the administration’s preferred target, the new rule slated to take effect in October will impact those who are in the United States legally and are seeking permanent status.

One day after the Trump administration’s announcement, Ken Cuccinelli, the acting head of U.S. Citizenship and Immigration Services, defended the rule change by changing the language contained in the poem etched on the Statue of Liberty.

"Give me your tired and your poor who can stand on their own two feet and who will not become a public charge," Cuccinelli told NPR.

Currently, the definition of a public charge is limited to immigrants who use federal cash assistance programs such as Temporary Assistance for Needy Families, which provides households with financial help, as well as those who rely on government-funded, long-term institutional care. Under the new rules, immigration officials would consider a much wider range of factors in determining whether an immigrant with temporary legal status should be considered a public charge and denied either a green card or a visa extension.

The Department of Homeland Security has redefined a public charge as someone who is "more likely than not" to receive public benefits for more than 12 months within a three-year period. The use of two benefits would count as two months in the calculation.

The new rules also would expand the scope of benefits counted against an immigrant beyond cash-assistance programs. Participation in Medicaid, housing assistance and the Supplemental Nutrition Assistance Program, better known as food stamps, would endanger an immigrant’s eligibility to stay in the United States.

In the lawsuit, attorneys for Washington state point to estimates that more than one-fifth of the U.S. population participates in public benefits programs, and that immigrants access benefits at a rate 27 percent lower than native-born Americans.

Refugees and asylum seekers, however, would not be impacted by the new rules.

Like their counterparts in Massachusetts, Illinois, Virginia and nine other states, attorneys for Washington argue the Trump administration’s plan to penalize immigrants who use public benefits will negatively impact state economies because immigrants fearful of the new rules will “shift from federal programs to state programs that do not qualify as ‘public benefits.’ ”

Others, state attorneys argue, might opt to disenroll from public benefits all together, leading to an increase in the region’s already desperate homelessness crisis and a generally unhealthier population resulting from delays in accessing preventative care. Citing the Kaiser Family Foundation, attorneys for the state estimated that 15% to 35% of Washington’s noncitizen population will disenroll from public benefits programs, with potentially disastrous results.

In Washington, more than 10,000 immigrants and their families will be put at risk for homelessness because of a lack of public benefits, according to the lawsuit. Anywhere from 10,000 to 24,000 lawfully present adults could lose medical insurance annually; the state Medicaid administrator projects that up to 140,000 families could lose insurance.

Ferguson notes this will not only be catastrophic for individuals but could threaten the wider public. Infectious diseases, for example, “may spread as the numbers of immigrants who decline immunization services increase.”

According to the lawsuit, the new rule could reduce Washington’s total economic output by up to $97.5 million annually, cut wages by up to $36.7 million, and eliminate up to 782 jobs.

The lawsuit also details the Trump administration’s rhetoric regarding immigrants. It cites Trump’s reference to “shithole countries” when speaking about immigrants from Haiti and Africa, and refers to Trump calling immigrants from Latin America “bad hombres” during a rally in Arizona.

Moreover, the lawsuit criticizes not only the rule, but the process that created it. Ferguson accuses the Trump administration of violating the Administrative Procedure Act by failing to “provide reasoned analysis, examine the relevant data, or adequately address the significant concerns raised in the public comments.”

Up for public review in 2018, the then-nascent rule change drew 266,000 comments. Many commenters pointed out that the proposed legislation would disproportionately harm immigrants of color. Ferguson argues the administration failed to address that concern and hundreds of other comments.

Ferguson asserts that the new rules also violate the Immigration and Nationality Act (INA) because they go against the established meaning of a public charge, which dates back to the 17th century.

“In the 70 years since the INA’s enactment, numerous statutes and administrative decisions have comported with and confirmed the settled meaning of public charge as a person permanently and primarily dependent on government for survival,” the Washington state attorneys said in the lawsuit.

Other Washington officials have joined Ferguson in the fight against the new public charge rule. When it was first proposed, Gov. Jay Inslee wrote a letter detailing his concerns. Seattle Mayor Jenny Durkan joined a bipartisan coalition of the U.S. Conference of Mayors calling on the federal government to abandon the proposal.

In a statement Wednesday, Durkan said the new definition of a public charge “contradicts the fundamental values on which the promise of America is built.”

“Every day, it seems we wake up to new cruel and hateful policies like this one. Too many people have been hurt. We must and will fight the president’s anti-immigrant and anti-family agenda,” Durkan said, before referencing the Emma Lazarus poem on America’s promise to take in “your tired, your poor, your huddled masses.”

Is it time for Seattle to decriminalize shrooms and psychedelics?

Washington state led on legalizing marijuana. Plant-derived psychedelics could be next.

Federal recognition provides tribes with critical health care and education. But there are nations the U.S. refuses to recognize.