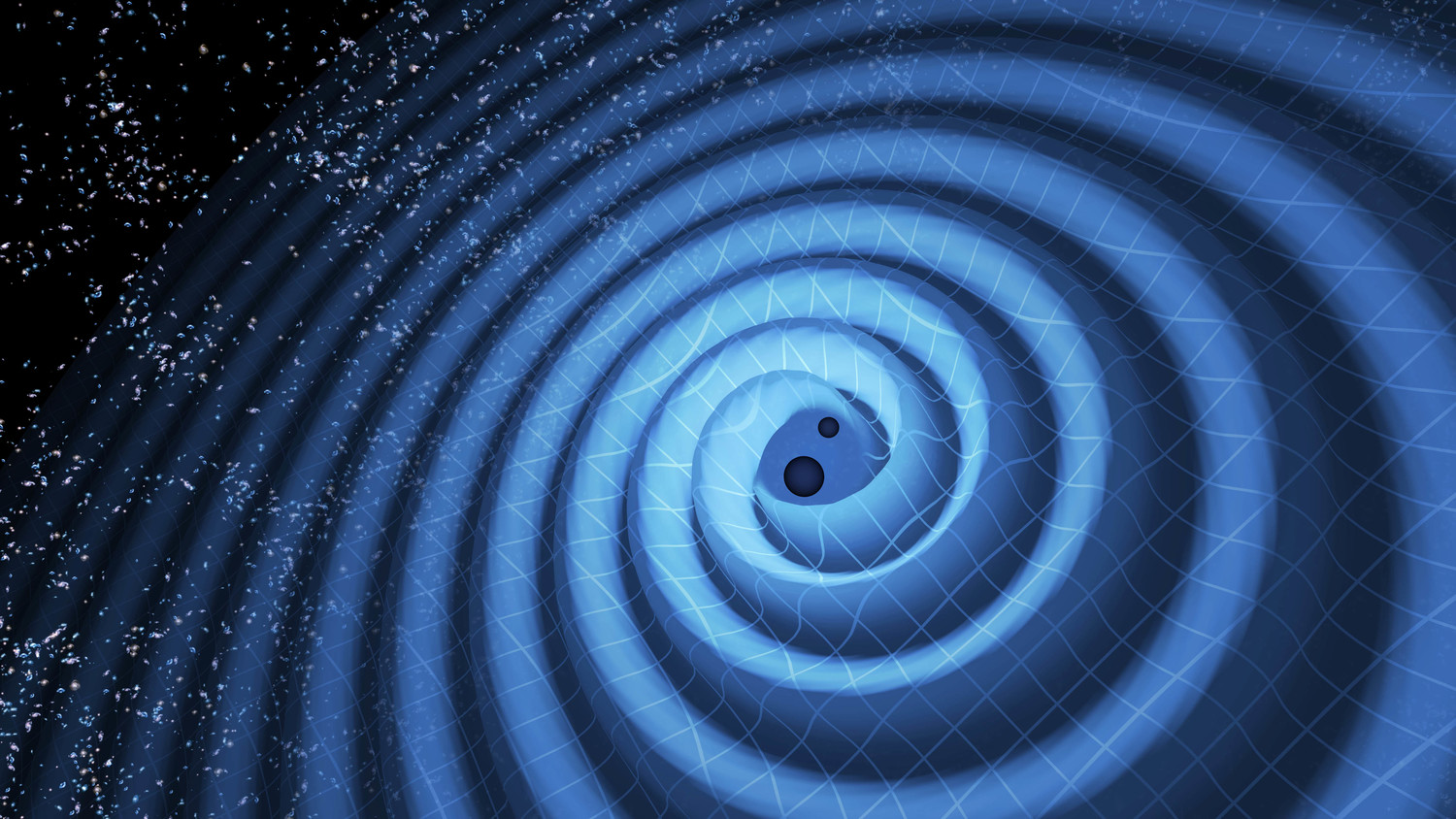 This illustration simulates two black holes circling each other just prior to smashing into each other. (Courtesy LIGO Hanford Observatory)

It was early afternoon Aug. 14 when University of Oregon physics graduate student Matthew Ball noticed the vibe at the Hanford observatory’s control room had changed.

The observatory searches for sources of gravitational waves from deep, deep outer space — and has been on a hot streak of finding them. In recent years, the Hanford Laser Interferometer Gravitational-Wave Observatory, or LIGO, has been on the cutting edge of discovering new black holes and neutron stars.

”There was more energy, more curiosity than usual among the scientists,” he said. “We were all very excited.”

That’s because for the first time scientists at three observatories — Hanford, its sister LIGO facility in Louisiana and a European LIGO facility in Italy — simultaneously discovered gravitational ripples from a type of cosmic collision never seen before. They either watched a black hole 900 million miles away swallow a neutron star or observed one black hole gobbling up “the tiniest black hole ever found,” according to Keita Kawabe, detection lead scientist at the observatory at Hanford.

Either way, the Hanford-linked project’s shared discovery was groundbreaking. This type of physical evidence for black-hole behavior had never been detected before, shoring up the data supporting Einstein’s general theory of relativity, a keystone of astrophysics.

The effect of a black hole sucking up a dense star or tiny black hole is a bit like watching Pac-Man devour pellets or ghosts. Kawabe notes one key difference: “Pac-Man has a mouth pointed in one direction. A black hole is all mouth.”

For almost six months, the Hanford gravitational-wave observatory has been in overdrive locating black holes and neutron stars. This year, it so far has observed 26 probable black holes colliding with each other or neutron stars ramming into their twins. A neutron star is the remnant of a giant star that has become a supernova, leaving a dense husk only a few miles in diameter, but 1.1 to 2.1 times denser than our sun. Both neutron stars and black holes are remnants of collapsed stars that behave similarly, but black holes tend to be even more dense.

“The rate of [discovered] collisions is awesome,” said Jeffrey Kissel, a control systems engineer at the Hanford observatory.

Hanford’s connection to groundbreaking black hole science is well-established. Until Sept. 14, 2015, no one on Earth had detected anything physical from a black hole: Despite their omnipresence in pop culture and science fiction, black holes had existed solely as a theory supported by advanced mathematics.

That’s when the two coordinated LIGOs at the Hanford Nuclear Reservation in Benton County and its sister site in Louisiana captured gravitational waves from two colliding black holes 1.3 million light years away. The way the LIGOs capture gravity waves operates a bit like a microphone catching sound waves and electronically sending them to a loudspeaker.

The 2015 discovery and 2016 confirmation of the first gravitational waves from colliding blackholes led to LIGO-associated scientists receiving the 2017 Nobel Prize in physics. The prize officially went to the LIGO project’s three co-founders: physicists Barry Barish and Kip Thorne of CalTech, and Rainier Weiss of MIT. The Hanford LIGO has an officially sanctioned copy of that Nobel Prize medal on display in its visitors center.

“It’s not like one person or a few persons detected a black hole collision — it was a collaboration,” Kawabe said.

Now almost halfway through their third yearlong session of gravitational observation, the LIGOs are experiencing a bumper crop of black hole collisions. The 26 recorded so far this year handily top the eight black and neutron star collisions of the prior yearlong session and the three in the session before that.

Although Hanford’s science is all above board, the facility does have one feature straight out of sci-fi. Each time a probable collision occurs, a HAL 9000-like voice announces “gravitational wave candidate” aloud from a LIGO control room computer.

After each announcement, the Hanford LIGO scientists talk via the internet with other gravitational-wave scientists around the world to corroborate and issue a preliminary opinion on whether the Hanford LIGO, Louisiana LIGO and their European counterpart (located near Pisa, Italy, and called VIRGO) actually captured a gravitational wave. After much instrumental tweaking,the scientists say LIGO’s percentage of false alarms are low.

After reaching an initial opinion, numerous scientists analyze each discovery for several months to verify or disprove the preliminary decision.

The exceptional readings on Aug. 14 showed strong likelihood of a black hole swallowing a neutron star or a big black hole swallowing a tiny one. Regardless, it’s a brand new discovery in astrophysics: A black hole usually has a mass five to several dozen times the mass of our sun. If this collision involved a tiny black hole, its mass would be significantly less than the five-times-solar-mass threshold, Kawabe said.

“We are probing into new and uncharted territory. We are learning as we go,” Kawabe said. 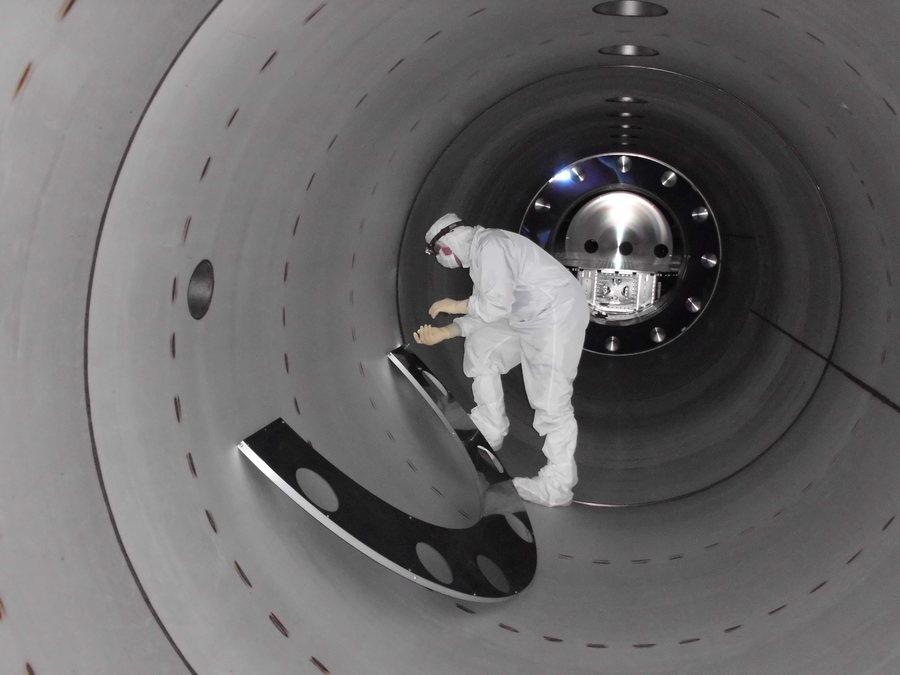 In 2014, a technician inspects the the 2.5-mile long chamber where ultra-precise laser beams are fired to measure gravitational waves and black holes. (Courtesy LIGO Hanford Observatory)

In 2014, a technician inspects the the 2.5-mile long chamber where ultra-precise laser beams are fired to measure gravitational waves and black holes. (Courtesy LIGO Hanford Observatory)

How do you catch a gravitational wave?

Back in 1916, Albert Einstein mathematically wove space and time together, theorizing that massive objects can warp and curve the linked "space-time." The theory makes gravity a property of space-time. All this leads to the idea that space-time can vibrate similar to the way a rock splashing in a pond sends out ripples.

In outer space, those "rocks" could be stellar explosions, dying stars collapsing, black holes and neutron stars circling each other or ripples from an edge of our universe, still expanding from the Big Bang.

Enter a device called an interferometer. LIGO's interferometer shoots an infrared laser beam about the diameter of a flashlight at an angled piece of polished glass, which splits the beam in two directions. The split beams are then further reflected to travel over 2½ miles down two huge vacuum tubes, hitting mirrors at the end to bounce back. If everything is perfect, every bit of light returns to the laser. But if a gravity wave jiggles the mirror slightly, some light goes in another direction to be caught and studied.

In the 1980s, Caltech and the Massachusetts Institute of Technology huddled and decided to build the world's biggest and most sensitive interferometer network. With $372 million in National Science Foundation funds, the two-site LIGO network went online in 2002. Today, the two LIGOs and affiliated scientists scattered across the nation operate on an annual budget of $45 million from the NSF.

Hanford and Livingston, Louisiana, were picked as sites in the early ’90s because they were isolated and, therefore, free from interference from most outside vibrations. Interference from things like local commuter traffic still exists, but they can be identified and calibrated out.

The double LIGO setup at Hanford and in Louisiana helps one verify the waves captured by the other, plus the two sites can help triangulate the direction from which the waves are coming.

Hunting for invisible black holes is a formidable task. Scientists are searching for enormous absences in the universe, spots in space where gravitational pull is so intense that even light and electromagnetic waves cannot escape. The best way to hunt for them is to look for gravitational waves rippling from them.

When gravitational waves get caught, they will move the two LIGOs’ measuring instruments sometimes by as little as 1 billionth of the diameter of an atom. It would take 10 trillion such moves to equal the width of a human hair.

Until 2010, the two LIGOs could detect gravity waves originating only from approximately 50 million light years away, which proved too short a range to find any. Then the two American LIGOS went offline for five years for upgrades; upon completion in 2015, that range increased to almost 390 million light years. That reaches beyond the Milky Way and into the neighboring Virgo Cluster — home to some 1,300 to 2,000 galaxies.

On Oct. 1, Hanford’s LIGO will go offline for 31 days for maintenance and tweaking before finishing the second six months of its current one-year operational run.

The tweaking could add potentially 50,000 more light years to the LIGO’s range, said Betsy Weaver, lead of the detection engineer section at the Hanford LIGO. More mundane measures include erecting plastic walls around parts of the LIGO to serve as windbreaks. High winds occasionally force the LIGO to go offline for short periods.

To some Hanford scientists, building and maintaining the cutting-edge, ultra-precise equipment are the real allure of working at LIGO. While catching gravitational waves thrills Kissel, he sometimes resents the endless stream of new black hole collisions. The constant discoveries prevent him from taking the equipment offline to tinker with and further improve the LIGO’s abilities.

“Building this hardware is pretty much the coolest thing about LIGO,” he said.

The spelling of Jeffrey Kissel's name has been corrected.