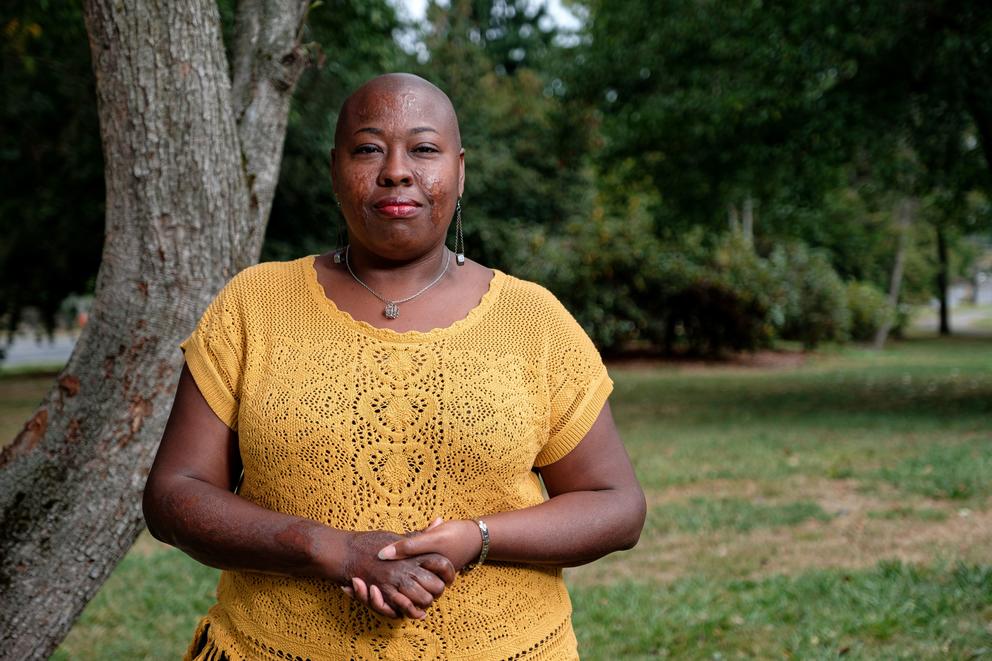 Chevon Powell, founder of Refuge Outdoor Festival. The festival aims to buid interest and community for people of color in the outdoors. (Photo by Caean Couto/Crosscut)

It’s hard to say how or why Chevon Powell was granted a rebirth so close to the beginning of her life. She was only 5 months old when her family’s Houston apartment burned down. She was rescued after suffering first- and second-degree burns on about 75% of her body.

At one point the Powell family was summoned to bid their baby girl farewell.

More than 35 years later, Powell has gone to plenty of places, just not the destination the medical staff at Hermann Hospital had feared.

Powell was released from Hermann on May 12, a date she counts as her “second birthday.” Her friends call it her “Phoenix birthday,” because she rose from the ashes like the mythical bird.

“I’ve been gifted a lot of life I wasn’t supposed to have,” Powell said. She had 14 surgeries by the time she was 15 years old. The last one unsuccessfully attempted to lower three toes in her right foot to the ground. Rather than try again, she decided to keep on moving.

Powell’s many travels landed her in Seattle, where last year she launched the Refuge Outdoor Festival, a three-day camping experience geared toward people of color and their allies. The event centers on community building and includes workshops and arts and other outdoor activities. The second edition will be held Sept. 27-29 at the Tolt-McDonald Park and Campground, near Carnation.

This year’s festival will be capped at 300 participants. People, including Powell’s parents, are flying in from other parts of the country, prompting her to contemplate holding similar events in other regions of the country in 2020.

The festival was inspired by Powell’s experiences at Camp Janus, which she calls “Burn Camp,” a therapeutic and recreational camp in Texas for burn victims. “Burn Camp” revealed to her not only the healing power of nature, but of sharing space with people who either looked like her or shared her circumstances, whether they be racial or gender identities or surviving fire.

Powell is Black, with a cleanly shaven head and a friendly face framed by smoothed-over scars. She comes from an event-planning background. This particular event, the Refuge Festival, happens to be mission-driven, though not in a way that others might assume.

One of the dominant false narratives of the outdoors is that people of color are missing from it. Purveyors cite statistics showing whites accounting for nearly 80 percent of visitors to national parks or 93 percent of bird watchers. On the other hand, 70 percent of respondents to a survey of nonwhite voters said they participated in outdoor activities on public lands.

“We need to change the conversation because people of color do [outdoor] things,” Powell said. “We just talk about it differently. We don't talk about being outdoors. We just go fishing. We just go do the activity.”

Nature was why Powell relocated to Seattle nine years ago, but she already was immersed in it. One of her childhood preoccupations — in addition to a fascination with fire (“I was a little pyro,” she says) — was wanderlust. In grade school, she studied maps of her native Texas, the United States and the world. She became determined: “Oh, I’m going everywhere.”

On a quest to visit all 50 states (she is up to 44), Powell checked off Oregon, then Washington, during an Amtrak trip to Chicago. In Seattle, she spied mountains, trees and water, and vowed to return. She eventually did, taking a job with AmeriCorps, a domestic community service program.

After founding her consulting business, Golden Bricks Events, Powell landed at REI as an event planner. There, she used an employee grant to take a solo backpacking trip in New England, not long after her first-ever backpacking trek, which she did with a group of women of color that summer.

Powell had driven to Stowe, Vermont, where she planned to spend the first night of her two-week journey in a hotel. While checking directions, she noticed she was being followed by a police car. She’d had her share of driving-while-Black incidents, but this one was different.

The white male officer followed her into the hotel parking lot. When Powell exited her car, he blasted his siren and ordered her back in. “What are you doing here?” he asked. She explained her trip, pointed out her pack in the trunk and pair of hiking shoes on the back seat.

“That’s unbelievable,” the officer told Powell, making a not infrequent assumption. He radioed for backup. When it arrived, Powell overheard the first officer uttering the word “unbelievable” several more times, then the second one saying, “Let her go.”

The trip was not derailed. Powell later hung out with a white family in Acadia National Park in Maine, after they helped recover the keys she’d locked in her car. She even encountered one other Black person, a man also from Texas; he too was trying to visit all 50 states. She didn’t mention her first-night incident with the police to anyone, not even him.

Already a seed in her mind, the idea of a Refuge Outdoor Festival began to germinate, she says. “I started thinking, what can I do so things like this don’t happen to people?” Powell added. “I do events.” She went back to REI, then left to start her business.

Death, her lifelong shadow, provided a final push. Powell lost 11 family members during a nearly yearlong sequence. The eighth was a cousin everyone called “Plump.” Powell had just returned from the funeral of another cousin when she received the call about Plump’s passing.

It was a sign to get serious about staging the Refuge Festival.

“Nature keeps me grounded,” Powell said. “It shows that there’s more than just the things I’m dealing with. There’s a grand expanse. … I’m a piece of the puzzle and not everything in the puzzle. It goes back to the community and engaging that community in trying to make this a better place to live for future generations.”

It’s apt that Chevon Powell does what she does to help preserve the future. After all, she wasn’t even supposed to have one.

by / April 20
Focus: On Native Ground