These falconers fly their birds of prey to protect crops, prevent spread of disease and keep refineries clean. They save tens of thousands of dollars for Washington businesses. Jimmy Bathke stands with his peregrine falcon Rex, 6, inside Roosevelt landfill in Klickitat County, Sept. 4, 2019. Bathke lives in nearby Goldendale and has been working at the regional landfill doing abatement with his falcons for 19 years.

Jimmy Bathke stands in the middle of 2,500 acres of garbage, but he's not fixated on the mounds of trash. Instead, he scans the skies. A regal falcon soars above, then flies back to land on Bathke's outstretched hand, protected by a thick leather glove.

The bird is one of Bathke’s three falcons, each trained to control the population of unwanted seagulls and ravens. He’s a Master class falconer, the highest level of falconry license. He has worked at the Roosevelt landfill for 19 years.

Thousands of seagulls will greet him when he arrives for the day. The gulls, along with ravens, haunt the landfill for food. They scatter trash outside Roosevelt landfill, which sits north of the Columbia River in Klickitat County, two hours south of Yakima. The landfill has to meet certain health standards, and because the gulls and ravens spread trash to the surrounding area and to the Columbia River Gorge, it hires falconers. Seagull feces also spread disease, as does their infamous vomit after a hearty day of gorging on trash.

Falconry is not extremely common in this line of work, referred to as bird abatement. About 30 falconers work in Washington, mostly in fruit fields and industrial zones. There are less effective methods, from shooting off shotguns, to catch and release, to firing pyrotechnics. Bathke says before he started, the landfill had an employee fire about $60,000 worth of noise-making shotgun ammunition called shell crackers each year. The problem with these methods is they’re extremely short-lived, Bathke says, whereas falconry is a scare tactic that other birds naturally respond to and know to stay away from.

Because of the falcons' predatory and competitive nature, Bathke flies them one at a time. The raptors can be trained in as few as five to six weeks, but it can take years for them to truly settle into a new environment.

Many falconers use GPS to track their birds, but Bathke insists that’s a young man’s game. Instead, he uses a battery-operated, lightweight transmitter that sends a signal to a receiver. Transmitters can attach to the bird in a variety of ways: a grommet on the anklet, a backpack that slips on over the wings, or a tail mount.

Bird abatement at the landfill is less harrowing than when he worked in agriculture, he says, where he was out from sunrise to sundown to discourage starlings and other pesky birds from ruining Washington’s blueberry and cherry crops.

But abatement isn’t limited to fruit fields and landfills. Resorts and pricey housing developments hire falconers to keep seagulls from defecating on their properties. Bathke says it’s less common because of the intimidation factor of having these birds of prey swooping low through buildings.

Bathke says the work is difficult, specialized and takes a certain breed of person. Most people have a family, a house or a full-time job that prevents them from taking off for a three- or six-month seasonal contract. He worked seven years to receive his Master’s class license.

“You need a unique kind of person to be able to even be qualified, and then be able to do the work where they can cut ties or don’t have responsibilities,” he says. “You can get all the contracts in the world, but where are you going to get people to do the work?”

Sue Hanneman lives an hour north of Seattle and is working on her fifth year as a falconer. She started as a photographer of raptors, but she was recruited by husband, Brad Felger. Felger is the president of the Washington Falconers Association and owner of a large bird abatement company that has about 30 employees at a dozen farms in Washington but also extends down the coast to California.

Hanneman works at a refinery that sits on Fidalgo Bay in Anacortes. She enjoys that her work is independent, solitary and allows her ample time to spend with the birds.

“I love all animals, but I really like the raptors — it’s just the birds and I flying all day long, and it’s wonderful,” she says.

She mainly works to halt the refinery’s major goose problem. The Canada geese previously migrated through every season. The tranquil and clean waters of the refinery’s holding ponds attract migrating geese, and some of them now stay year-round. The water is fouled by the geese’s waste, which throws off the ammonia and nitrate levels in the water, and their molted feathers clog the ponds’ screens. The pools of water are filtered after use by the refinery and are the last step before being released into Fidalgo Bay.

“They’ve discovered that, holy cow, this is quite a great place to live — I don’t have to migrate to raise my babies,” Hanneman says. “The geese come in because it’s safe from predators there, and the water’s nice and clean.”

The refinery’s docks also need to be kept free of cormorants and gulls, as tankers come up to load and unload. The birds defecate on the rocks, roads and pipes, causing major sanitary and accessibility issues for the workers.

Hanneman appreciates the eight-hour day, compared with the dawn-to-dusk shifts working in agriculture, and the year-round work schedule, compared with the seasonal nature of orchards. Right now, she works three to four days a week, but scales up to seven during nesting season. 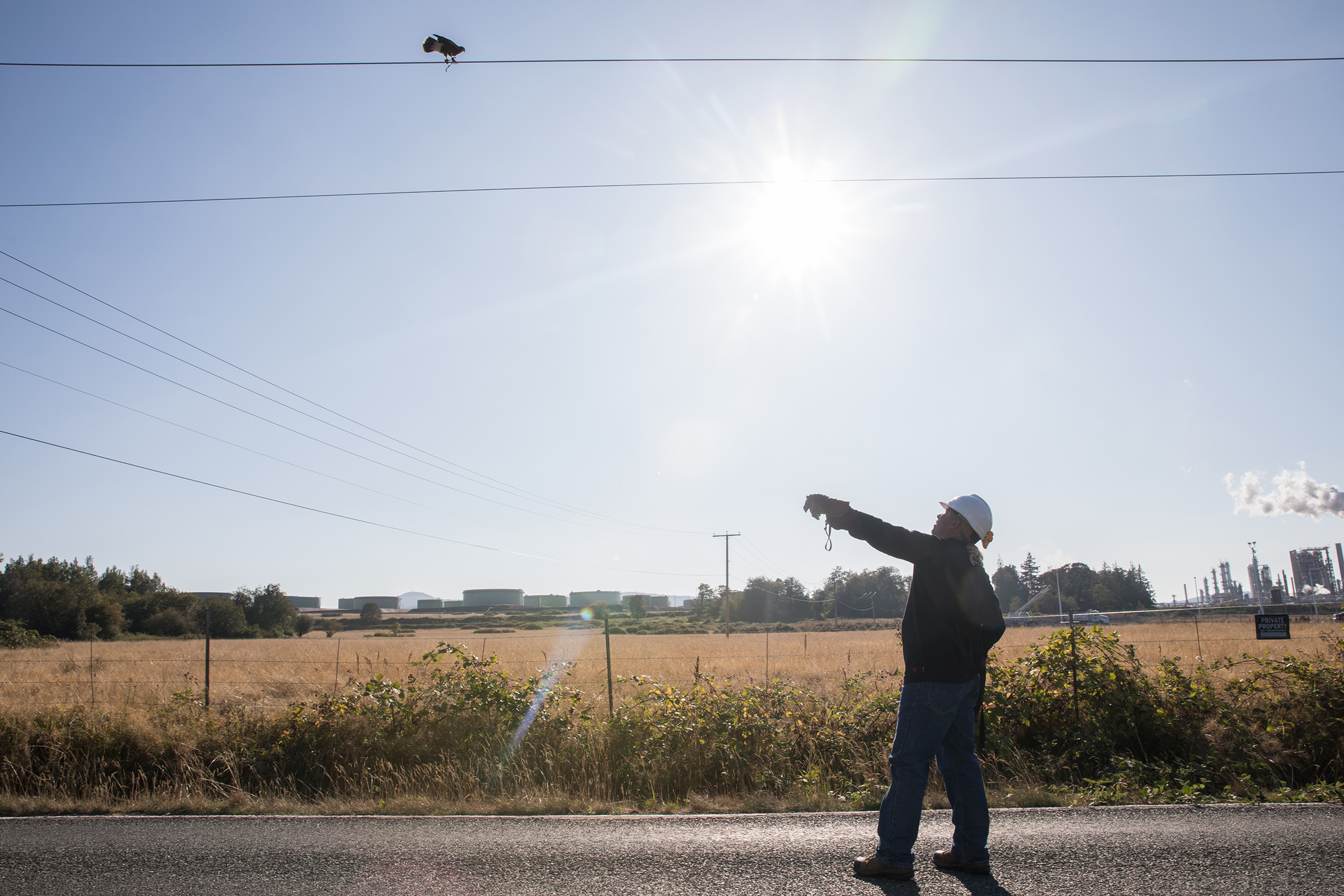 Sue Hanneman attempts to lure her Harris hawk Rizzo from a telephone pole.

Sue Hanneman attempts to lure her Harris hawk Rizzo from a telephone pole.

Not all falconers fly falcons proper: Hanneman flies Harris hawks, most noticeable for their red shoulder patches. Harris hawks are more social than falcons and can be flown in pairs. In the wild, they live and hunt in packs, and will share in a kill.

“They’re social birds, so they have a language of their own,” she says. “I personally feel they’re at a higher level.”

While Hanneman has flown her birds to abate gulls, crows, starlings and pigeons in her various work contracts, she says geese are unique in their stubbornness.

“They’re such great parents and they’re so determined. They’re big and not many things prey on them,” she says. “The eagles don’t even take them out, so it was a challenge to get them so uncomfortable that they would go nest someplace else.”

To rid the ponds of geese, Hanneman only needs to point with her finger and the hawk will fly to that spot. She takes into account the wind, how the geese will come off the water and what route the hawk might fly. When her hand is down at a 45 degree angle, the bird stays on her glove. Once she raises her arm, the hawk knows it’s time to go.

“It’s like a dog, when you say sit and you give them a biscuit,” she says. “Then once they build a bond with you, Harris hawks, they’re like your buddy. They like being with you.”

She got her first taste of falcons when she saw them in flight at a Renaissance fair. She began volunteering at the Raptor Center at the University of Minnesota, which led her to get a falconry license.

She’s now a Master falconer living in Montana, but started last season protecting crops like blueberries and grapes. It’s her job to keep at bay starlings, robins, finches, blackbirds and sparrows. Her first year was tough, she says.

“I had all new birds and I didn’t know what I was doing at all,” she says. “So it was very much a learning experience. This year has gone much smoother.”

She has eight birds at her home in Montana, but flies three owned by Felger. Although those birds don’t stay with her year-round, they respond to her because they imprinted on her after being raised from a young age by her.

Sirius, Finn and Cor are each a little over a year old. Sirius, an American peregrine falcon, is very talkative.

“He gets off, he starts flying around, and he's covering the whole field just cruising around, not really high, maybe 30 feet,” she says. “Then he'll dip down and go through the aisles. He's chasing and finding robins and finches and just chasing the heck out of them.”

Finn, a dark black peregrine falcon, is a lot flashier, she says.

“He likes to go up higher. He’ll go a couple hundred feet sometimes and circle around,” she says. “He tends to be very reckless. He hit me accidentally earlier this season.”

Cor is a peregrine who is just learning to start to go up high and chase starlings.

To reward them for a job well done, she feeds the birds tidbits of quail. They’re fed throughout the day so they aren’t tempted to attack the birds. That doesn’t always work, Leong says.

“You can’t tell them not to. This is the first year that I’ve actually had a bird catch [a starling],” she says. “So it’s not ideal because, of course, they get to eat it and that means they’re not flying for the rest of the day … because that’s a big meal.”

Agricultural bird abatement costs an average of $700 a day for farmers. Leong says it’s worth their money.

As an example, she points across the road at another blueberry farm, where she says she sees hundreds of thousands of birds.

“They just roll back and forth. It’s just amazing how many birds are over there. … The loss that [farm] must be experiencing has got to be horrendous,” she says.

A sense of pride in her work keeps her going through the long day. She loves her birds, she says, but there’s a satisfaction in protecting entire fields of crops for farmers.

“It’s a feeling of a job well done,” she says. “Especially when you make it to the end of the season and they’ve harvested everything and they’ve had a great year. You know that you’re part of the reason that’s true.” 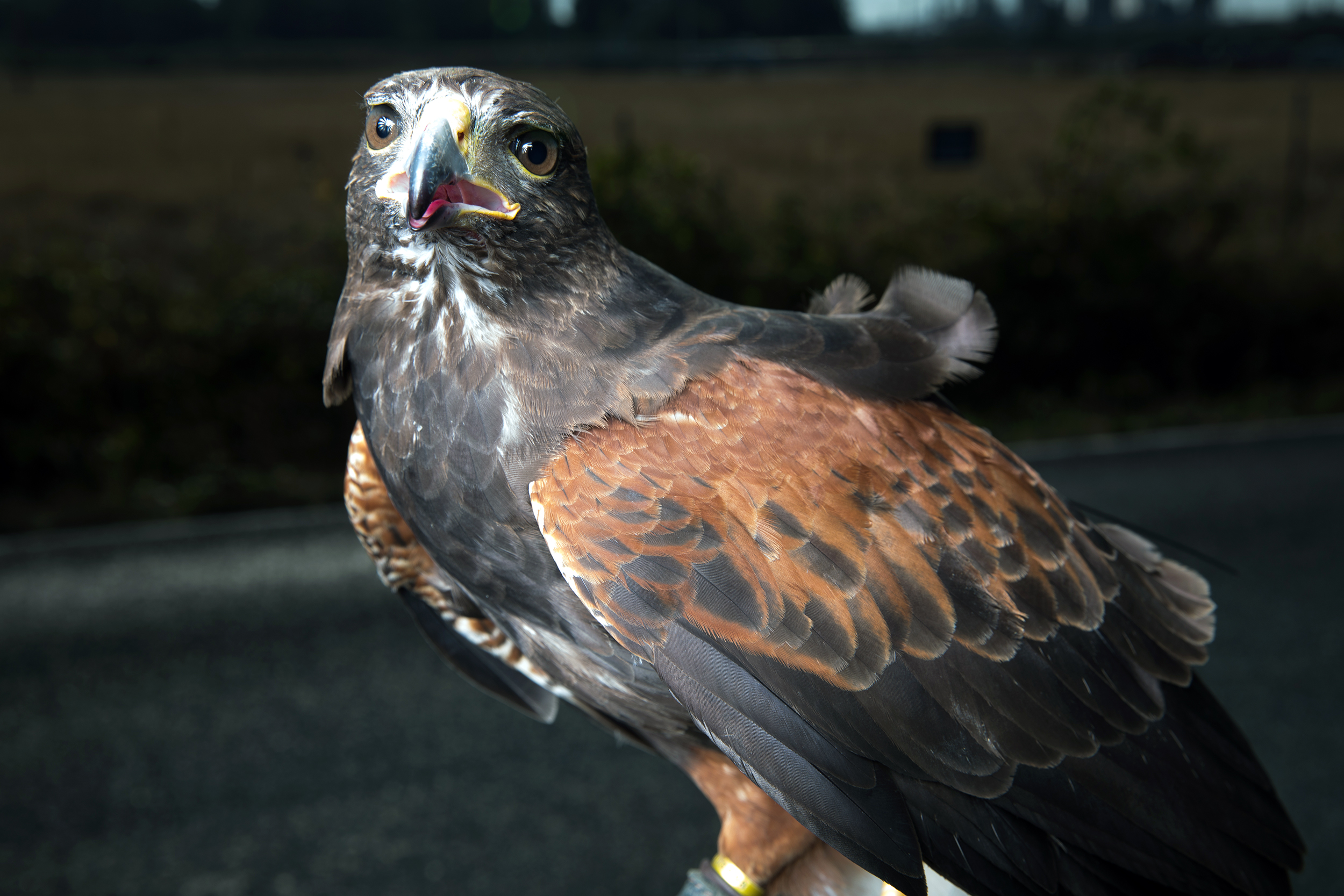