Yes, there were black slaves in the Pacific Northwest. Historians are making our region confront it

An Oregon author is exploring little-known chapters of the region's ugly, racist roots. 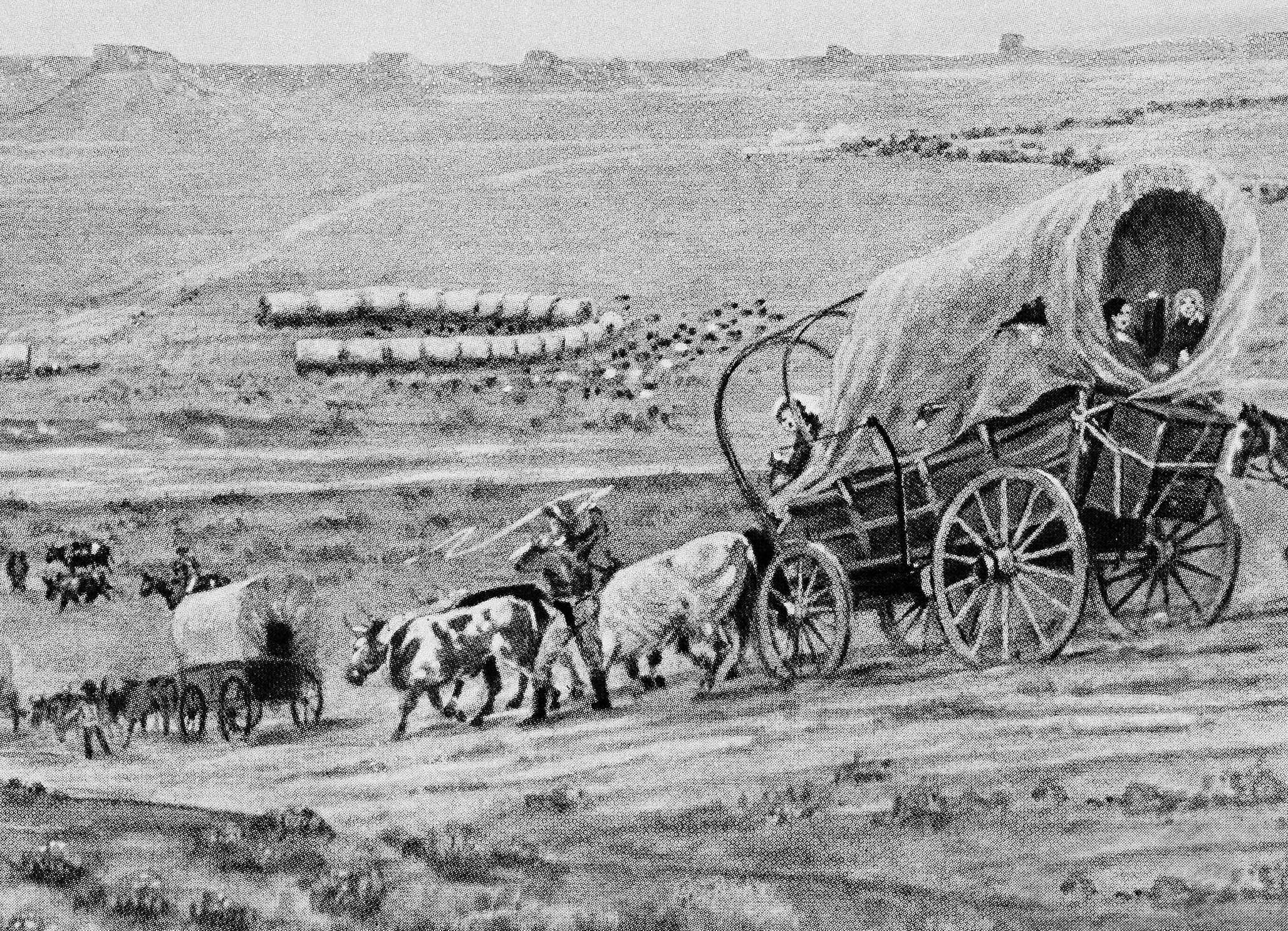 A depiction of the Oregon trail in 1844. In the 19th century, Americans expanded into the West, often with slaves who would be forced to tame the wild frontier for white slave owners. (AP)

In August, The New York Times Magazine published a special edition devoted to the centrality of African slavery in American history. Slavery “is sometimes referred to as the country’s original sin,” wrote Editor Jake Silverstein in the preamble to the magazine, “but it is more than that: It is the country’s very origin.” The Pacific Northwest is no exception. Most people are unaware that African slavery came to this region in its earliest stages and contributed significantly to our political and cultural landscape. It is part of our region’s origin, one that writers and scholars in recent years are bringing to light and asking Northwesterners, especially those of us who are white, to more fully acknowledge and reckon with.

R. Gregory Nokes is a white native Oregonian whose ancestors came out on the Oregon Trail. He traveled the world as a reporter with the Associated Press and the Oregonian. In his post-journalism retirement he has devoted himself to Oregon history, but not the kind he was taught in Portland’s public schools in the 1950s. His two most recent books are deep and sometimes shocking dives into a dark corner of our region’s past: the reality of African American slaves in the region, the people who brought them here, and those who sought to banish anyone of their race.

The story is personal for Nokes. Some years back his brother suggested he write about Reuben Shipley. Who is that? Nokes wondered. It turns out one of Nokes’ ancestors, Robert Shipley, brought with him a slave named Reuben when he came West by covered wagon from Missouri in 1853. Robert promised Reuben his freedom if he helped him start a farm in the Oregon Country. But to do so Reuben would have to leave his own enslaved family behind, which he did.

Nokes, who had always been proud of his family’s pioneer roots, was stunned. He had no idea. “Gosh, I’ve been fooled,” he says now about the history he never learned and the blank pages he’s been working to fill in. He’s not alone. Many of us brought up in the Northwest learned nothing about such things. The teaching of Northwest history in public schools has conveniently avoided or minimalized such history. Even today, recommended social studies courses that teach Washington state history are confined within a unit in fourth grade and one in middle or high school. Social studies in general must split time with geography, civics, economics, world history and other subjects. Because of this, our understanding of the region is often antiquated, shallow or utterly absent.

It was a note his grandparents wrote in a 1964 family genealogy that preserved the memory of slave ownership. Such records are rare, and tracking down Northwest slave history is difficult. Nokes says the records of wagon trains often recorded the names of men and families making the trek to the West, but slaves or servants were usually not listed, let alone named. Nokes says he now believes there might have been as many as 100 slaves in the region. Some appeared only in passing references in journals — a slave child who drowned in the Columbia River is mentioned, for example— or by first names like Tilly, Scott or Alice. There were a few known slaves, too, in what became Washington.

Nokes’ most recent book, The Troubled Life of Peter Burnett, from 2018, is the biography of a man most of us have never heard of. It documents the career of a Northwest pioneer who came on the Oregon Trail from Missouri with the legendary Marcus Whitman and became, for a time, a leading Democratic political figure in shaping the Oregon Territory. It was Burnett who composed Oregon’s infamous “Lash Law,” which stated that any freed “negroes” or “mulattos” in Oregon would have to leave or be publicly whipped until they did. It allowed slaveholders three years to free their slaves or remove them. Nokes says Oregon’s prestatehood whipping provision of the law was never enforced and was later amended to eliminate whipping. But its impact, and that of other hostile subsequent laws, was deeply felt.

While Oregon eventually prohibited slavery, it banned all Blacks, most notoriously with a provision in its state constitution in 1857 (Oregon was the only state to enter the Union with such a provision). Such moves discouraged African American settlement. News of Oregonians’ racist attitude filtered back east where men like Frederick Douglass were informed that Blacks were not welcome in Oregon Country, and word spread.

Oregon’s decision whether to be a slave state was hotly debated — freedom from slavery was not a foregone conclusion. Quintard Taylor, a University of Washington professor and founder of the website Blackpast.org, has written that many whites who came as settlers to the Northwest “considered themselves physically and psychologically removed from slavery’s debate.” But the reality was quite different. Again, Taylor: “Before 1861 most African Americans came West as slaves.” There were slave cowboys in Texas, slaves working in the California gold fields, slaves with the Mormon migration and slave servants in Oregon.

Pro- and anti-slavery debates were hard-fought and intense. Nokes writes, “To say Oregon came close to becoming a slave state would be an exaggeration. But not a wild one. There were influential leaders who wanted Oregon open to slavery.” A pro-slavery provision was defeated in a public vote, but the Black exclusion provision for the Constitution passed by a hefty margin. There were several free Blacks in Oregon who were ordered out under the exclusion law. Others moved voluntarily, some to north of the Columbia River to what is now Washington state, where there were fewer people and restrictions. Some persisted and stayed. Reuben Shipley was eventually freed; he married a former slave, had children and owned land in Oregon. He died of smallpox in Salem in 1872.

Peter Burnett eventually moved to California, where he became its first governor and worked hard to exclude Blacks from there, too, predicting a race war if they were allowed to remain. Fortunately his tenure was short and he quickly fell into political obscurity, but elements of his toxic ideas persist in contemporary manifestations of white supremacism. A resurgence has been seen in the late 20th and early 21st century as neo-Nazis and others dream of a white ethnostate in the Northwest, particularly in places like Eastern Washington, northern Idaho and Montana.

In 2013, Nokes’ previous book, Breaking Chains: Slavery on Trial in the Oregon Territory, shed light on an obscure case of a family of slaves: Robin and Polly Holmes and their children, who were brought to Oregon on the promise of freedom. The parents were eventually freed by their owner, Nathaniel Ford, but he refused to set their children free. Holmes took Ford to court for custody of his own kids and, finally, and rather miraculously, won his case in 1853.

The book gives a close-up look at the epic struggles of an Oregon slave family fighting for their rights — but Nokes also makes important contributions to our understanding of how settlers worked hard to ensure an exclusively white Northwest. Some settlers and slavery sympathizers fought to protect slaves as property in Oregon. The Donation Land Claims Act, passed by Congress in 1850 and a forerunner of the Homestead Act, arranged for Oregon’s white settlers to earn free land. Nokes notes the act specifically excluded Blacks, Hawaiians (also called kanakas), Native Americans and Asians.

One of the key promoters of the Donation Act was Oregon’s delegate to Congress, Samuel Thurston — the namesake of Washington’s Thurston County. He argued that Blacks would stir up trouble with the tribes and that intermarriage would cause all kinds of mayhem and bloodshed. If Southerners worried about slave revolts, Northwesterners worried about a Black and Native alliance. James Saules, a free Black sailor who jumped ship in Oregon, was suspected of causing trouble with local Native Americans — he was married to a Chinook woman — and is said to have been an inspiration for the Lash Law. Around 1848, Saules was publicly whipped near Astoria for an unnamed offense, despite the old Lash Law being no longer in effect. He was said to have gone insane as a result. The settlement of the region — the reason people flocked here — rested on being able to get free land by working it. The Donation Act tried to ensure that it was a whites-only proposition. If you’re shocked by the contemporary notions of a white ethnostate here, it was an original intention.

Of learning Oregon history in grade school, Nokes says, “We weren’t hearing about slavery and race and mistreatment of Native Americans.” He adds, “I was a lot naive.” He is not alone. States of the old Oregon Country — Oregon, Idaho, Montana, Wyoming and Washington — are still among the whitest in the country.

The history Nokes is documenting complicates the picture of the old pioneers and the political geography of the region. “We were supposed to be above all this,” Nokes laments. But we aren’t. It is incumbent on those of us raised on the idea that the Northwest is somehow uniquely progressive or enlightened, that we’ve nobly embraced diversity, to face our roots more honestly.  Fortunately, that is becoming easier, thanks to Nokes, Taylor and other historians doing the digging. In Nokes’ case, he might never have known where to dig had it not been for a notation in an old family tree that triggered a desire in this retired newsman to continue pursuing the fuller truth of how our home came to be.

by / June 24
Inside Crosscut