‘Atmosphere of abuse and mistreatment’: Lawmakers call for investigation of solitary confinement at Tacoma detention center

The letter, signed by U.S. Sen. Maria Cantwell and U.S. Rep. Adam Smith, also calls for the completion of the investigation into last year's death of a Russian asylum seeker. 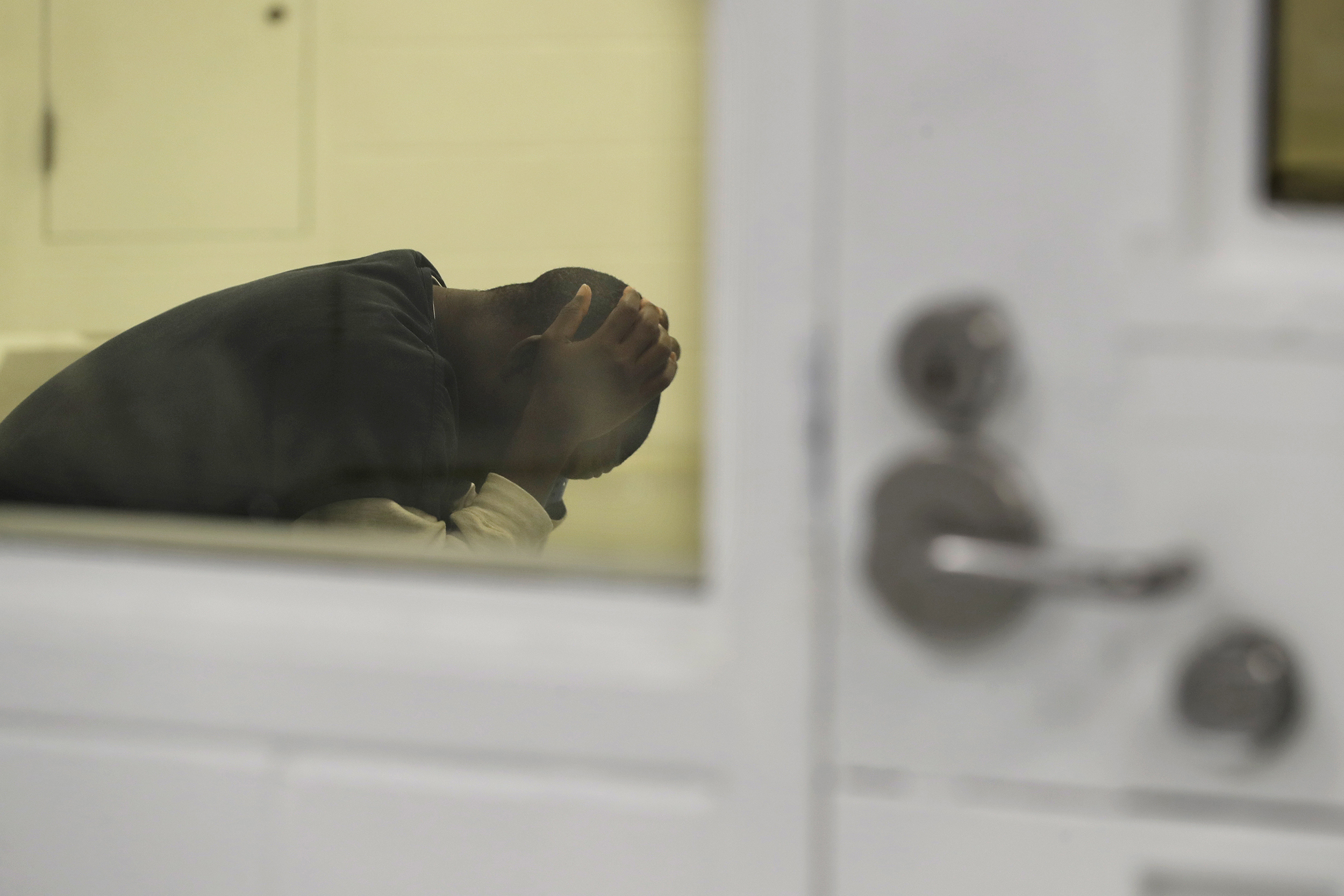 A detainee waits in a holding area during a media tour of the U.S. Immigration and Customs Enforcement (ICE) detention facility in Tacoma, Sept. 10, 2019. (Ted S. Warren/AP)

Two Washington lawmakers, in a letter sent Wednesday to the U.S. Department of Homeland Security inspector general, called for a review of the use of solitary confinement at the immigration detention center in Tacoma.

The letter, signed by U.S. Sen. Maria Cantwell and U.S. Rep. Adam Smith, both Democrats, also calls for the completion of the investigation into the death of Russian asylum seeker Mergensana Amar. Amar died by suicide nearly a year ago while being held at the Northwest ICE Processing Center, previously known as the Northwest Detention Center. He had been denied asylum and was ordered to return home.

The letter, sent to DHS Inspector General Dr. Joseph V. Cuffari, comes as detainees at the detention center complete their first week on a hunger strike to protest conditions there, activists say. The immigrant rights activists say they’ve received reports of maggots in the food, lack of medical care and other conditions.

In a statement, Tanya Roman, a spokesperson for Immigration and Customs and Enforcement, said: “Rumors of an ongoing hunger strike by detainees at the Northwest ICE Processing Center (NWIPC) are false. Failure to eat the facility provided meal is not a stand-alone factor in the determination of a detainee’s suspected or announced hunger strike action. Commissary food items remain available for purchase by detainees.”

"The kitchen and all those handling food are required to meet established governmental health and safety codes, as documented in independent, outside sources. ICE takes hygiene extremely seriously,” Roman continued.

“In general, ICE fully respects the rights of all people to voice their opinion without interference. ICE does not retaliate in any way against hunger strikers. ICE explains the negative health effects of not eating to our detainees. Additionally, for their health and safety, ICE closely monitors the food and water intake of those detainees identified as being on a hunger strike,” she said.

The letter from Cantwell and Smith also comes at a time when the national conversation on the banning of private prisons and detention centers has grown louder. Most of the approximately 40,000 immigrants being held in U.S. custody each day are in privately owned prisons.

In Tacoma, activists recently launched an effort focused on pressuring the Tacoma City Council to declare the Northwest ICE Processing Center a public nuisance and to revoke the business license of GEO Group, the company that runs the detention center.

Amar, who died in November, had been on a hunger strike for weeks. He was isolated from the jail's general population in what ICE sometimes referred to as medical isolation or voluntary protective custody.

“It is clear a broader atmosphere of abuse and mistreatment exists” at the detention center, they said.

Earlier this year, the International Consortium of Investigative Journalists, found that several hundred individuals had been held in solitary confinement at the detention center in Tacoma between 2013 and 2017.

According to ICE, the detention center was inspected earlier this year, but a report about the findings has yet to be published.

“As part of this review, we urge you to take a close look at the policies and practices related to solitary confinement and other reported abuses,” Cantwell and Smith wrote. “A thorough review by your office is critical to holding ICE and the GEO Group … accountable for the treatment of individuals.”

The inspector general found “immediate risks or egregious violations of detention standards” at the facilities that included nooses in detainee cells and overly restrictive segregation.

“At three facilities, we found that segregation practices violated standards and infringed on detainee rights,” the report said.

The Office of Inspector General could not immediately be reached for comment regarding the Cantwell and Smith letter.

In a statement about the hunger strike at the Tacoma facility, Liz Castillo, an organizer at Detention Watch Network, a national coalition aimed at abolishing immigration detention, said: “ICE’s budget continues to grow and yet, people are still dying in detention and going on hunger strikes to protest their incarceration. That should tell you that the problem isn’t the need for better conditions or bigger budgets, the problem is the agency itself and the detention system it operates.”