A new report from the University of Washington reveals at least one way immigration officials are identifying undocumented immigrants for arrest. 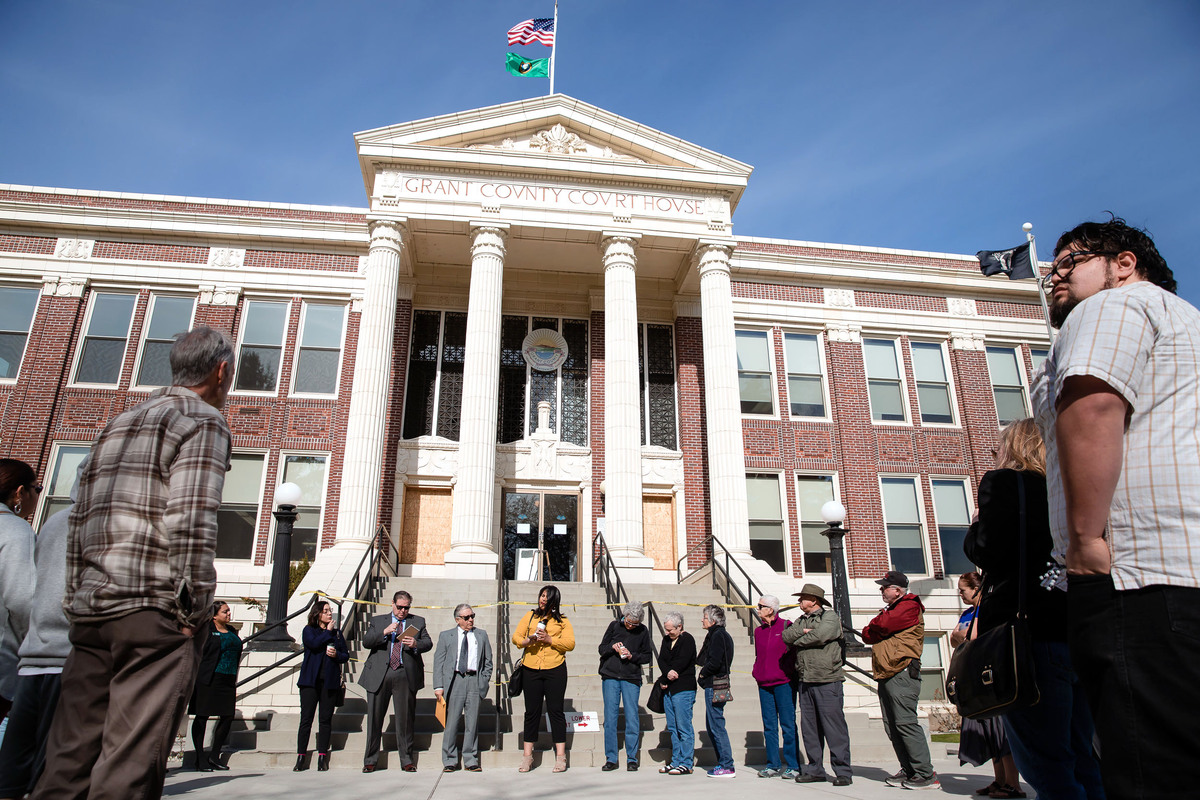 Members of various activists groups representing immigrants in Washington state outside the Grant County Courthouse in Ephrata, April 1, 2019. (Jerome A. Pollos for Crosscut)

County prosecutors in Washington are facilitating the arrests of undocumented immigrants at courthouses by sharing schedules with federal immigration officials, correspondence obtained by a University of Washington center revealed Wednesday.

Undocumented immigrants go to court for any number of reasons. Some serve as witnesses to crimes. Others show up to pay traffic tickets, answer summons or get marriage licenses. But increasingly, since President Donald Trump took office, they have been leaving in handcuffs.

To some, the arrests look like a kidnapping. The immigration agents are typically in plainclothes and driving unmarked vehicles. Agents sometimes surround courthouses and block exits while making an arrest. Although the arrests create confusion, eventually onlookers realize immigration officials are rounding up people. But how, advocates have wondered, do Immigration and Customs Enforcement and the Border Patrol know just who to target?

Emails obtained by the University of Washington Center for Human Rights through public records requests show one key avenue, which some have long suspected: Prosecutors are collaborating with ICE and Border Patrol.

While immigration agents can easily access court information online in Washington, local officials in some counties appear to have formally agreed to share information with the agents.

A coalition of groups, including several focused on curtailing domestic and sexual violence, have asked the state Supreme Court to stop courthouse arrests and prevent prosecutors from sharing information with immigration officials. Ann Benson, senior directing attorney at the Washington Defender Association, said the spike in arrests by immigration authorities "is dramatically impacting the ability of Washington’s immigrant communities to access justice in our courts.”

“Victims of violence cannot get protection, defendants cannot defend against criminal charges and people cannot access essential court services such as getting marriage licenses,” Benson said. “These enforcement actions are unnecessary and harmful to our communities. It does not have to be this way.”

“Tom, it was great meeting you and the fellas today," Dano wrote Watts on Jan. 24, 2018. "Look forward to your help here in Grant County."

“It was great meeting you today as well," Watts replied. "I look forward to working together in a mutually beneficial relationship.”

Following the meeting, Watts sent Grant County employees email addresses of several Border Patrol officers, who, he said, “will be heavily involved in the day to day docket review.” The next day, emails show, employees in his office began to forward schedules for the Moses Lake and Ephrata courthouses to Border Patrol agents.

About a month later, on Feb. 14, 2018, Watts wrote to Deputy Prosecuting Attorney Chad A. Jenks, “Just wanted you to know we have picked up three already this week. This program is a success, I feel. In addition, we’ve developed several targets off [sic] criminal aliens that have skipped their court dates. We’ll get them as well. :)”

Dano referred to Jenks’ message as “great news.” Jenks, in turn, said he was “glad to hear the laws are being enforced.” Later, on Feb. 23, 2018, Watts replied to an emailed court schedule with another update: “By the way, we picked up three more yesterday morning. It’s been fun. :)”

The Grant County Sheriff’s Office and the Grant County Prosecuting Attorney’s Office sent emails directly to ICE Deportation Officer Jaimie Waite regarding individuals’ court dates that included details about their cases. In one email, Sgt. Greg Knutson of the sheriff’s office wrote to Waite: “Yo homie.” Knutson proceeded to tell Waite about someone he had just booked with a prior deportation order.

Dano’s office said he was unavailable for comment, while Adams County officials did not respond to requests for comment regarding their cooperation with immigration officials. Border Patrol and ICE officials said courthouses, unlike schools and churches, are not considered sensitive locations. The agencies said officers prioritize targeting immigrants who have a criminal history or are viewed as threats to public safety.

Tanya Roman, a spokesperson for ICE in the Pacific Northwest, said the arrests have become necessary because local law enforcement agencies have increasingly refused to hold people in jail for immigration officials or honor the agency’s detention orders.

Studies show that courthouse arrests have already dissuaded some immigrants from reporting abuse. In May 2019, a coalition of organizations working to end domestic violence, sexual assault and human trafficking released a survey of advocates and attorneys. Approximately 60% reported that survivors of domestic violence and sexual assault were increasingly contacting them with concerns about their legal status; three out of four advocates surveyed reported that “immigrant survivors have concerns about going to court.”

In a 2017 national survey of judges, which included Washington, 54% reported that cases in their court were interrupted because immigrant victims were afraid to come to court — up from 45% in 2016.

Legislation Gov. Jay Inslee signed into law earlier this year prohibits local law enforcement from working with federal officers for immigration purposes, and immigrant rights advocates have petitioned the state Supreme Court to put a stop to both courthouse arrests and prosecutors’ collaboration with immigration officials.

“Making courts inaccessible undermines public safety for everyone,” said the Washington Defender Association’s Benson, whose organization joined the Washington Immigrant Solidarity Network, Columbia Legal Services and others in asking the Supreme Court to block the arrests.

The petitions call for the Supreme Court to adopt two new rules for Washington courts. One would prohibit arrests at courthouses without a warrant, while the other would prevent lawyers in the state from sharing someone’s personal information for the purposes of immigration enforcement.

Earlier this year, in the first judicial decision of its kind in the country, a judge in Massachusetts halted courthouse arrests after public defenders and two district attorneys sued ICE.

Regarding prosecutors’ collaboration with ICE and Border Patrol, Enoka Herat of the American Civil Liberties Union of Washington, whose organization joined in the petition to restrict ICE access to state courts, said: “I think it very much calls into question prosecutors’ ethical duties to people in the community.”

“The harm that this is causing, it’s almost immeasurable. It’s really targeting people who are doing the right thing,” Herat said.

Jorge Barón, executive director of the Northwest Immigrant Rights Project, whose organization also helped with the petition, said the practice raises questions about whether prosecutors are racially profiling clients, focusing on people with Latinx sounding names or on those who speak Spanish.

State Supreme Court Justice Mary Yu said she expected the proposed rules to go before the full court in November. Because of the organizations’ request for an expedited process, the court would then immediately rule on whether to publish the rules for a shorter than usual 60-day comment period before a vote.

Yu said she thinks the proposed rules are necessary because two letters from Chief Justice Mary Fairhurst to the Department of Homeland Security and Border Patrol have been largely ignored.

“Doing this kind of rule, or pushing it, is only because we haven’t had a response with a gentle request from the chief,” Yu said.

“Maybe it’ll stop, maybe not,” she continued, “but I don’t know what else we can do.”