On the edge of the North Cascades, fear dominated the conversation as hundreds gathered this week to debate grizzly bear reintroduction. 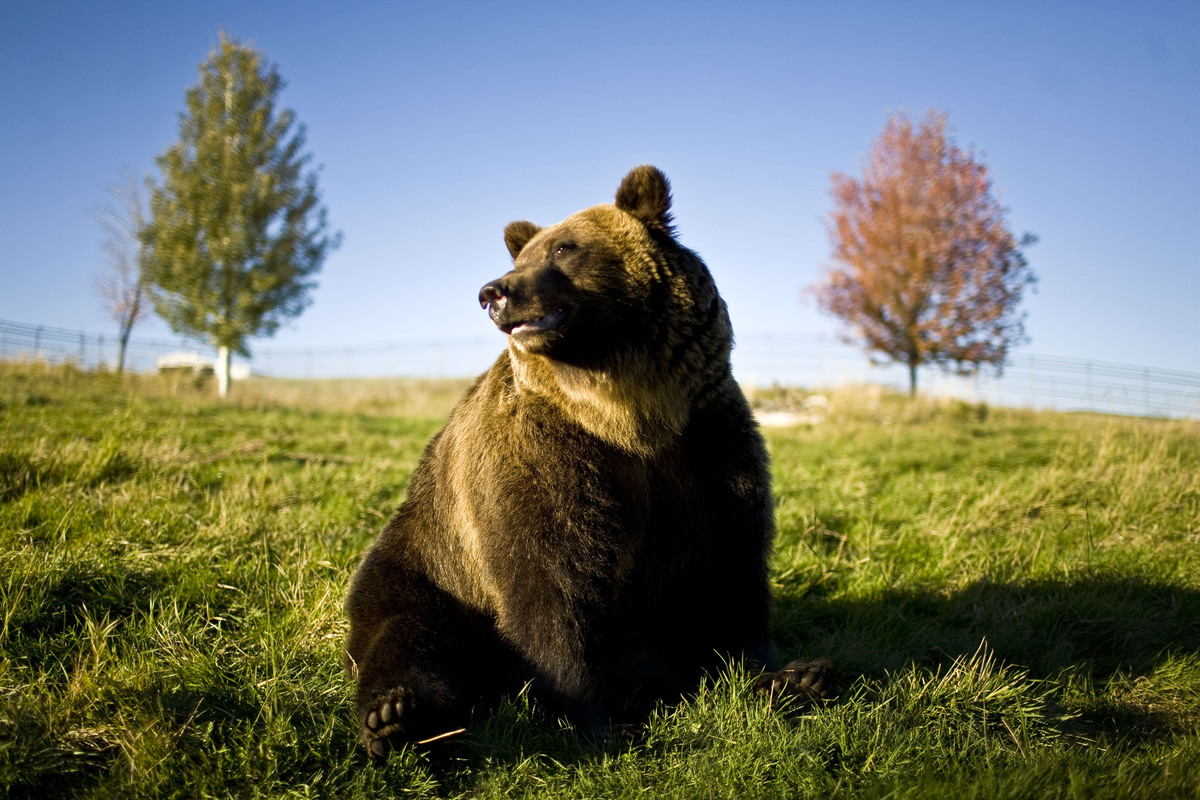 In this 2010 file photo, bears are allowed to roam and forage in the 2.2-acre exercise yard connected to the Bear Research Center on the campus of Washington State University in Pullman. (© Matt M. McKnight)

It’s been four years since the federal government initially started asking Washington residents whether they would like to see more grizzly bears brought into the state. And still, the heated debate continues.

Around 450 people filed into the AgriComplex building at the Okanogan County Fairgrounds Monday night. They wanted to voice their opinions on a draft plan to relocate grizzlies to the North Cascades.

U.S. Rep. Dan Newhouse, R-Sunnyside, whose large Central Washington district includes the North Cascades region, had pushed for another opportunity for his constituents to comment on the potential reintroductions. That came after a series of public meetings and an earlier comment period.

Newhouse said this meeting was a “huge opportunity, no matter where you stand on this issue.”

“I think you all know where I stand on this issue,” Newhouse told the crowd. “I don’t think the science supports it. I think it’s against state law. I don’t think the local communities want it.”

To that, people in the crowd whistled and cheered.

'A recipe for disaster'

For three hours after that, 62 people spoke about why they did or did not want grizzly bears in the North Cascades. Each person was selected from a lottery drawing, and each had two minutes to speak. Most in the room said they did not want more “apex predators” in their backyard.

Alta Lake resident Michael Zoretic said he was worried about the burden grizzlies would pose to people’s safety.

“We’re talking about an 800-pound animal that has — what? — 6-inch-long claws. That is a recipe for disaster for hikers and hunters and people just going out with their dogs for walks,” Zoretic said.

To that the crowd raised their arms in support, waving their hands for emphasis. They had been asked not to cheer or applaud, although they often clapped in support or booed and murmured their disagreement.

Many ranchers in the crowd said they worry about adding another large predator that would look at their livestock as food. Dave Dashiell, a rancher in Stevens County, said he’s concerned grizzly reintroduction will end up like wolf conflicts: in his estimation, not well.

“I can’t imagine the grizzly thing being any better. It might even be a bigger train wreck,” Dashiell said. “It’s always your fault when something goes wrong. It’s never the predator’s fault. It’s always the producer.”

Some conservationists were sprinkled throughout the crowd. Jasmine Minbashian of the Methow Valley Citizens Council lives near the area where bears could be reintroduced. She brought along a list of other Methow Valley residents who wanted to see the grizzlies brought back.

“Living next to this big, wild place, we have a responsibility to be good stewards of that wild place. That includes keeping all the parts, even if those parts have big teeth and claws,” Minbashian said. “There’s also a lot of fear. I understand those concerns, but a lot of those fears are overblown.”

Many supporters spoke of their experiences with grizzlies, like wheat grower Matt Rudolf, who said he had “experienced grizzlies in seven different habitats.”

“I want to restore the grizzly because ecosystems that have the grizzly have been proven to be better,” Rudolf said. “I think we’re strong enough as a species that we can coexist.”

Once numbered in the thousands

Biologists say there are only a handful of grizzlies left in the state — so few that one man who’s studied grizzlies his entire life has yet to see one in Washington. Scientists say that if something isn’t done soon, the bears will disappear from the state for good.

“The likelihood of the [grizzly] bears recovering in the North Cascades on their own is very, very small. In fact it probably isn’t going to happen,” biologist Bill Gaines said in an earlier interview.

Biologists say grizzly bears in the North Cascades once numbered in the thousands. They were wiped out from fur trading, hunting and habitat fragmentation.

Records from the Hudson’s Bay Company indicate that in the mid-1800s trappers traded nearly 4,000 grizzly hides through forts in the area — although not all of those pelts may have come from the North Cascades.

That’s why the federal government drafted a variety of plans to help save Washington’s grizzlies. The four options range from doing nothing to slowly reintroducing 25 bears to the North Cascades over a decade. Under the different plans, bears would be brought in from British Columbia and Montana, which also has dealt with controversial grizzly reintroductions.

If this proposal does move forward, it could take up to a century for the Washington grizzly population to reach the ultimate goal of 200 bears in the North Cascades.

'Supporter of the great bear'

Federal officials originally received more than 126,000 public comments on the draft plans after a series of public hearings. The plans gained backing from former Interior Department Secretary Ryan Zinke, a Montana native who said he was a “supporter of the Great Bear.”

In a surprise visit in March 2018, Zinke said to a small crowd in Sedro-Woolley, Skagit County, that he wanted to make sure the process was done right.

Under Zinke, the reintroduction efforts appeared to gain momentum. A 30-year effort to bring grizzlies back to the North Cascades had suffered from fits and starts.

But shortly after Zinke’s visit to the region, Newhouse, the Washington congressman, sought to deny funding to any translocation of bears into the state. The bill eventually failed.

Initially, Interior Department officials hosted six scoping meetings in 2015. They held eight public hearings and two webinars on a draft environmental impact statement in 2017, including hearings in Omak and Winthrop in Okanogan County.

Federal officials also provided informal updates at 70 other meetings across the region, including with tribes, elected officials and interest groups, like cattlemen, conservation organizations and recreationists.

The federal government had planned to make a decision on grizzly reintroduction by the end of 2018. But the plans stalled after Zinke resigned as interior secretary, and amid pushback from Newhouse and others concerned with reintroduction.

Additional public comments are now being accepted through Oct. 24.