A new rule, set to take effect Dec. 2, would make it more difficult for green card holders to apply for U.S. citizenship. 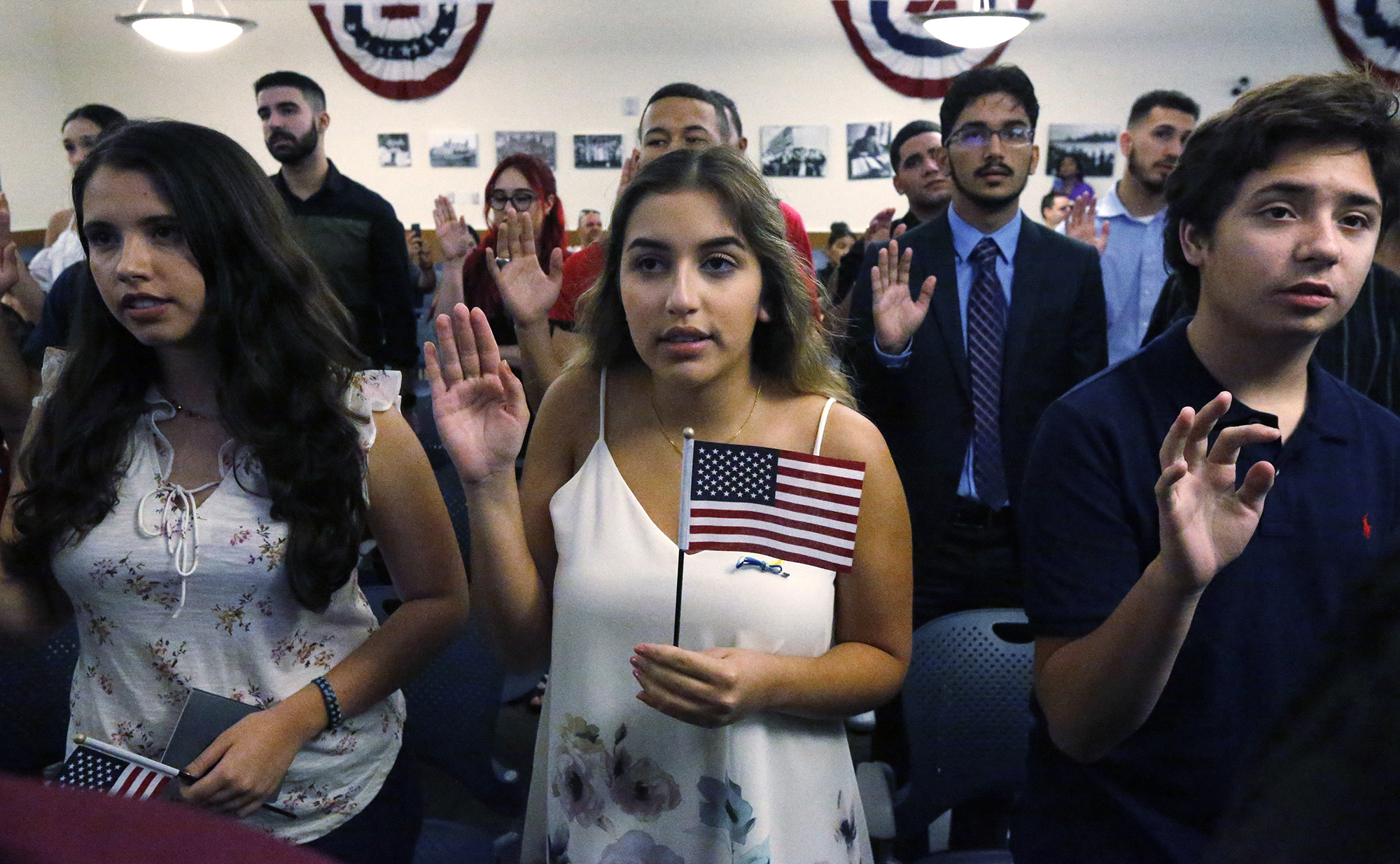 Ericka Ames, 18, of Nicaragua, center, recites the oath of allegiance during a naturalization ceremony at the U.S. Citizenship and Immigration Services Kendall Field Office, Aug. 30, 2018, in Miami. A total of 101 citizenship candidates from 15 countries took the oath to become American citizens during the ceremony. (Wilfredo Lee/AP)

The city of Seattle joined nonprofits and immigrant rights groups across the country in suing the Trump administration Tuesday over what they describe as a “wealth test” for immigrants to become U.S. citizens.

The 50-page lawsuit, filed in U.S. District Court for the Northern District of California, names the Department of Homeland Security and U.S. Citizenship and Immigration Services, as well as DHS Acting Secretary Kevin McAleenan, as defendants.

Under the current rule, immigrants who have had a green card for at least five years can show proof that they’ve used public benefits, such as Medicaid, food stamps or Supplemental Security Income, in order to qualify for a fee waiver. The new rule would mean that immigrants would no longer be able to simply show proof they have used public assistance. Instead, they would need not just a copy of their tax return, but transcripts of their taxes, which are essentially stripped-down summaries of tax returns. Ordering transcripts of taxes requires an email account, a credit card, a mobile phone in applicant’s name and other financial records that advocates argue are often out of reach for low-income people.

“The American promise must be open to all,” Mayor Jenny Durkan said in a statement. “Wealth is not and should never be a requirement of being an American citizen.”

“We believe in an America that welcomes immigrants and supports people in seeking their citizenship and right to vote regardless of race, national origin, class or economic status,” said Rich Stolz, executive director of OneAmerica.  “Unfortunately, this action and others taken by the administration serve to create a two-tiered immigration and naturalization system — a ‘fast track’ for the wealthy and a much more difficult path for everyone else.”

Advocates in Washington also point out that naturalization cases are already being transferred away from Seattle to Citizenship and Immigration Services offices in Yakima and Portland, requiring applicants to drive up to three hours for their appointments.

The new rule would also put those who earn too little to be required to file taxes in a difficult position. In a comment about the proposed rule change submitted by Seattle’s Office of Immigrant and Refugee Affairs, Director Cuc Vu wrote: “If they have no earned income, this could amount to a Kafkaesque process starting with months of waiting for proof from the IRS that they in fact have no income to report, then filing this lack of income with the IRS, only to prove to U.S. Citizenship and Immigration Services what could have previously been proven with a simple letter from a benefits-granting agency.”

Vu accused federal government officials of showing disdain for poor people. Citizenship and Immigration Services argued, for example, that those who do not qualify for a fee waiver can instead simply renew their green card.

In a statement about the rule change, Citizenship and Immigration Services said it “has determined that receiving a means-based benefit is not an appropriate criteria in reviewing fee-waiver requests because income levels used to decide local assistance eligibility vary greatly from state to state.”

In the lawsuit, advocates argue the federal government fails to provide any data to back up this claim.

In the lawsuit, advocates argue Citizenship and Immigration Services has “diverted staff from conducting naturalization interviews and has proposed to transfer more than $200 million of its fee revenue to Immigration and Customs Enforcement.” This, plaintiff lawyers argue, suggests “a priority of preventing, rather than facilitating, immigration and naturalization.”

Lawyers also assert the Trump administration has more aggressively pursued denaturalization cases — the process for stripping naturalized citizens of their citizenship — even announcing plans for a new denaturalization “task force.”

“Prior to this administration, denaturalization … was reserved for individuals who committed extremely serious crimes, such as war crimes. In the past two years, denaturalization filings have doubled,” plaintiff lawyers wrote in the lawsuit.

The rule change comes at a time when the Trump administration has already faced considerable criticism for what some say are the federal government’s attempts to keep poor immigrants out.

Another proposed rule change, the so-called “public charge” rule, would make it more difficult for immigrants who use public assistance to gain green cards. Federal judges in three states — New York, California and Washington — temporarily blocked the rule before it took effect Oct. 15. Another rule under consideration would charge a fee to asylum applicants and certain individuals who arrived in the country as children.

Experts say approximately 2.5 million legal permanent residents who are eligible to naturalize are at or below 150% of the federal poverty line. In King County alone, about 75,000 residents qualify for citizenship, approximately half of whom could qualify for a fee waiver.

“The cruel irony is that naturalization has been proven to raise people’s wages,” said Sarah Sumadi of OneAmerica, who works with green card holders.

In addition to having the ability to vote, run for office and other civic benefits, those who gain citizenship tend to enjoy an estimated 8% to 11% pay bump, experts say. A decline in naturalization would also negatively impact the state’s economy. OneAmerica estimates that “if even 94 Washington state residents were to fail to naturalize as a result of the 2019 rule, the state would lose more than $1 million in future spending and revenue.”

In the lawsuit, plaintiff lawyers include a long list of comments about immigrants that President Donald Trump has been criticized for, including labeling Mexican immigrants as criminals and rapists and referring to Latin American and African countries as “shithole countries.”

Advocates have asked the court to block the new few waiver rules from going into effect as scheduled. The administration is expected to respond to the lawsuit in coming weeks.

This story has been updated to correct the day the lawsuit was filed.