The welded steel drop boxes got their start in the Puget Sound area, but are now in demand across the country. 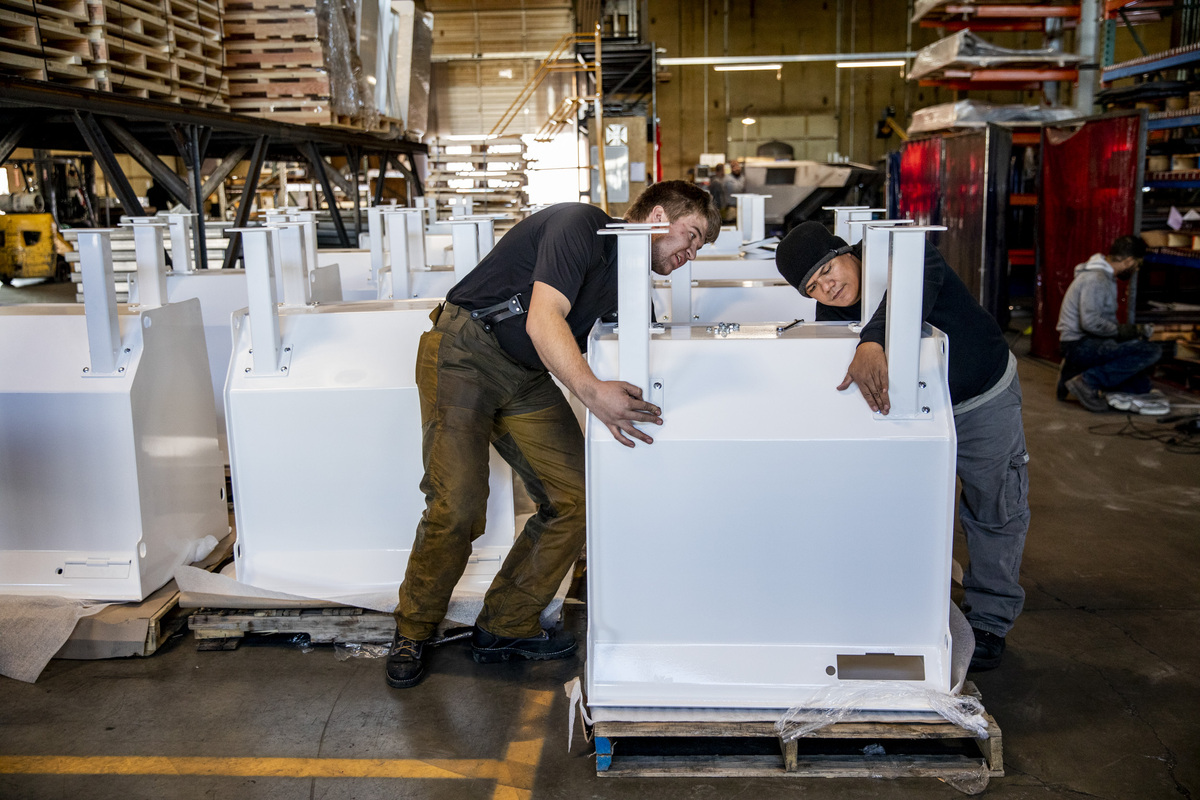 The SUV barreled into the ballot drop box in Lacey at a particularly inopportune time.

It was the day before the Aug. 6 primary election, and voters’ ballots had already been piling up inside the collection box by City Hall.

Elections officials, however, had planned for this. Though the impact knocked the steel box on its side, workers were able to prop it up and return it to service.

"There was not a dent,” said Thurston County Auditor Mary Hall, who oversees the county’s elections. “As soon as we found out about it we went and emptied the ballots. It was fine.”

The ballot boxes many Washington counties use didn’t end up tanklike by accident. In recent years, elections officials in the state have played a leading role in developing extra-thick ballot boxes that can withstand car crashes, fires and good old fashioned attempts to crowbar them.

Washington voters will soon begin filling them again, as ballots for the Nov. 5 general election are scheduled to be mailed this week.

The efforts to strengthen the ballot boxes date back to 2010, shortly before Washington lawmakers started requiring all counties to move to a vote-by-mail system. With the abandonment of in-person polling places, the ballot drop boxes provided a way for people to still vote until late on Election Day without having to worry about whether the U.S. Postal Service would collect and postmark their ballot in time.

Yet a box full of nothing but ballots — and clearly marked as such — could also be a target for those looking to tamper with elections, local officials realized.

As Pierce County prepared for its first all-mail election in 2011, county Auditor Julie Anderson and her elections team decided they wanted to use something sturdier than a typical blue mailbox. That was particularly important since ballots wouldn’t be picked up every day during the election cycle.

Anderson got an idea. She reached out to a local metal fabrication company, Laserfab Inc., to design a box that would address what voters saw as the biggest potential security concerns — someone reaching in and stealing ballots, setting the ballots on fire, or even problems as simple as the ballots getting wet from the rain.

After a few months of exchanging ideas, the county and the company came up with a ballot box composed of quarter-inch-thick steel weighing about 600 pounds. (The newer, larger versions weigh about 1,000 pounds.) The metal is welded or folded at each corner, leaving no seams that can be pried.

Pierce County deployed the boxes for the first time in advance of the November 2011 election. Since then, elections officials there have added more than 20 boxes.

“It just makes me feel good that the citizen who is dropping off their ballot can actually pound on it and feel like it’s substantial,” Anderson said during a recent interview at Pierce County’s election center, as she showed off an example of one of the ballot boxes. Besides being car-crash resistant, Anderson said, “a tree falling on it is not going to hurt it.”

Kyle Haugh, a county elections specialist who manages the drop boxes, seconded that. “It’s going to hurt the tree,” he quipped.

Since Pierce County began using the boxes, word of mouth about them has spread, said Larry Olson, vice president of Laserfab, which makes the ballot boxes at its facility in Puyallup. After starting out building fewer than two dozen ballot boxes for Pierce County, the company now has about 540 in the field across seven states, he said.

In addition to Thurston County, King County has since started using the boxes, as has Oregon’s Multnomah County, where Portland is located. Election officials in Denver and parts of Alaska have become customers, too.

“It really is constructed in a way that it would be hard to introduce anything foreign in the box,” said Alton Dillard, spokesman for the Elections Division of the Denver Clerk and Recorder’s Office. For instance, the slots for inserting ballots are narrow and tilted at an angle, which Olson said “makes it more difficult for somebody to come by and tip in a liter of Diet Pepsi into the slot.”

Denver election officials started out with 13 of the ballot boxes in 2012, and have added 20 more since then, Dillard said.

Olson said his company never would have thought of making ballot boxes until Pierce County elections officials reached out. He said new orders for the ballot boxes — a product line the company has dubbed Vote Armor — are now rolling in from California.

Anderson said she has heard from some counties that the Vote Armor boxes might exceed the amount of security they need, or that they can’t easily afford them. For Pierce County, each box costs between $4,500 and $6,000 to purchase. Including installation, the total cost ranges between $7,000 and $10,000 per box, Anderson said.

Yet even some counties that employ different types of ballot boxes have borrowed other security ideas from Pierce County. One of those was using chemical fire suppressants inside the drop boxes to ensure ballots don’t go up in flames.

Anderson said firefighters in Pierce County helped put the fire suppression system to the test, tossing lit cigarettes inside, as well as pouring in gasoline and lighting a match. While a couple of the test ballots got singed in the process, they were still legible.

Mason County Auditor Paddy McGuire said he initially tried to crawl inside the county’s ballot boxes to install the fire-suppression system, but had to find another, smaller volunteer to do the job. (“Drop boxes are not designed for full-sized human beings to climb inside,” he recently said of that effort.)

“One of the things in election administration is you try to imagine all the crazy things people might do, whether it be voters or malicious actors who want to foul things up,” McGuire said.

“You try to anticipate everything you can.”