Seattle PACs spent $4 million on the election. Who got paid?

The committees spent heavily with out-of-state companies, flooding the city with mailers and canvassers. 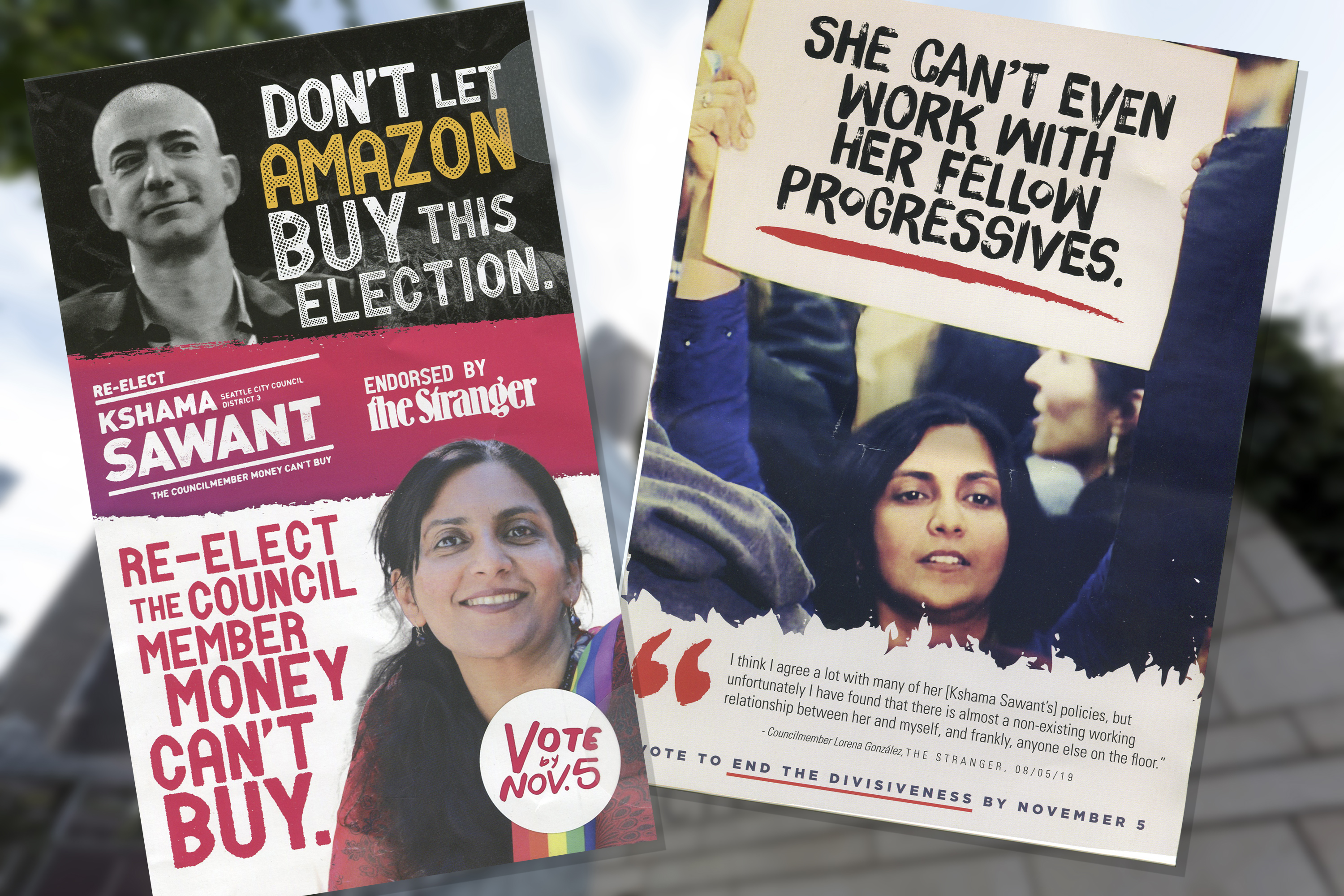 Mailers for and against Councilmember Kshama Sawant.

Seattle’s election was good business for those in the election business.

In the run-up to last week’s general election, political action committees spent more than $4 million to influence the seven races for Seattle City Council seats. That’s about 60% of all money spent in those races — campaigns and PACs operate independently of each other — and more than five times the PAC spending in 2015, the last time a majority of Seattle City Council seats were up for grabs.

Where did all that money go?

The biggest winner in the PAC sweepstakes was California-based Zero Week Solutions, a political consulting firm that provides paid canvassers to those who want them. The Seattle Metropolitan Chamber of Commerce’s PAC — Civic Alliance for a Sound Economy (CASE) — spent nearly $1 million on Zero Week Solutions canvassers, who fanned out on behalf of Heidi Wills, Egan Orion and other chamber-backed candidates. The $929,750 that the chamber’s PAC spent on the firm was more than double what any other election-based company garnered between the primary and the general election.

The next three highest-grossing companies were also hired by CASE, which itself was funded in large part by Amazon, as well as Expedia, Vulcan and other big names of local business.

CASE paid Moore Campaigns, a Washington D.C.-based political firm, just over $400,000 for campaign mailers. The PAC also hired Screen Strategies Media of Virginia at just over $300,000 for television advertising. And it paid EMC Research, which has an office in Seattle, about $240,000 for research and polling.

Screen Strategies Media scored an extra $225,000 from the People for Seattle PAC, which backed the same candidates as CASE.

Progressive PACs were good business, too, although they spent much less than CASE or People for Seattle. The Civic Alliance for a Progressive Economy (CAPE), paid Break Something, a Washington, D.C., political campaign firm, $165,000 for its help.

The PAC for the hotel workers union Unite Here Local 8 paid its own members over $100,000 to canvass on behalf of Andrew Lewis.

Taken together, where PACs chose to spend money highlights which strategic calculations — and, perhaps, miscalculations — the big-money committees made in this year’s election.

The six largest PACs — CASE, CAPE, People for Seattle, Unite Here Local 8, Moms for Seattle and the Seattle firefighters’ committee — combined to spend about $1 million on designing, printing and mailing flyers, brochures and magnets. That’s tens of thousands of pieces of paper landing on doorsteps across the city.

PACs also bought about $1 million in paid canvassing — mostly thanks to CASE’s work with Zero Week Solutions, but also from Unite Here on behalf of Lewis.

Patrick Schoettmer thinks the money directed toward mailers could probably have been better spent elsewhere.

“At the very top of what’s ineffective is mailers,” the political science instructor at Seattle University said. “It might be more effective in vote-by-mail because you have to constantly needle people to turn in their ballots,” he added. But in general, “the money that was being put into mailers was probably not the most effective use of campaign dollars that we could have seen.”

However, mailers are cheap. By contrast, face-to-face interactions are expensive without an organic base of volunteers, but they are seen as the best approach for actually persuading voters to back a specific candidate.

Jake Grumbach, assistant professor of political science at the University of Washington, said having a conversation with a person at your door humanizes certain issues and politicians. “It’s just much more expensive to pay for canvassers to have those face-to-face races, even if it is more effective,” he said.

Television ads continue to consume a significant amount of outreach resources for PACs.

“The thing about TV is that it’s still the main information source for older voters,” Schoettmer said. And older voters vote.

Still, “research is suggesting that TV has become less effective,” said Grumbach. And in district races, it’s difficult to target the ads to specific voters.

In future elections, the flow of money from PACs could be limited in Seattle. Councilmember Lorena González is pushing new legislation that would limit the ability of PACs to accept corporate contributions. It’s a proposal that’s sure to face legal challenges but, if successful, would reshape the next round of municipal elections.

The two PACs that spent the most — CASE and People for Seattle — saw most of their candidates lose. Some blame is falling on Amazon and the splash the tech giant made by writing its last-minute check to CASE, but there’s also a recognition those campaigns had a worse ground game, especially when compared with the one overseen by the reelection campaign of Councilmember Kshama Sawant.

Sawant — who received negligible support from PACs — and her campaign didn’t need to pay canvassers because they had plenty of willing volunteers. And that broad base of support may help explain her sharp uptick in support in the late-counted ballots that delivered her a 2,000-vote victory, despite trailing in initial vote counts.

“Whatever one says about Councilmember Sawant, what her team has perfected is the mobilization of workers who do all that ground game,” former Mayor and Councilmember Tim Burgess, who’s on the committee for People for Seattle, told Crosscut earlier this week.

Seattle University's Schoettmer said that, in the primary, the money served to bolster certain candidates. But, he said, in the general election, he questions why money was being spent in the way it was on races that were not, ultimately, very competitive — as in the council's Districts 1 and 2. “When it comes to the general election, the money that was being spent I don’t know that it was necessarily spent in a way that would be deemed best practices,” he said.

Correction: A previous version of this article misspelled Patrick Schoettmer's name as Shoettmer.