Plus, what we learned about Amazon, party loyalty and the perceived liberalism of voters. 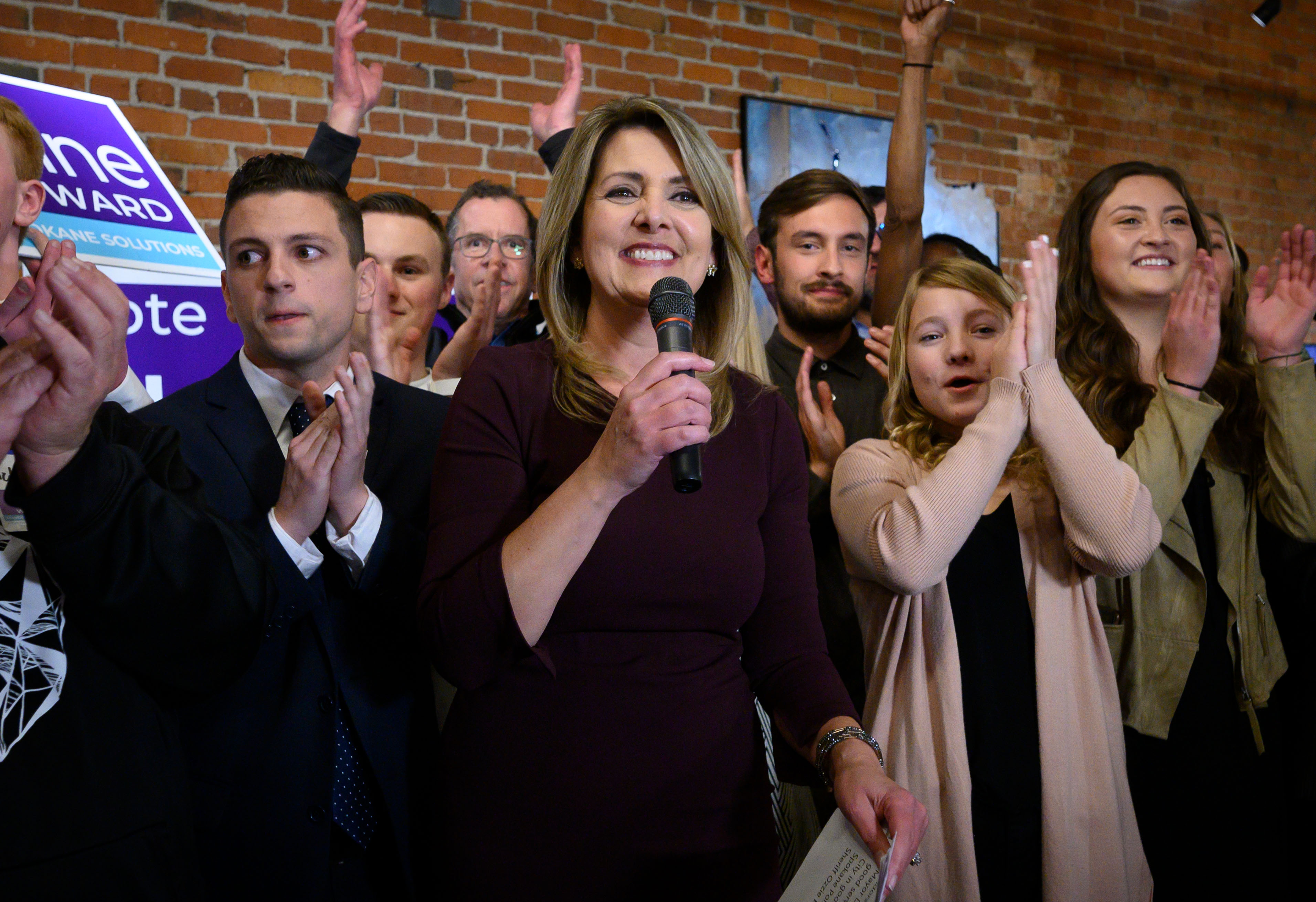 Nadine Woodward, a former TV anchor, was elected mayor of Spokane last week. She ran on a platform that lambasted the city's failure to deal with homelessness. (Colin Mulvany/The Spokesman-Review)

A powerful corporate interest gives an unprecedented amount of campaign money in an effort to change the direction and tone of city government. The donations raise eyebrows and controversy and become a campaign issue for embattled progressives. But when the returns roll in, the strategy appears to have worked and government swings toward the political center — in Spokane, not Seattle. The powerful interest group: the real estate industry, not Amazon.

The city of Spokane is actually quite liberal, sending Democrats to the legislature and voting easily for Barack Obama, Hillary Clinton and former state Sen. Lisa Brown for the U.S. House of Representatives over the incumbent, Cathy McMorris Rogers.

But Nadine Woodward, a former TV anchor making her first run for political office, made the city’s failure to deal with homelessness the focus of her campaign, running on a tough-love platform that clashed with the status quo defended by Spokane City Council President Ben Stuckart. An outspoken progressive, Stuckart conceded after the first returns came in. Two new conservative-leaning council members may join Woodward, changing the tone of city government.

That didn’t happen in Seattle. After being down by 8% after two vote counts on Tuesday and Wednesday, Councilmember Kshama Sawant shocked just about everybody by seizing the lead late Friday to keep her job over challenger Egan Orion. Come January the new council will likely be more left wing than the current council, whose priorities and performance catalyzed the corporate campaign to replace it.

The easy observation is that Amazon’s $1 million donation to tip the council races blew up in their face. The more interesting question is: Why? One voter told a local reporter that Amazon’s money and its looming presence made him feel that people were losing the ability to shape their own community.

Think about that for a moment. When I was growing up in West Seattle, I never heard that criticism about Boeing. It was a company built and run by local people. Boeing was heavily involved as a corporate citizen in countless charitable, civic and educational endeavors and organizations. Until recently, Amazon had a comparatively light touch in the community. Now the company has two choices to make going forward. The first is to continue growing in other communities, and eventually skinny down its profile in Seattle.

The second is to make a concerted effort to make Seattle a company town by becoming far more involved in helping the community. Not just generous donations to high profile organizations and foundations, but copious involvement in smaller entities, from Scout troops to P-Patches, the kind of hands on involvement that helps people lead happier lives. It will take time, and some additional money, but it will buy Amazon something that Boeing enjoyed for many years and companies like Alaska Airlines enjoys today: goodwill.

Other election-related lessons, from around the state

Unlike Seattle, a lot changed in the rest of Washington in one year. Last November in Washington, Democrats ran the table, winning seats in the state Senate they weren’t expecting to capture, and increasing their majority in the state House from two to 16. They flipped the 8th Congressional District, which had been Republican since the Reagan era, and spooked two Republican incumbents, McMorris Rogers and Jaime Herrera Beutler, who weren’t expected to have tough races.

This year ideas and issues mattered more than party labels, and three distinct lessons were learned.

1. Voters dislike government greed as much as corporate greed. With enemies like Sound Transit, Tim Eyman didn’t need any friends to get Initiative 976, the $30 license-tab measure, approved Tuesday night. Even a $5 million war chest — outspending the 976 campaign about 50 to 1 — wasn’t enough to make it a close race. Why? The greed of Sound Transit.

Three years ago, Sound Transit got the green light to raise people’s property taxes, sales taxes and car tabs to vastly expand light rail throughout King, Pierce and Snohomish counties. It soon became apparent that voters weren’t aware of just how high their car tabs were rising, and they were furious when they learned that the higher tax rates were tabulated on an inflated value of their car, rather than the actual value reflected by the Kelley Blue Book. 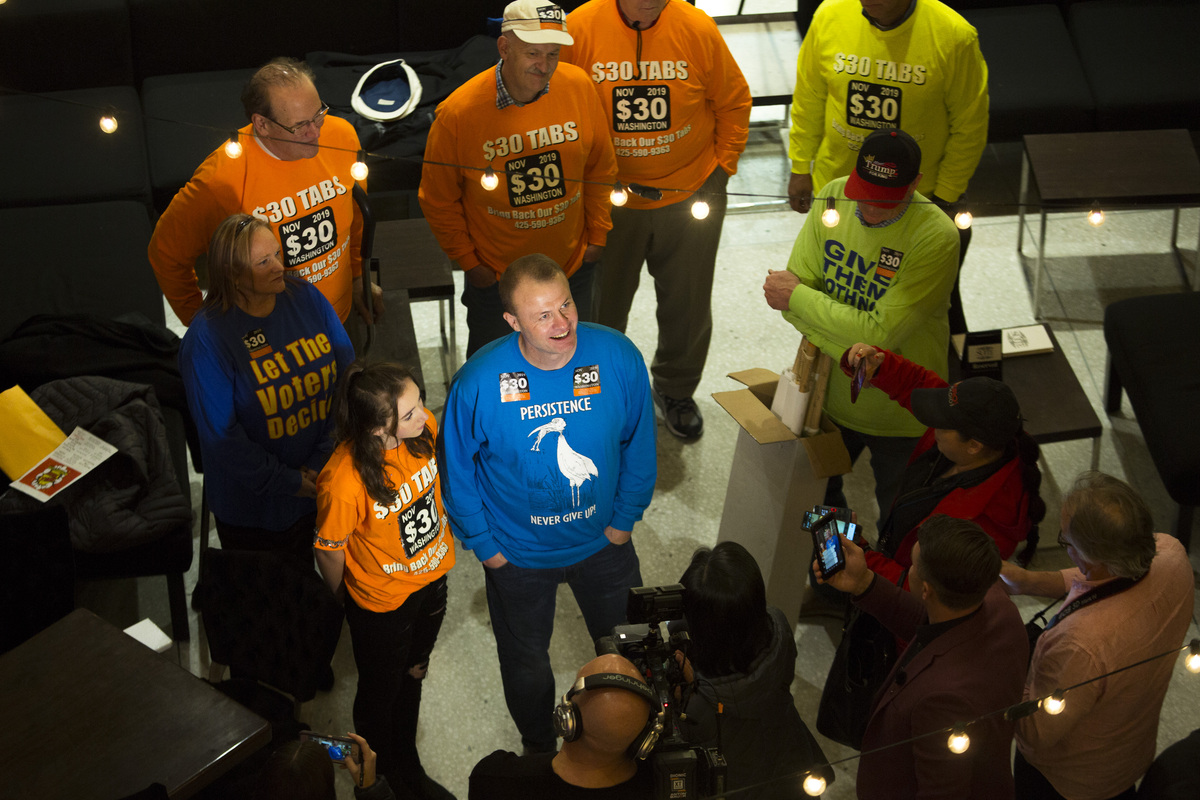 Initiative-976 sponsor Tim Eyman speaks to supporters during an election night event in Bellevue, Tuesday, Nov. 5, 2019. The initiative would reduce car-registration fees that are paying for new light rail projects in the Puget Sound region, while eliminating local fees that pay for bus service, road maintenance and other transportation needs in cities throughout the state. (Jason Redmond for Crosscut)

Initiative-976 sponsor Tim Eyman speaks to supporters during an election night event in Bellevue, Tuesday, Nov. 5, 2019. The initiative would reduce car-registration fees that are paying for new light rail projects in the Puget Sound region, while eliminating local fees that pay for bus service, road maintenance and other transportation needs in cities throughout the state. (Jason Redmond for Crosscut)

Some legislators tried to change the valuation scale, but Sound Transit fought it, persuading House Democrats to bottle up every meaningful attempt to stop an obvious rip-off. How obvious? It became Exhibit A for Eyman in making the case for $30 tabs. He wrote the initiative to make sure the Kelley Blue Book valuation was included in the initiative’s ballot title.

If Washington’s transportation leaders want to know why they lost an election they could have won, that is one big reason. But Democrats have always had a blind spot about government greed. When was the last time a prominent Democrat sounded off about corporate greed? Probably about 15 minutes ago. The greed of the fossil fuels industry, the greed of big tech, or the health care industry, especially the pharmaceutical companies. Now, quick: When was the last time you heard a Democrat complain about greed in government? Particularly state or local government?

So fed up are voters with Sound Transit that as of Monday voters in the three-county area served by Sound Transit are barely opposing Initiative 976, with Pierce County voters favoring it nearly 2 to 1 and Snohomish County voters voting for it by more nearly 59%.

2. Voters are less patient elsewhere than in Seattle. Snohomish County Sheriff Ty Trenary was challenged by one of his employees and a former supporter, Sgt. Adam Fortney. The challenger said Trenary’s emphasis on not booking criminals into jail, particularly if they suffered from opioid abuse (sound familiar?), was enabling property crime and making drug addled homelessness worse. Running as the law and order candidate, Fortney won by double digits. Trenary called off his election night party even before the first returns came in.

3. Washington voters aren’t as liberal as you may think. When it comes to party labels, Washington, with its Scandinavian heritage, has always been a comfortable home for Democrats. There has always been a spirit of “live and let live” in these parts. But tolerance doesn’t mean “liberal.” On Tuesday, voters strongly supported I-976, which was opposed by every progressive organization with a website or post office box. Voters don’t appear to think their transportation taxes have been well-spent, and they don’t trust Sound Transit (see above).

On Referendum 88, despite a 5-to-1 fundraising advantage in the campaign’s last month, and a sweetheart ballot title, the campaign is straining to get a majority, as voters are reluctant to embrace affirmative action policies that allow the government to treat applicants for a college education or a public job differently because of their race. Supporters of R-88 vow to keep fighting if they remain behind. But if they somehow prevail the newly emboldened coalition against the referendum promise they’re not going away, either. Sometimes political campaigns put disputes to bed. Sometimes they just wake them up. And both sides on this one claim to be woke.