What did Amazon buy — and what couldn't they buy — in Seattle's most expensive election ever? 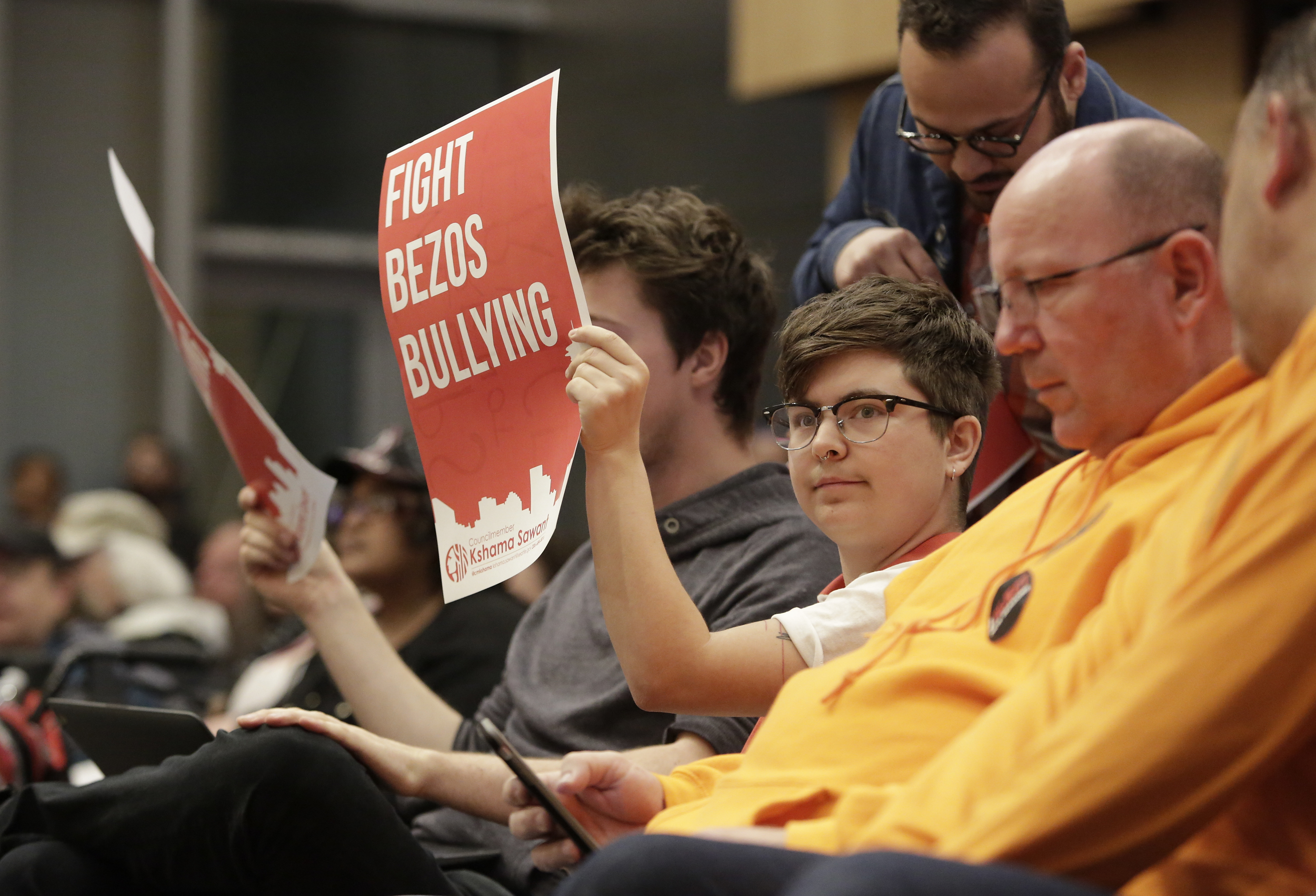 Emerson Johnson, 23, with Socialist Alternative holds a sign in favor of taxing businesses, like Amazon, during a Seattle City Council special meeting of the Finance and Neighborhoods Committee in Seattle, May 11, 2018. (Jason Redmond for Crosscut)

Seattle has often yearned to be the center of political attention. Former Mayor Greg Nickels wanted the city to be “world class.” On election night in 2015, the newly elected Ed Murray declared that Seattle would be a progressive “model for how this country can move forward.” We’ve embraced our role as an epicenter of the Donald Trump “resistance,” and Mayor Jenny Durkan has touted suing the federal government over immigration policies.

The 2013 election to the city council of Socialist Alternative candidate Kshama Sawant in a squeaker win over Richard Conlin made Seattle a beachhead for capital “S” socialism. She became the highest officeholder for a small, far left national party — and a lightning rod for Democrats and Republicans. Outside groups have supported her reelection and her party has worked fervently on her behalf. The street corners of Capitol Hill were flooded with Sawant sign wavers on the eve of the election.

The Seattle Metropolitan Chamber of Commerce and its allies made her a symbol for socialism run amok, especially for the unpopular Amazon “head tax” that the city council passed and then rejected under pressure when the company threatened to pull back its presence in the city. She drew more attention too from other left-leaning supporters at the national level, like presidential candidate Elizabeth Warren, who weighed in with a tweet saying, “Surprise: Amazon is trying to tilt the Seattle City Council elections in their favor. I’m with the Seattle council members and activists who continue standing up to Amazon.” Vermont Sen. Bernie Sanders shared a similar sentiment. Not many Seattle council races have garnered that kind of attention from presidential campaigns.

This election season, Seattle became a battleground in a kind of David and Goliath story. At least that’s how it went with the narratives of both the Amazon and Sawant forces, both of which talked less about what they would do positively for the city than about how bad the other guys were. In my mailbox, flyers appeared questioning Sawant’s ability to work with others. “She Can’t Even Work With Her Fellow Progressives,” screamed a headline on a flyer in support of her District 3 opponent, Egan Orion, from the Civic Alliance for a Sound Economy, a chamber group bolstered by donations from Amazon, Expedia and Vulcan, among others. Sawant countered with one of her own, featuring a black-and-white image of a bald Jeff Bezos looking a bit like Dr. Evil. “Don’t Let Amazon Buy This Election,” it pleaded.

How was it that a local city council district election was drawing national attention? It wasn’t supposed to be like this. The reintroduction of council districts in 2013 after more than a centurylong absence was intended to bring power back to the neighborhoods, making it possible for more grassroots candidates to emerge, to put the “local” back into local elections so that candidates would not have to run generalized, citywide campaigns fueled by expensive TV ads.

The city’s democracy voucher program was supposed to give these candidates a low-cost, publicly funded way to compete and keep election spending under control. It is decidedly not under control. Of the 14 council candidates, all dropped the voucher program as overall campaign spending skyrocketed with independent groups. It will be the most expensive Seattle City Council election ever. There wasn’t just the $1.5 million from Amazon; across the primary and general election some $5 million went to support individual candidates. The chamber put $500,000 behind Sawant challenger Orion and $450,000 into District 6 to promote Heidi Wills, a former city council member carrying the baggage of the "strippergate” scandal.

Districts have made it more difficult for downtown business interests to wield influence. To wage a citywide campaign in seven unique districts, groups have had to spend more money through political action committees to do polling and target their messages, not to mention facing the challenge of recruiting downtown-friendly candidates. Their polls, and last month’s Crosscut/Elway Poll, showed widespread dissatisfaction with the city council, something the chamber tried to capitalize on by making Sawant the poster child for all civic dysfunction. But this week’s preliminary election results suggest no huge groundswell for change. Incumbents, save Sawant, did pretty well, as did candidates with council staff experience.

In other words, while districts did not hold the promise of less expensive elections with less outside influence, the early results suggest a status quo progressive council. We’ll know more in a year, once we’ve seen them at work. Some candidates, like Orion, are already trying to distance themselves from the perception that they are Amazon lackeys. He told KUOW on election night that he “didn’t want the shadow of Amazon hanging over me.”

Districts also flexed their muscles early by expressing dissatisfaction with some incumbents, like Bruce Harrell and Mike O’Brien, who were among those choosing not to run for reelection after sensing waning support among their constituents. These were once at-large councilmembers who had tried to adapt to the new system, but districts had shifted the political ground underneath them.

While one can try to “nationalize” council races with an overarching citywide theme, it’s becoming clear that districts really do matter to the people that live in them. Voters make decisions based on local experience rather than broad memes. Amazon’s unprecedented spending underscored longtime local suspicions about downtown influence. At Lisa Herbold’s election night party, in West Seattle, she drew Crosscut reporter Hannah Weinberger’s attention to a sign in the window of the Great American Diner and Bar. “That sign was made two months ago, long before Amazon money. And it says don’t let downtown buy District 1.”

Seattlelites are concerned about homelessness and affordability, but nuts-and-bolts issues like potholes, a Seattle election staple, weren’t much discussed. Things like that are a big deal and a perennial symbol of City Hall’s failure to deal adequately with the basic needs of society, let alone more chronic and systemic issues like income inequality and its consequences. Amazon might have done better by putting its $1.5 million into getting the roads and sidewalks fixed in every district. That’s the kind of civic engagement that might be more useful than pouring money into campaigns designed to divide and demonize.