A proposed pilot program would give 500 low-income Washingtonians $500 a month. 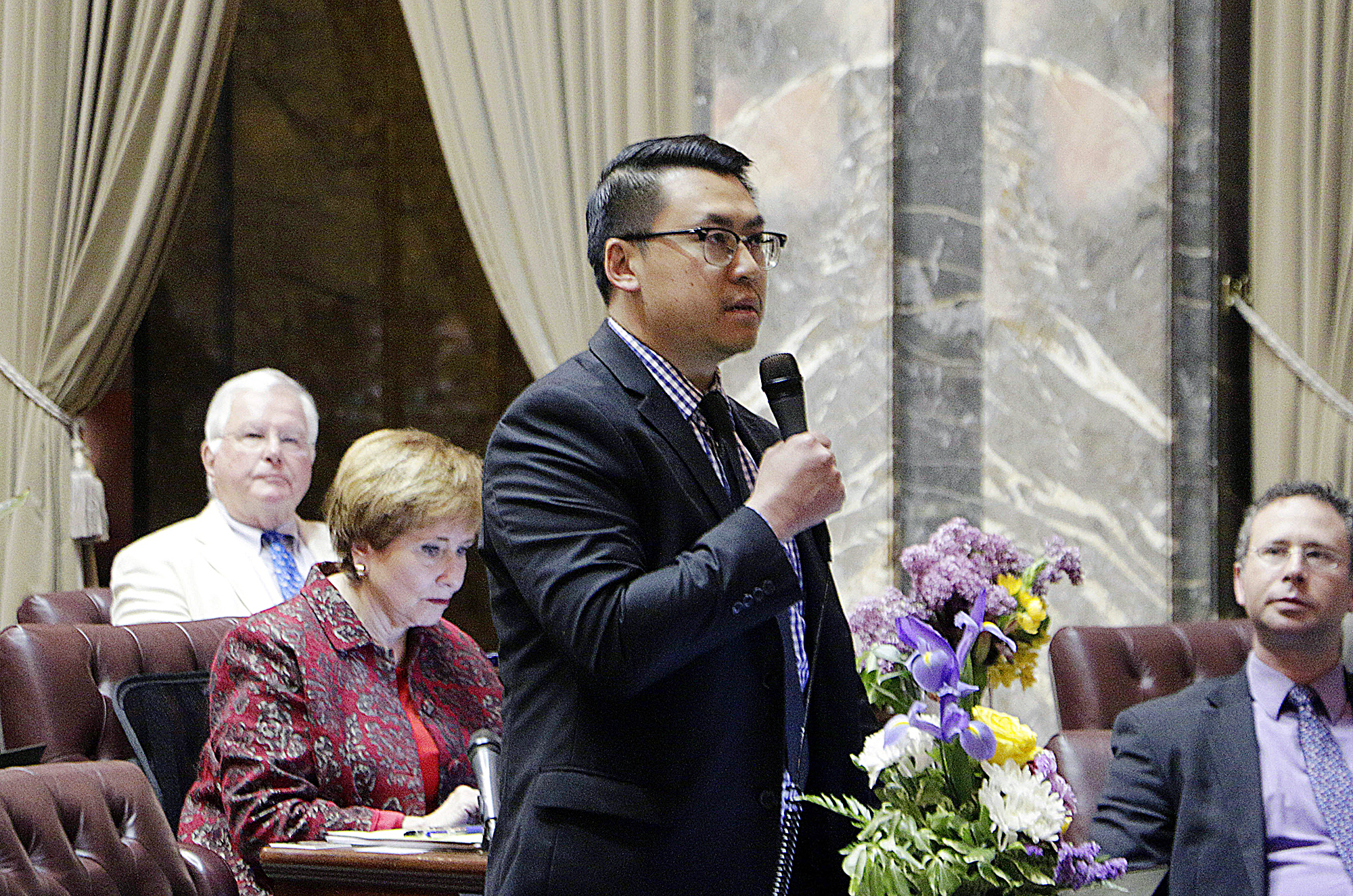 Washington state Sen. Joe Nguyen has proposed conducting a two-year test of a universal basic income program, in which 500 adults statewide would be given $500 a month.(Rachel La Corte/AP)

Presidential candidate Andrew Yang has made waves in the Democratic primary contest by proposing that every U.S. adult receive $1,000 a month.

Now, a Washington state legislator wants to try out the idea of universal basic income, but on a smaller, more local scale.

The idea: Give 500 adults in Washington state $500 a month for 18 months, then analyze the results. The trial benefit would be available to people who are also eligible for assistance through the state’s Basic Food program.

With the decline in retail jobs and other types of traditional employment, he said, “We do need to have some sort of basic income to take care of folks on the margins.”

Nguyen, one of the Washington state Senate’s more liberal members, said he generally likes the plan Yang has proposed at the national level. But he thinks the expense of Yang’s plan could be a barrier to actually making it happen. A top liberal think tank, the Center on Budget and Policy Priorities, estimated that a universal basic income plan slightly less generous than Yang’s would cost the federal government between $30 trillion and $40 trillion over 10 years.

Nguyen said his 500-person pilot program would come with a much smaller price tag: more like $7 million over the state’s two-year budget cycle.

“This is a very realistic, pragmatic approach to the proposals he is floating, so that we can actually get more insight into how this can actually play out,” Nguyen said Friday. “So this is almost like a study of what we can do nationally as well.”

Schoesler said that while the program might start as a pilot, it is just a first step toward making Washington a “welfare state.”

“When does it ever stop?” Schoesler asked Friday.

A key Democratic leader was less negative about the concept. Senate Majority Leader Andy Billig, D-Spokane, wrote in a text message Friday that while he had yet to see the legislation, “it sounds like a creative idea” and he looks forward to reviewing it.

Still, it is too early to say what will get included in the state budget this year, Billig said. The Legislature is now in the middle of a 60-day session, in which lawmakers plan to make adjustments to the two-year spending plan they approved last year.

Nguyen says the basic-income program pilot, as well as its expansion, could be paid for through a new tax on employers that pay people salaries in excess of $1 million per year. The tax would be paid by the companies themselves, not by the employees, he said.

Nguyen’s tax proposal, which he introduced last year but has yet to receive a hearing, would raise more than $300 million per year, according to a state fiscal analysis.

Yang, meanwhile, is proposing a 10% value-added tax to help pay for his universal basic income plan. Yang’s plan also would rely on reducing spending on other social-welfare programs, according to Politifact. Recipients of some programs would need to choose between their current benefits and the $1,000 per month in cash, the fact-checking website reported.

That’s an area where Nguyen’s plan differs from Yang’s. Under Nguyen’s bill, people who receive the $500 benefit would still be eligible for other income-based programs, such as food stamps and the state’s housing and essential needs program.

“The point is that this shouldn’t take away from the different services they have — it should augment those services,” Nguyen said.

The final months of the two-year pilot would be devoted to analyzing data from the test months, with a report to be delivered to legislators by Nov. 1, 2022. The data analysis would look at whether there were changes to the recipients' mental and physical health, financial well-being or employment, among other factors.

Schoesler, the Senate minority leader, criticized the way Nguyen’s plan would pay for the proposed benefit. The Republican lawmaker said he is concerned about putting new burdens on companies that create jobs, as well as Democrats opening the door to an income tax that would affect other people throughout the state.

The Yang campaign didn’t comment directly on Nguyen’s proposal in Washington state. But a spokesperson for the campaign, S.Y. Lee, wrote that, in addition to Yang’s own basic-income proposal, the presidential candidate “supports other programs that accomplish similar goals.”