Landlords worry the proposal from Councilmember Kshama Sawant will leave them housing people for months without rent payments. 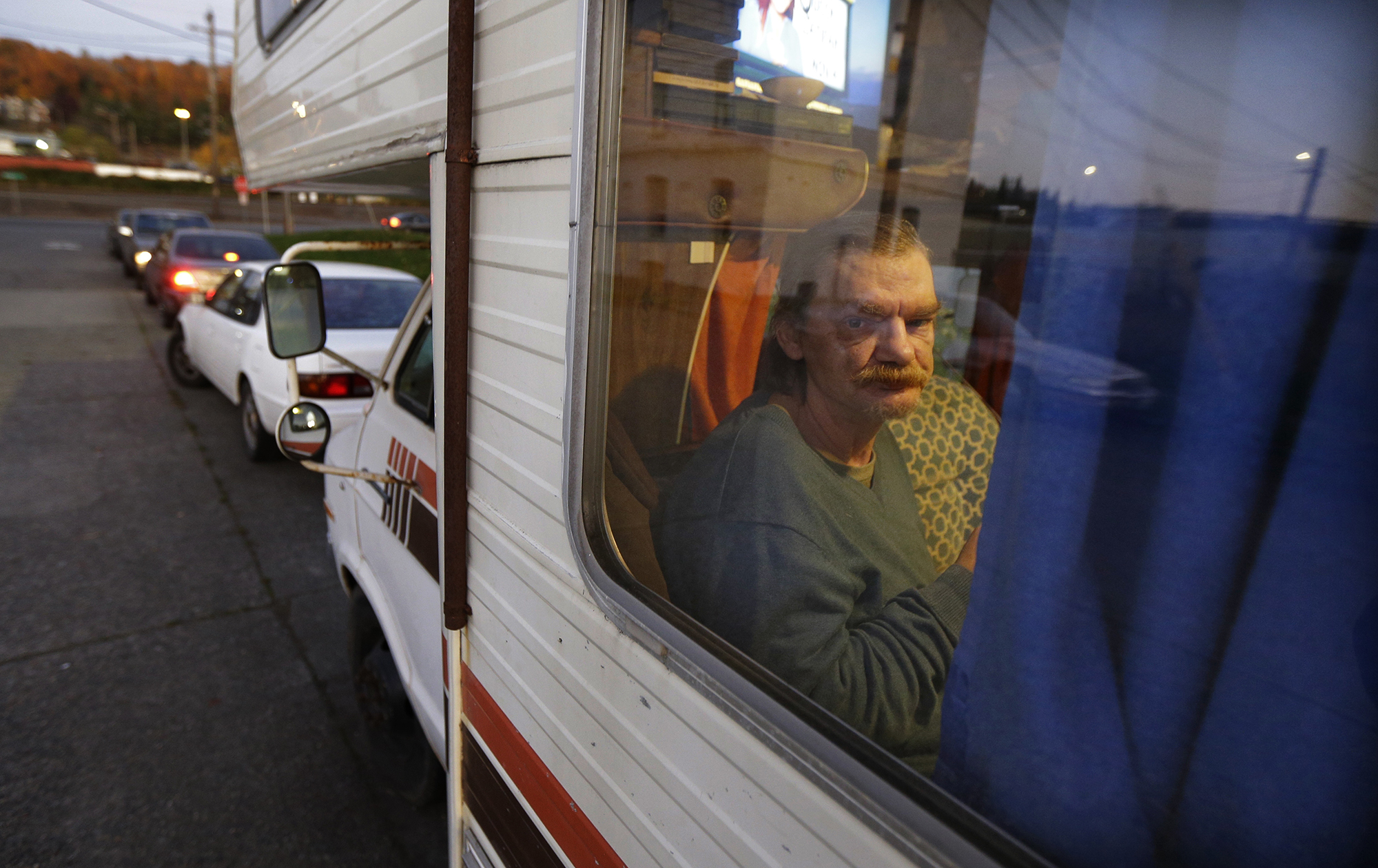 In this Oct. 30, 2017 photo, Stanley Timmings looks out of the window of the RV where he lives with his girlfriend on the streets of Seattle. Earlier in the year, the couple lost the room they were renting in a house when the owner died of cancer, and they were unable to find a room or apartment that they could afford, so they bought the RV for $300. In Seattle, about one-third of unsheltered homeless people live in vehicles, according to recent homeless counts. (Ted S. Warren/AP)

Snow flurries fell outside the window of King County evictions court last week as a gaggle of tenants and volunteer defense lawyers milled in the hallway, puzzling out options to keep these renters housed. Now, following a 7-0 vote Monday by the Seattle City Council, they have one more defense: Winter.

The measure, proposed by third-term Councilmember Kshama Sawant, allows low-income tenants to use winter as a defense against eviction from December through February — a smaller timeline than the five months Sawant originally proposed. Landlords can still initiate eviction proceedings and tenants will still owe their debts, but the whole process will pause until the calendar reaches March.

There are some exceptions, including cases involving criminal conduct or where a tenant poses a health or safety risk to the landlord or fellow renters.

But, critically, nonpayment of rent would not result in an immediate eviction.

The idea, modeled after rules in France, is largely untested elsewhere in the United States. For its proponents, slowing evictions in the winter is a sane step to avoid kicking people out of their homes and into the rain and cold.

For Sawant, a socialist, the proposal is a lifeline in a rental market “dominated by corporate landlords that care more about profit than housing people.”

“This is huge,” Sawant said of the bill.

Mayor Jenny Durkan and some landlord and development groups, however, have raised questions about the measure’s legality and effectiveness.

In a letter sent to the council Monday, a representative of the mayor’s office said they have “significant concerns that the operational, legal and policy issues associated with [the bill] will not help the City achieve those goals” of reducing eviction.

“It’s a big one,” said MariLyn Yim, who owns a triplex in Seattle and has sued the city over tenant-landlord regulations in the past. “There’s some really big gaps in what they’re proposing here.”

In response to worries from small landlords, Sawant’s colleagues passed several changes to her original proposal Monday. In addition to shortening the period from five to three months, the council approved a change from Councilmember Alex Pedersen to exempt landlords who own four or fewer units. Despite concerns that larger landlords could hide ownership under limited liability corporations, the amendment passed 4-3.

The council also approved a “mitigation” fund as a buffer for landlords with tenants who struggle to pay rent. “I want to be sure we’re not forcing small landlords into a position where they have to let that person rent” for months without receiving income, Councilmember Andrew Lewis said of his amendment last week. The proposal would cost about $500,000 a year, Lewis said Monday.

As Seattle and King County increase spending and coordination to lift people out of homelessness, the region is struggling to plug the pipeline that leads to the streets and shelters. As a result, while more people are finding housing, the total number of those experiencing homelessness has remained largely stagnant.

For many, preventing evictions is an achievable and relatively cheap way to slow that inflow. But while there’s broad support for eviction prevention, the new rules surrounding winter evictions has pushed Seattle into new and controversial territory for an American city.

The number of evictions that occur in Seattle during the winter is small relative to the number of renters. In 2017, the King County Sheriff's Office served 179 evictions in the three months that would be subject to the ordinance, according to data compiled by Washington CAN, an advocacy organization pushing for the legislation, as part of a larger report on evictions.

But while the total is small relative to the number of renters in Seattle, the effect is no less devastating on the individuals at risk of losing their home.

A man who asked to be identified by only his first initial, J, came to court Tuesday expecting to plead to a judge for flexibility. Almost a year out of prison, J had started to piece together stability. He works as a contractor and is taking apprenticeship classes to join a union. Last fall, he had built up $3,000 in savings.

But then a friend hurt himself and couldn’t work. When he asked J for money, J hesitated, but ultimately lent him the money. J hasn’t heard from his friend since.

At the same time, bad weather and unpredictable schedules kept shaving days off his work schedule. His bank account empty, his paycheck slim, J fell behind on rent and kept falling further behind. He’s down to one meal a day now.

In recent months and years, elected officials and philanthropic organizations have come to view spending money up front to keep people like J housed as an effective strategy for slowing entrances into homelessness. J owed more than $6,000 when his landlord served him with an eviction notice, but the price of his falling into homelessness would likely be higher for both J and the community.

The nonprofit Wellspring, the United Way of King County and the Seattle Mariners fund and operate Home Base, a highly accessible relief fund for tenants facing eviction. In fact, in less than two hours, a volunteer attorney recommended the program to J, he filled out an application and was approved for at least $5,000 in relief and perhaps more down the line.

Since it began in April, Home Base has prevented 816 evictions, according to United Way. Cobi Howard, who works at Wellspring and spends his mornings in the courthouse helping tenants access the relief, said he denied only five of 54 applicants in January.

But, Howard said, with more money, he could offer more relief per tenant.

In the Monday letter to council, the mayor’s office advocated expanding this kind of relief.

Edmund Witter, managing attorney of the Housing Justice Project, which provides free legal defense for tenants facing eviction, said a moratorium could give tenants flexibility to find a long-term solution. Even help from Home Base sometimes takes more time to come together than tenants have.

“The winter eviction policy, we’re still going to see the same cases, but we’re really going to be able to resolve them in an efficient manner,” Witter said.

At least one pro-development group, Seattle for Growth, is arguing the law would deprive landlords of their right to property, violating the Fifth Amendment of the U.S. Constitution. Yim, the landlord, said she would consider being a plaintiff against the city once again.

Back in the courthouse, J was surprised and relieved to find out how much help was available to him. The snow flurries had stopped, but temperatures still hovered in the upper 30s, and for J, the stakes felt higher than they would in the summer.

“If it wasn’t cold outside, I could lay down in a park,” he said. But he wouldn’t let his mind wander that far. Asked if he thinks about falling into homelessness, he said, “I do, but I push it back down. That shit ain’t easy when it just keeps piling on you.”