The dozen LGBTQ women came from an ICE facility in New Mexico, which was abruptly closed after complaints about medical care and the death of one woman. 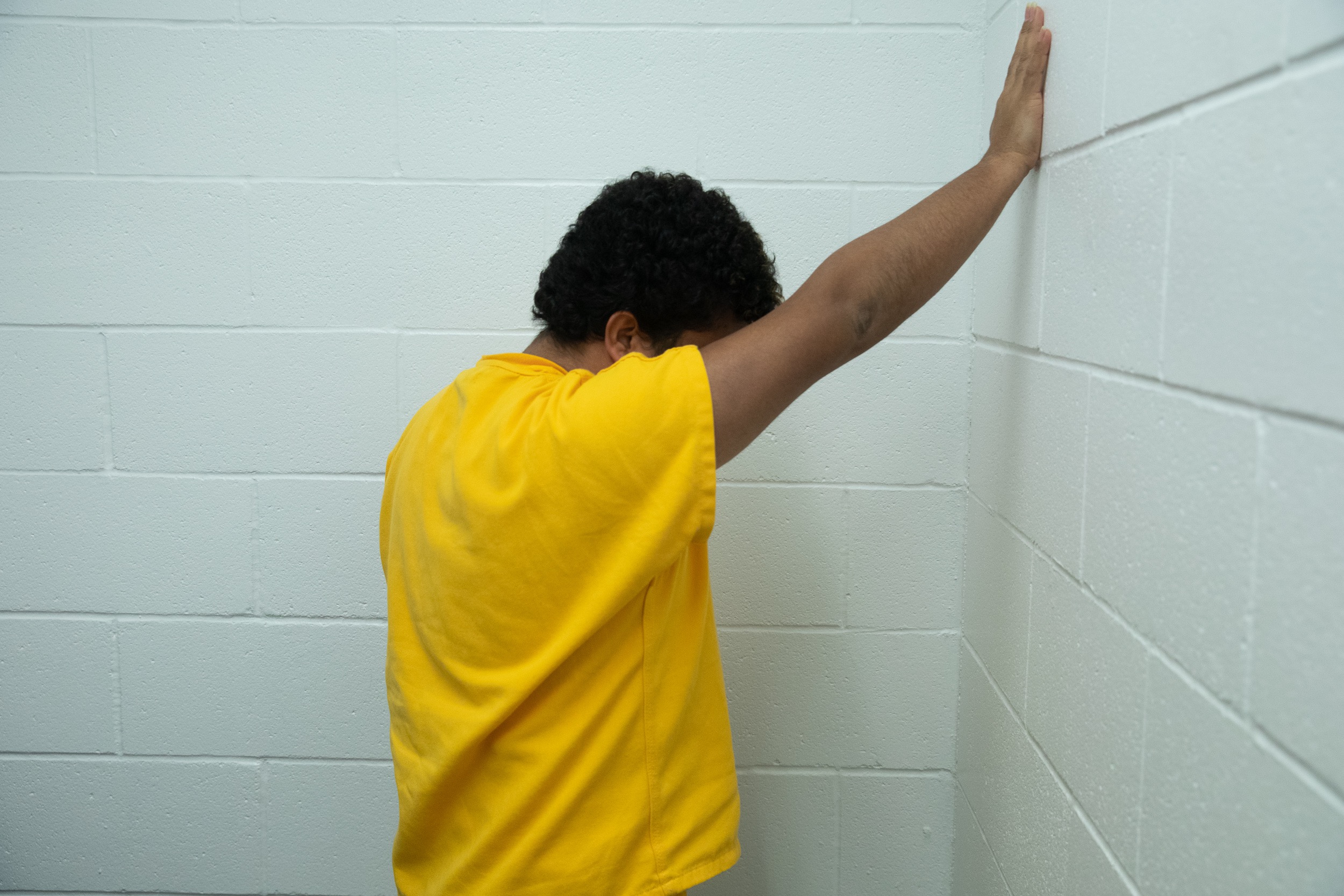 Amara, a transgender detainee from El Salvador, at the Northwest ICE Processing Center in Tacoma stands in a meeting room for an anonymous portrait, Feb. 11, 2020. (Matt M. McKnight/Crosscut)

It would be years before Amara reached the U.S.

Sitting in the ICE detention center in Tacoma — dark, curly hair with a hint of bright dye, yellow prison shirt — she gives off a sense of desperation: Had she traveled all this time and all this way just to be locked up?

Amara, who is transgender, left her home country of El Salvador in 2016, after gang members held a knife to her neck, she said, and demanded that she live as a man, not a woman.

“I can’t change the way I am when living this way is what makes me happy,” Amara said in Spanish, nervously rubbing her hands together. (Her name in this story has been changed to protect her privacy.)

For several years after escaping El Salvador, Amara lived in Mexico — until she was sexually assaulted. Slowly, the 32-year-old, who is diabetic and HIV positive, began making her way to the U.S. She had heard the country offered protections for people like her. In November, she turned herself in at the San Ysidro Port of Entry, which sits between Tijuana and San Diego, and requested asylum.

Amara is one of about 14 members of the LGBTQ community to recently arrive at the Northwest ICE Processing Center. Last month, the group of transgender women were transferred here from the Cibola County Correctional Center in Milan, New Mexico, about 80 miles west of Albuquerque. The facility is owned and operated by CoreCivic, a private prison company headquartered in Nashville, Tennessee. U.S. Immigration and Customs Enforcement asked CoreCivic to run the facility even after the federal Bureau of Prisons ceased working with the company due to an investigation that found medical neglect had led to the death of inmates. Approximately a dozen more transgender detainees were sent to Aurora, Colorado. ICE refers to the moves as temporary.

Advocates and immigration attorneys say the transfers were necessitated by medical complaints about the care of transgender individuals housed in Cibola.

In a statement, Tanya Roman, a spokesperson for ICE, acknowledged poor conditions had led to the transfers, noting that they had occurred while the federal agency “works with its contractor to assess and improve the quality of long-term health care management” at the Cibola County Correctional Center.

ICE, Roman said, “takes both the mental and physical well-being of all those within our care very seriously.”

In 2014, ICE opened a first-of-its kind dedicated unit for transgender women in Santa Ana, California. One year later, ICE established guidance on the care of transgender individuals in custody. The agency’s Transgender Care Memorandum requires personnel to allow transgender detainees to identify themselves based on their gender identity. The directive also requires detention facilities to allow transgender detainees to be housed with others of the same gender identity and provide access to hormone therapy and other trans-specific health care.

In May 2018, Roxsana Hernandez Rodriguez, a transgender woman held at the Cibola County prison, died of HIV-related complications. An independent autopsy later revealed Hernandez showed signs she had been abused before her death, raising questions about her care at the facility. A little over a year after Hernandez’s death, Johana Medina León, another asylum-seeking transgender woman, died in a hospital in El Paso, Texas, shortly after being released from ICE custody. She reportedly requested medical attention while in custody, but was denied.

In 2016, the watchdog group Human Rights Watch released a report involving interviews with 28 transgender women — most from Mexico, Guatemala, El Salvador, and Honduras — who had been kept in ICE detention between 2011 and 2015. The organization found even those living in the Santa Ana unit dedicated to transgender detainees were “regularly subjected to humiliating and abusive strip searches by male guards; have not been able to access necessary medical services, including hormone replacement therapy, or have faced harmful interruptions to or restrictions to that care; and have endured unreasonable use of solitary confinement.”

Last year, more than two dozen of the transgender women at Cibola County Correctional Center sent a handwritten letter in Spanish to Trans Queer Pueblo, a Phoenix-based group that advocates on behalf of undocumented LGBTQ immigrants. In the letter, they complained about inadequate medical care and mistreatment from staff.

The accounts of mistreatment and recent deaths have led advocates and members of Congress to call for the immediate release of all transgender detainees. Last month, dozens of advocacy organizations, including Seattle-based OneAmerica and La Resistencia, sent a letter to acting ICE Director Matthew Albence and Chad Wolf, acting Department of Homeland Security secretary, arguing it was their understanding that ICE facilities were not complying with the agency’s standards of care for transgender individuals as outlined in the 2015 memo.

Just this month, U.S. Sen. Patty Murray, D-Washington,  and other members of Congress, followed suit, asking that “ICE consider the supervised release of those individuals or [placing] them in alternative-to-detention programming.” The lawmakers reminded ICE that the agency should only detain transgender immigrants in facilities specifically equipped to accommodate them.

"It is unclear which ICE detention facilities, if any, have formally modified their contracts to provide a safe environment for transgender migrants," the letter from Murray and other members of Congress reads before demanding answers from the federal agency by the end of March.

Even those who are released face an uphill battle. Robert Foss, an attorney with Entre Hermanos, an advocacy organization that focuses on the Latinx LGTBQ community, is handling a number of the legal cases of the transgender women detained in Tacoma.

Foss said the Trump administration has made a number of changes that make navigating the asylum system in the U.S. extremely difficult. For example, the Migration Protection Protocols, otherwise known as the “Remain in Mexico” policy, requires that asylum seekers wait in Mexico for months as their case proceeds. In addition, the administration can now reject asylum applications from anyone who has not already been denied asylum in one of the countries they traveled through on their way to the U.S. Finally, the administration has reached deals with El Salvador and Guatemala to send asylum seekers back to those countries, claiming they are safe countries.

“There is no way in the world that El Salvador is a safe third country,” Foss said. “It is unconscionable that any government in the world would do that and in particular that the United States would do that.” A report by Human Rights Watch released earlier this month found that 138 Salvadorans had been killed since 2013 after being deported from the U.S.

Foss, who has visited some of the transgender women in detention in Tacoma, said he’s already seen signs of a “less than full understanding of trans issues.” One guard asked another about using a hand sanitizer immediately after being around some of the transgender women, which Foss took as a possible slight. Some of the women on their way to Tacoma also reported being called “perras” or “dogs” by personnel in Florence, Arizona.

But Wendy Mironov, a nurse practitioner and volunteer for La Resistencia who has visited many of the women held in Tacoma, said she’s surprised that the medical care at the facility has been as good as it is, with many of them reporting that they continue to receive hormone treatments and medicine for other health concerns, including diabetes.

“I’m shocked they have someone inside the detention center who is doing gender care,” she said.

Advocates, however, are still pushing to get the women released as soon as possible. The Washington Immigrant Solidarity Network has been recruiting a network of people in the region who are willing to host transgender individuals after they are released.

“We want to make sure they feel loved and supported,” said Monserrat Padilla, Western Washington coordinator of the immigrant solidarity network, “and build a better understanding of each other.”

Waving Pride flags, immigration advocates with the Yakima Immigrant Response Network and Central Washington Justice for Our Neighbors greeted the transgender women at the Yakima airport when they arrived in the state.

Amara herself said she’s desperate to get out and understands having a sponsor would help her case.

“Es fatal esto,” (“this is awful”) Amara said of being in detention.

“Sometimes I miss having someone to talk to,” she said, noting that although she lives in close quarters with other women, she’s not particularly close to any of them.