The suit, filed by the ACLU and the Northwest Immigrant Rights Project, calls for the immediate release of detainees in Tacoma. 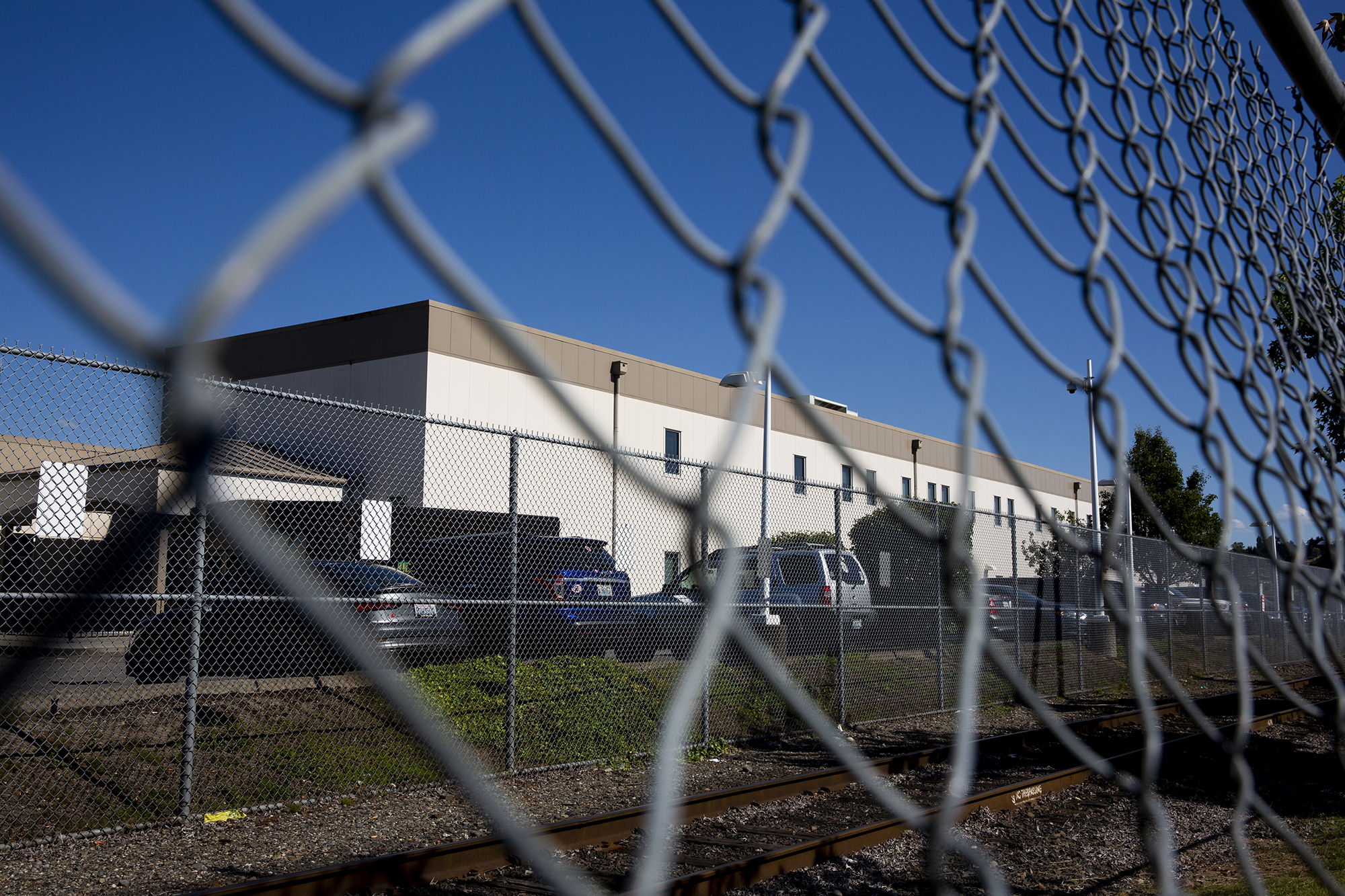 The Northwest Detention Center in Tacoma is pictured behind two layers of chain-link fence on Aug. 1, 2019. The detention center is privately run by the GEO Group on behalf of U.S. Immigration and Customs Enforcement. (Lindsey Wasson for Crosscut)

Advocates who fear for the safety of fragile immigrants being held at the ICE detention center in Tacoma filed a lawsuit Monday demanding all detainees at high risk for coronavirus be released.

The lawsuit filed by the American Civil Liberties Union and the Northwest Immigrant Rights Project maintain it is virtually impossible to engage in the necessary social distancing and hygiene required to mitigate the risk of coronavirus transmission.

The lawsuit, filed Monday in U.S. District Court for the Western District of Washington, names U.S. Immigration and Customs Enforcement (ICE) and two officials as defendants, including Nathalie Asher, director of the ICE field office in Seattle, and Matthew T. Albence, deputy director of the federal agency. The lawsuit also names Stephen Langford, the warden at the facility, called the Northwest ICE Processing Center in Tacoma. Langford is employed by GEO Group, one of the largest private prison companies in the country.

In addition, the lawsuit names about a dozen detainees at the Northwest ICE Processing Center as plaintiffs, including Karlena Dawson, a citizen of Jamaica who has been detained since 2019. She suffers from cholangitis, an autoimmune liver disease. According to the lawsuit, Dawson was previously deported but returned after learning that her children, who remained in the United States, had suffered physical and sexual abuse at the hands of their foster father.

Kelvin Melgar Alas, another detainee, originally hails from El Salvador. He has been at the Northwest ICE Processing Center since 2018. Melgar has been confined to a wheelchair since 1995, when he was shot in the spinal cord. He requires a catheter, and has been transferred to the hospital multiple times for pneumonia while detained.

Last week, in an effort to prevent coronavirus outbreaks, ICE announced detention centers across the country would no longer accept visitors. Lawyer visits are still allowed. Although ICE maintains there are currently no known cases of COVID-19 among detainees, both the immigration court and the ICE field office in Seattle have closed in the last month because of staff exposure to the virus. Two Washington state Department of Corrections employees have also tested positive for COVID-19. And an employee at an ICE detention center in New Jersey is currently in quarantine and being tested for the virus. Four detainees in ICE facilities had been tested as of March 3, the federal agency said.

Concerns over the spread of the coronavirus among those incarcerated is not unique to the U.S. Earlier this month, seven prisoners died in Italy after riots broke out over measures taken to contain coronavirus, such as restrictions on family visits. In Iran, officials temporarily released more than 54,000 prisoners in a desperate attempt to control the outbreak. Lawyers and advocates in the United Kingdom are also pushing for detainees to be released from immigration facilities.

In Washington state, at least 42 people have died from COVID-19, and across the U.S., more than 70 have died.

Marc Stern, a professor at the University of Washington School of Public Health, said many of those who are incarcerated fall into high-risk categories, which makes individuals not only more prone to getting sick but also unlikely to recover.

Staff at detention and correctional facilities are under the same social and family pressures as other community members, and the likelihood of a guard or another employee becoming ill themselves and introducing a virus to those incarcerated is high, Stern said.

In addition, with employees out sick, adequate staffing at high-security facilities can be difficult to achieve, putting public safety at risk from possible outbreaks, Stern said.

It’s in the best interest of everyone to look for ways to reduce incarcerated populations, Stern argued.

Reducing the number of detainees who catch the virus also frees up already strained medical resources.

Even under better circumstances, ICE detention facilities are known for medical lapses. Since October, at least eight people have died in ICE custody. In a memo revealed last year, a supervisor in ICE’s Health Services Corps told the agency’s Albence that the unit tasked with providing health care to detained immigrants is “severely dysfunctional and unfortunately preventable harm and death to detainees" have occurred.

Enoka Herat of the ACLU of Washington and Matt Adams, legal director at the Northwest Immigrant Right Projects, argue the Fifth Amendment and the Eighth Amendment’s prohibition against cruel and unusual punishment protects those in civil detention in circumstances like these.

“Exposing people who are at high risk is cruel and unnecessary and violates their constitutional rights,” Herat said.

This isn’t the first time legal and advocacy groups in the region have argued for the release of detainees. Last week, the ACLU of Washington, Northwest Immigrant Rights Project and Columbia Legal Services sent a letter to ICE's Asher and GEO Group demanding that sick individuals be released and asking for a plan for where people at Tacoma detention center will be housed if they are exposed to the virus.

“We would expect NWDC to be proactive about this,” said Herat of ACLU of Washington. “This is what needs to happen in order to save lives and put less strain on all our medical systems.

“The question I have for ICE is what are you waiting for.”