The coronavirus hasn’t stopped the first-ever census of the invasive yellow bush, which can displace forests and increase wildfire risks. 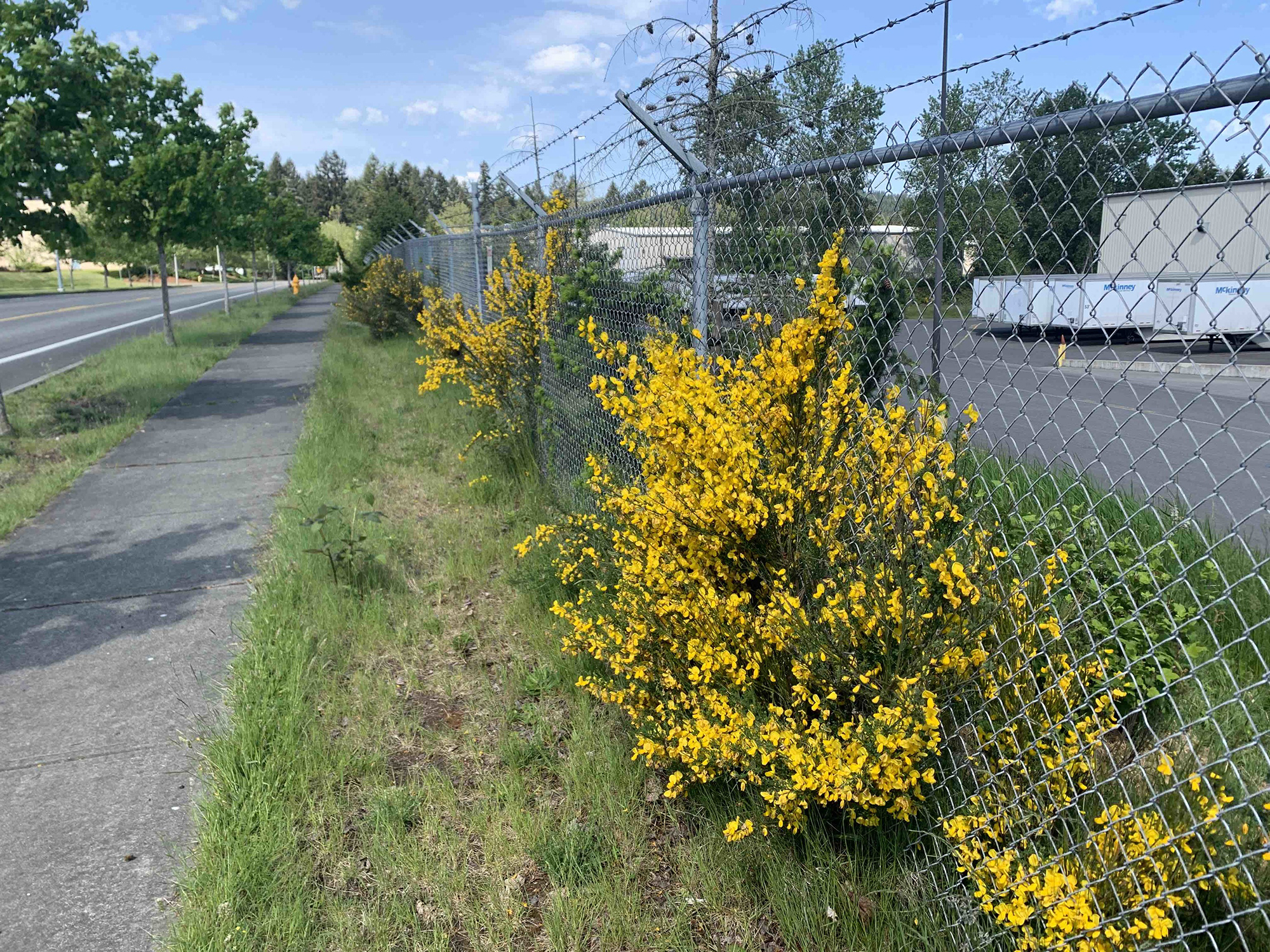 Scotch broom reported in Tumwater by a member of the public. The plant, like all invasive species, doesn't respect property boundaries or jurisdictions. This issue often crosses fence lines and ownership boundaries and requires a whole community approach to successfully address the problem. (Washington Invasive Species Council)

When Dave Leach started noticing bright yellow bushes flowering alongside Washington highways, he wondered if it was gorse, a similarly striking plant he saw brightening the Edinburgh hillsides during his honeymoon in Scotland. A friend introduced him to the nature identification app iNaturalist, and the mystery plant was soon revealed to be Scotch broom.

“My camera has turned into this magical ‘what’s that plant’ machine,” Leach says. “When all you have for travel is walking around your neighborhood, it’s a great way to pay more attention to what's around us right now.”

When Leach, a computer programmer who lives in Queen Anne, logged that sighting of Scotch broom on iNaturalist, he was also participating in a bigger effort: This year, for the first time, the Washington Invasive Species Council is conducting a citizen-led Scotch broom census to get a better sense of the scope of the invasive plant’s spread. Oregon is on board, too, and anyone living in either state can help by recording sightings during May on iNaturalist or the Washington Invasive Species Council’s website.

“Now that I know about this project, it’s definitely going to leap out at me when I see it. Just by uploading that picture to iNaturalist, I’ve already contributed,” Leach says.

Scotch broom usually grows between 3 and 10 feet high, and is distinguishable each May by its bright yellow flowers. It can cause allergy flare-ups, take over pastures and increase wildfire risk because it’s highly flammable. It also displaces native forests and replaces more nutritious plants animals rely on.

The plant was brought to the United States in the late 1800s for ornamental use in gardens, and for years it was considered a good option for controlling erosion along roads. It hasn’t been planted roadside in decades and is now illegal to sell in Washington. But because its seeds can be viable for up to 80 years and can sprout by simply disturbing the soil that contains them, the problems it causes span generations.

The idea for this year’s census was sown what now seems 80 years ago — in late February, at an invasive species workshop in the Columbia River Gorge. This was two days before King County announced its first death from COVID-19. At the time, workshop participants smiled and posed with a 6-foot cutout of a bug-man holding a sign that read, “I got eradicated at the 2020 Invasive Species and Exotic Pest Workshop!”

According to Justin Bush, executive coordinator of the Washington Invasive Species Council, the idea to hold a Scotch broom census began with discussions at the workshop. Bush says property owners and land managers have looked to the state to develop programs for managing invasive species in the past. But until now, the state hasn’t been able to gather enough precise information about the location of Scotch broom to create programs to address it. That’s where the census comes in.

“In King County, for example, there’s reported to be over 1,000 acres of Scotch broom,” Bush says. “But is it 1,001 [acres] or is it a million? What we’re asking for is more site-specific information.”

On a mid-May drive on Interstate 5 from Seattle to Olympia, it might look like the war is lost: A sea of Scotch broom sways golden for miles along the shoulder. The Washington State Department of Transportation is participating in the census, too, making note of where the plant appears by the roadside. But in Eastern Washington, Scotch broom is still relatively uncommon, with no recorded infestations in nine counties. Bush says reports of it in parks or natural areas on the west side of the state can be especially helpful, because that information can be passed along to park manager, who might be able to eradicate it.

Like most Western Washington counties, King County does not require property owners to trim or control Scotch broom, and doesn’t charge fines when it appears. But what the county can do is lend expertise and weed wrenches — big, bright orange levers that clamp tough-to-pull plants by the stem and make them easy to rip from the ground. Sasha Shaw, communications lead with the King County Noxious Weed Control Program, says the county recently performed a contactless delivery of one of these wrenches.

Employees with the county’s Noxious Weed Control Program are considered essential workers, so if  people need to borrow a wrench to deal with weeds on their property, “we’ll figure out a way,” Shaw says. “The weed wrench fairies will drop it off.”

Large Scotch broom plants can be challenging to remove without a wrench or blade, but smaller ones can often be taken out by hand.

“It doesn’t have thorns, so it’s not really a high risk to the person — you can just pull it out,” Shaw says. “And because the seeds last so long, you can be like, ‘I just saved 50 years of invasion.’ ”

The census has provided Shoreline resident Jennifer Youngman and her dog, Hula, new purpose for their thrice-daily walks. Youngman has recorded 27 sightings of Scotch broom in her neighborhood so far this month.

“There’s something about having a focus, looking for Scotch broom on walks that we would be taking anyway,” says Youngman. “It gives me a deeper sense of engagement with my immediate surroundings, and I feel a little more awake and present when I'm walking than when I'm just listening to podcasts. Especially now, I love feeling connected to something bigger than myself.”

Though Youngman never actively trained Hula to sniff out Scotch broom, the dog has become accustomed to their pauses alongside the plant. So much so that last week Hula sat down on the sidewalk and waited until Youngman noticed a patch that she had previously missed.

So far, more than 700 observations across Oregon and Washington have been uploaded to the Scotch broom census project on iNaturalist, and the Washington Invasive Species Council has received more than 500 reports through its online system. This is five to 10 times as much interaction with the public as the council usually sees.

That may seem like a lot. But as the month of May winds down, the Washington Invasive Species Council is hoping to motivate the citizen scientists, plant admirers and quarantine-fatigued dog walkers of Washington with a bit of eco-friendly competition: Keep reporting Scotch broom, because right now Oregon is winning.