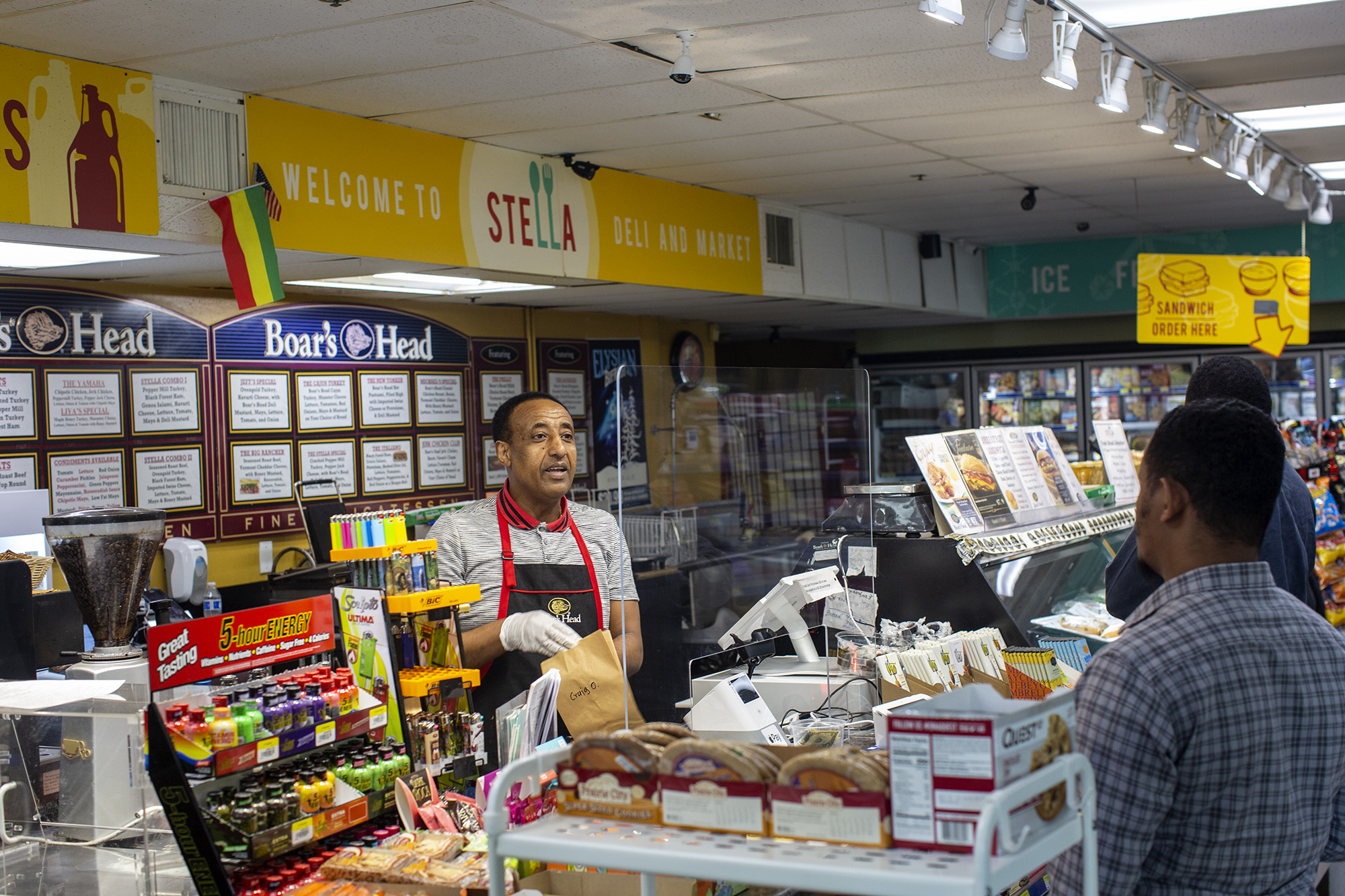 Stella Deli and Market owner Amha Ayele helps a customer with a large order of sandwiches during a brief lunch rush at his Queen Anne sandwich shop, May 13, 2020. The market has seen a decline in business during COVID-19 due to neighboring office buildings being closed and people working from home. (Shaminder Dulai/Crosscut)

These days, immigration attorney Kaleab Kassaye fields dozens of calls each week from people asking for his help. Their questions span unemployment benefits to business loans — none of which fall under his areas of expertise.

Before the pandemic, Kassaye worked primarily on immigration issues, with some personal injury cases on the side. But as an Ethiopian immigrant who speaks both Amharic and English, he’s become something of a community help line, gathering information and offering guidance that for nonnative English speakers is difficult to access.

“When you have a good grasp of the English language, you take that for granted,” he said. “But for many people, this is something beyond their comprehension. Signing up for [assistance] online and answering hundreds of questions … that’s a hard task.”

Kassaye’s new role started with his friends. Many East Africans he knew personally drove for rideshare companies Uber or Lyft, a source of income that quickly dried up because of the coronavirus. Many were overwhelmed by the pages of documents they had to read and the application forms they had to fill out for financial aid, especially because much of it was not translated from English into their native languages.

“I saw my friends, my close friends, struggling to pay rent,” he said. “It was nerve wracking.”

Even before the coronavirus pandemic, navigating government applications and paperwork was complex for many people, but for those whose first language isn’t English, those forms can be impossible to get through alone. The coronavirus has taken the problem to a new level. Now, people must quickly decide which benefits they’re eligible for, accurately apply for them and then hope they’ve submitted an application before the money backing those services runs out, as frequently happens.

Local organizations and some chambers of commerce that help non-English speaking communities in other ways have rushed to help them seek financial help during the pandemic. The city of Seattle has partnered with these organizations as they expand their efforts to assist communities, including opening up a phone line where people can get help when applying for federal assistance in non-English languages.

“You could access language [help] on the [Small Business Association] customer service line, but who wants to wait 12 hours on hold for that?” said AJ Cari with Seattle’s Office of Economic Development.

The system isn’t perfect — non-English speaking callers must still wait to get paired with someone who can help them in their language — but Cari said the city is continuing to ramp up assistance to shorten wait times, and it’s one way people can find help through the entire complex application process.

“The focus of the in-language support is really case management [since] a lot of interactions with businesses isn’t that you share one link and they’re on their way,” Cari said. “They need support throughout.”

The work to assist applicants is time consuming and not as simple as translating from one language to another, explains Jamie Lee, community initiatives director with the Seattle Chinatown-International District Preservation and Development Authority. Even if a document is translated, there’s more work to be done.

“Our work is to simplify, not only translate,” she said. And explaining a process can make it that much longer, delaying a business owner or individual from applying for aid.

Selam Misgano, who typically works as an engagement specialist with the University of Washington, similarly experienced an inundation of questions from friends and family when the stay-at-home order was first issued. Since mid-March, she has hosted a weekly conference call in Amharic to answer questions about the pandemic that are frequently related to access to financial aid.

Soon after, she started including experts and officials on the calls who could speak in more detail about resources, translating their words in Amharic to the now-40 or so participants each week. Like Kassaye, she was working outside her own expertise.

“I feel fluent in English but the information that’s being provided in English is so convoluted [that] it’s hard for me to understand and translate back to people,” she said.

Without adequate help, Kassaye says people have often felt that “at the end of the day, they’re on their own.”

Finding help in your own language

After the stay-at-home order was announced, Amha Ayele was stuck in the same situation as many other small business owners. Stella Deli and Market, his sandwich shop in Queen Anne, had been kept afloat by customers from surrounding office buildings. Now, those offices are closed and people are working from home.

The places where he normally sought community and advice in tough situations — like his church and a Seattle Ethiopian community center — could no longer host gatherings. The streets around his deli were empty. He called Kassaye, someone Ayele had met only by chance, to see if he knew what to do.

Together, they applied for a handful of business loans and last week received notice that Ayele had been approved for a little over $10,000 through a Paycheck Protection Program loan. He hasn’t seen the money yet and hasn’t heard back from any of his other applications. Even so, Ayele knows he wouldn’t have reached this far on his own. He speaks English but his first language is Amharic, and he says the pages of complex instructions dictating how to qualify for loans and dealing with the applications themselves were beyond his abilities.

“We’re business people,” he said. “We’re not specialists with that [and] it’s really hard for us to manage that, so we had to look for someone to help us apply.”

Federal loans and grants like the Paycheck Protection Program are among the most viable for many small businesses, drawing hundreds of thousands of applications since pandemic shutdowns began. But some languages like Amharic often aren’t catered to on a national level. As a result, Kassaye helped Ayele through the forms in English. It’s the same issue Kassaye has had when applying for aid with a myriad of other business owners and individuals; beyond the local level, he doesn’t often see resources translated into Amharic.

Njuguna Gishuru of the African Chamber of Commerce said this adds a layer of complexity for people and businesses seeking financial aid during the pandemic. Working with African communities, he’s seen resources translated into Amharic, Tigrinya and Somali when African language resources are provided, due to larger populations that speak those languages in Washington. Many other African languages are left out and, at times, even the three most commonly translated African languages are not offered.

Gishuru noted that some chambers of commerce provide resources in European and Asian languages, but not in African languages. The African Chamber of Commerce has worked to fill this gap and connect business owners with resources, but the process can take days.

“It takes a lot of work and not a lot of money has been seen by the small business owners themselves,” Gishuru said. By the time they get financial help, after struggling to pay rent and other immediate expenses, “They could already be out of business.”

This weak spot puts business owners in a vulnerable position. In April, Lee of the Chinatown-International District preservation and development group and other community organizers assisting business owners reported a scam to the city of Seattle in which an owner was approached via email by someone who claimed they could help the owner file for federal aid. The scammer pushed for upfront payment online, as well personal information, eventually persuading the business owner to send both.

Friends of Little Saigon, a Vietnamese American community organization, heard about the incident while doing outreach related to federal loans. After identifying it as a scam, the group helped the business owner file a report. But the damage was done. The owner had already paid the scammer nearly $400 and passed along bank information. Seattle’s Office of Economic Development reports it has received “numerous reports” of similar cases.

“They know these folks are desperate to get information more quickly, especially in this crisis, as our ability to speak face to face is limited,” Lee said.

Leaning on community, for better or worse

The road ahead for small businesses is long. For Ayele, the loan he’ll receive will likely cover his deli’s expenses only for a month. He, like many other business owners, will need financial aid for as long as the impacts of the pandemic continue.

Misgano said she understands the federal government is overwhelmed with applications, but she’s disheartened when she doesn’t see more communities included when aid is rolled out. And while she’s seen assistance offered in Amharic in King County, she hardly ever sees it on a federal level.

“Given that’s where a lot of money is coming from in terms of resources for people right now, it’s been really disappointing,” she said.

It’s an issue that wasn’t created in a vacuum. Thinking back to the scam one business owner experienced, Lee said it makes sense that someone would accept “aid” like that when seeking help is a time-consuming and at times impossible task.

“One of the things we could do to try and prevent things like this is get an advocate a seat at the table, and help us not be a week late,” she said.

Valerie Tran of Friends of Little Saigon has also worked on connecting business owners, many whose first language isn’t English, with financial aid. She’s been asked to provide translations or disseminate information about grants to businesses with little notice. If they had more time, she said they would have been more successful at giving a heads-up to business owners in need.

For better or worse, Misgano said immigrants have learned to turn to their own communities in times of crisis. The pandemic has, in many ways, been a continuation of that story. Like Kassaye, she said helping her community came naturally to her. But with work and a family to care for, it’s been difficult.

“We’re only as healthy as the people around us, so there’s a need to step up and help,” she said. “But I pretty much figured this out on my own.”