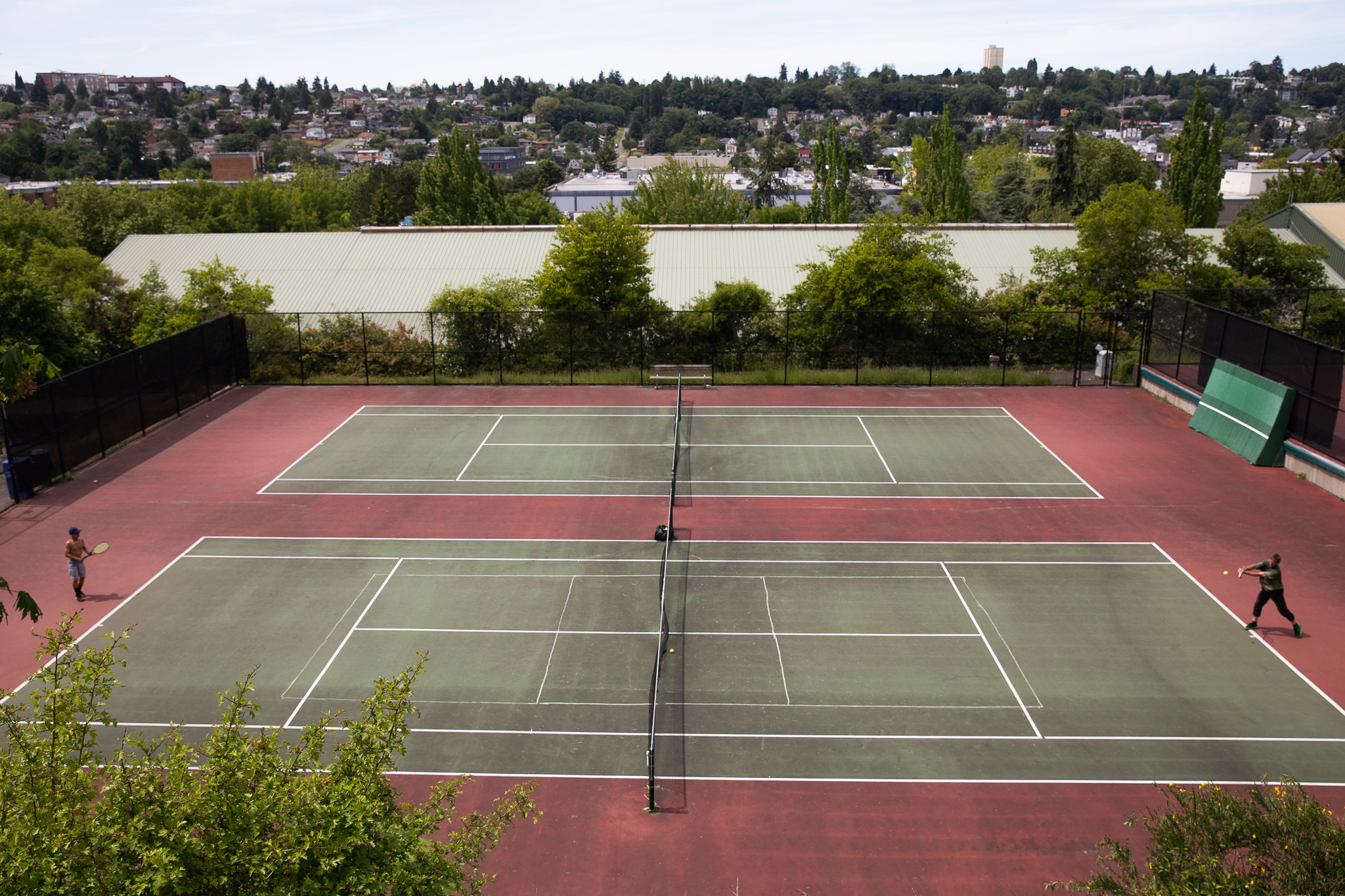 Two people play a round of tennis on the outdoor courts at Amy Yee Tennis Center in Seattle’s Mount Baker neighborhood, May 28, 2020. (Matt M. McKnight/Crosscut)

It didn’t make the evening news, but a turning point in the coronavirus shutdown happened early on the evening of Friday, May 15. Four families, all strangers to each other, were playing tennis at a North Seattle park on four separate courts. Soon an official from Seattle Parks and Recreation pedaled up on a bicycle and politely informed them that the tennis courts were closed. The families appeared confused. How come? one of the moms politely asked.

Her confusion was understandable. There aren’t many competitive sports that naturally incorporate social distancing more than tennis. You’re usually more than 15 feet away from your opponent, separated by a net, and always on the move. And plenty of people in the park were walking, jogging and riding bikes nearby. Well, said the official, we’re not letting people play team basketball or football, so in the name of “equity” it was decided not to let people play tennis, either. This time several people spoke up, pointing out that football and basketball require close contact, which tennis does not.

The parks official reiterated that the city had closed the courts and if the players were unhappy, they should contact their city council member. At that point, one of the dads scoffed, saying that he had tried and failed to get a response from his council member about problems far more pressing than a game of tennis. And then and there, all four families decided to stay put. There were no angry insults or snarky comments directed at the employee, just a firm on-the-spot decision that they were going to keep playing. The parks employee, chastened perhaps by how reasonable the players were and how foolish her orders were in the first place, quietly pedaled away. End of conflict.

I doubt that kind of defiance would have occurred two weeks earlier, and I know it wouldn’t have happened a month earlier. Quiet rebellion against the severity of the coronavirus lockdown has gone mainstream. Reasonable people of all political persuasions have noticed that rules restricting their everyday freedom, supposedly driven by “science,” seem in some cases arbitrary, inconsistent, excessive, sometimes political and occasionally insipid.

Take the new regulations on golf. Oregon and Idaho, which together have about a fifth of Washington’s COVID-19 deaths, never banned golf. The Inslee administration, for reasons never really made clear, felt it had to, including driving ranges. Finally it opened up golf on May 5, with a few caveats: Foursomes could play, but only if everyone was related. If not, only twosomes could play. On May 16, the governor said he was now satisfied that foursomes could play even if they weren’t related — but not on any golf course within Seattle city limits.

Or take the initial ban on fishing. Throughout March and much of April it was illegal for someone to go fishing on a lake or river anywhere in the state. While anglers were sidelined here, fishing went on in Idaho and Oregon. Is the science somehow different on the other side of the Columbia River?

What I find remarkable is that there hasn’t been more public rebellion outside King, Pierce and Snohomish counties. There are 39 counties in Washington state. In two-thirds of them, there have been three or fewer COVID-19 deaths. Not in the last week, but in 3½ months. Only in the past couple of weeks have some of them been allowed to move from Phase 1 shutdown to Phase 2. There are even counties (Clallam and, until just Wednesday, Kittitas) with zero deaths that are still assigned the same Phase 1 status as King County, which has, as of this writing, 552 confirmed deaths.

In mid-May, a group of five health care professionals penned an op-ed in the Wenatchee World. They argued, “It is neither prudent nor responsible to suggest that healthy individuals under the age of 60 remain at home indefinitely. People have done exactly what they were told. They stayed home, closed their businesses, and flattened the curve. Most of the rationale and data supporting the shutdown has collapsed, but some health officials and government leaders won’t let it go. Unless we want to annihilate all faith in public health authorities, we shouldn’t move the goalpost from ‘flatten the curve’ to ‘no new cases.’ ”

The University of Washington’s COVID-19 model shows that COVID activity peaked almost two months ago, on April 7. We were among the first states to lock down, and ours was arguably among the most severe in the country. But many states — red, blue or purple — that got hit with the virus after Washington began opening up two, three, even four weeks ago. In some of them, coronavirus cases are up, but that’s hardly a surprise because testing is up. In terms of fatalities, which is what matters most, the number of deaths is dropping almost everywhere, including Georgia and Florida, which were among the first states to reopen, and next-door Idaho.

Yet the decision makers in Olympia were still wringing their hands about whether they should let people worship indoors – until finally relenting earlier this week, provided the church follows social distance protocols. Churches don’t have to open, of course, and some won’t, including Catholic churches. Ironically, the Catholic bishops in Minnesota were among the leaders in pushing that state’s governor to open up sanctuaries for worship, even threatening to hold Mass in defiance of his shutdown. Gov. Tim Walz agreed to partially reopen churches this week, and also allows for socially distant weddings and funerals.

Opponents of the continued lockdown are portrayed as unreasonable, selfish or angry. In fact, most are people who stayed hunkered down for over two months, and believe the lockdown is no longer commensurate with the risks. They are simply, quietly, saying “no,” and doing what they think is prudent, cautious and in the best interest of themselves and the people they care about. The problem is not that people don’t trust the government. It’s that government doesn’t seem to trust the people.