Mayor Jenny Durkan wanted to wind down federal monitoring of the Seattle Police Department. Then the protests began. 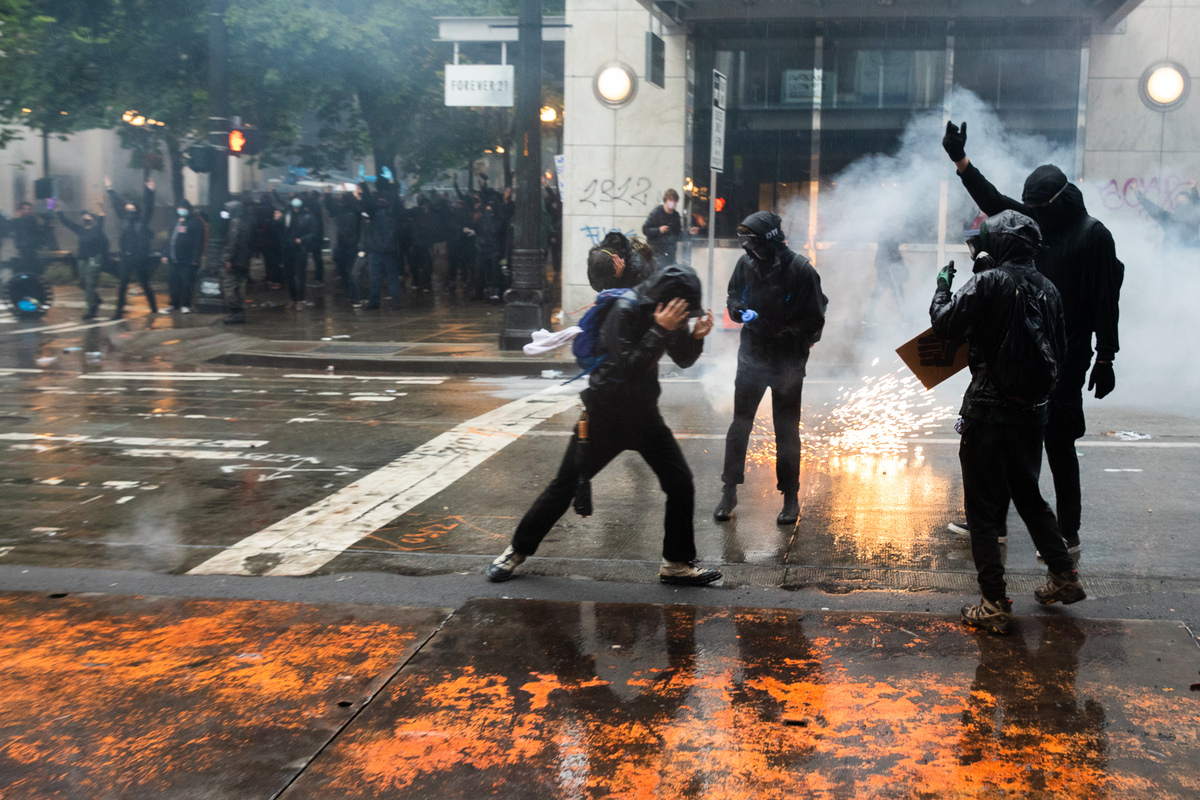 Demonstrators react to a blast ball deployed by Seattle police officers during a protest across downtown, May 30, 2020. A wave of protests has swept across the U.S. following the death of George Floyd while in police custody. Minneapolis police officer Derek Chauvin has been charged with murder in the case. (Matt M. McKnight/Crosscut)

In a stunning turnaround, Seattle City Attorney Pete Holmes announced Wednesday that he will withdraw the city’s motion to stop most federal oversight of the Seattle Police Department.

The decision comes in the midst of massive daily protests calling for more stringent police accountability, scrutiny over the department’s response to the protests and pressure from elected officials and community members to reconsider the city’s quest to wind down federal monitoring of its police.

“We’ve witnessed historic events this past week,” Holmes said in a statement. ”We saw protests erupt in cities across our nation in reaction to an heinous act by a Minneapolis police officer, rooted in a larger history of racially disproportionate policing. George Floyd’s murder was gruesome and the Minneapolis officers’ apparent nonchalance chilled me to the bone. I am struggling with feelings of sadness, grief and anxiety, and know I am not alone.”

Holmes said he would withdraw the request to mostly end federal oversight of Seattle Police — which had been winding down after nearly 10 years of work — to allow time to review and assess the department’s response to recent demonstrations.

The agreement has been in place since 2012 after a federal investigation into the Seattle Police Department — led by then-U.S. Attorney and now-Mayor Jenny Durkan — found unconstitutional levels of force and patterns of bias in police actions.

In 2018, the federal judge overseeing the agreement said the city had met its obligations and could begin winding down the oversight over two years.

But a new contract with the city’s largest police union and, now, the widespread protests complicated that cool-down period. Durkan painted the recent filing from the city as largely pro forma and, as recently as Wednesday morning, stood by the request. But it had nonetheless seeded the image among activists that the department was shirking accountability.

“Maintaining federal oversight is absolutely a victory of our movement,” Councilmember Kshama Sawant said on Twitter.

In a statement, Durkan the city "knows it still needed to address concerns on discipline and accountability, and even as we have met the required filings of the sustainment plan, I believe that we should pause as our community is rightfully calling for more police reforms."

The uprising of protesters on Seattle's streets has begun to reverberate through City Hall, beyond just Holmes’ decision. Nearly a week of protests — mostly peaceful, but sometimes confrontational in the evening — have left the mayor and members of the city council little choice but to address the messages of protesters, even at a time when COVID-19 had previously dominated city business.

Already, some of the conversations are broaching subjects rarely heard inside the halls of power — including early calls by elected officials to reduce the budget of the Seattle Police Department and a forthcoming proposal from Councilmember Kshama Sawant to ban the use of tear gas, pepper spray, rubber bullets and other equipment used by police. A majority of the council, meanwhile, excoriated the police department — and Seattle Police Chief Carmen Best to her face — for its handling of the protests.

“I hope that other council members will join me in calling for a drastic reduction in the department’s budget,” Councilmember Tammy Morales said in a video message, calling for reinvestment into “things that actually improve the lives of neighbors in our community.”

The conversation around police reform had gone quieter in City Hall recently, as homelessness, taxation and then COVID-19 pandemic overshadowed the oft-complicated systems city officials were trying to build to create accountability.

But George Floyd’s death has reignited that scrutiny. Where the city of Seattle’s request to end most federal oversight may have once slipped by, it became a rallying point for some members of the city council and community groups.

Durkan, who was elected easily in 2017 and has polled well, had come to office intending to finish what she began as U.S. attorney.

Since being elected she has praised the Seattle Police Department’s progress under that federal agreement. The city called the department a “transformed organization.” Speaking Wednesday, she said it should now be the community’s responsibility to hold police accountable.

But what was once her most comfortable territory has now forced her into a defensive posture. In the wake of heavy-handed crowd control tactics by Seattle police, protesters have looked to her and Best for answers. She has tried by addressing protesters Tuesday and promising to meet with several Wednesday, but nevertheless finds herself under pressure.

“I hold this position because people put upon me the obligation and responsibility to raise up the voices of community,” Durkan said in a tense meeting Wednesday with the city’s Community Police Commission, created as part of the federal oversight agreement. “I know and believe in the [commission’s] work, too. I know and understand that many on the CPC distrust me personally, distrust the system, distrust the police.”

“I, like every other person, have to not just speak words but have to act in ways that will gain that trust,” she said.

In the wake of Floyd's killing by a Minneapolis police officer, emotions have been raw in Seattle and across the country, especially among the city and region’s Black residents.

“This has been inevitable because we have tried every other avenue in order to be heard, in order to live,” Monisha Harrell, who's Black, a political consultant in Seattle and member of the commission, said of the protests Wednesday. “And when you have nothing to lose and your families to protect, at some point you fight back.”

Community trust in the police department has improved in recent years, up from 60% overall approval in 2012 to 74% last year, according to a report from the monitor of the Seattle police, appointed as part of the federal oversight agreement.

But that trust is squishy among communities of color, particularly the Black community. Fifty-four percent said they disagree that people of all races were treated equally by the department.

That weakness has been cleaved open in recent days.

“I am exhausted,” said Bessie Marie Scott, executive director of the Seattle Community Police Commission and who is Black. “I am tired and no one can understand. It feels like we're on an island by ourselves.”