The Law Enforcement Assisted Diversion program could be a key piece in creating alternatives to the police. 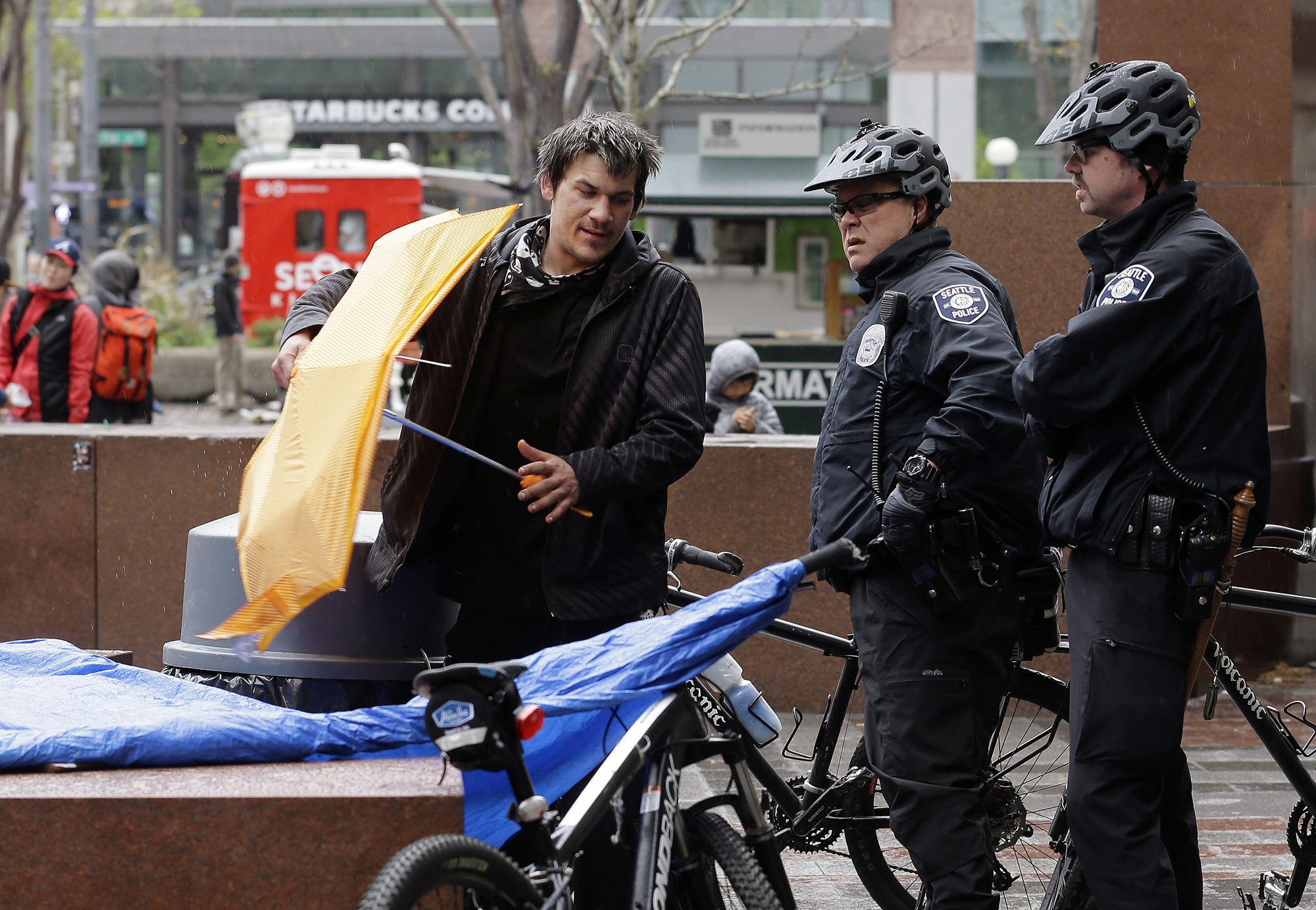 Seattle police Officers Matt Chase, right, and Tom Christenson, second from right, tell a man camping in a downtown Seattle park to move his belongings, Tuesday, April 7, 2015. The area they patrol has been the source of many referrals to a first-of-its-kind program called Law Enforcement Assisted Diversion, aimed at keeping low-level drug offenders and prostitutes out of jail and receiving services for housing, counseling and job training. (AP Photo/Ted S. Warren)

At the urging of local elected officials, Seattle’s nationally recognized alternative to arrests is moving in a new direction, toward an approach that relies less on direct referrals from police and more on responding to requests for service directly from the community.

The move by the Law Enforcement Assisted Diversion (LEAD) program, which has long partnered directly with local police, comes as the city begins its work to shift public safety away from law enforcement and toward a more community-based model. As part of that approach, members of the Seattle City Council and King County Council are proposing that LEAD's funding be contingent on expanding its scope beyond just law enforcement referrals.

In no longer requiring referrals to come from the police, the renowned diversion program could be key part of a response to the mental health and substance use dispatch calls that advocates and elected officials say should not be the responsibility of police.

For co-founder Lisa Daugaard, it's an opportunity “to start really transforming what is presently more of a theoretical conversation about how police don't need to be involved most of the time into an on-the-ground reality.”

In a world where police respond to fewer calls, LEAD would be only one piece. The advocates who’ve found a sympathetic ear in City Hall are proposing a network of organizations to replace what currently falls to police.

“This is about a process not just for defunding the police, but creating an entire new paradigm for how the city distributes its funding and invests in community,” Angelica Chazaro, a University of Washington law professor and member of King County Equity Now, told the Seattle City Council Wednesday.

But few other programs have built a foundation and positive reputation like LEAD, which already received $6 million from the city for 2020.

The LEAD program launched in Seattle in 2011. As police officers arrested large numbers of people of color for low-level offenses like drug use, shoplifting or sex work, LEAD sought to provide a different path. Instead of arresting the person, why not offer case management instead?

The model is unique for a number of reasons. For one, while “diversion” programs are common, they almost always become available after arrest, not before. LEAD also subscribes to a “harm reduction” model, which means clients are not given ultimatums about sobriety or relapse and are not funneled into jail if they don’t immediately succeed.

But perhaps its most distinctive trait has always been its close collaboration with the very systems it was trying to improve: police and prosecutors. That appears about to change.

Historically, people are referred to LEAD directly by police officers. Even if an officer does not make the initial contact, someone within the Seattle Police Department must sign off on all referrals.

At its earliest conception, the model made sense, said Daugaard. The two primary goals of the program were to improve contact with police and the criminal legal system and also to connect people with intensive and intimate case management. By convincing and giving authority to police to make referrals, it could accomplish both goals simultaneously.

But in recent years — and particularly since the beginning of the COVID-19 pandemic — the paradigm has shifted. Police officers are not making as many referrals to LEAD as they once were, said Daugaard.

Additionally, since COVID-19 has arrived, even fewer people are being arrested or detained, as the city and county seek to reduce inmate populations for public health reasons.

The result is that the significance of LEAD’s first goal — to create better interactions with law enforcement — has diminished and may, in fact, stand in the way of its second goal of connecting people with quality services. And, Daugaard said, LEAD does not want to be seen as encouraging further law enforcement interaction as a way to get people the help they may need.

“It's not feasible for the police to be playing this role, nor does it make sense in system design,” she said. “At this point 10 years ago, it did, but today it doesn't.”

The move away from law enforcement is spurred by a proposal from Councilmember Lisa Herbold to withhold funding for the program unless LEAD expands its operations beyond police. But its operators and founders support the move. By no longer relying directly on police, LEAD will be freer to take organic referrals directly from community members or as people leave jail without needing approval of a law enforcement official, said Daugaard.

Daugaard said police can and should still refer people to LEAD, but that law enforcement interaction would no longer be a prerequisite.

Since protests began this spring, catalyzed by the death of George Floyd in Minneapolis, the once-fringe idea of “defunding police” has moved directly into halls of power at warp speed. Seven of nine members of the Seattle City Council have expressed varying degrees of support for and paths toward cutting the Seattle Police Department’s budget by half.

There’s unanimous support in City Hall for undertaking an autopsy and restructuring of the Seattle Police Department, in particular when it comes to officers responding to people experiencing homelessness or a mental health crisis. Seattle police responded to more than 16,000 calls for people in crisis last year, which often ended with police committing those people to involuntary treatment or arrest.

Mayor Jenny Durkan said she supports finding alternative first responders to those kinds of situations and Councilmember Andrew Lewis has proposed setting up a new public safety department and 911 system separate from police.

Even Seattle Police Chief Carmen Best has said that “officers end up on the front lines of all of this stuff that we don’t need to be at the front lines of. A lot of times we have to be mental health providers or work on drug addiction issues, but that is the state of the city.”

But while there’s agreement on the need to reshape responses, the speed and aggression of that undertaking is a point of contention.

At issue, in particular, is what might take its place. Durkan has stressed the complexity of this task and even excoriated the city council for what she believes is an “irresponsible” march toward cutting the police without laying the proper groundwork.

“All of these potential areas for transformation are deeply complex,” she said earlier this week.

The Seattle City Council, for its part, has largely taken its cues from several groups that have formed amid the protests, namely King County Equity Now and Decriminalize Seattle, both of which are pushing for dramatic cuts to the police department and increased responsibility for community organizations in managing public safety.

Those conversations moved forward this week, as the council began to meet with members of both organizations.

Nikkita Oliver, former mayoral candidate and a well-recognized voice in the ongoing protests, acknowledged the task would be complicated, but that the funding shift should begin now regardless.

“It is clear that we’re not going to be able to just, tomorrow, hop in and have a fully community-led, community-based public safety initiative,” she told the council Wednesday. “But if we don’t take seriously the investments and prioritize the capacity building and technical support of organizations that we’re going to expect to take on that work, then we won’t be able to hit the ground running in 2021.”

Daugaard agreed the work would be complicated. Setting up an alternative 911 response would, in some ways, be the easy part. It’s what happens when the responders show up that’s difficult.

"It requires an ability to really listen, really respond to individual circumstances, establish trust and actually meet people's needs rather than referring them on to some other system that's not going to actually meet their needs," she said.

Despite some of the early headlines about a “veto-proof” majority of the city council ready to cut 50% of the SPD’s budget, there’s some nuance among those who’ve expressed support for the goal. While Councilmember Kshama Sawant is ready to make the reductions this year, others have sounded notes of caution.

Herbold said the reality is more complicated than the headlines and that members of the council are still coalescing around a path forward. She said she’s received “hundreds of emails thanking me for a vote I haven’t taken yet.”

For Daugaard, the pressure applied by the protesters to tear down the current system is the only thing that could lead to something different. “What we found is that the system does not wish to be remade and it resists remaking,” she said. “And there's no doubt that we would not be having anything like the scale of a redesigned conversation that is occurring if not for the top line demands of people in the street.”