America’s problems are not caused by the President alone. But the decay in our culture starts from the top down. 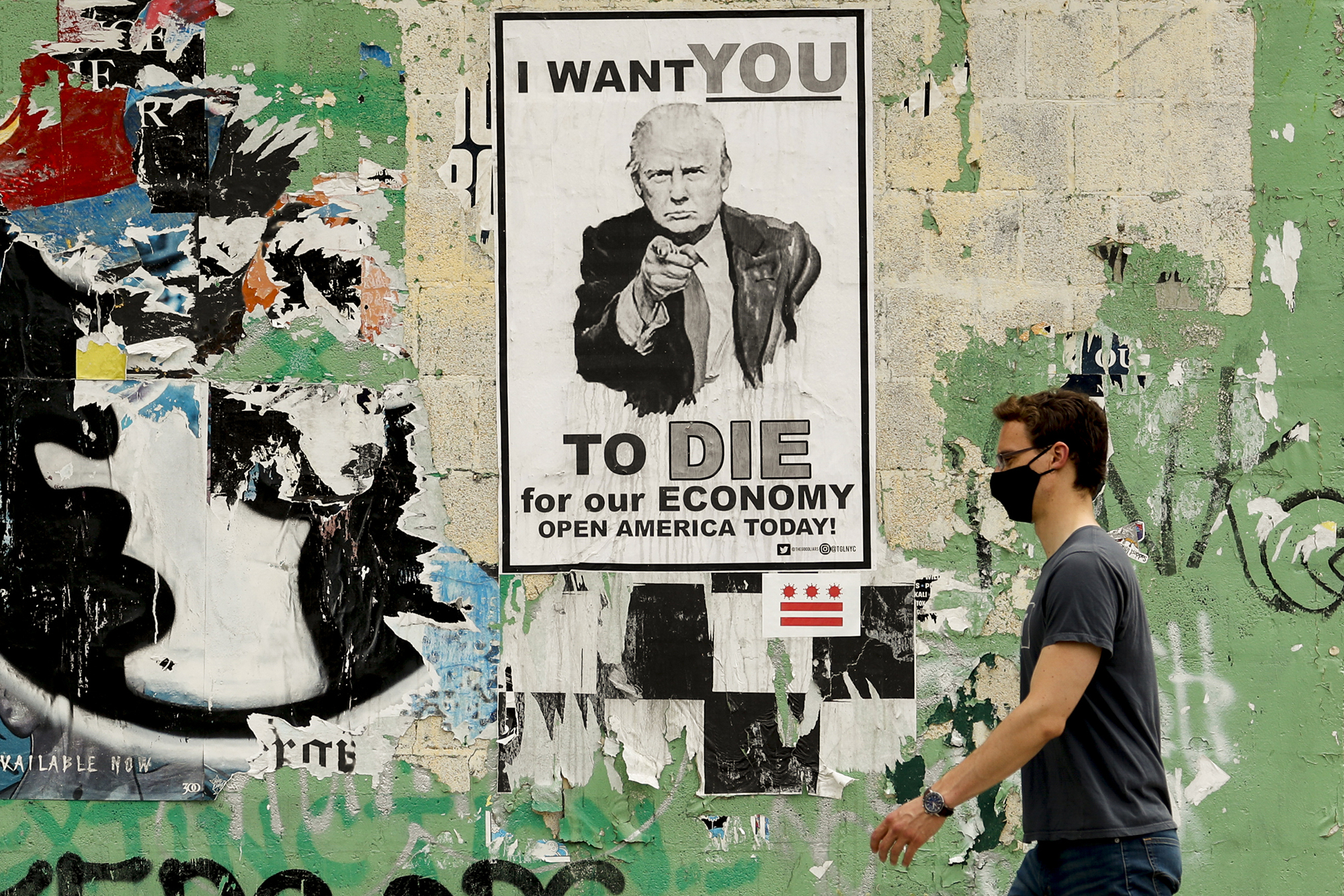 A man wearing a mask walks past a poster depicting President Donald Trump that reads "I want YOU to DIE for our ECONOMY open America today," May 25, 2020. (Andrew Harnik/AP)

They say a fish rots from the head down. If you don’t smell overripe mackerel in this country right now, get yourself checked for COVID-19.

The chief rotting head is that of our president, Donald Trump. He is no ordinary bad president; we’ve had those before. Trump is a pathological one of a kind.

An informed diagnosis recently came down from Mary L. Trump, Ph.D., his niece, whose bestselling memoir, “Too Much and Never Enough: How My Family Created the World’s Most Dangerous Man,” offers insights into Uncle Donald’s madness. As a trained psychotherapist, she dismisses facile terms like “malignant narcissist.” While the term may have some explanatory power, Mary Trump writes, there are other complicating factors behind the psychology of the world's most dangerous man.

In her examination of the Trump's family-of-origin dynamics, she lays out her belief that Donald was trouble from the beginning. He bullied his siblings repeatedly and cruelly. He could not read social cues. His parents could never control him and eventually sent him off to a military academy at age 13, with hopes that rigid hierarchies and tougher souls could straighten him out. According to Mary, Donald’s father, Fred Trump Sr., was strict, but he tolerated and even encouraged his son’s sociopathic behavior — it suited the family business. Fred Sr. did, Mary writes, what “sociopaths do: they co-opt others and use them toward their own ends — ruthlessly.” If Donald has a limited palette of emotional and human understanding, his dad is to blame.

But parental neglect or sociopathy is hardly unique to the Trumps. Although she believes Fred Sr., her grandpa, was a high functioning sociopath, the all-around family dysfunction doesn’t really answer the question of what is wrong with Donald. The family has long been concerned, appalled and even bullied by his behavior. His ascendancy both in the family business and to the White House has horrified them all, Mary writes. She also believes her grandpa and Donald fueled the decline of her own father, Fred Jr., into alcoholism and early death.

The book reads a bit like the biography of a serial killer as written by the late Ann Rule, who wrote about Ted Bundy and others. In her books, she systematically laid out the steps that encouraged a family monster. Sure, the Trumps in Mary’s telling were screwed up, but many folks have lousy families and turn out just fine. A rare few produce individuals with Bundy-like self-absorption; a gleeful joy at the suffering of others; an intense fixation on one’s own fantasies; and desires that betray an utter lack of empathy for others. Fred Sr., Mary tells us at one point, wanted his sons to be “killers.” As America’s pandemic body count heads toward 150,000, the president shrugs: “It is what it is.”

Pathology on this scale, clear in earliest childhood, indicates that Trump, family behavior aside, was born with something missing. Trump's madness is of a different sort, but it shares disturbing parallels with actual killers: He thrives on disruption, the creation of false realities, the assertion of his will and cruelty for its own sake.

The policies that flow from him are similarly wrongheaded. The most recent example, one impacting the Pacific Northwest right now, is Trump’s decision to send Department of Homeland Security forces into Portland and Seattle, as well as to other major cities. The protesters tossing bottles and incendiaries at officers and spraying graffiti on Portland's federal buildings are engaged in bad and, in some cases, even criminal behavior. But whatever is going on, it’s a domestic civil problem, not terrorism. It’s up to the local community to respond and to decide what values to uphold.

Tactics like “proactive arrests” or unnamed agents in full military garb snatching protesters into unmarked civilian minivans off the streets is illegal, unconstitutional and deserves to be called what it is: “fascism.” It stems from an authoritarian mindset — in this case, the desire Trump possesses to dominate cities run by liberal Democrats. The bleaker his reelection polls, the more dangerous he’s becoming. This is not behavior based on any authority other than his belief in himself as the be-all-end-all in terms of power. Mary Trump warns us that Donald actually has no core beliefs or principles, save what is good for him in the moment. As someone said recently, Trump’s definition of voter fraud is any election he doesn’t win. His only path to victory could be that of the berserker: creating chaos.

Missing in action during this moment of creeping fascism are traditional opponents of homeland overreach, the conservatives who have long objected to federal oppression and meddling. Where are the Malheur National Wildlife Refuge occupiers, one might ask, those armed cowboys who took over federal property and paid very little penalty for doing so? The storm troops in Portland are just the kind of invading force they claim to reject.

At the very least, don’t they owe a favor? It was an Oregon jury, after all, that acquitted the Malheur ringleaders. Why aren’t they arm in arm with Portland’s “Wall of Moms?”

For the moment, it appears they are engaged in another front, also a symptom of our current madness. Ammon Bundy, for one, is in Idaho, protesting obligatory coronavirus masks. That’s right — government overreach to protect public health is trumped by the need to resist a temporary, mouth-and-nose covering piece of cloth.

Bundy is not alone. The anti-mask uprising has spread to Spokane as well. There, Patriot Prayer’s Joey Gibson, a familiar right-wing protest figure in Portland, along with other protesters, recently staged a demonstration outside the home of a local health official. Their cause? To decry mask mandates in the name of freedom and civil liberties. Protesters claimed that masks are “satanic” and that the COVID-19 vaccine is “coming with a chip.”

Loud protests at public officials’ homes is not just for Satan-fearing right-wingers. It has become a tactic in Seattle politics as well, and not something that will help the mental health of those subjected to it. Protesters have demonstrated at the homes of Mayor Jenny Durkan — whose address was protected because of threats she received dating back to her time as a federal prosecutor — and city council members they disagree with, in some cases vandalizing their property. Some public officials have been doxed as well. The objective in these instances isn’t to persuade but to intimidate. Other city council members have reportedly received threats over their efforts to defund or reform the police. All of this has elicited a warning from city council President Lorena Gonzales, who supports protest, but asked demonstrators to stop “personal attacks, intimidation and potential violence.”

People in public service know it can be thankless and difficult work, but intimidation is wrong, even more so when one is protesting institutional violence. Anyone who has been stalked and threatened previously cannot help but have their own mental health tested by angry people at their door. It’s the kind of trigger that can have consequences for entire families. People might intimidate or threaten during political protests out of legitimate outrage and pain, but potentially provoking trauma in others will not heal one’s own. “[E]veryone … deserves the right to feel safe and secure in their own home,” Gonzales said recently, whether you agree with them or not.

America’s problems are not caused by Trump alone, but his mental instability is infectious. His attempts at a federal crackdown have aggravated civil unrest. He has inflicted the economic and health disaster of the mismanaged pandemic via whatever pathology with which he entered the world.

We need saner policies. We need healthier and resolute public officials to enact reforms. We need bigger coalitions to overcome the fragmenting forces that tear at us. We need to wear masks to contain the contagion of crazy all around us.

The fish is decaying from the head down. Rational, nonviolent resistance from the bottom up is our best hope of overcoming the rot.