From the Northwest to the White House: The fascists are here

We've failed to warn against fascism in the past. Let's not make that mistake again. 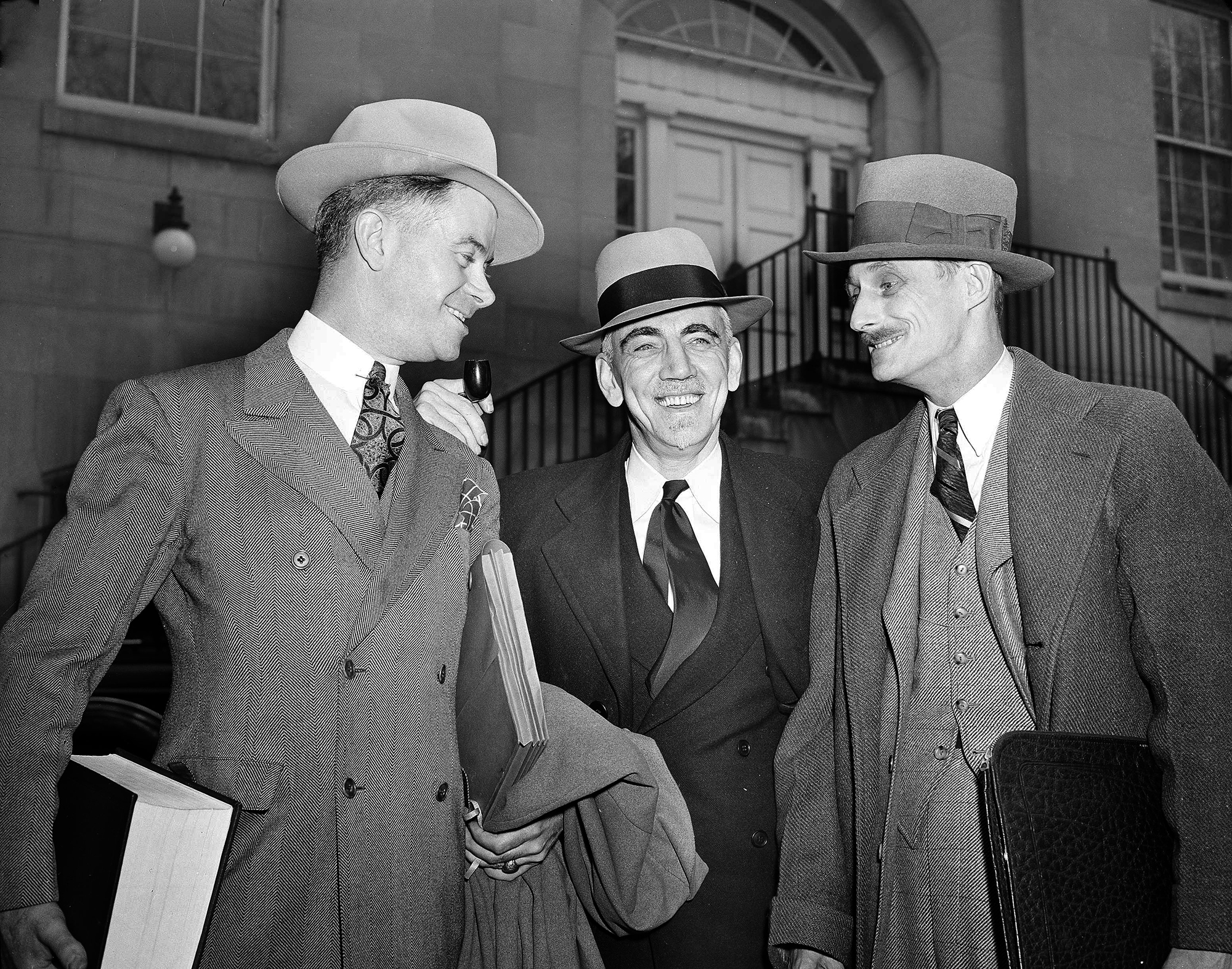 William Dudley Pelley, center, former leader of the Silver Shirts, is escorted from jail to Federal Court in Indianapolis, Aug. 3, 1942. Pelley testified in his trial on charges of sedition. (AP)

At noon today I am giving a talk, sponsored by Seattle Holocaust Center for Humanity, on a series of stories I’ve done since 2015 about the roots of fascism in the Pacific Northwest.

I’ve focused on the 1930s and early 1940s in the run up to World War II. At that time, representatives of Adolf Hitler’s Third Reich were stationed in Seattle and other American cities, spreading Nazi propaganda, organizing German Clubs, gathering intelligence, encouraging groups like the German-American Bund to promote the will of the Fatherland and socializing with the city’s civic elite. Hate in the region didn’t start then. But before the war, there were many sympathizers of what was euphemistically called the “New Germany.”

These Nazis weren’t alone in their sympathies. A former Hollywood script writer named William Dudley Pelley had a near-death vision in the late 1920s. He met Jesus and decided his destiny was to be the self-anointed “American Hitler” and founder of the equivalent to the paramilitary Nazi brownshirts in this country called the Silver Legion, better known generally as the Silver Shirts. He moved his movement’s headquarters temporarily to Seattle in 1936, while he ran for president on the fascist “Christian Party” ticket. The party had a full statewide slate on the Washington ballot, from governor on down. Its candidates lost bigtime, but at the party's peak the Silver Shirts nationally had 15,000 to 20,000 followers among the white middle class.

Here, Pelley's ardent fans built him a log cabin lodge in Redmond, where he could gather with his followers, relax and proselytize. He recruited a number of Washingtonians into his organization, including his new second-in-command, a Seattle café owner named Roy Zachary, who became his “field marshal” and was charged with spreading a message nationwide of white supremacism, hate, anti-Semitism and violence. Zachary infamously urged the murder of President Franklin D. Roosevelt; he claimed Roosevelt was secretly Jewish. Pelley later said that if he’d been elected in 1936, he would have implemented Hitler’s plan in America.

We beat the Nazis in the war, and Pelley went to prison for sedition, eventually giving up politics entirely. But he left a legacy still felt in this region and across the country. False anti-Semitic memes that he invented, including the idea that Benjamin Franklin wanted to expel Jewish people from America, still surface. Osama bin Laden even referred to that one in 2002.

Though a mostly marginal character, Pelley has had far-reaching influence. Former followers joined, helped shape or co-created postwar right-wing groups, including the Posse Comitatus and Richard Butler’s Aryan Nations of northern Idaho infamy. Some credit him with inspiring the so-called Christian Identity movement, which reflects the Silver Shirts' blend of fascism and Christianity. A new generation of such groups has surfaced, promoting secession, white separatism and hate. Like the Bund before them, which rallied with swastikas, American flags and banners of George Washington, these groups often present themselves as all-American, true patriots fighting for the Constitution and a white Christian nation.

Worse, they are in the White House. Donald Trump has long pandered to these sentiments in his followers. He has time and again displayed authoritarian impulses and instability. In his response to the George Floyd and Black Lives Matter protests, he has pushed extreme tactics. He has had peaceful protesters gassed and driven from a public park for a personal photo opportunity to display himself holding up a Bible while surrounded by members of his cabinet and the chairman of the Joint Chiefs of Staff in battle dress. He has demanded that governors “dominate” the streets. He’s tweeted about shooting looters, echoing racist appeals of the near past. His government has put security forces in the street without ID, name tags or uniforms. Worse, he has demanded that American troops be activated to deal with the protests because the police, widely recorded brutalizing demonstrators, are not being tough enough.

Trump has said he wants “antifa” listed as a terrorist organization. The name literally stands for anti-fascist. As the nation recently remembered the anniversary of D-Day, some pointed out that this event was perhaps the peak of anti-fascist American pushback. Trump, apparently, is profa.

Some street fighters might engage in criminal behavior, but to label them terrorists is to prove their point, that the fascist impulses they resist are here. This is underscored by police departments across the country. Their militarized tactics have revealed much about institutionalized police violence.

It is especially shocking in Seattle, where the police know they are under a federal court’s scrutiny for excessive use of force. The Seattle Police Department clearly did not learn, or has forgotten, the bitter lessons of the World Trade Organization demonstrations of 1999, which were marked by severe overreaction to mostly peaceful protest. Seattle went through lengthy after-action analysis. Law enforcement’s failures in planning and execution were largely at fault for what occurred, though some consultants argued that SPD wasn't tough enough. Norm Stamper, the police chief at the time, has since retired, apologized and become a leading advocate for police reform. Pledging, and failing, to hold back the tear gas temporarily is an insignificant concession. The police will have to stop baby stepping reforms to regain credibility.

Trump’s allies mouth opinions that are often jaw-dropping and in lockstep with authoritarian values. In a recent New York Times op-ed, U.S. Sen. Tom Cotton, a Republican from Arkansas, called for bringing in the military to take control of the streets with an “overwhelming show of force” where looting has occurred or “antifa” anarchists have acted out. In the piece, he elevated such violence to “insurrection.” There is nothing in that op-ed that the president himself does not believe. A New York Times columnist, Michelle Goldberg, wrote a response entitled “Tom Cotton’s Fascist Op-ed.”

Trump’s appointees also echo ideas that are familiar in the fascist playbook. According to the investigative news outlet ProPublica, Merritt Corrigan, the new White House liaison for the U.S. Agency for International Development, has written, “Liberal democracy is little more than a front for the war being waged against us by those who fundamentally despise not only our way of life, but life itself.” She has also railed about “our homo empire.” In other words, democracy is a gay plot to destroy democracy and human life. Hear in this the Nazi sentiment that democracy was the “canal” that let poisons like communism and Jews destroy Germany. Trump picks loyal “conservatives” to spread an anti-democratic message to the world. Is it for this that we won the war? Is that the sound of spinning graves in Arlington or Normandy?

America didn’t jump into war with Hitler. It took the catalyzing event of Pearl Harbor, an event Pelley claimed was greatly exaggerated. The country unified against the Axis powers. But up to that point, a substantial America First movement, along with the Bund, promoted letting Hitler go unchecked. Our moral authority was suspect. Hitler copied our eugenics laws and embraced our white supremacism. His propaganda machine likened our treatment of Native Americans to his treatment of the Jews. How could we object?

Newspapers in Seattle and across the nation had tried to convince people that Hitler meant no harm. The Seattle Times ran a March 1933 editorial under the headline, “No Persecution,” with this definitive statement “There is no organized mistreatment of Jews in Germany,” despite ample evidence to the contrary. That was exactly the line used by Hitler propagandists who socialized at tennis clubs and charity events with Seattle’s prewar elite.

Millions of Americans didn’t believe Hitler would do what he said he’d do or didn’t much care. The war finally woke them up to the existential threat he represented to our country and the world. That slow awakening wasn’t just apathy; for some people it was a result of general sympathy with his agenda.

Trump is not Hitler, but you don’t have to be to represent American fascism. The protests triggered by George Floyd’s murder are our wakeup call. The fascist mentality is policing the streets and is dug in at the White House. It’s time we see it for what it is.