What 13,000 wildfires teach us about Washington forests

A deep dive into data from the Department of Natural Resources reveals some scary trends and surprising findings. 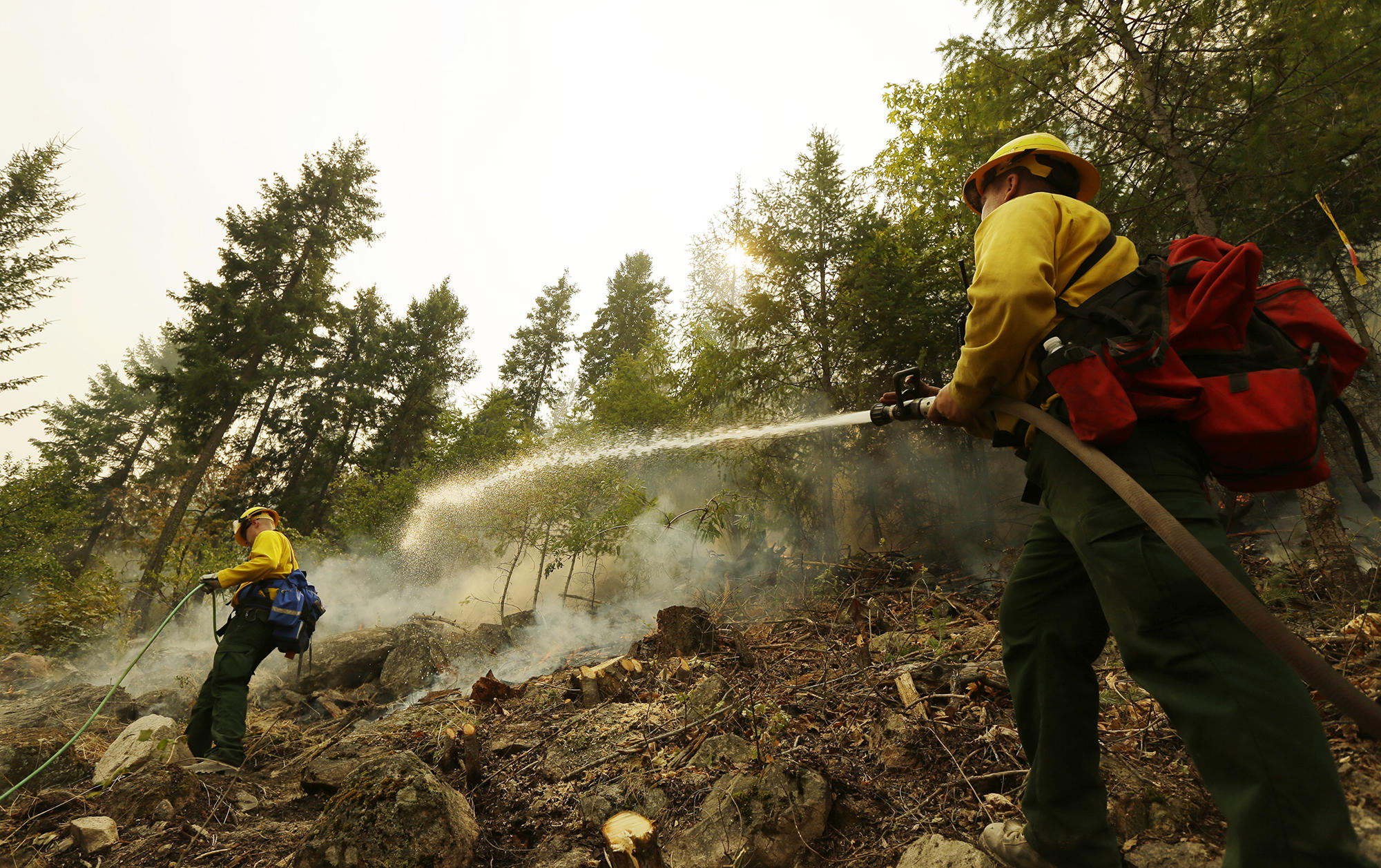 Colby Lyon, right, of the Central Region Strike Force Team II, sprays a hillside with water as he works with members of the Washington National Guard to fight the First Creek Fire, Aug. 18, 2015, near Chelan in Central Washington. The troops in Washington state were part of a massive response to blazes burning uncontrolled throughout the West. (Ted S. Warren/AP)

By any measure, this year’s wildfire season was a scorcher. From weeks of oppressive smoke to explosive blazes that destroyed an entire town and culminated in the death of an infant, this year’s catastrophic fires affected nearly everyone in Washington.

The state Department of Natural Resources is Washington’s largest firefighting organization, with about 600 year-round and seasonal employees working to control fires on more than 13 million acres of forestland across the state. DNR has kept records of every reported wildfire in the state since 2008. With the help of Angie Lane, DNR’s assistant division manager of plans and information for wildfire, Crosscut took a deep dive into these 13,452 fire records to highlight some numbers that help put this year into context and tell the broader story of our state’s fires.

Fire season in Washington lasts from April through the end of October, and this year, the Department of Natural Resources responded to 1,851 fires — more than any other year this decade. Thirty-one percent of those fires started on the west side of the Cascades; westside fires burned  2,615 acres this year. The majority of fires that DNR has responded to (59%) have been on the east side of the Cascades, and those fires also burned vastly bigger expanses of land: 493,683 acres. The year 2020 was second only to 2015 for most acres burned in a single season this decade.

Starting with a spark

Most fires in Washington happen east of the Cascades. That’s normal. Ecologically, the plants and animals on that side of the state are more fire-adapted. The ponderosa pines and native grasses of the eastern slope evolved alongside more regular fires than, say, the mossy Sitka spruce or other inhabitants of the Hoh Rain Forest on the Olympic Peninsula.

But not everywhere on the east side endures the same wildfire pressure. Forty percent of all fires in the past 12 years have started in only three counties in the northeast part of the state: Spokane, Stevens and Okanogan. Spokane County alone has seen 2,067 wildfires begin there in the past 12 years. In contrast, Adams and Whitman counties, also on the east side, have respectively experienced just six and five wildfires over the same time.

Major fires in the state that have spread to 10,000 acres or more have also occurred in just 10 counties since 2008. Okanogan County has been most frequently hit by these large fires, having experienced 10 bigger than 10,000 acres in that time. Even scarier, five of the state's six megafires since  2008 — blazes that exceed 100,000 acres — happened wholly or in part in Okanogan County. (Although huge burns on the west side of the state aren’t unheard of, they’re comparatively rare.)

Beyond geography, most fires start on private land: 61% in the time since DNR started keeping track. The second-most likely place for a fire to have started is on public land the DNR managed, followed by land managed by the U.S. Forest Service.

How big do most fires get?

Of the 13,452 fires that have ignited across the state in the past 12 years, only 20% — 2,736 —  have grown larger than one acre. But even relatively small fires can be destructive — especially in places where housing density is high, or piles of vegetation burn close to buildings. That’s one reason why DNR fire crews respond to westside fires at a higher rate than eastside ones. Though most fires west of the Cascades don’t get very big, higher population density means even a small fire could be just as dangerous to people and property as a larger fire tearing across many acres of sparsely populated prairie.

About 9% of all fires haven’t gone anywhere: That’s how many have been called in and recorded, but burned a grand total of zero acres. The vast majority of wildfires (71%) have burned less than an acre in total before they were extinguished.

The two most common causes of human-caused wildfires are debris burns (17% of all fires) and recreation (15%). The highest number of wildfire starts associated with recreation came from overnight campers. But there are tons of ways a fire can start: This year, the highest tally of fire starts came from people lighting piles of yard waste.

DNR tracks 11 big categories of reasons that fires start (including “undetermined” and “under investigation,” which don’t offer answers so much as provide a couple of different reasons why we might not know).

After debris burns and campfires, other significant causes include power lines, arson, fireworks, vehicle fires that get out of control, structure fires that spread beyond the building where they started, smokers and kids. Logging, railroads, firearms and more bizarre things like electric fences have also sometimes led to wildfires, but those aren’t quite as common.

People start the vast majority of fires in Washington (about 80%), and mostly by accident, although people do deliberately light things sometimes. Known arsonists have caused 3% of all fires over the past 12 years. Lightning accounts for about 20% of all fire starts statewide. It’s more common on the east side of the Cascades, and tends to cause more fires of consequence there than on the west side.

Children started 15 fires this year and 336 since 2008. Kids above 10 were more likely to start fires than younger kids. Those between 3 and 9 started only 19% of all the child-started burns over the past 12 years.

“We track that because that drives our programs in the schools,” says Lane, the DNR manager. “There are a lot of states that have prevention programs that really get into school programs.”

Older people who enjoy playing with matches are more likely to fall into the pyromaniac category: They have started 68 fires over the past 12 years, the largest of which reached 480 acres. The state includes pyro-started fires under the more general arson category, and it’s fire investigators who ultimately determine who falls into that category.

DNR is required by Washington state law to investigate the causes of all wildfires on forestland and to try to recover associated costs if the person who started it did so with criminal intent. This means that DNR can bring criminal charges against arsonists and can take people to court. Any money recovered as part of this process goes into the Washington state general fund.

Another odd category classified under arson is “grudge fires,” those that intentionally target a person or place because of an argument or grudge. Only four have been recorded since the state started keeping track, but fires directly attributable to any kind of arson have burned 2,201 acres since 2008.

“[This year], arson and escaped debris fires have exceeded our 10-year average,” says Lane. “For folks who live in Washington and who should be worried about wildfires impacting their communities, that is something that they have control over.”

Of course, DNR can’t know why or how every fire gets started. Although the agency is required to investigate the causes of all wildfires in the state, because of the destructive nature of fire itself, it’s not always possible to know why one happens.

“There are going to be those times when you just have absolutely no clue whatsoever,” says Lane. “The evidence burns up. That would be ‘undetermined.’ ”

Fires that DNR has classified as having an “undetermined” cause can still be a big deal: 26 fires with unknown causes have burned more than 100 acres apiece. Slightly more than 10% of the fires that have started in the past 12 years fall into this category.

Turning up the heat

When analyzing recent fire data, it’s almost impossible to ignore the climate question. The three largest fires in Washington state history have all occurred since 2014: the Carlton Complex in Okanogan County in 2014, the Pearl Hill fire in Okanagan and Douglas County this year, and the North Star fire in Okanogan County in 2015. What can be alarming about these megafires is that they don’t typically occur in isolation. The Carlton Complex, for example, started as four small lightning-caused fires that merged into one, and the North Star fire raged at the same time as three other massive fires to the east.

The Pearl Hill fire, which reached 223,731 acres, was just one of many fires that blazed across the state on Labor Day of this year.

Those Labor Day fires were unique in that an intense windstorm during the driest part of the year meant that perfect fire conditions were happening in many places across the state at exactly the same moment, stretching the ability of response teams to be in all those places at once. Our statewide ability to respond to fires is always limited by the number of people and resources on hand to help at any given moment. That’s one reason why the climate extremes that are expected to intensify throughout this century could be cause for concern. Climate scientists say that earlier snowmelt, drier summers, rising temperatures and more frequent heat waves brought on by climate change could all contribute to increased fire risk.

But Lane stresses that regardless of weather or climate, everyone can to try to keep fires in their personal lives from getting out of hand — by double checking their debris piles before walking away, making sure campfires are put out before going to sleep or checking to see if there’s a burn ban in place.

“It’s all about preparedness,” she says. “We live in the West. We’re always going to have fire. If they’re in one of those environments where fire happens every year — like Spokane County — then it’s up to the community working with fire agencies to do what they need to do to protect themselves.”