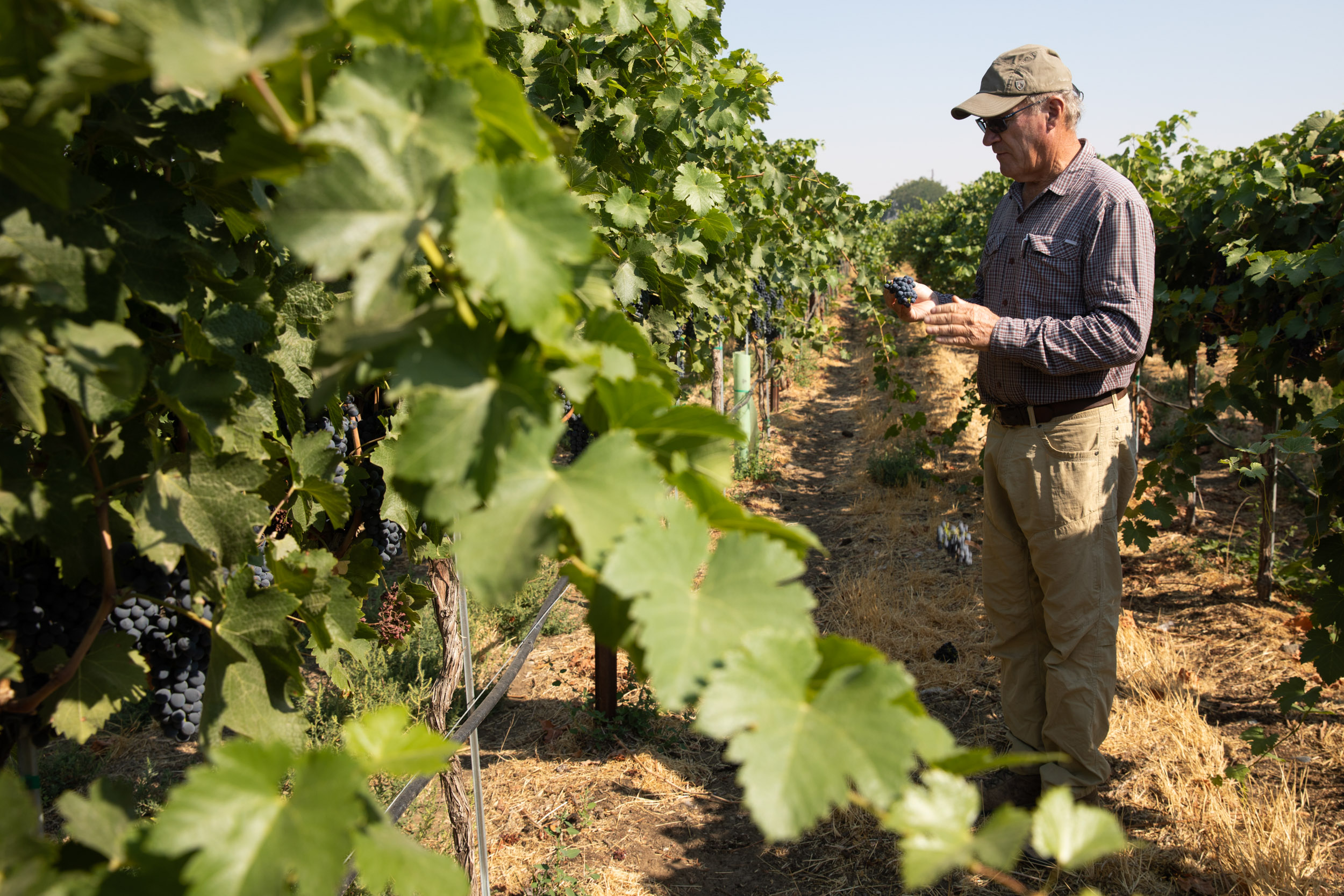 Dick Boushey, owner of Boushey Vineyards in the Yakima Valley, harvests grapes on Aug, 31, 2021. Boushey has been growing wine grapes in Yakima and Benton counties for more than 40 years. (Matt M. McKnight/Crosscut)

Dick Boushey has been growing wine grapes in Yakima and Benton counties for more than 40 years. The 70-year-old Boushey and his employees grow 23 grape varieties on vineyards stretching over 295 acres.

Managing vineyards requires precision. Different varieties of grape have to be matched against the right temperatures, soils and moistures. Sugar and acidity must be considered. Changes in temperature and water availability have major effects. So, Boushey says, does smoke from wildfires.

That worries him, and greatly complicates his work. Rising temperatures are affecting Washington’s wine grapes, including Boushey’s vineyards along the border of Yakima and Benton counties and on Red Mountain, next to the Tri-Cities. 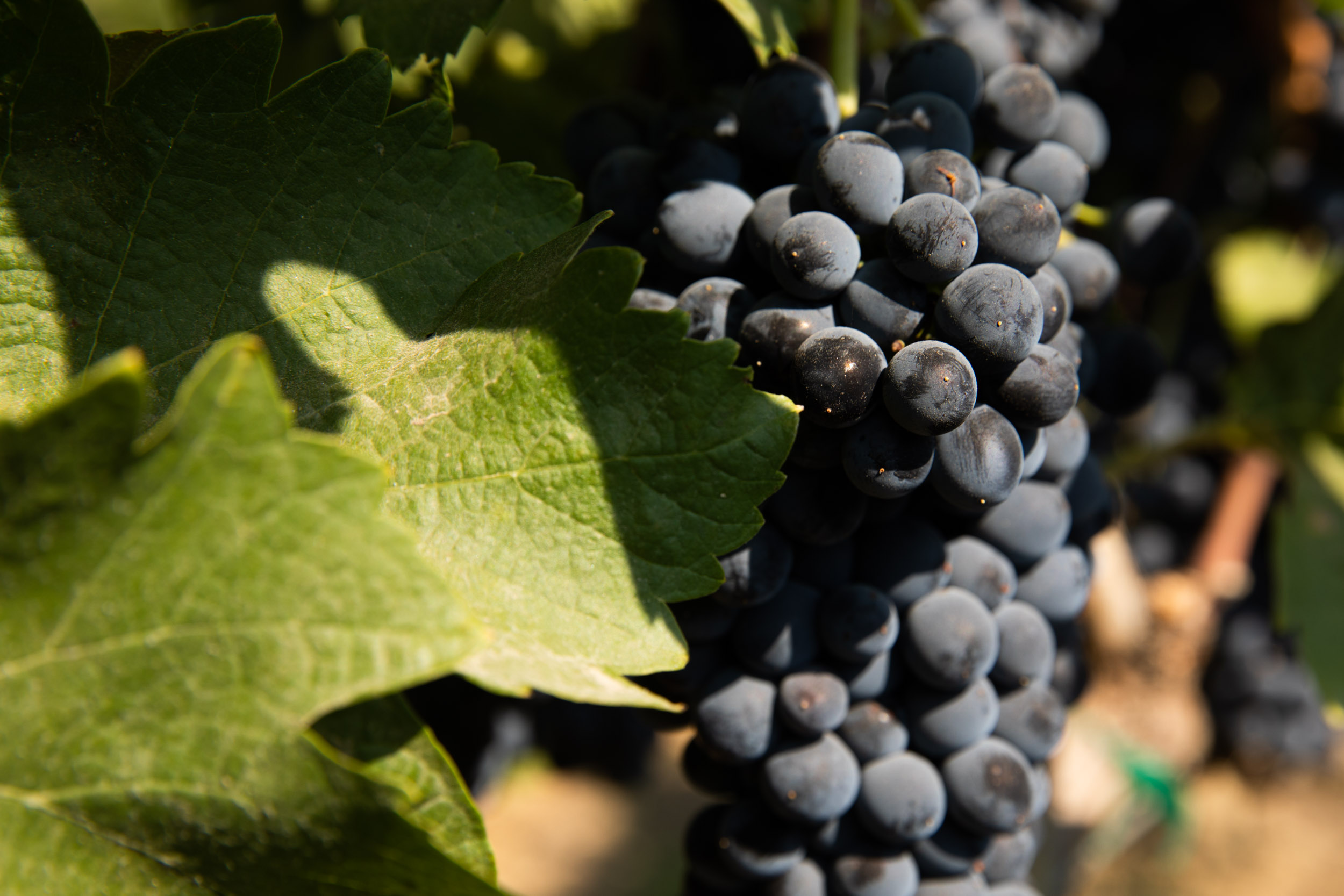 Grapes yet to be harvested at Boushey Vineyards in the Yakima Valley, Aug, 31, 2021. (Matt M. McKnight/Crosscut)

Grapes yet to be harvested at Boushey Vineyards in the Yakima Valley, Aug, 31, 2021. (Matt M. McKnight/Crosscut)

Climate and viticulture scientists say temperatures are not rising in a neat line. But the average high and low temperatures are slowly increasing. Winters are becoming warmer. Weather records show a rough increase in average temperatures between 1980 and today to be in the 2- to 5-degree Fahrenheit range, depending on the location.

Greg Jones, a former longtime viticulture professor at Southern Oregon University and Linfield College in McMinnville, Oregon, has studied climate change’s effects on vineyards for roughly 25 years. A few months ago, he left academia to become CEO of his family’s winery in Oregon’s Umpqua Valley. He remains confident Northwest agriculture can survive the changes.

“With the slow motion of warming, people in agribusiness will have the means to adapt,” Jones said. 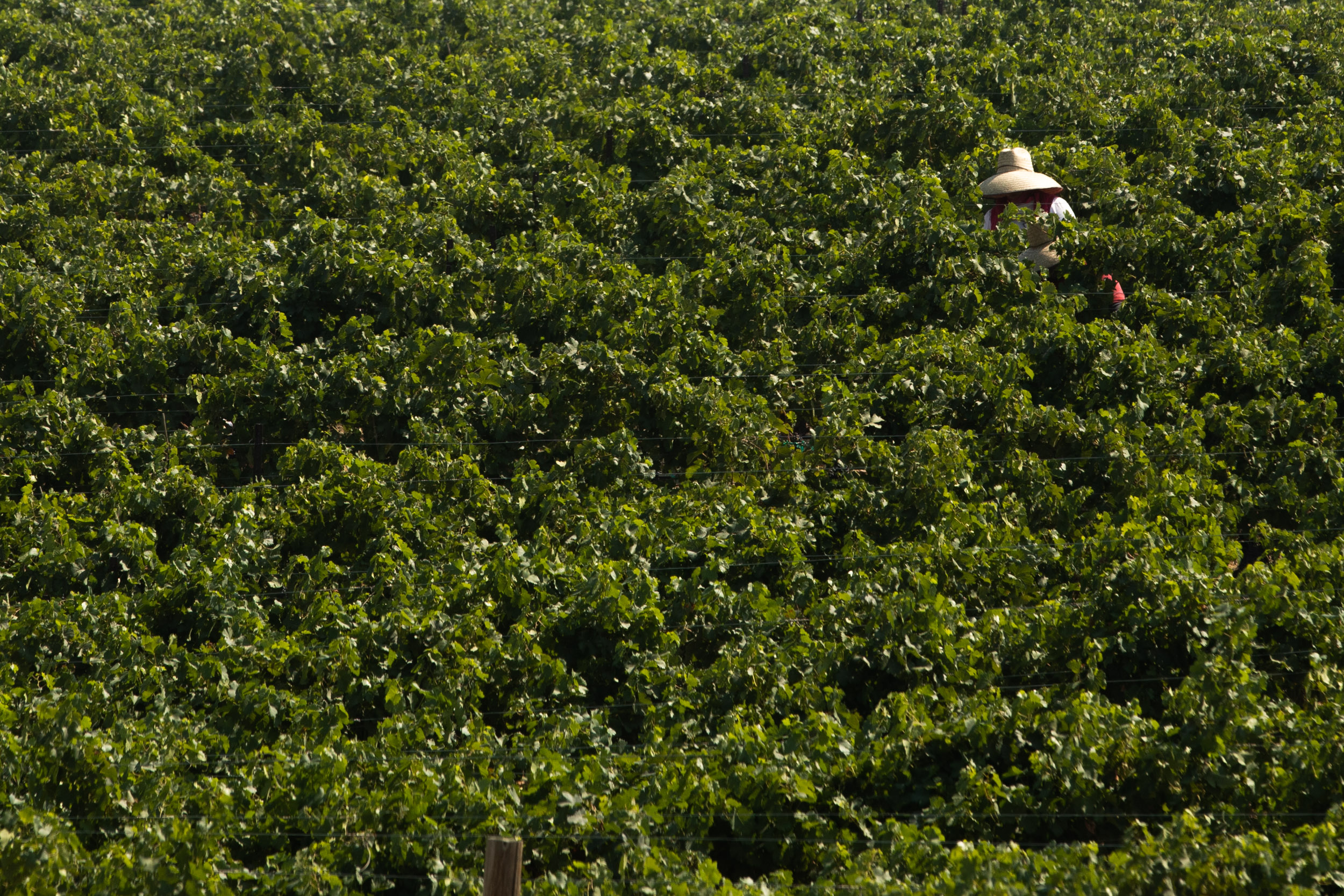 Wine is a big business in Washington state — and a growing one. While California produces the majority of wine in the United States, Washington is a distant second, producing roughly 10% of the nation’s wines. Washington’s vineyards have grown from 37,398 acres in 2010 to 59,601 acres in 2021, according to the Washington Winegrowers Association.

Much of that acreage is irrigated with water flowing from the Cascades, where higher temperatures are causing snowpack to melt earlier in the year. The shift means Eastern Washington irrigators — including vinters — get more water in the spring and less in the summer and fall. That throws vineyards out of whack.

Beyond the change in timing, there has recently been less water to go around. In July, Gov. Jay Inslee declared a drought emergency for most of the state. “Our state is under attack from the combined effects of climate change,” Inslee said at the time.

Keller said about 30% less water is going to vineyards than in the 1980s. Grape growers are conserving water with methods such as drip irrigation, allowing production to increase while the amount of available water shrinks.

An unknown factor is how warmer temperatures will affect stream flows and availability of irrigation water, Keller said. There are long-range plans to improve water storage in the Yakima River watershed during drought years. One would see a pumping station built on Lake Kachess in the mountains near Snoqualmie Pass to retain 200,000 acre-feet of water. Smaller reservoirs and water storage projects are supposed to be built in the next 20 to 30 years along the river’s tributaries to also improve storage.

“That will absolutely help us,” said Scott Revell, executive director of the Roza Irrigation District, which hugs much of the Yakima River. The Roza district irrigates roughly 72,000 acres of crops, including 10,169 acres of wine grapes.

A similar reservoir project to help Benton County farmers and grape growers is on the drawing board for Switzler Canyon, southeast of Kennewick. 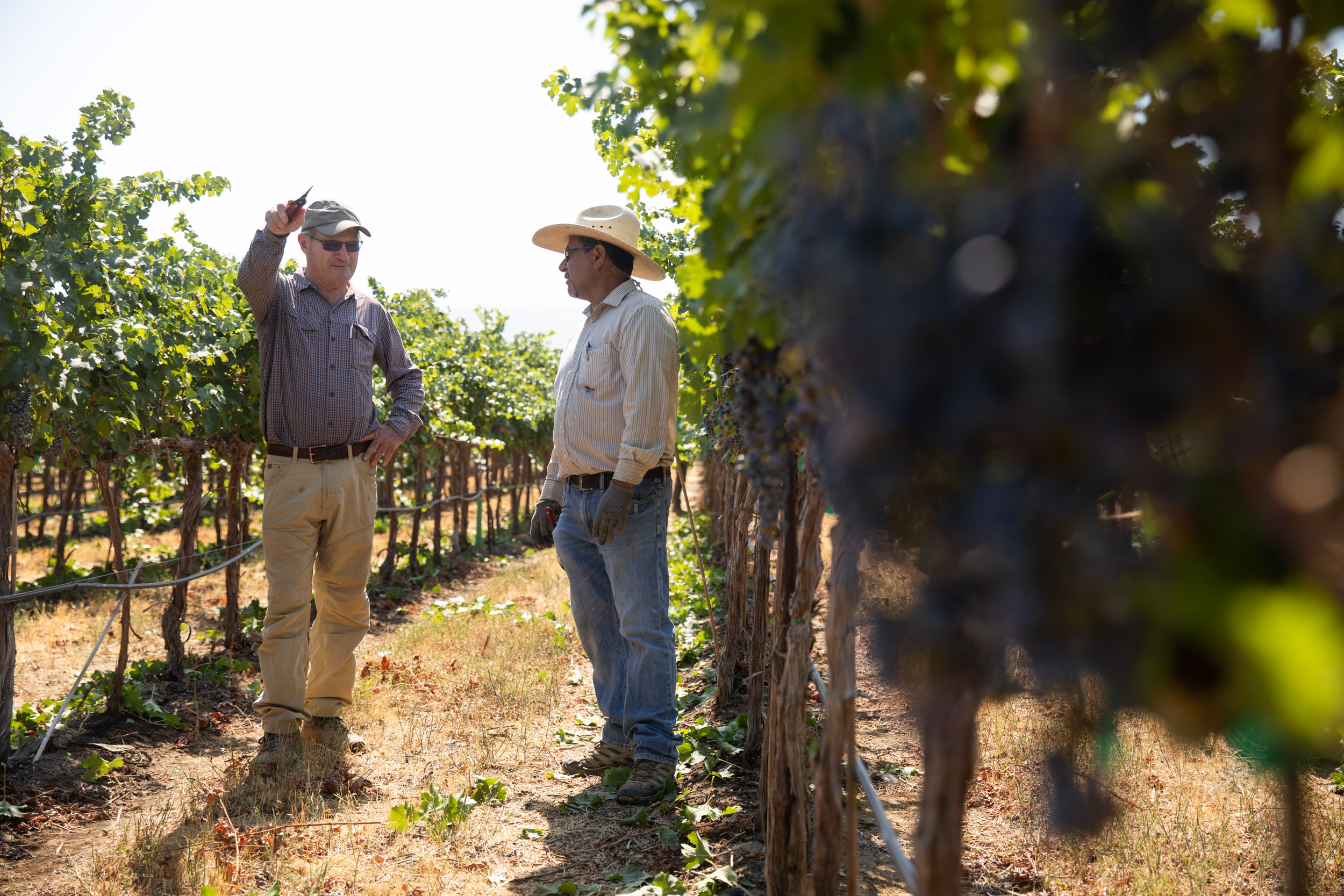 Dick Boushey speaks with Roy Garcia at Boushey Vineyards on Aug. 31, 2021. Garcia is the owner of a contract team that Boushey works with during harvest. (Matt M. McKnight/Crosscut)

Dick Boushey speaks with Roy Garcia at Boushey Vineyards on Aug. 31, 2021. Garcia is the owner of a contract team that Boushey works with during harvest. (Matt M. McKnight/Crosscut)

Another effect of global warming has been the proliferation of wildfires in the Cascades’ forests. Smoke from those fires has wafted into many vineyards, damaging an unknown quantity of grapes. While those numbers have not been tracked, several vineyard operators have said the smoke tainted their grapes.

“You don’t want to drink it,” said Keller, the WSU viticulture professor. “It’s like drinking out of an ashtray.”

In July, the Great Northwest Wine news website reported that smoke had tainted grapes of the Woodinville-based Betz Family Winery. That kept the winery from releasing its 2020 vintage wines in order to preserve the winery’s reputation.

“We never considered for one second sending wines to customers that are flawed. While it is brutal to have to do this, the decision was easy.” Betz Winery owners Steven and Bridgit Griessel said in the Great Northwest Wine site.

By email, the Washington Winegrowers Association asserted that “smoke impact is not widespread in the 2020 wines.”

“Any impact was isolated to specific areas or varieties,” an association spokesperson continued. “Each grape variety has different sensitivities to smoke impact, so just because one variety is affected, others may not be.”

Research into smoke’s effects on grapes is in its infancy. Washington State University, Southern Oregon University and the University of California at Davis are studying the subject.

“It is one of the most complicated issues to face the wine industry in a long while,” Melissa Hansen, research program director with the Washington State Wine Commission, said in a WSU press release. “The impact of smoke on grapes depends on many factors.” 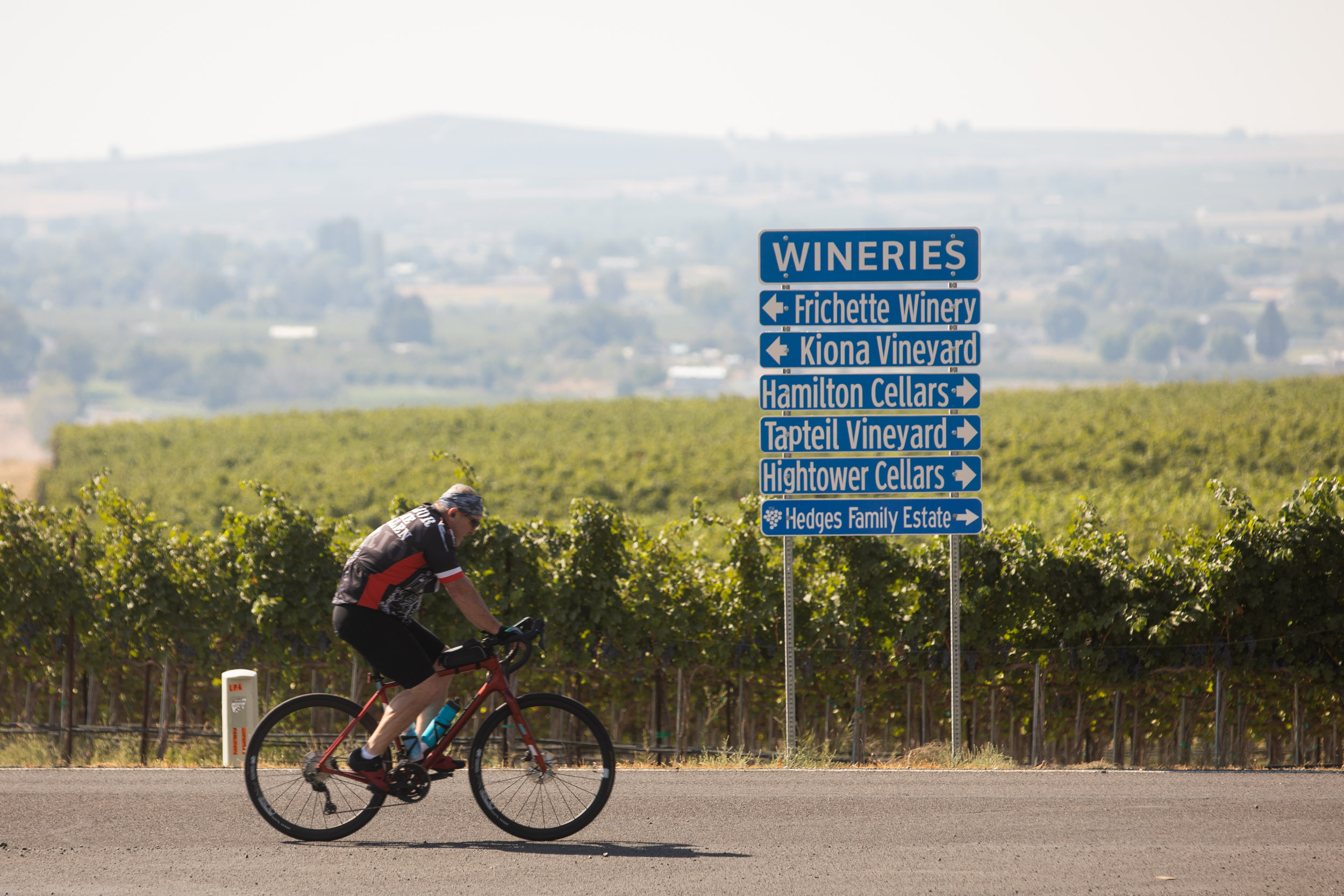 A cyclist rides by a sign directing drivers to the wineries in the Yakima Valley on Aug. 31, 2021. (Matt M. McKnight/Crosscut)

A cyclist rides by a sign directing drivers to the wineries in the Yakima Valley on Aug. 31, 2021. (Matt M. McKnight/Crosscut)

Climate change will enable diseases and pests common in warmer climes to move into Washington vineyards. But another climate migration is also taking place — grape varieties moving north and potentially to higher in elevation.

Oregon’s Willamette Valley was too cold to grow wine grapes in the 1950s. Today, increased temperatures have turned that valley into a premier place for wineries. Meanwhile, wine operations from California — already facing rising temperatures — have been taking over some Washington vineyards, said Vicky Scharlau, executive director of the Washington Winegrowers Association.

Meanwhile, wine grapes are being grown worldwide at higher elevations. In Europe, vintners are establishing more vines in England and in Scandinavian countries. Australia’s vineyards have expanded south into Tasmania. Elevations that historically have been too cool to ripen wine grapes can now accommodate them. Lower altitudes might be more conducive to other types of grapes.

In Washington, such migrations have not yet materialized significantly, although scientists said it’s likely more southern grapes will make their appearances in the state’s vineyards.

Another unknown in dealing with climate change’s effects on grapes is taste. How will wine consumers adapt to changes in the drink’s structure and flavors as grapes are subjected to experiments to deal with global warming? So psychology is expected to play a role in how the wine world will deal with climate change.

In any case, with observers saying that growers believe climate change will affect their livelihoods, experimentation in wines and grapes appears to be inevitable.

“If you’re in agribusiness and you grow the same way as you did 20 years ago,” Jones said, “you won’t be in business.”