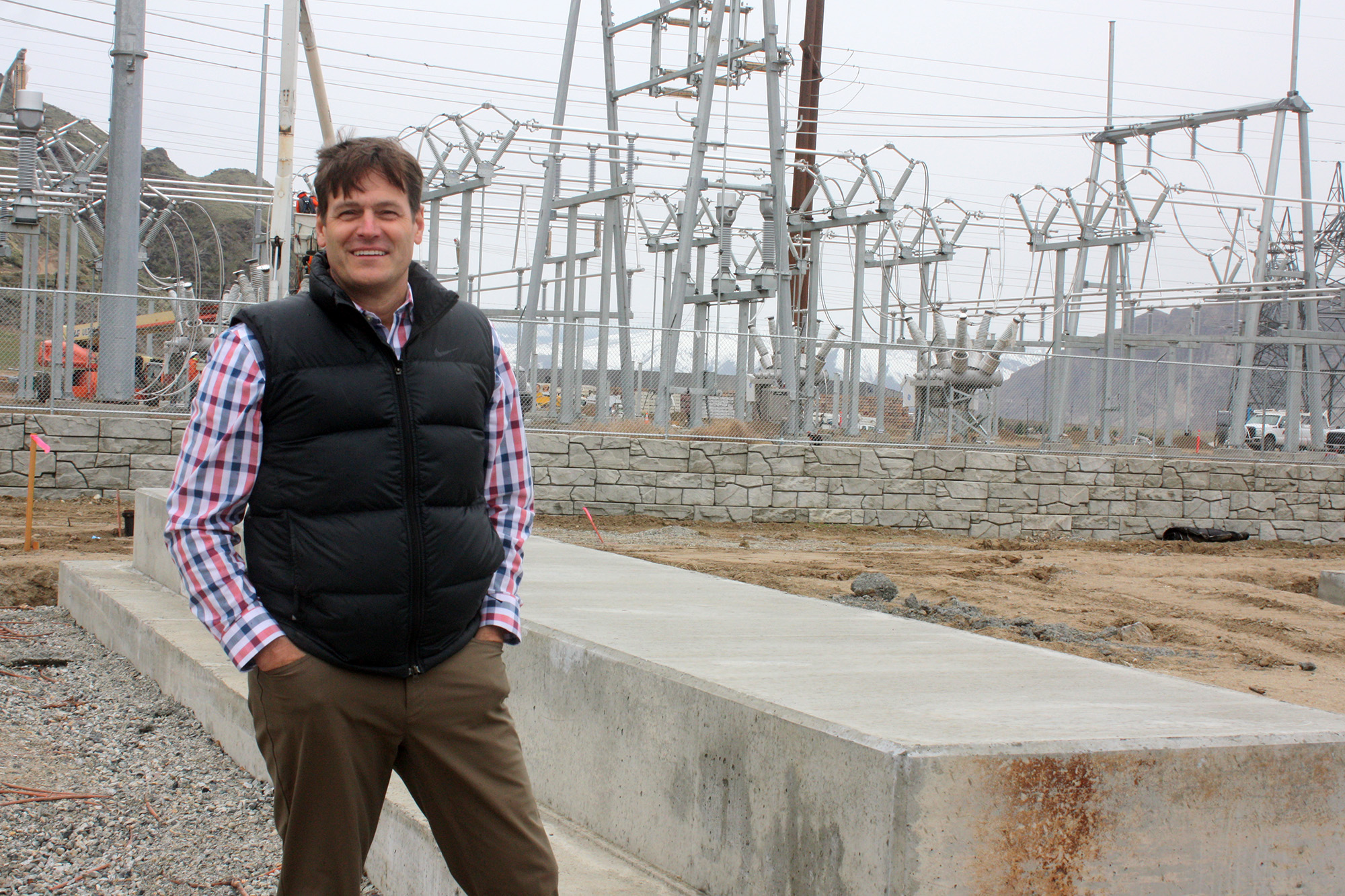 Gary Ivory, general manager of the Douglas County PUD, stands in front of the work-in-progress hydrogen plant being built near East Wenatchee. (John Stang for Crosscut)

No. 1 on the periodic table of the elements. Supposedly one of the first substances that emerged after the Big Bang. A component of maybe 75% of all matter. The key element on the cover of Led Zeppelin’s first album. Colorless. Odorless. Tasteless.

And now, it is being studied and produced as a noncarbon-emitting fuel, with the idea that it can substitute for petroleum-based gasoline as a measure to combat global warming.

Washington wants a piece of that action.

The state government is seeking $1 billion to $2 billion from the federal government to become one of four to eight regional hubs for the production and distribution of hydrogen as a fuel. Washington’s first hydrogen production plant is expected to go online in East Wenatchee in late 2022 or early 2023. The Port of Seattle is studying whether it wants to get into the hydrogen fuel business. Paccar, a Renton-based truck manufacturer, is testing 10 hydrogen-fueled semitrucks in Los Angeles. And public transit in Chehalis expects to start running hydrogen-fueled buses this year.

Last Friday, Fortescue Future Industries of East Perth, Australia, announced its intentions to build a hydrogen production facility next to the TransAlta coal-fired power plant in Centralia. So far, Fortescue has not announced any details on that plan. The TransAlta plant is due to close in 2025.

But other than the East Wenatchee project, Washington has no hydrogen fuel infrastructure.The state Legislature has earmarked slightly more than $4 million to build the state’s first two hydrogen-vehicle refueling stations in Chehalis for a local bus line and in East Wenatchee for a Douglas County Public Utility District fleet. By contrast, California has roughly 11,000 hydrogen-fueled vehicles and about 50 refueling stations.

Congress has created an $8 billion U.S. Department of Energy fund to create the regional hubs to produce and distribute hydrogen as a fuel. At least 80 proposals have been sent to the Energy Department so far.  Gov. Jay Inslee and Lisa Brown, director of the state Department of Commerce, have been working in recent months to coordinate Washington’s interests in seeking a piece of that money.

“This is a ruthless competition nationwide. It’ll be political malpractice not to leave everything on the field,” said state Sen. Reuven Carlyle, D-Seattle, a legislative leader on climate change issues.

On Feb. 24, Inslee wrote a letter to dozens of state agencies, utilities and private corporations, saying that Washington had a good chance of becoming one of the four to eight potential hubs, citing the state’s extensive efforts in combating greenhouse gasses.

“Washington has the lowest carbon intensive grid in the United States,” Inslee wrote. “The opportunity to develop truly green hydrogen and understand how it fits into a modern decarbonized economy is possible today in the state of Washington. No other region is as advanced in this area.”

The Legislature made several decisions this past session to support these efforts. Lawmakers allocated $2 million to lobby for hydrogen projects. They created an office of renewable fuels within the Washington Department of Commerce. And lawmakers created some new tax breaks for renewable energy projects.

In 2021, the global hydrogen market was estimated at $130 billion and was expected to expand 6.4% annually, according to a report by Grand View Research, a San Francisco marketing research firm. And a Februaary 2022 report by Goldman Sachs said, “Our global …  hydrogen scenarios all show stellar growth of the clean hydrogen economy.”

Electrolyzers are the workhorses that create green hydrogen by splitting water into hydrogen and oxygen. Right now, the nation’s electrolyzers consume about 0.3 gigawatt of electricity. If all of the electrolyzer projects currently on the drawing board are built, that power consumption would grow to 80 gigawatts by 2030, Goldman Sachs said. A large power plant can produce about one or two gigawatts a year. 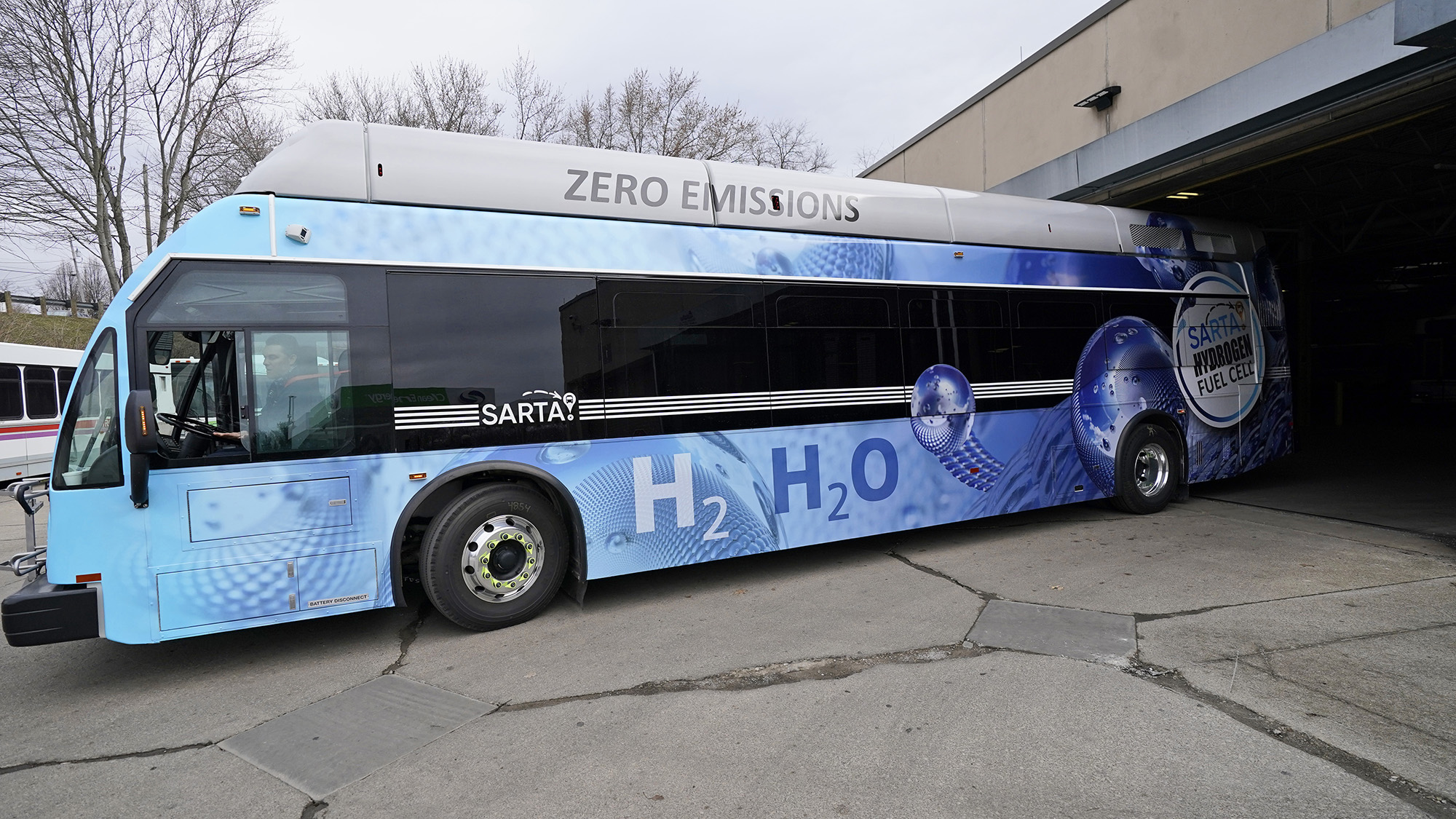 Kevin Baker, a maintenance technician, drives a hydrogen fuel cell bus out of the terminal, Tuesday, March 16, 2021, in Canton, Ohio. Hydrogen, the most abundant element in the universe, is increasingly viewed as a vital answer to troubling questions about how to slow the catastrophic effects of climate change attributed to the planet's 1.2 billion cars and trucks, nearly all of which burn gasoline and diesel. (AP Photo/Tony Dejak)

Kevin Baker, a maintenance technician, drives a hydrogen fuel cell bus out of the terminal, Tuesday, March 16, 2021, in Canton, Ohio. Hydrogen, the most abundant element in the universe, is increasingly viewed as a vital answer to troubling questions about how to slow the catastrophic effects of climate change attributed to the planet's 1.2 billion cars and trucks, nearly all of which burn gasoline and diesel. (AP Photo/Tony Dejak)

Through the Douglas County Public Utility District and possibly the Port of Seattle, Washington is venturing into what is called “green hydrogen” — meaning fuel produced without emitting carbon, such as with electrolyzers. The bulk of industrial hydrogen produced in the United States is created through steam reforming, a process that extracts hydrogen from carbon-based substances, usually methane. Less than 1% of today’s manufactured hydrogen is “green,” according to the Goldman Sachs report.

Meanwhile, east of the Cascades, Washington’s biggest green hydrogen-related facility is being built just north of East Wenatchee. Right now, it consists of some concrete foundations and piles of pipes yet to be installed. Work is being done on a neighboring Douglas PUD substation to provide power to the plant. It is running roughly a year or so behind its original late 2021 operational date, a result of pandemic-related supply issues and the need to work out some engineering, said Gary Ivory, the PUD’s general manager. The idea for the plant came from how global warming has caused Cascade snowpacks to melt too early in the spring, sending more water barreling toward Wells Dam 50 miles upstream of East Wenatchee.

That means the dam and its sister dams on the Columbia River produce more electricity than the Northwest wholesale market can absorb, leaving Douglas County PUD to pay other utilities to accept the excess power. Instead, the PUD plans to send the excess power to electrolyzers at the plant, which will use Columbia River water to produce green hydrogen. 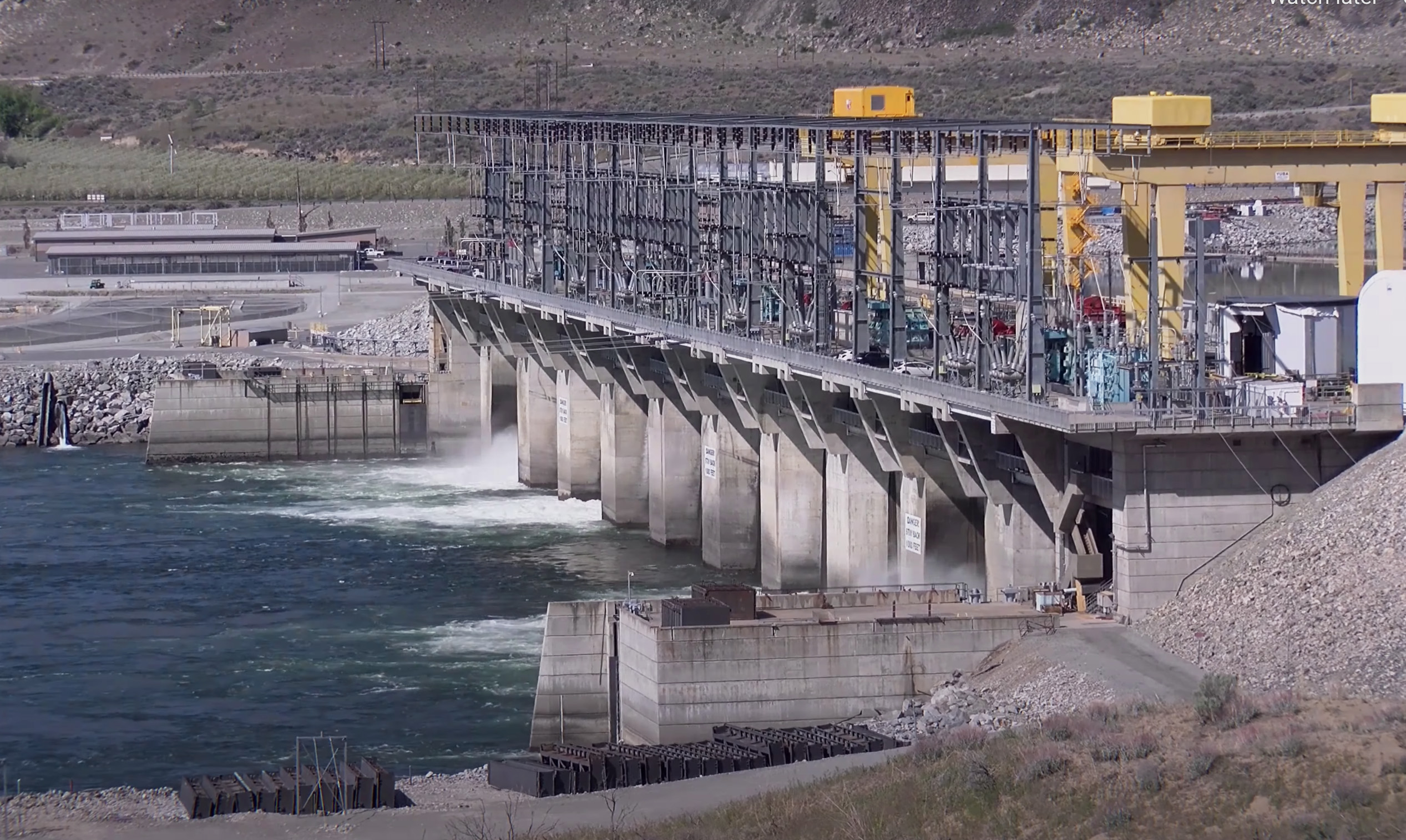 The Wells hydroelectric dam east of Wenatchee has been the primary power generating resource for Douglas County PUD. Excess power from the dam will eventually be sent to the new hydrogen plant to produce green hydrogen fuel. (screenshot courtesy of Douglas PUD)

The Wells hydroelectric dam east of Wenatchee has been the primary power generating resource for Douglas County PUD. Excess power from the dam will eventually be sent to the new hydrogen plant to produce green hydrogen fuel. (screenshot courtesy of Douglas PUD)

Ivory said the majority of potential future contracts for the PUD’s hydrogen fuel will likely include the steel and ammonia industries. The plant is currently designed to produce two tons of hydrogen a day. The PUD recently bought an extra 90 acres next to the plant’s 40-acre site to prepare for future expansion if needed. “We don’t have any contracts in place, but we have a lot of interest,” he said.

Some of the PUD’s hydrogen is intended for hydrogen-fueled vehicles, Ivory added.

Last year, Washington’s Legislature passed a bill to set up an eight-year pilot program in which the 6.8% sales tax on cars will be cut in half for the first 650 hydrogen fuel cell vehicles sold in the state. Current prices for the cars range from $34,000 to $58,000, according to manufacturers’ figures. After eight years, the exemption would be reevaluated. Sales tax reductions would apply only to new vehicles.

Meanwhile, the Port of Seattle is studying if and how it could do the same thing as the Douglas County PUD, since the port wants to trim its carbon footprint and be a player in the fledgling hydrogen supply economy, said Ryan Calkins, president of the port’s board of commissioners.

There is some urgency for the port to get into this field, as medium and heavy trucks, plus ships, are likely to switch to hydrogen fuels. “We really need to build this soon,” Calkins said.

For example, a handful of hydrogen-fueled ships, mostly ferries, are now in use in northern Europe and Japan. Calkins believes the shipping industry, which accounts for 3% of greenhouse gas, could gradually expand more into using hydrogen as a fuel, which would mean those vessels will use ports where hydrogen is stored.

The Port of Seattle and some partners are conducting two studies on whether it should get into this business and how, where to locate facilities, costs, potential customers and storage. The federal government has provided $2.12 million to the port for this research. The port is one year into a two-year study with partners Seattle City Light, the Pacific Northwest National Laboratory and the Sandia National Laboratory.

The second two-year study, by the port and Seattle City Light, is expected to begin soon. It will look at hydrogen storage issues and safety risks. The port does not have any master budgets, timetables or other plans mapped out for possible hydrogen facilities. “We don’t have a specific plan nor timeline. This is really just the first step,” said David Fujimoto, senior environmental program manager at the port.

Something to remember: Hydrogen can explode and it is highly flammable.

The poster boy for the dangers of hydrogen is the Hindenburg, the German zeppelin with a hydrogen cell that exploded in New Jersey in 1937, killing 36 people in a fiery crash.

At least 15 hydrogen explosions have occurred since 1999, including eight in the United States. The most recent American hydrogen explosions occurred in 2020 at fuel production plants in Texas and North Carolina, with the causes still under investigation. The latest fatal hydrogen accident in the United States took place with four workers killed in a Wisconsin industrial plant in 2019.

Safety issues at the Port of Seattle and East Wenatchee will be analyzed, officials at both projects agreed.

Ivory noted: “You’ve got to make sure the whole plant and the people in the plant are safe.” 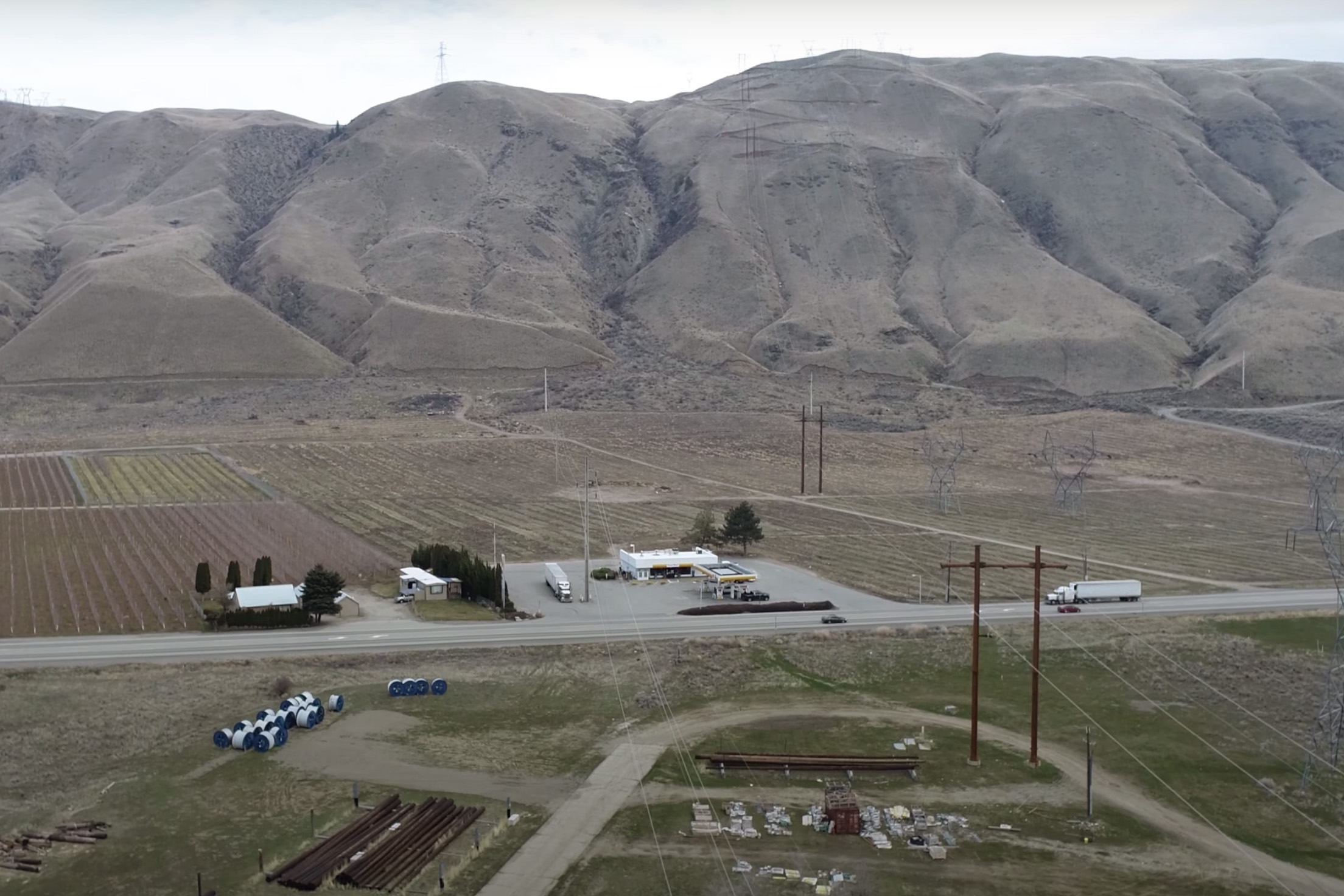 A 2021 image of the location of Douglas County’s new hydrogen plant near East Wenatchee. Washington state is hoping to get $1billion to $2 billion from the federal government to become a regional hubs for the production and distribution of hydrogen fuel. (screenshot courtesy of Douglas County PUD)

A 2021 image of the location of Douglas County’s new hydrogen plant near East Wenatchee. Washington state is hoping to get $1billion to $2 billion from the federal government to become a regional hubs for the production and distribution of hydrogen fuel. (screenshot courtesy of Douglas County PUD)