With virtual fencing, ranchers can herd cows from a computer

From their home in southern Okanogan County, Mike and Joy Wilson inspected the dozens of black cow icons across their computer screen.

It was a Thursday afternoon in July, and every several minutes they watched as the icons jumped a centimeter or two within bright yellow lines across a satellite map. Around the cows were water-tap icons and a scattering of long white lines indicating roads.

“We aren’t getting the messages we should be from that cow,” she said as she zoomed in on the animal known as cow 151.

She moved her cursor to the edit button, and after a few clicks had turned the cow yellow, meaning it was back in “transmitting” mode.

No, this isn’t some type of strangely specific video game. For more than two months, the map has provided the couple with nearly real-time accounts of the location of their 275 cows across thousands of acres about 40 miles from their home. The mapping software allows them to make major fencing changes to their pastures by simply adjusting yellow lines on their computer screen.

The project on the Okanogan County property is the first of a series of virtual fences set to be erected over the next year across 12 ranches in Washington. A conservation organization, ranchers, local officials and a California-based company are teaming up to add these innovative, environmentally friendly and essentially invisible devices where barbed or hot wire fences have traditionally been.

“The most wildlife-friendly fence you can have is no fence at all,” said Jay Kehne, of Conservation Northwest, a nonprofit environmental organization that has been leading the way on some of the state’s inaugural projects. “But that doesn't allow ranchers to properly graze. … Virtual fence gives the ability to have no fence and be able to manage your animals in a grazing rotation.” 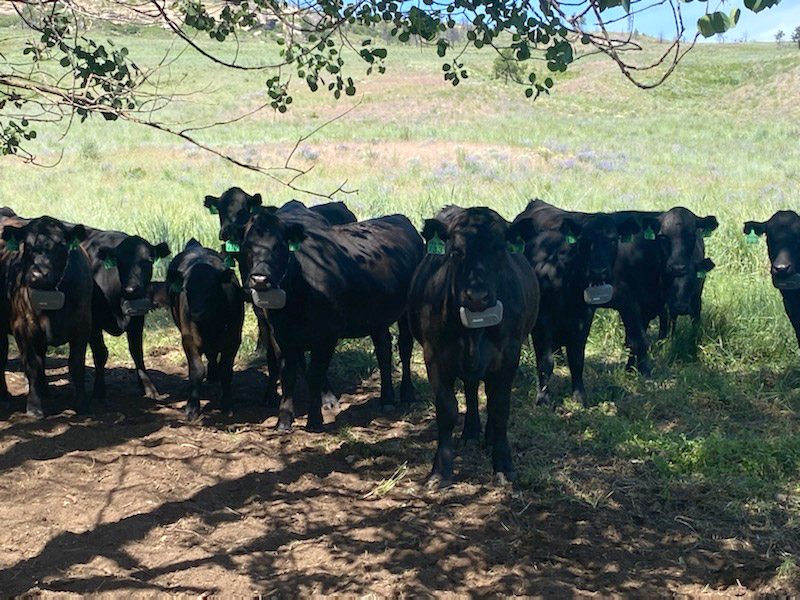 Joy and Mike Wilson’s cows wear special collars that track their location and allow the Wilson’s to keep them penned by “virtual fences” through sound alerts and low-voltage shocks, removing the need for physical fences. (Courtesy of the Wilson family)

Joy and Mike Wilson’s cows wear special collars that track their location and allow the Wilson’s to keep them penned by “virtual fences” through sound alerts and low-voltage shocks, removing the need for physical fences. (Courtesy of the Wilson family)

A company called Vence offers the only commercially available virtual fence product for livestock in the U.S., according to C.K. Wisniewski, the company’s rancher success manager. The product, which they launched last year, consists of 7-foot-high, often solar-powered towers, cattle collars and the map-based software Herd Manager.

Once a rancher draws a virtual fence using the software and assigns it to a herd, those assignments are transmitted to the towers, which then send that information to each collar, explained Wisniewski. Depending on the topography, each tower can read collars across 10,000 to 30,000 acres.

Based on how the rancher has set their system, the collar will beep when a member of the herd gets within a certain distance of the boundary, and then typically beep and emit a very short, low-voltage shock if the animal gets even closer. The shock, according to Wisniewski, is 400 volts less than a hot wire fence. Some ranchers, she added, don’t actually use that function at all.

“I've seen ranchers that only have sound zones, because the cows have been trained so well that they will respond to sound and never have to get a shock,” she said.

Kehne said the decision for Conservation Northwest to help fund the project in Okanogan County, and push for more virtual fences across the state, came after a series of large fires in Washington in 2020.

Kehne had spoken with some of the ranchers who had been through these fires. “They said they never really wanted to rebuild any more fences. They would much rather go with this new technology called virtual fence,” recalled Kehne. “That's the first time I heard the term virtual fence.”

After doing some research, he said he quickly realized that this new technology could be “game changing.” Fences could be less vulnerable to fires and more easily manipulated by ranchers, while also more wildlife friendly. 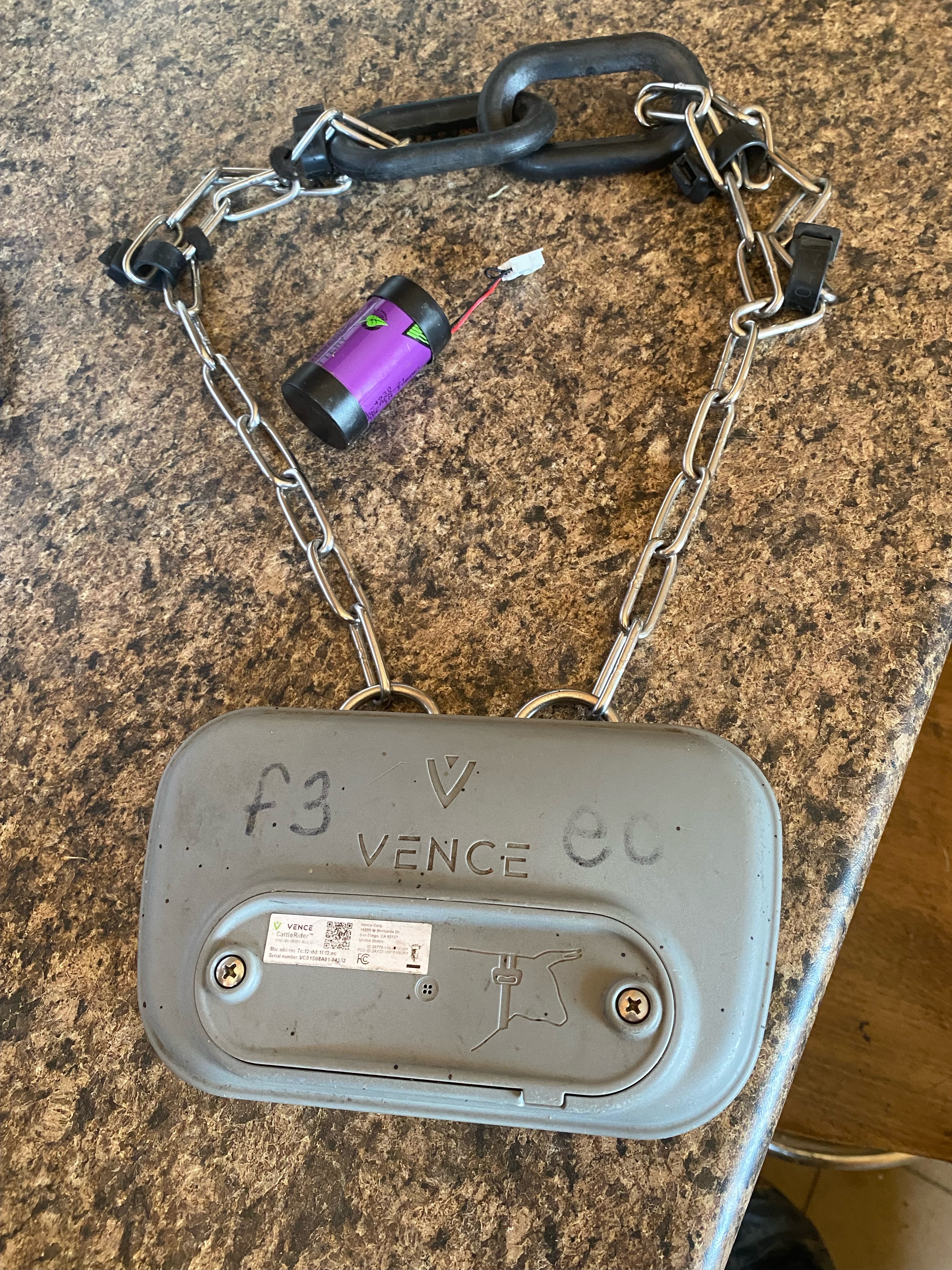 The cattle collars were made commercially available last year by a company called Vence. Once a rancher draws a virtual fence using the software and assigns it to a herd, those assignments are transmitted to the towers, which then send that information to each collar. (Courtesy of the Wilson family)

The cattle collars were made commercially available last year by a company called Vence. Once a rancher draws a virtual fence using the software and assigns it to a herd, those assignments are transmitted to the towers, which then send that information to each collar. (Courtesy of the Wilson family)

Barbed wire fences and electric fences have been around for decades, serving as perimeter barriers, as well as internal barricades. In the western U.S. alone, there are more than 1 million kilometers or about 62,000 miles of fences (not including urban and suburban property fences).

But these fences can ensnare and kill wildlife, as well as block them from migrating from their summer to winter range or through calving and fawning areas, explained Kehne.

“If we're not careful, we can start isolating populations of species,” he said. “And that's not good for genetics. And when you don't have good genetics, eventually species start to decline.”

Being able to adjust fences with a few clicks on a computer can also make it easier for ranchers to keep cattle out of more sensitive areas, such as streams and breeding grounds, said Kehne. They can also put inclusionary virtual fences around areas that need to be grazed more heavily because they’re infested with invasive species, such as cheatgrass, or to create a firebreak.

Installing a virtual fence on the southern Okanogan County property was especially significant.

The land was part of the traditional territory of the Okanagan Tribe and a section of the Colville Tribes’ original reservation (removed in the late 1800s following the discovery of gold). In October, with the help of Conservation Northwest, it was part of a piece of land returned to the Colville Tribes and today is leased by the Wilsons.

Lynx, wolverine, wolves and grizzly bears use this area as a passageway between the Cascade mountain range and the Rocky Mountains, making removing barriers especially vital.

Andy Joseph Jr., chair of the Colville Business Council, said another key reason Colville Tribes officials decided to approve the project was the additional protection it could give to creeks, rivers and fisheries.

“Having things like this protecting those drainages would allow better places for the fish to spawn,” he said. “Sometimes cattle feces chemically warm up the water hotter than it needs to and could contaminate the spawning ground. So I really believe it's important that we do things like this to protect the water as well.”

Vence’s collars are leased to ranchers for $35 per year, according to Wisniewski. Each tower costs a one-time fee of about $12,000. The Wilsons’ ranch includes about 8,000 acres covered by a virtual fence through two towers. Mike Wilson estimated that to fence just one of their 2,800-acre pastures using a physical fence would cost as much as $140,000. 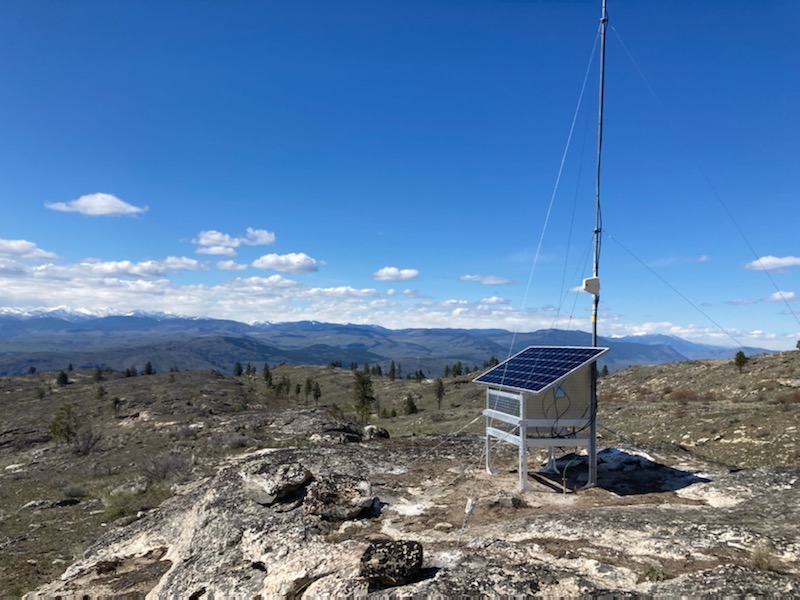 A solar powered tower transmits location data between the cattle collars and gps software Herd Manager. Depending on the topography, each tower can read collars across 10,000 to 30,000 acres. (Courtesy of the Wilson family)

A solar powered tower transmits location data between the cattle collars and gps software Herd Manager. Depending on the topography, each tower can read collars across 10,000 to 30,000 acres. (Courtesy of the Wilson family)

The virtual fence fees then give ranchers the capacity to put up basically an endless number of virtual fences across their thousands of acres.

But like a lot of emerging technology, it is certainly not immune to glitches, including software or hardware issues.

In May, after Joy and Mike Wilson put collars on their cattle and brought them to a 600-acre training pasture on the rocky property, they initially didn’t have a single cow escape their virtual fence.

But later, after putting one herd in a different pasture and preparing a nearby pasture and virtual fence that they would be moving them to in August, many managed to get to the new pasture weeks early by way of a small roadway.

Mike said they suspect the roadway, which is between a big bluff and a hill, doesn’t receive GPS signals.

And that cow whose icon Joy Wilson was able to turn yellow, she said she suspects it will turn red again.

“We’ve done that to her several times. ... There’s something wrong with her collar.”

However, overall the couple said they’ve been very happy with the virtual fence.

“It’s confusing and surprising because I don’t need to go and check [on the cattle] always,” said Mike.

Mike added: “I can have another cup of coffee because I don’t need to go anywhere.”

Correction: This story has been updated to reflect that the Wilson family collared 275 cows with location-tracking devices, not 135.