A federal judge ruled that the owner of the Buckhorn Mountain mine in Okanogan County is responsible for cleanup and could face over $100 million in fines. 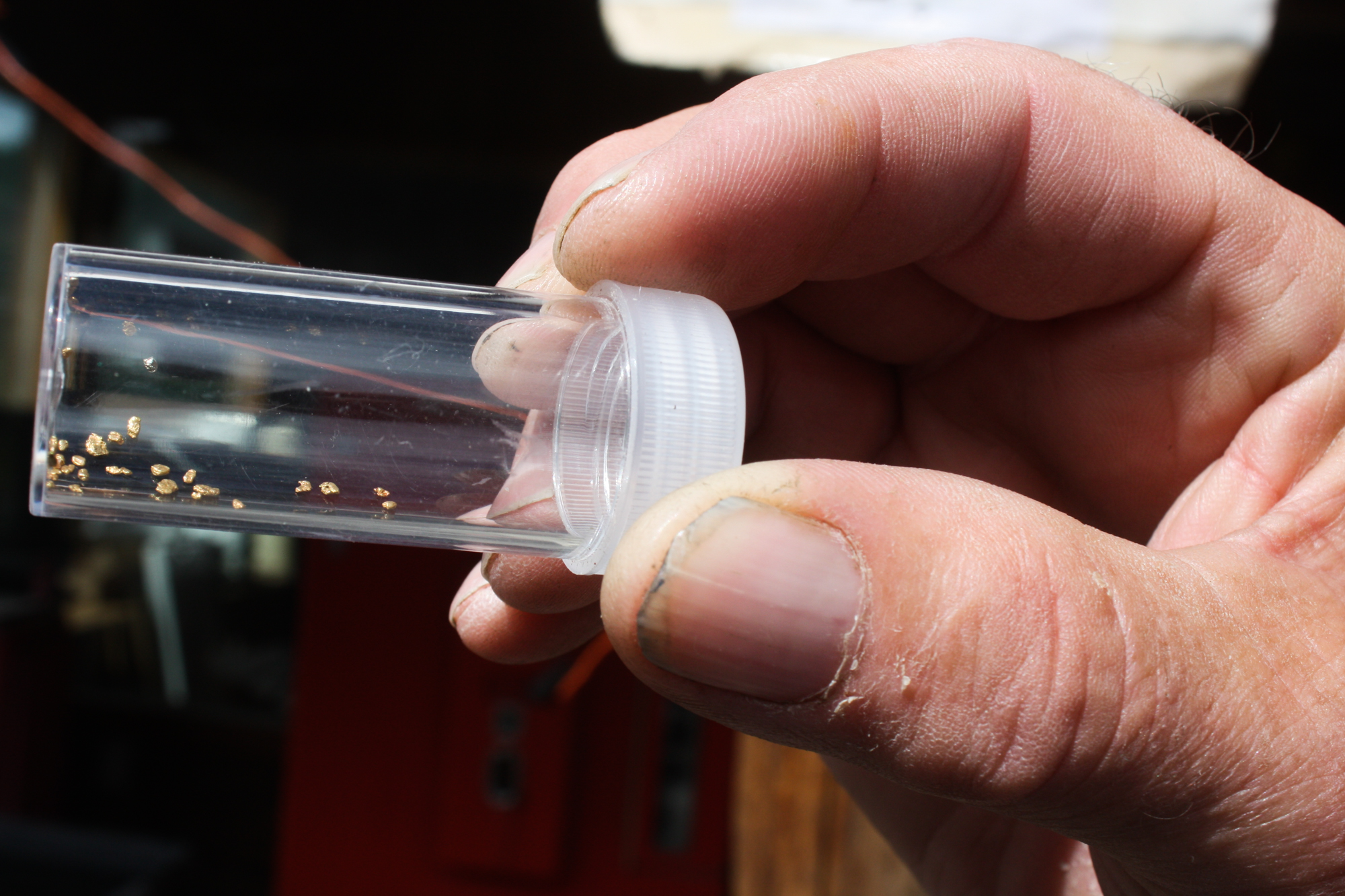 During Prosectors Days, a Ferry County resident shows what 7 grams of gold looks like. (John Stang for Crosscut)

A federal judge has ruled that Crown Resources, the owner and operator of the now-closed Buckhorn Mountain gold mine in north-central Washington, has committed 3,539 environmental violations. The company will likely be responsible for millions of dollars in fines, but continues to argue a broader case in court.

The Washington Attorney General’s Office and Crown Resources agreed to stipulate these violations occurred, and Eastern Washington U.S. District Court Judge Mary Dimke signed the stipulation order on Oct. 18. Crown Resources is now responsible for the environmental cleanup of the mine in Okanogan County.

Financial penalties will be resolved at a later date, according to a press release from the attorney general’s office. Legal action against the mine continues, with a similar lawsuit filed by a coalition of local environmental activists, the Okanogan HIghlands Alliance. Both the state and the alliance have said the company has been dragging its feet since 2015 in complying with state and federal water-pollution laws.

The maximum penalty is $54,800 per violation per day for up to five years — which could potentially reach a lot more than $100 million. Last week’s court order listed 3,539 violations. According to the state’s lawsuit, the daily reporting and violations have accumulated since March 5, 2015.

“Buckhorn Mountain is one of the unspoiled natural areas of our state. These companies had a responsibility, and legal obligation to protect it. They failed in that responsibility, thousands of times. We will continue our work to hold them accountable,” said Attorney General Bob Ferguson in the press release.

Buckhorn Mountain is in the northeast corner of Okanogan County, about three miles south of Canada. It’s a mountain and ravine area with a history of gold mining stretching back 125 years. In 1992, Crown Resources proposed digging a mine on Buckhorn Mountain, which soon led to the creation of the Okanogan Highlands Alliance. The group was concerned about the ecological effects of substances leaching from the mine into the ground and then into nearby creeks.

The alliance’s lawsuit names both Crown Resources and Kinross Gold U.S.A., Crown’s Denver-based parent company. Kinross is not named in the stipulation court order between the state and Crown Resources, and the Okanogan Highlands Alliance is not a participant in that agreement.

The alliance did not respond to a request for comment.

In a written statement, Crown Resources and Kinross spokeswoman Deana Zakar said: “This issue is about a fundamentally flawed permit. Crown Resources continues to maintain that the [permit being litigated] is unreasonable, based on faulty assumptions, and did not properly consider natural background levels. Many of the permit standards are simply unattainable. They are below natural background levels and the water discharged from the treatment facility is at or better than drinking water standards.”

Zakar continued: “Due to prior rulings by the court, which will be appealed, Crown Resources stipulated to these highly-technical permit violations to focus the lawsuit on the lack of identifiable damages from the permit exceedances, including to human health or aquatic life. It intends to vigorously defend this lawsuit as it progresses and stands firmly behind its protection of the environment and effective reclamation.”

The state and alliance lawsuits – both filed in 2020 – charge that Crown Resources and Kinross Gold did not comply with the federal Clean Water Act and the Washington Water Pollution Control Act, as required by its state’s pollution discharge permit.

Crown Resources’ Republic operation has tackled several environmental fixes at Buckhorn Mountain since 2014, including collecting underground water and sending it through an advanced reverse-osmosis water treatment plant on the site.

Kinross bought Crown Resources, including the Buckhorn project, in 1996. They mined Buckhorn Mountain from 2008 to 2017, extracting 34 tons of gold worth $1.3 billion. When Kinross and Crown Resources obtained their state water quality control permit, they became responsible for capturing and treating polluted stormwater, wastewater and groundwater from the mine’s operations. In an environmental review before the mine’s construction, the state identified potential pollution hazards.

Under state and federal law, Crown Resources must restore the mountain and the surrounding area to the water and soil quality levels recorded in the pre-construction review. The targeted substances include chloride, nitrates and nitrites, oil and grease, sulfate, total dissolved solids, total suspended solids, ammonia, arsenic, copper and iron, as well as water acidity.

The primary groundwater flow from Buckhorn Mountain is to the south and southeast. That water seeps into six small creeks nearby that flow east into two larger creeks that flow into the Kettle River, which heads east along the north side of Ferry County and into the Columbia River, roughly 70 miles from Buckhorn Mountain. This is bull-trout fishing country.

Scattered around the 50-acre site and just outside of it are roughly 50 state water-monitoring sites — a few on surface water, but most monitoring wells are 20 to 700 feet underground. In monthly reports, about 20% of these — primarily in the south and southeast — have shown pollutant limits above the state’s permitted levels. In November 2019, one groundwater monitoring well showed chloride levels eight times the state’s limits.

Crown also has an extensive network of monitoring wells around the area.

If the pollution continues at its present levels, fish will die because polluted water from the mine seeps into the neighboring creeks and streams that flow into the Kettle River, according to a 2021 Crosscut interview with the Attorney General’s Office.

With a few hundred residents, the Kettle River basin is sparsely settled. To the west is the unincorporated community of Chesaw, with only a handful of residents (down from its population of 200 in its Gold Rush heyday more than a century ago). Thirty miles farther west is Oroville, on the Okanogan River, with a population of roughly 1,700, the biggest town in the Buckhorn area.