by
Underscore.news and Indian Country Today
/ May 3, 2022 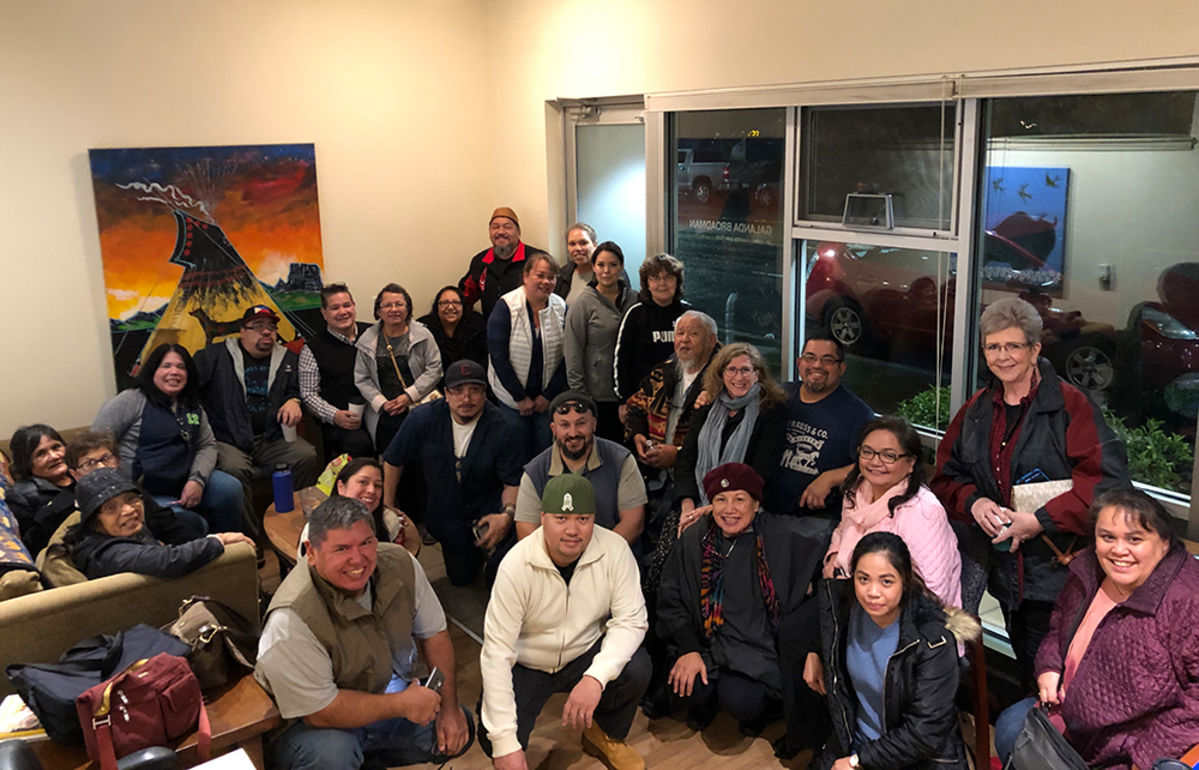 Members of the "Nooksack 306" gather at the law offices of Galanda Broadman. (Courtesy of Gabe Galanda)

After the U.S. government declined to intervene to stop evictions of potentially dozens of Indigenous people disenrolled from a Washington state tribe, seven of the disenrolled citizens have filed a lawsuit to stay in their homes.

The lawsuit, filed in state court in Olympia, is the latest — and potentially a last-ditch — effort to stop the planned evictions by the Nooksack Tribe, which disenrolled more than 306 tribal citizens in 2018 amid a political dispute.

In recent months, the tribe has moved to evict up to 63 people from federally subsidized tribal housing.

The lawsuit came after the U.S. government said it would not step in to stop the evictions, despite an unprecedented appeal in February from the United Nations for the federal government to intervene. The federal government legally cleared the tribe to proceed after its investigation found no tribal housing policy or due-process violations, but officials have also repeatedly pressed the tribe to abandon its eviction plans.

The Nooksack Tribe has been at the center of a yearslong debate over whether some tribal governments abuse their power in disenrolling tribal citizens.

The tribe, which contends those facing eviction are no longer citizens and are therefore ineligible for tribal services such as housing, said the lawsuit is another attempt to delay the evictions.

“Plaintiffs’ plan backfired when the [Department of the Interior] completed its investigation and issued its opinion finding that the Tribe … complied with all applicable laws in the Plaintiffs’ eviction process,” the tribe wrote in a court filing. “Dissatisfied with the results, Plaintiffs again seek state court relief to avoid eviction from Tribal housing.”

For Michelle Roberts, who is seeking through the lawsuit  to prevent the tribe from evicting her and 14 others from seven homes, the U.N.’s appeal was validation of what she and others have been saying for years: that she and others in the Nooksack 306 belong in the tribe and are now unfairly being kicked out of their homes.

Roberts had hoped that the attention resulting from the tribe’s eviction attempts would motivate the tribe to “have a heart and do the right thing” by allowing them to stay in their homes.

The United Nations’ appeal to the U.S. government highlighted concerns about those facing eviction being unable to find representation in tribal court, questions about whether the tribe was trying to take homes from people who rightfully owned them through the completion of rent-to-buy agreements and the effect that evictions would have on people who are Indigenous and still identify as Nooksack.

The eviction process was delayed for some families during the federal inquiries, but the tribe in recent weeks has moved to restart the process. Lawyers for those facing eviction say up to 19 households are at risk.

Last month, after unsuccessfully contesting the tribe’s eviction effort, a 49-year-old member of the Nooksack 306 moved out of a federally subsidized apartment she shared with her 21-year-old daughter and had lived in for nine years. In recent weeks, several other residents, including elders, some of whom have dementia, and Roberts, have had eviction hearings without legal representation.

Still, Gabe Galanda, the attorney who has represented many of the 306 people the tribe says no longer qualify for tribal citizenship, is hoping that the lawsuit, filed March 16 in Thurston County Superior Court. will keep some of those facing eviction in their homes.

On April 8, a Thurston County judge denied a motion to temporarily prohibit the tribes from moving ahead with the evictions, but indicated the case would play out in court.

In the lawsuit, seven families alleged that the tribe is illegally seeking to remove them from their homes, evem though the homes were built under a federal Low-Income Housing Tax Credit Program with the understanding that ownership would transfer to tenants after successfully completing a 15-year rental period. Some of the plaintiffs have been in their homes for more than 20 years.

The lawsuit named as defendants the Washington State Housing Finance Commission, which oversees the federal tax credit program the homes were built under, and a subsidiary of Raymond James, a large Florida-based investment banking firm that developed and, according to the complaint, owns 99.9% of the homes.

The lawsuit alleges that the Raymond James subsidiary is cheating taxpayers by minimizing its federal tax burden through the low-income tax-credit program, even though the Nooksack developments aren’t abiding by the original agreement. The litigation also alleges that the Washington housing commission has failed to ensure the tribe is in compliance with program requirements — which the agency has admitted is true — and neglected to move to halt the evictions despite the lack of compliance.

“Basically, what we’re witnessing is a bait and switch,” said Galanda, a citizen of the Round Valley Indian Tribes. He also argued that enrollment status would not be considered a valid “good cause” justification for evicting people from homes built with low-income tax credits.

But the tribe, which was not named in the lawsuit, filed a response  in court last week saying that the case should be dismissed because, among other reasons, state courts and the state have no jurisdiction in the matter.

The tribe owns less than 1% of the homes — which the tribe says sit on lands held in trust by the federal government for the tribe — developed under the low-income tax credit program, according to the lawsuit.

The tribe also said its rental agreements with the tenants who are suing to avoid eviction didn’t include any purchase option or conveyance promise after a specified period.

The tribe has also maintained that any interference by a governmental body would violate the tribe’s sovereignty and that it has the right to determine who qualifies for tribal citizenship. The tribe has further said it needs to evict those who it says aren’t citizens anymore — and aren’t eligible for tribal housing because of a 2019 policy change — to address a housing shortage for tribal citizens.

When the housing units were built, the intent was to sell them to tenants “in good standing” after 15 years, said Washington state Finance Commission spokeswoman Margret Graham. But a rent-to-own plan was never finalized, she said, meaning the tenants were only renters.

And because the tribe has justified the eviction plans based on enrollment status, the commission won’t interfere.

“Unfortunately, what is happening to these tenants is the result of the Nooksack Tribal Council’s decision to disenroll and evict them,” Graham said. “The tribal housing authority has the right to require that its residents be tribal members as part of its regulations, and like other federal and state agencies, WSHFC does not have the authority to either overrule that requirement or interfere with the disenrollment.”

Graham said the commission and tribe have been working to reestablish program compliance, and added that the tribe has indicated that it wants to sell the homes to “eligible” tenants someday. But the tenants who the tribe says are no longer tribal citizens “may no longer be eligible to buy the homes.”

As the tribe moved to resume its eviction processes, it also held an election in March, in which RoseMary LaClair defeated then-Chairman Roswell Cline Sr. Cline, who had held the post since 2018 and supported the eviction plans and disenrollment of the Nooksack 306. Lona Johnson, who also reportedly supported disenrolling the Nooksack 306, also lost her bid for council reelection.

While it isn’t clear if the leadership turnover will lead to a change in how the tribe views the attempted evictions and previous disenrollment controversy, Roberts, one of the lawsuit plaintiffs, said she hoped that the new leader would at least be willing to sit down with her and other Nooksack people who have been kicked out of the tribe.

All 306 former tribal citizens disenrolled in 2018, including the families facing eviction, are descended from the same Nooksack person. Amid a leadership struggle that boiled over in the early 2010s, the tribe said the family couldn’t sufficiently prove their Nooksack descent to make them eligible for enrollment.

Roberts, who was on the tribal council before she was removed from tribal enrollment rolls, disagreed. She said the family members have produced sufficient records to show they meet enrollment requirements, but that leaders have never sat down with the family to explain the reasoning for initiating the disenrollment and eviction processes.

A respectful face-to-face conversation, Roberts said, would help resolve questions about why the tribe has made its decisions over the years and why the documentation the family has produced in the enrollment question is insufficient.

“If we knew why and what their thinking is, it might be easier to accept,” she said. “But at this point, we don't know why they don't want to, other than they don't like our family; it's a family vendetta, or something. That's the only thing we can come up with.”

Roberts, who has lived in her home for 15 years, said she and other family members — aunts, uncles and cousins — chose to move near one another in the same development to support each other. That closeness has been especially helpful for supporting her elderly father, whom the tribe is also trying to evict and who has dementia, she said.

Now, many of them are faced with the prospect of being forced to move.

Roberts said that during a hearing last month, she was officially told she would be evicted. She said she plans to appeal that through a tribal administrative process, but that if she’s unsuccessful, she expects to have two weeks to vacate her home.

It’s been difficult to find suitable replacement housing, she said, especially because her husband is in a wheelchair. She’s also worried about trying to find housing for her father, who would benefit from remaining close to family members like his siblings, as he has for years, Roberts added.

“We’re not going to have that same kind of support being spread apart,” Roberts said. “This is why we all moved there, so that we could be together and help each other and grow old together, basically.”

Galanda is disappointed that more aggressive steps haven’t been taken to prevent the evictions, despite the Washington commission’s admission that the tribe was out of compliance with its requirements and the federal government’s criticism of the tribe’s eviction plans.

“The frustration, of course, is there's no domestic government entity that is brave enough to even consider those questions or take those positions — yet,” he said.

This story was originally co-published by Underscore.news and Indian Country Today on April 15, 2022.

Chris covers tribal affairs in the Pacific Northwest for Underscore.news and Indian Country Today. He is an enrolled member of the Red Lake Band of Chippewa Indians and descendant of the Leech Lake Band of Ojibwe.