A new look and feel for Civic Cocktail

For a decade, Seattle City Club's conversation series has tackled the region's biggest issues. A new partnership with Crosscut delivers a fresh take. 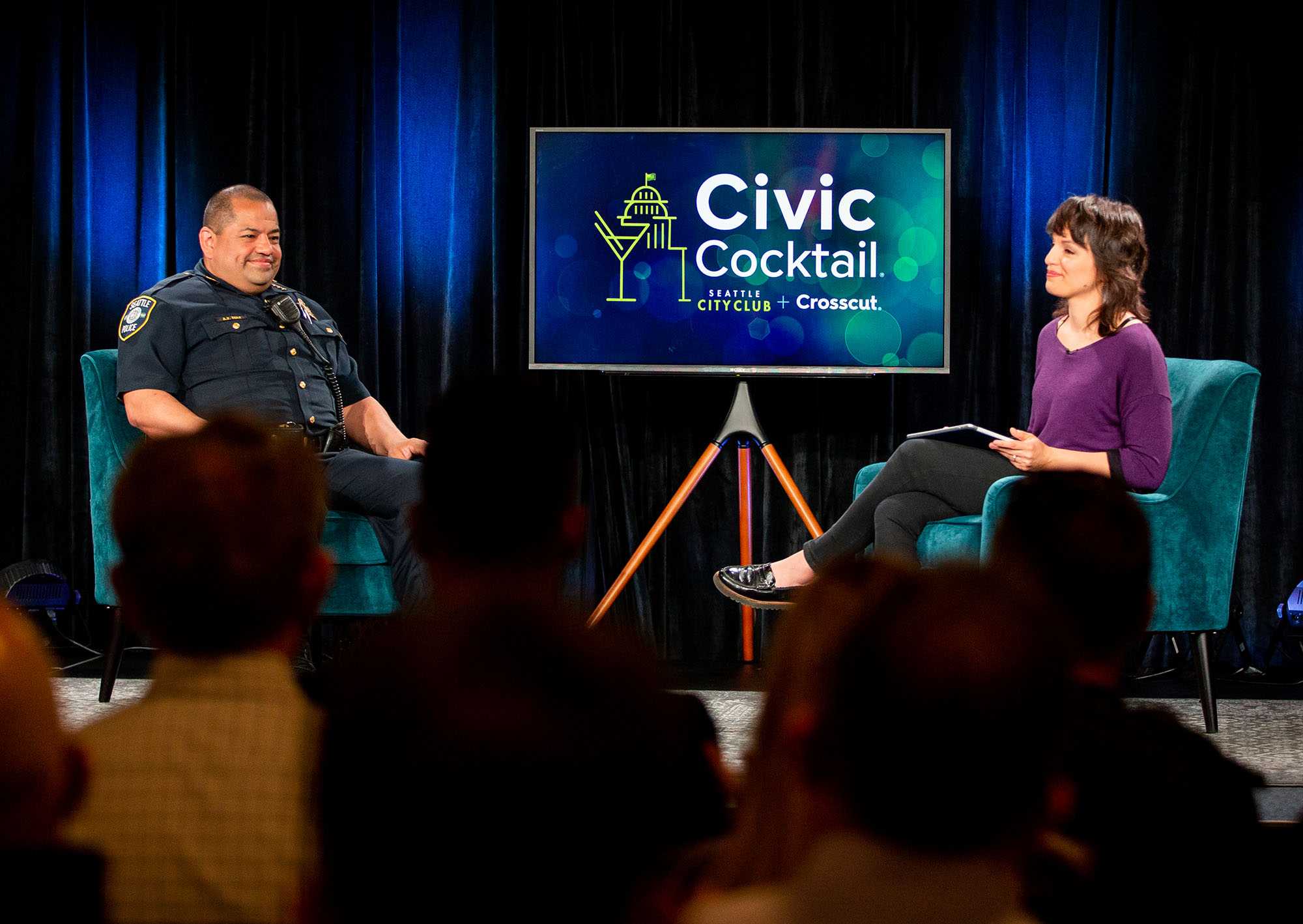 If you have been following Seattle city politics over the past decade — and if you are reading this, you probably have — then you likely know about Civic Cocktail. A cornerstone program of the nonprofit Seattle City Club, it has hosted crucial conversations about the most pressing issues facing the region, often with the people charged with addressing those issues.

I remember walking out of the Belltown rain and into recordings of the show, back when it was co-produced by Seattle Channel and filmed at the Palace Ballroom in front of a live, buzzing audience. Host Joni Balter, who you may know from The Seattle Times, KUOW's Week in Review or our own pages, was in command of the room, the cameras were rolling and the audience was locked into the conversation. And the guest was on the hot seat, answers and ideas being delivered to an audience in the room and at home.

To me, Civic Cocktail was the embodiment of true civic engagement: an audience that cared, a journalist well-prepared and an opportunity for accountability. And so I was excited when I learned that City Club was bringing the program over to Cascade Public Media, where Crosscut would play a role in programming and planning the monthly program and where it would be broadcast and streamed on KCTS 9.

Last month, the new Civic Cocktail made its debut and, in the update, we have changed a few things. The audience is still there — though now fully masked — and so is the buzz. But we have moved the show from the Palace Ballroom, which closed down during the pandemic, to Town Hall Seattle, a center of gravity for great conversations in the city. Then there is the host, journalist Mónica Guzmán, who is picking up where Balter left off while bringing a perspective shaped by her work exploring the divisions within our society (most recently for her book, I Never Thought of It That Way: How to Have Fearlessly Curious Conversations in Dangerously Divided Times).

I have had the great fortune to assist in the research and scripting of questions for the first two episodes of this new season, a pair of conversations about Seattle’s history and its future and another pair on public safety. And I have seen Mónica bring to her interviews a deep curiosity over those things that divide us and a determination to build understanding around divergent views.

In her approach, Mónica is both interviewer and audience. She must ask the hard questions — and she does — but she is also listening, deeply, right alongside all of us, seeking above all to understand. I was curious how, exactly, her work on her book has informed how she is approaching her Civic Cocktail work. So I asked her. She told me that she always tries to do two things in her interviews: Allow her guests to express the specific concerns they have about certain issues and then investigate the experiences that have led to their views.

"How did they come to believe what they believe?" she said.

It's simple enough. But in scripting an interview it can be so easy to make assumptions, to take shortcuts. And when you are fitting multiple interviews with multiple guests into an hour show — as we do on Civic Cocktail — it can be even more difficult to avoid.

So, what has Mónica learned in these first two episodes? I asked that too.

“I learned how difficult but how possible it is to layer different people’s views and positions into a wiser direction for the city,” said Mónica. “I saw this both in the story of Seattle’s past — all those struggles to see and serve everyone who's here — and in the conversation about public safety, something that is just not one thing and takes so many different shapes all across the city.”

This focus on understanding will make us a better city. I am thankful that we are able to host the conversations to make it possible.

RSVP now for the next Civic Cocktail, on Wed., June 22 at 6 p.m., where Mónica will be leading two conversations on the impacts that the end of Roe v. Wade would have on Washington state. And stream the first two episodes of this season of Civic Cocktail, or subscribe to the Civic Cocktail podcast to have new episodes delivered wherever you listen.