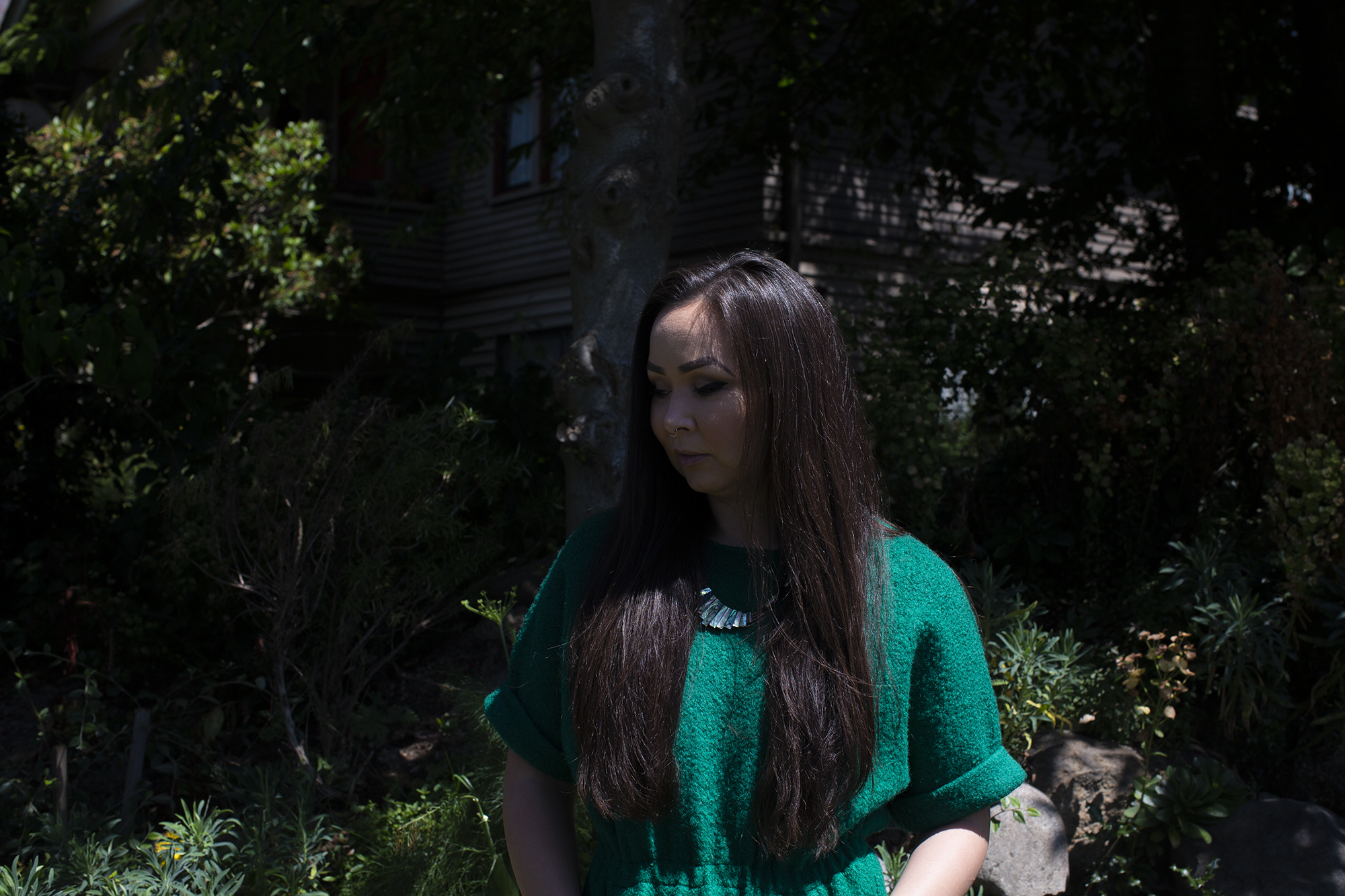 Phoenix Johnson, who is being evicted from her apartment, faces the difficulties of moving and apartment hunting during a pandemic. Her landlord issued the eviction with plans to occupy the apartment. (Shaminder Dulai/Crosscut)

For Phoenix Johnson, being poor means sometimes going a few weeks without money in her checking account. But as the coronavirus pandemic settled like a fog over King County and her already-modest income began to run dry, she was determined not to let it happen again. What if she became sick? How would she feed her daughter?

But between her efforts to stock up on food while paying her rent — already subsidized through housing vouchers for military veterans — she had little left over to build some small emergency savings.

So it was a “godsend” for Johnson, a single mother with a 12-year-old daughter, when the state earlier this year banned landlords from evicting their tenants, at least temporarily.

“Knowing that the moratorium was in place was a huge relief,” said Johnson, who still owes her landlord money. “At least that was a buffer.”

Yet while the moratorium has brought relief to Johnson and other renters in a time of great stress, it has also created a cliff whose edge is coming into view. Evictions may be paused, but rent payments are not, and any debts accrued will come due eventually.

In Seattle, a moratorium is set to last through December. Gov. Jay Inslee’s statewide moratorium, however, is scheduled to expire on Aug. 1.

While housing advocates, tenants and some legislators are hopeful the governor will extend the moratorium further, a number of landlord and property management groups, including the Washington Landlord Association, are raising money and recruiting plaintiffs for a possible court challenge to the governor’s moratorium and attendant freeze on rent increases, according to a meeting agenda posted online and notes from the meeting obtained by Crosscut. The lawsuit would mirror a similar challenge in three California cities.

“They’re not really given any other options,” Chester Baldwin, a lobbyist who represents landlords and who confirmed litigation is in the works, said of those organizing the suit.

Yet, without enough rental assistance or policies to keep renters housed, many fear that lifting the moratorium would lead to an unprecedented spike in evictions and a subsequent increase in homelessness. As with the expanded unemployment benefits and loans to businesses devised in response to the coronavirus pandemic, the eviction moratorium is a dam holding back the worst effects of a financial crisis on par with the Great Depression.

If that dam breaks and people lose their homes, a homelessness system that has seen its capacity diminish during the COVID-19 pandemic could be even more overwhelmed.

“It’s super concerning,” said state Rep. Nicole Macri, D-Seattle. “I think it’s imperative that an eviction moratorium stay in place until we can make statutory changes that protect people from eviction due to the economic crisis related to COVID.”

What comes next is unclear. There are traces of sympathy between landlords and tenants. Some renter advocates acknowledge it’s a hard time for some landlords, while landlord groups acknowledge that many tenants can’t pay their rent.

Mike Faulk, spokesperson for Inslee, said in an email: “The governor’s office is working with landlords, tenants and legislators in finding the right balance for a path forward.”

But with time running short and no silver bullet in hand, tensions are rising.

Michele Thomas, director of policy and advocacy with the Washington Low Income Housing Alliance, called a possible lawsuit to end the moratorium “disgusting.”

“They want to preserve their right to evict people and kick them to the curb,” she said.

Meanwhile, Baldwin, the lobbyist, said the burden should not be the landlords’ to bear. “It’s the government’s job to step in for their citizens and come in with rental assistance,” he said. “It’s not the job of the housing provider to be the bank. They’re not situated to do that, and they have no ability to do it.”

In the meantime, renters like Johnson look to an uncertain future, more anxious than ever.

Who will be hit hardest

The fear of an eviction surge comes at a time when societal racism is under a microscope. And the impending wave is almost certain to crash hardest on communities of color — Black communities, in particular. Homelessness and eviction have never been colorblind, and the blast radius of the COVID-19 pandemic is no exception.

According to the U.S. Census Bureau’s most recent weekly Housing Pulse Survey, 12% of Washington renters — nearly 250,000 households — reported they were unable to make rent in June.

But for Black renters, that number was an astounding 42%, compared with 8% of white renters. Twenty-four percent of Hispanic/Latino renters and 8% of Asian renters were unable to make rent.

The outlook for the future is just as bleak. Thirty percent of all renters surveyed in Washington state said they had only slight to no confidence they would make July rent, according to the most recent report. That number reached 40% for Black renters.

“We have massive racial disparities in access to housing and the experience of homelessness pre-COVID,” said Thomas of the Washington Low Income Housing Alliance. “These data points show us that if evictions are allowed to begin again, we will double down on our racist reality where people of color all across the state are going to be evicted and face homelessness.”

The census data also suggests that, in addition to the growing debt to their landlords, renters are increasingly indebted to their banks. In one June survey, 437,000 Washington residents reported using credit cards or short-term loans to pay their rent — more, even, than the 316,000 who reported using unemployment insurance.

Considering that interest rates for loans and credit can be as high as 15%, “this leads to the strong likelihood that there will be a credit card debt crisis piled on to the rental debt that is already accumulating for low income renters,” said a brief prepared by the Washington Low Income Housing Alliance.

Johnson, who is Native and whose daughter is part-Black, is college-educated and served for four years in the Air Force. She has struggled with anxiety and PTSD, but felt she was finally creating a reputation for herself in her blossoming career as a speaker and educator on equity issues.

But her progress seeing the work grow was all but wiped out with COVID’s arrival. She’s scared, mostly for her daughter and the trauma that comes with upheaval.

Johnson’s family lives in Ballard now, in an area where they can walk to their favorite shops and admire their neighbors’ flowers, a long way from when they were couch surfing with friends. “It just seems so unjust that I might have to lose all of that,” she said.

When Samie Iverson thinks about what comes after the eviction moratorium, “It makes me feel nervous and a little bit nauseous,” she said.

A stronger safety net has held off some of the worst economic effects of the pandemic. But Iverson, senior manager of education strategies with Building Changes, an organization fighting youth homelessness, worries about what happens as those nets are rolled back. It’s a sentiment shared near unanimously by those who have been working on poverty issues in King County and around the state.

“It’s this very interconnected ripple effect that, when I think about it in context of how are we going to come out of this on the side or what’s this going to feel like or look like, I have a lot of concern and I have a lot of fear,” she said.

Nina Martinez, board chair of Latino Civic Alliance, sees the double impact of COVID on the Hispanic/Latino community, which in Washington is getting slammed by COVID-19 at disproportionate rates, while also facing a looming eviction crisis. The people with whom her organization works are more likely to hold low-paying jobs that cannot be done from home. For Martinez, it’s particularly unjust that these “essential” workers are not getting the support they need.

“We already have a homeless and housing issue,” she said. “It’s going to make it worse, and it’s going to devastate family infrastructures. You’ve got children living in these homes.”

Help for renters goes beyond the eviction moratorium. Washington state has earmarked $100 million from the Coronavirus Aid, Relief and Economic Security Act, or CARES, to assist tenants with rent. A smattering of programs and funds aims to prevent evictions at a local level — the United Way, King County and Seattle have all either set aside money or passed legislation aimed at preventing evictions.

Landlords, meanwhile, can dip into a mitigation fund set up by past eviction-reform efforts, said Faulk, the governor’s spokesperson. He added that discussions about the moratorium's future are ongoing, “and much is also in the works to address the needs of tenants and landlords.”

But Thomas of the Washington Low Income Housing Alliance said what’s been offered is not enough. She estimates that it would have taken up to $165 million to close the rent gap for June alone. “How are we going to use $100 million to prevent a massive wave of homelessness?” she said.

Macri, the state representative, said that if the Legislature is called back into an early session, she intends to focus on eviction prevention. “But if we don’t return until the regular session in January, I think it’s really important that the governor extend the moratorium,” she said.

Republican state Rep. Andrew Barkis, who also owns Hometown Property Management in Olympia, said the moratorium set up the approaching evictions cliff without a proper exit strategy. There was early agreement on the moratorium, but that’s fallen apart, he said, since it’s been extended twice.

“The governor has not done himself any favors by putting himself in this position,” he said. “Because when you stop something temporarily, you have to start it again.”

“I’ve talked to many property owners who are just hanging on by a thread and are burning through money,” he added.

Even in the short term, the moratorium is porous. Landlords can still refuse to extend a lease and can evict tenants if they deem a home necessary for their own use or want to sell the property.

Johnson said her landlord has hassled her since the beginning of the eviction ban, demanding she explain her hardships and coming after her for what she views as minor issues, like her storing a table in the basement. “There was an uptick in how uncomfortable they were making it for me,” she said.

And then last month, she was handed a letter saying the landlord was going to occupy her apartment and would not renew her lease. She has 60 more days and then must find somewhere new to live. Now she faces the prospect of house hunting in the middle of a pandemic.

She felt some “morbid” hope that the economy had weakened enough that housing might be cheaper, but that has not borne out. Once again facing a future without stable housing, she fights back tears.