In interviews, the man’s closest friends say he was beloved and question whether he needed to die. 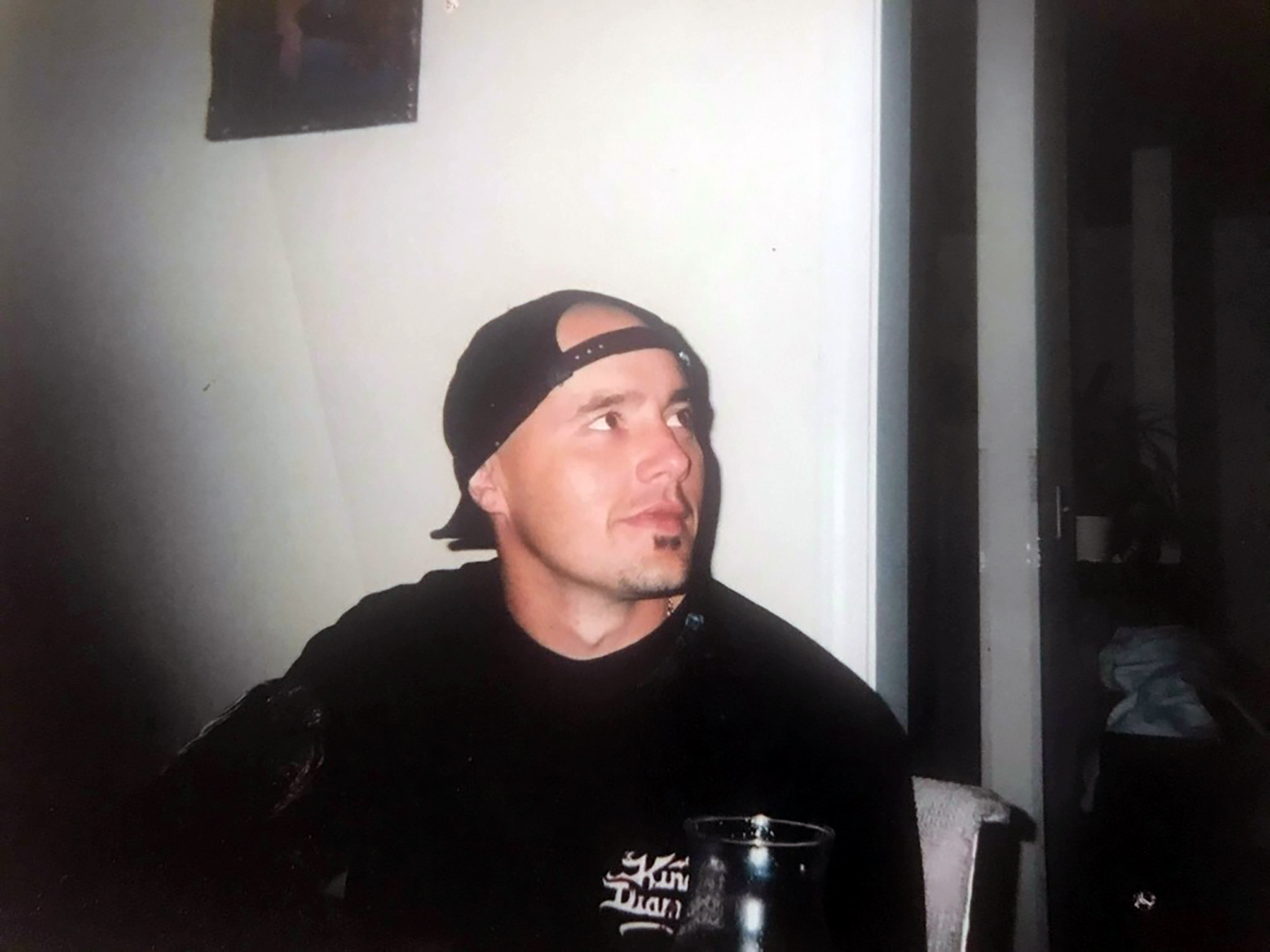 A few months before Derek Hayden was shot and killed by Seattle police, he called Timothy Wheeler out of the blue. Although the two were nearly 40 years apart in age, they had become good friends while Hayden was staying in an RV on Wheeler’s property in Sequim. They would spend long afternoons there talking, often about Hayden’s libertarian-leaning views on politics.

Hayden, 44, had recently moved away from the peninsula to Seattle and the two hadn’t spoken for some time when Wheeler received the call. But that’s who Hayden was: You might not see him for years, but then one day he’d call you up or stop by the house, and it was like no time had passed at all.

“He was so upbeat and cheerful and seemed to be happy,” Wheeler, 81, said of their conversation last summer. Hayden had found work and was enrolled in Seattle University’s College of Science and Engineering. He lived in a nice apartment that was affordable enough. He volunteered at a food bank. “I told him, ‘Derek, I’m so delighted to hear that about you,’ ” Wheeler said.

And then Wheeler learned of Hayden’s death on Feb. 16. That he was apparently acting suicidal after sounding so positive months earlier was a shock. But, more than that, the fact his crisis ended in his violent death has left his friends and family confused and angry.

“It’s not acceptable what happened,” said Alan Burns, Wheeler's nephew and one of Hayden’s best friends dating back to middle school. “They just straight up murdered him. He was only trying to hurt himself. They didn’t need to do that.”

Hayden was first spotted near the downtown waterfront by Port of Seattle police in the evening of Feb. 16. He was holding a knife and officers believed he was suicidal. Port officers fired foam-tipped projectiles at Hayden in an unsuccessful effort to subdue him.

The Port officers then contacted the Seattle Police Department. When SPD officers arrived, they quickly drew their firearms, video released by the department shows. One officer with a long gun exited his car — leaving no barrier between himself and Hayden — and told Hayden to stop.

Hayden walked toward the officer with the knife, saying “Do it, do it, please kill me.” Officers Cassidy Butler and Willard Jared fired, killing him. Both have been placed on paid administrative leave and the shooting is being investigated by the police department's Office of Police Accountability and Force Investigation Team. The Seattle Police Department refused to comment on the shooting or their investigation.

The shooting comes at a time of reckoning over how police in Seattle and around the country respond to unstable situations. At the center of that debate is when and whether police should respond to people in crisis. Advocates and elected officials have increasingly looked to programs like those in Denver or Eugene, Oregon, that rely more heavily on behavioral health specialists than on armed officers. 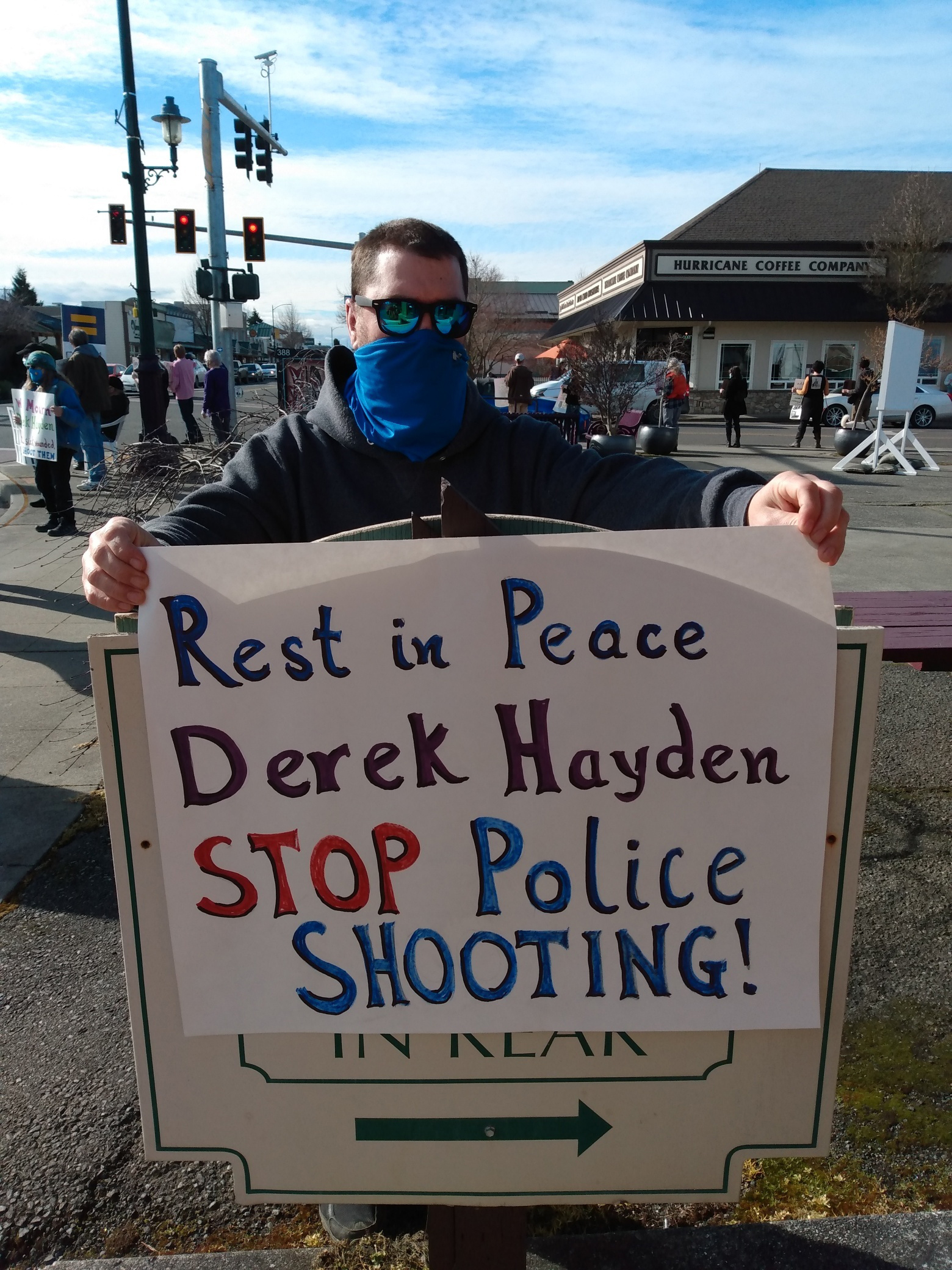 Brian Burns holds a sign in memory of his friend Derek Hayden at a Black Lives Matter demonstration in Sequim. (Alan Burns)

Brian Burns holds a sign in memory of his friend Derek Hayden at a Black Lives Matter demonstration in Sequim. (Alan Burns)

Hayden’s death also strikes at the heart of another point of anguish — the perceived mismatch of officers shooting people carrying knives. Between 2005 and 2018, about 20% of people shot by Seattle police had a knife or another sharp object, according to publicly available department data, with at least two more occurring since, including Hayden.

Charleena Lyles, Terry Caver and now Derek Hayden — each in crisis, each carrying a knife — were killed by Seattle police.

Derek Hayden’s nicknames — Deathmetal Derek, Iron Hayden — weren’t just given to him. “He earned it,” said Anthony Perez, who was a teenager when he first met Hayden.

In the summer, Hayden would toss himself into the Dungeness River from the top bar of a trestle bridge in Sequim. On his skateboard, he’d take 10-, 12-foot drops down ramps. He’d set up obstacle courses in his yard — a ninja circuit long before it was a popular television show. Hayden’s style was big, but also deeply creative, trying new things, coming up with ways to express himself on his skateboard.

“He was inspirational,” said Huntz Hager, a longtime friend. “He brought a new perspective on skateboarding, on music, on life, on training to accomplish goals.” 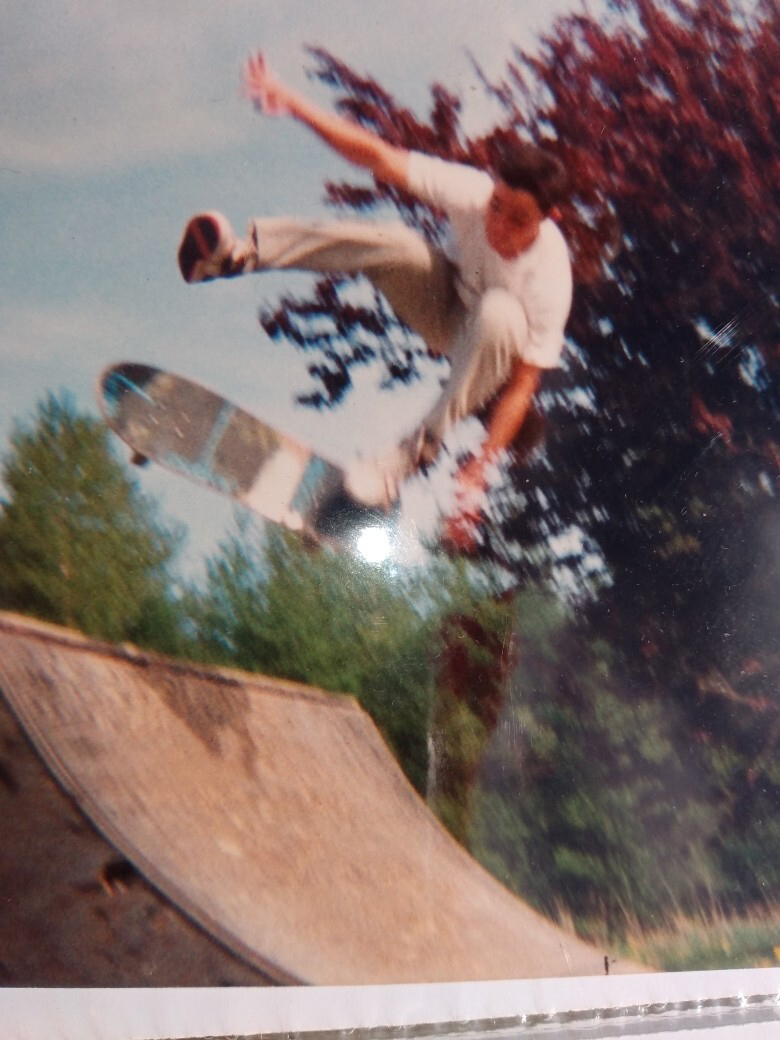 For Perez, Hayden was a rock, someone he could turn to at times when he struggled, confident Derek would be there. Despite the heavy-metal nicknames, Hayden was the sort of guy who would give you his last shirt if you needed it.

“I was kind of an emotional wreck and he was just a good friend,” said Perez. “He was one of the good ones.”

Both of Hayden’s parents have died — his mother when he was young, his father recently. He moved from California to Sequim when he was in his early teens to live with his aunt and uncle. His cousin, Jason Trammel, was in second grade when Hayden moved in and saw him more as an older brother, emulating him, amazed at how quickly he could master things.

“I would always try to do whatever he was doing,” said Trammel. “I was always trying to be him.”

After high school, Hayden moved around a lot, mostly between Oregon and Washington — attending college in Portland and Ashland, Oregon. He would disappear for a while, but then would show up again one day. And when he did, it would always be the same Derek.

Beyond Hayden’s go-hard attitude, friends often noted how intellectual he was.

“He was hyperintelligent,” said David Woodruff, who first met Hayden in the mid-1990s. “He was always the smartest dude in the room.”

That intelligence drew him to computers. What started as a love of early video games — Nintendo, Sega — morphed into genuine skill. His cousin, Trammel, pushed him to pursue that passion further. He suggested Seattle University and Hayden enrolled in the school’s College of Science and Engineering. The president of the college, Stephen Sundborg, acknowledged Hayden’s death in a message to students and staff, calling for more mental health resources and a “more serious consideration of changes in responding to such situations to prevent them from happening in the future.” 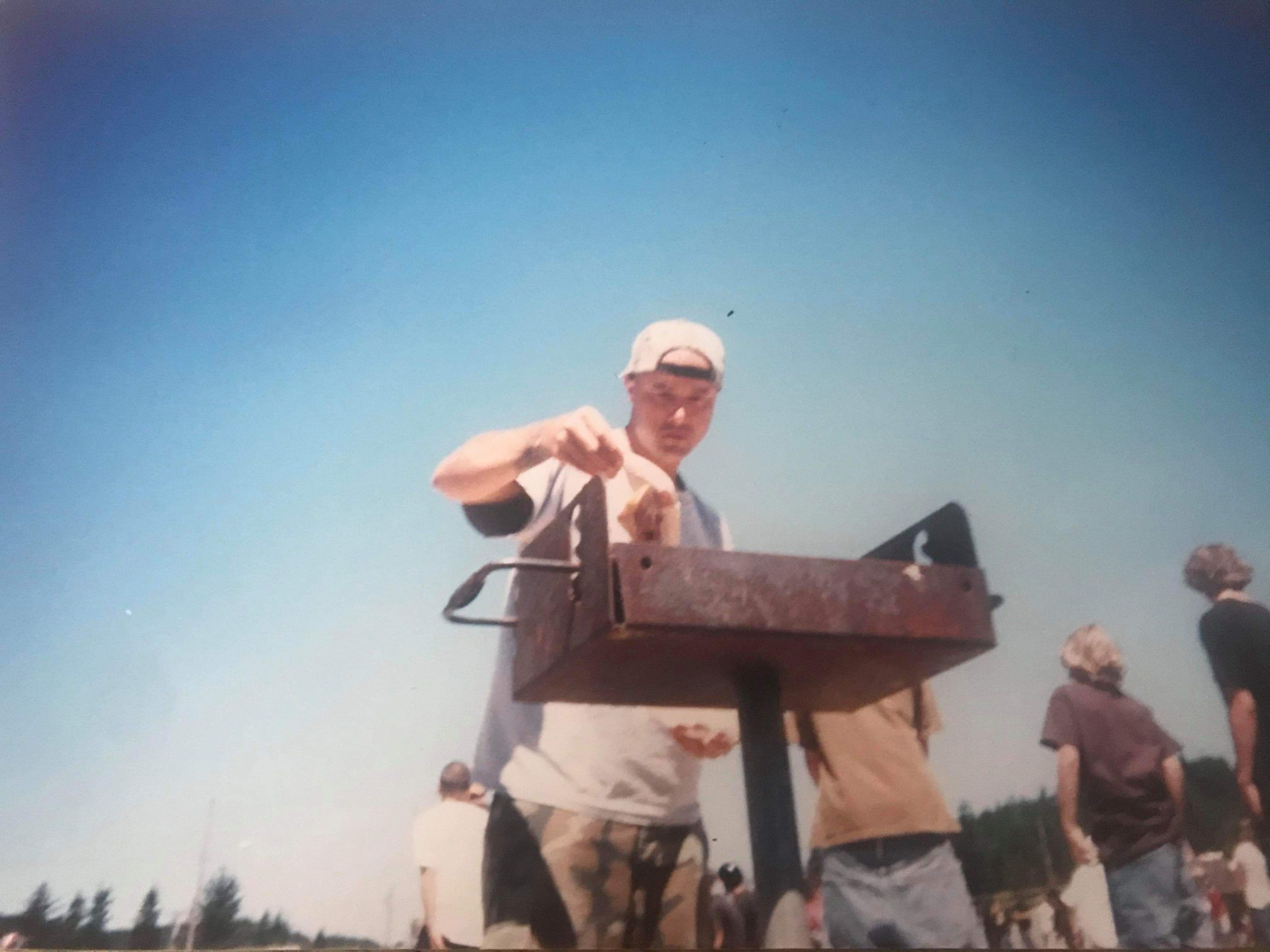 Friends say they rarely saw clear signs of mental illness. Hayden never spoke openly about it if he was struggling. There were sometimes flashes of something complicated below the surface; he was never violent, but sometimes he’d get angry or there would be signs that he was caught up in his own head. You could see something in his eyes, said Perez, and it made you wonder what was happening behind them.

“I think there was stuff that he probably wanted to work through and maybe hadn’t,” said Perez. “It wasn’t something that was in your face, necessarily.”

Meghan “Migzy” McGuire, a friend of Hayden’s when he lived in Portland, said he could sometimes become self-destructive. McGuire, who described Hayden as “one of the most kind and gentle souls” she had known, said she’d have to sometimes talk him down, but that his episodes were usually brief.

“I don’t think he’d ever been diagnosed or treated for mental health,” she said. “But when he’d have these types of incidents happen, he’d recover really fast.”

It seemed like Hayden was doing well recently. Just days before his death, Hager missed a call from Hayden, who left a voicemail. There was nothing concerning in the message, and Hager remembered feeling proud that his friend seemed to be on a path that suited him well. In retrospect, Hager wondered if maybe the stress of school was weighing on him. Wheeler, his older friend, wondered if it was related to the pandemic and feeling isolated. But these were mostly guesses.

“No one realized he was in this sort of pain,” said Trammel.

Whatever the reason, what seemed clear to his friends is that, by making a scene in public, Hayden was reaching out in the only way he knew how.

“He was basically asking for help is what I see,” said Perez. “He didn’t hide and do it. He was out in the open. And the police came and murdered him. Unacceptable — that’s all I keep thinking.”

Most of his friends learned of Hayden’s death a week after it happened — the same time as the public, when the medical examiner released his name. Reaction in the community has been equal parts disbelief, sadness and anger.

Hager said he resisted watching the police body camera video at first. But felt he needed to find some closure. After he did, he couldn’t get over how quickly it all happened.

“For them to show up and shoot him dead in less than 10 seconds, I’m at a loss,” said Hager.

It’s a theme echoed by all of Hayden’s friends and family: Did he really need to die? Some of those closest to him blame the officers; others are less critical of the individuals and more of a system that defaults to police response and live bullets. But where they’re unanimous is the conviction that there had to be a path that didn’t end in death for Deathmetal Derek.

“He had a weapon with him, but he would never hurt anyone,” said McGuire. She’s confident that, had someone been there to talk to him calmly, he would have listened and de-escalated, as he’d done before.

Trammel is exploring those questions with attorneys, considering whether it’s worth filing a wrongful death lawsuit. If possible, he said he wants to hold someone accountable for what happened and draw attention to how officers respond to people in crisis.

For Perez, his childhood friend, Hayden’s death has kicked up a lot of old emotions. It’s caused him to reflect on their lives together when they were younger and the community of people that knew and loved Derek. Beyond the headlines of another police shooting, Perez just wants people to know: “He was somebody’s somebody.”

Correction, March 3: A previous version of this article incorrectly said the names of the officers who killed Derek Hayden had not been released.