Providers say the county is not ready for Washington state's eviction moratorium to end. 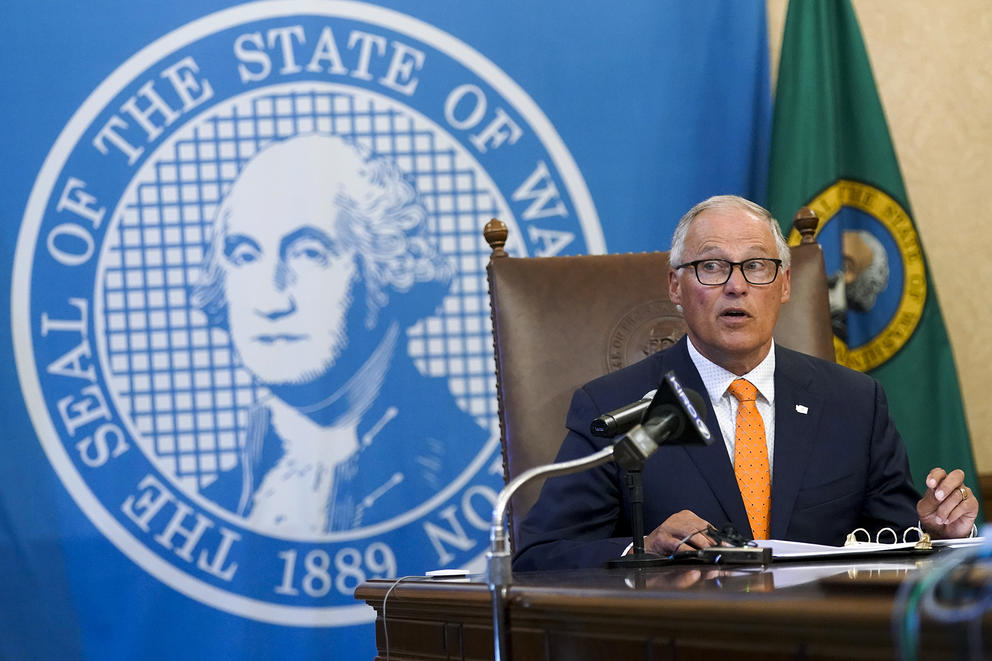 Washington Gov. Jay Inslee at a June 3, 2021, news conference in Olympia, where he announced that Washington would be the latest state to offer prizes to encourage people to get vaccinated against COVID-19. (Ted S. Warren/AP)

Antonio Salazar is behind on his rent and still doesn’t know what comes next. Weeks have passed since he cast his name into King County’s lottery system, seeking help to cover what he owes, but he hasn’t heard much since. For now, he is saddled with thousands in debt. And with the state’s moratorium on evictions scheduled to end in two weeks, Salazar is left in the dark, wondering whether he could be living on the streets at the end of the month.

At a time of continued peril for renters in Washington, as well as the landlords relying on monthly rent payments, federal, state and local governments coalesced around the idea that the best relief should come in the form of direct payments. Hundreds of millions of dollars in assistance followed.

But rolling out that relief has proved an enormous logistical challenge. The result is that, with just two weeks until Washington’s eviction moratorium is scheduled to end, many renters and advocates fear some qualified tenants could be booted from their homes, even as their applications for assistance sit waiting for review.

“We're gonna see people get evicted, despite the fact that we have tons of money to simply bail out landlords,” said Edmund Witter, an attorney with the King County Bar Association’s Housing Justice Project.

Take King County. When the first $60 million in rental assistance began to flow late last year and early this year, county workers were left to track tenant applications through makeshift spreadsheets and Google Docs — a fraught system for rolling out millions in new spending. With $145 million more in assistance due to arrive from the federal government, the county concluded it needed to hire someone to build a database to streamline that work.

But that database is only now beginning to come online, weeks later than county officials had hoped and just days before evictions are set to resume. The county began training partner agencies on its use this week. While the number of landlords and tenants seeking assistance grows, the county has not processed most of their applications.

Mark Ellerbrook, division director of housing and community development in the King County Department of Community and Human Services, said the database will eventually mean faster processing and payment, while ensuring that the county follows all the requirements the federal government set out.

But the result of its delayed rollout is that county workers have only just begun to sift through applications. While the county is still spending some federal Coronavirus Aid, Relief and Employment Security Act money — approved by Congress last summer — it has so far not allocated any of the $145 million it received from the second package passed by Congress in December, said Ellerbrook. Those dollars likely won’t begin to go to renters and landlords until mid-July — weeks after the eviction moratorium expires on June 30.

“When you develop a system that takes typically six to nine months and you develop it in six to nine weeks, there’s a lot of work that needs to be done,” said Ellerbrook. “We’re trying to balance the urgency with the accountability.”

The county has not yet received its allotment of assistance dollars from the third federal stimulus package, the $1.9 trillion American Rescue Plan Act.

Those who work directly with tenants have witnessed the challenges firsthand and argue it’s evidence of the need to extend the statewide eviction moratorium further.

“I mean, people are gonna get evicted, despite the fact that they put in an application, they put their name in the lottery,” said the King County Bar Association’s Witter. “It just hasn't been pulled, or they haven't been screened, or they were screened and the case manager went out of town and didn't tell anyone and now their application's sitting God knows where and nobody can access it.”

“The spigot hasn't turned on yet,” said Lauren McGowan, a senior director with the United Way of King County. “And so the reality is that we do need the governor to extend the moratorium, because it would be a shame to have all this money about to go out into communities and then to have the eviction moratorium be lifted.”

King County is not alone. Counties across the state have spent only a fraction of the total rental assistance that has or will eventually become available. At the end of May, the Washington Department of Commerce reported being billed for just $3.5 million of the $322 million in rental assistance — or just over 1% — available from last December’s $900 billion Coronavirus Response and Relief Supplemental Appropriations Act. Roughly $40 million of CARES Act funding, passed by Congress last summer, has still gone unspent. Meanwhile, none of the more than $650 million in rental assistance from the American Rescue Plan Act has yet to be made available to renters.

The slow spending is not evidence of a lack of need. In the most recent survey from the U.S. census, more than 70,000 tenants in Washington state reported occupying their current space without paying rent. Ellerbrook estimated that in King County alone, 60,000 households may be in need of assistance. So far, about 2,600 landlords and 9,000 individual tenants have registered for assistance with the county and are waiting for approval, he said.

Anecdotally, Witter and United Way’s McGowan agreed that, with each week of the pandemic, the amount of debt individual renters owe has grown. Last fall, said Witter, his clients’ average debt was between $4,000 and $5,000. As months pass and renters continue to miss payments, that’s creeping up toward $10,000 or $11,000.

Housing providers also find themselves frustrated by the pace of the rollout. Jim Henderson, a government lobbyist with the Rental Housing Association of Washington, said that, even if the money is slow to get out the door, it would be hugely helpful to at least know which renters will eventually qualify. So far, however, that has not been the case.

“Neither the resident nor the housing provider knows whether or not rental assistance is going to come on behalf of our residents,” he said. “If the county would affirm that the resident is eligible for rental assistance and will receive it once the funds come in, then that would take the pressure off of everybody.”

Ellerbrook acknowledged that the county is working on improving communication.

Henderson does not support extending the moratorium. Housing providers have struggled under its weight, he said, and the real solution is for assistance to go out the door more quickly.

Antonio Salazar, 46, hasn’t been able to work as a cook since he slipped and fell in the workplace's kitchen, hurting his back so badly that doctors say he likely needs two more surgeries. For a time, he lived off of payments from the Department of Labor and Industries. But in the chaos of the COVID-19 shutdowns, his claim lapsed and his small income evaporated. He’s tried to reopen the claim, but he doesn’t speak any English and has struggled to connect with the right people in the department.

As a result, Salazar hasn’t had money for rent — or hardly even food, for that matter — and is now over $8,000 behind on his rent. The manager of the building tried to come up with a payment plan for Salazar, but without any income, Salazar wasn’t sure what to say.

“It’s very, very difficult,” he said through an interpreter. “Every day you have to try to find food, to find money from anywhere.”

Salazar recently tossed his name into the county’s lottery for rental assistance, which would cover what he owes, plus three additional months into the future. For him, that assistance means everything. But, he said, he’s received little communication about his application. Even if the answer was still, “not yet,” at least he’d know that his application was under consideration. But for now, he’s in the dark.

“If I can't get the lottery, it’s going to be awful,” he said. “It's going to be terrible for me because once they lift the moratorium, then I think I'm gonna be one of the first people to be out on the street.”

King County has spent about $60 million on renter relief since last fall, helping about 9,000 families, said Ellerbrook. More relief continues to trickle out in the form of leftover CARES Act dollars. But lawmakers and officials across political spectrums agree more is needed. Henderson of the Rental Housing Association estimated the need across the state to be about $700 million.

To push that money into the community, the county is taking three paths — one directly to large landlords, another directly with tenants and a third with local agencies that can help its clientele. So far, working directly with landlords has proved the most efficient. Nearly two-thirds of the assistance doled out in 2020 went through large landlords.

By also working with agencies in the city, the county sought to improve the equity of how assistance rolls out. Derrick Belgarde, executive director of the Chief Seattle Club, pointed out that a disproportionate number of homeless and housing insecure individuals in the city and county are Native.

“It was the disparity for our Native community that we went and advocated for,” he said.

But this so-called hub and spoke approach also created some challenges. Each individual agency needs training on the county’s system and many have varying processes for reviewing applications.

The question of whether the moratorium will be extended remains unanswered. The Seattle City Council recently passed a resolution calling on Gov. Jay Inslee and Mayor Jenny Durkan to extend the moratorium at both the state and city levels. Durkan told Crosscut she was still looking at the data and how quickly assistance has been rolling out. A spokesperson for Inslee said the governor has not yet made a decision, but could as soon as this week.

Henderson warned against its extension. Housing providers have been slammed by the past year, he said, and are starting to exit the market, which could lead to a housing shortage.

“These timelines were built; they were anticipated,” he said. “I think that any delay doesn't serve the purpose of getting rental assistance. It's all about getting critical assistance out there.”

McGowan of the United Way, however, said she believes it should be extended at least until the fall. “I think there's a couple of months of backlog as you get this program launched, get money out the door,” she said. The pace of that money will pick up as the American Relief Plan funds are released and then, once that backlog is cleared, is when it would make sense to lift the moratorium, she said.

For Salazar, he needs more time. More time to work out his Labor and Industries claim, more time to figure out his medical issues, more time to find work and more time to get the assistance he needs to stay in his home. If he had the chance, he’d urge Inslee to extend the moratorium. The stress of not working and wondering what will come next has been almost too much for him to bear, choking up as he considers his place right now.

“Mentally,” he said, “it's like you're living in a nightmare.”

The changes are part of a larger push to reduce barriers to entering the legal marijuana system.

With firefighting resources strained and burning harder to contain, many face last-minute changes or cancellations to outdoor adventures.

Podcast | WA group brings science to the legend of Sasquatch

To find the mythical beast, members of the Olympic Project first analyze the evidence.