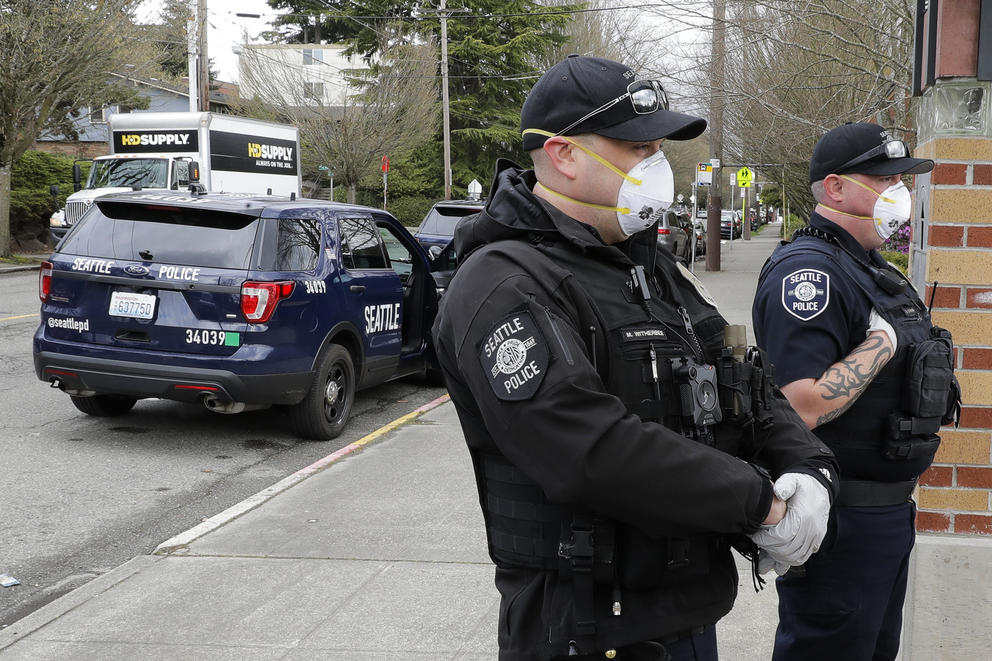 Seattle police officers wear N95 masks as they listen to conversation during a routine call, April 2, 2020, in Seattle. As police and fire departments across the country face personnel shortages from the spread of the coronavirus, masks and other protective gear are being used to keep the officers and firefighters safe and healthy on the streets. (Ted S. Warren/AP)

“I can tell you right now, we could potentially have a lot of officers that could be terminated by this mandate," Mike Solan, president of the Seattle Police Officers Guild, said on his podcast, “Hold the Line with Mike Solan.”

Hyperbole or not, Solan’s prediction walks across a vaccine tightrope for the city, between public health considerations and the potential impact of losing workers who refuse the shot. The Seattle Police Department is already hemorrhaging a record number of officers, many of whom say they feel unsupported in Seattle.

Durkan’s office is projecting confidence that, come the Oct. 18 deadline for workers to be inoculated, employees — especially first responders — will have accepted their jabs in the name of public health.

“The mayor, Chief Diaz, and command staff have been consistently advocating for and urging SPD officers and civilians to get vaccinated,” said spokesperson Kelsey Nyland. “Especially now that the Pfizer vaccine has been approved by the FDA, the mayor trusts that the department and its officers understand the critical importance of vaccinations to protect themselves, their colleagues and the communities they serve.”

But the city’s coalition of unions, including the police guild, is raising the alarm that the timeline is too tight. Shaun Van Eyk, union representative with PROTEC17, one of the city’s largest, and co-chair of the Coalition of City Unions, said the mandate caught him and his members by surprise. In recent days, he’s been negotiating with the city, but said the reality of implementing the mandate — tracking compliance, defining exemptions, accounting for those who may have lost their proof of vaccination — is “exceptionally complex.”

“This whole situation is a little bit of a cart before the horse situation,” he said. “It’s pretty clear to me that there wasn’t a lot of policy or procedural development in advance of that.”

“I think there’s an absolute risk of a mass exodus from the city,” Van Eyk added.

The mandate comes amid the rise of the delta variant. Deaths from COVID-19 remain low in King County, but hospital occupancy levels are as high as they were in early 2021, before vaccines were widely available.

In recent weeks, the Seattle Police Department has seen a jump in new COVID cases among its employees. In just the past 20 days, 29 officers tested positive, a nearly 30% increase in the total number of SPD cases since the beginning of the pandemic. Thirty-three employees are in either isolation or quarantine.

In early July, many workers signed COVID-19 vaccine “attestations” in order to opt out of wearing a mask. Roughly 40% of city workers responded, according to data provided by the mayor’s office, with a broad range between departments.

Just over 20% of employees in the Seattle Police Department signed the forms, the third lowest response rate among departments. By comparison, the similarly sized Seattle City Light had a 50% response rate. Forty-two percent of firefighters — the other first responder department — said they had been vaccinated.

Nyland, the spokesperson at the mayor's office, said those numbers do not reflect actual vaccination rates in any department. Engagement rates for emailed surveys and forms are consistently below 50%, and the entire attestation process became moot on July 30, when the mask mandate was reinstated, she said.

Nyland said the “core concern” is to get employees vaccinated. How tall a task that will be remains unclear. In the coming weeks, the city will launch a “verification platform” to tally the number of workers who’ve already received a shot. Currently, there is no official count of any department.

“We are hopeful that terminations will not be necessary and all unvaccinated employees choose to get vaccinated,” Nyland said. “But we won’t have an understanding of how this will shake out until our verification system is in place, and we aren’t going to speculate.”

Across the country, some police departments have struggled with low vaccination rates — an alarming prospect for a profession that interacts with so many people every day.

In a statement following the mandate’s announcement, Solan said a “majority” of SPD employees are vaccinated and that transmission among police union members is low, although he didn’t say how he knew that. He declined to elaborate.

A mandate, he said, could accelerate exits from the department.

“Our Seattle community is already experiencing a Seattle Police Department staffing crisis,” Solan said in his statement. “Given this crisis, which in part [is] resulting in an alarming crime wave, can Seattle now endure more losses of police officers due to Mayor Durkan’s vaccination order?”

Seattle University professor Jacqueline Helfgott, who often works with the Seattle Police Department, said that, if the mandate pushes out more officers, then she believes the benefits of a mandate will be swamped by the drawbacks.

“We’re in a pretty dire situation with the mass exodus of SPD, and it’s just one additional thing that’s going to create an even more dire situation for the city of Seattle,” she said.

Durkan, though, has focused not on the mandate's possible impacts on staffing, but on what it means for public health.

"Every person who makes a decision not to get vaccinated is not just jeopardizing their own health," she told KUOW, "they're jeopardizing the health of the people around them."