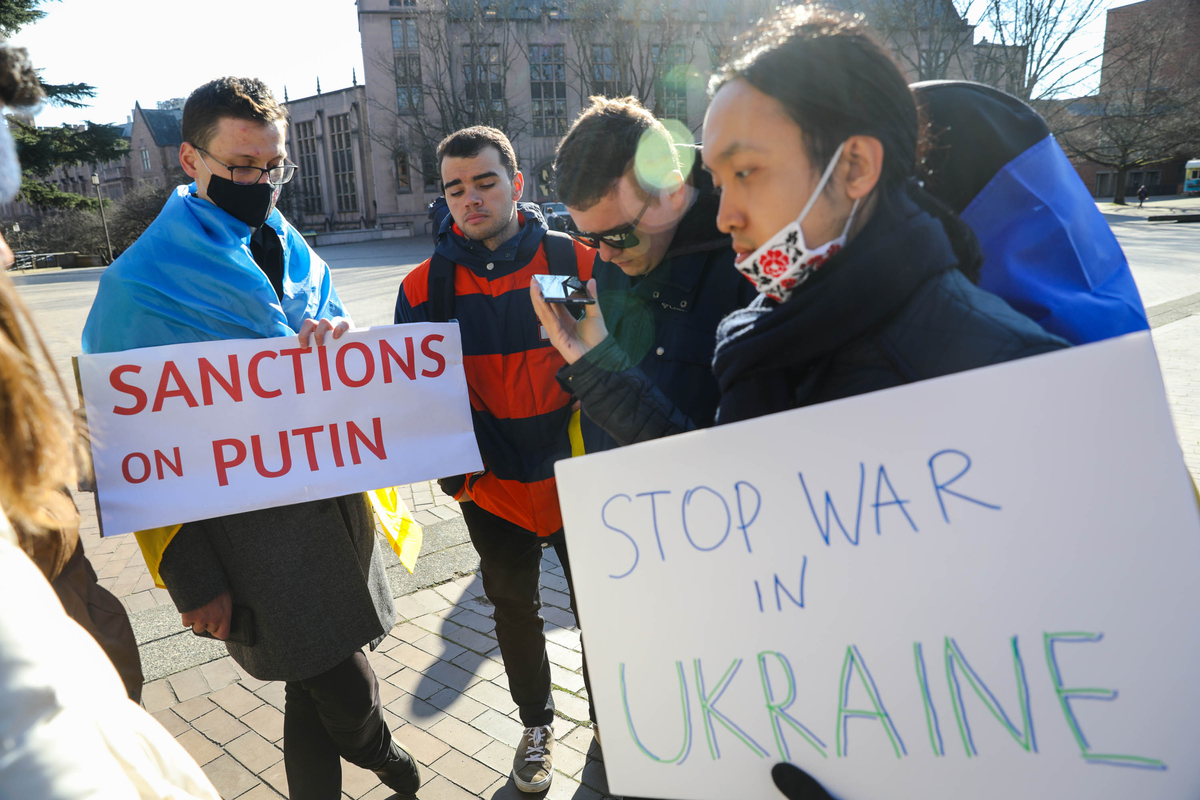 During a rally at the University of Washington in support of Ukraine, a group gathers around a phone to listen to Ukranian President Volodymyr Zelenskyy give a speech with casualty updates and other information. (Genna Martin/Crosscut)

After the Soviet Union's dissolution in 1991, many Washington industries — from apples to airplanes — considered Russia a promising market.

Until a few years ago, Russian consumers paid a premium for large-sized Washington state apples.

That was great for growers who had a hard time selling such big apples in the U.S., said Mark Powers, president of the Northwest Horticultural Council, which represents the Northwest tree fruit industry on public policy issues, such as trade.

“Our Washington state apples and pears were considered a premium brand, and there was a lot of good demand for the product we were growing,” Powers said. “If you’re thinking about volume, [Russia] would be considered a small market — but that doesn’t give it credit to the value of that market.”

According to data compiled by the Washington State Department of Agriculture, Washington state exported upwards of $12.7 million of apples and $10.3 million of pears to Russia in 2013.

But Washington state apples shipped to Russia declined in 2014. That year, Russia invaded and annexed Crimea from Ukraine.

Following the annexation, the U.S. responded with targeted sanctions, namely on assets owned by Putin’s inner circle. But Russia struck back with much more widespread sanctions, including a ban of many U.S. agricultural products, such as the large Washington apples their citizens had enjoyed. From 2015 on, not a single Washington apple has been sold inside Russia’s borders.

Along with any economic sanctions the U.S. has imposed on Russia in response to the invasion of Ukraine, many private companies have severed ties with Russian companies or suspended operations in the country on their own accord, said Derek Norberg. He runs the Council for U.S.-Russian Relations in Seattle, which has worked on strengthening ties between the two countries, namely through efforts involving economic growth and community improvement.

Aerospace manufacturer Boeing, for example, will no longer purchase titanium from Russia, has suspended operations in Moscow and for the time being will no longer provide parts, maintenance and technical support services for Russian airlines, according to a company statement.

“I just don’t see a lot of opportunities or will on either side to have business relationships sustained at this point,” Norberg said. “The U.S. government is putting sanctions in place. Even if they don’t prohibit business activity, I think the wish seemingly of the administration is that U.S. businesses on their own, even if not specifically prohibited by sanction, will choose not to do business with Russia.” 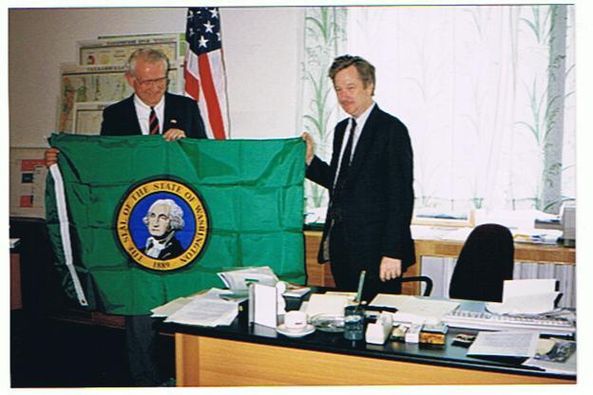 From 1989 to 2011, Vipperman was executive director of the Foundation for Russian-American Economic Cooperation, a Seattle-based nonprofit that worked to increase economic ties between Russia and the U.S., including businesses in the Pacific Northwest.

Much of that business activity was in the far eastern parts of Russia, namely the lands along the north Pacific Ocean the Russian city of Vladivostok near South Korea and Japan. The area was accessible to Pacific Northwest businesses — during the 1990s Alaska Airlines operated flights from Seattle to several far eastern Russian cities via Anchorage, a noteworthy development at the time.

Much of the economic activity was around oil. Other natural resource sectors, such as agriculture, also ramped up activity in Russia — both in the country's Far East and in Moscow and St. Petersburg.

Vipperman’s organization was funded primarily by government grants through the U.S. Agency for International Development, or USAID, an indicator of better bilateral relations between the two countries.

Back then, many believed developing and strengthening business relationships was a stabilizing force in U.S.-Russian relations, she said.

Some of the Foundation for Russian-American Economic Cooperation work extended beyond business and into community development. The group's activities included organizing health fairs in Russia and civic partnerships between cities in Washington state and the Russian Far East.

Powers said the Northwest fruit industry’s work in Russia included efforts to improve the country’s supply chain, such as resolving congestion at the port in St. Petersberg.

“Everyone wanted to see a stable Russia,” Vipperman said. “Everyone was interested in the county becoming open and hopefully democratic. They also wanted to support their own businesses in the U.S.”

And that feeling was once mutual.

Over time, it grew harder for U.S. businesses, especially smaller ones, to do business in Russia. The Asian financial crisis in the late 1990s led to many business deals falling through from a lack of money. Alaska Airlines ended flights to Russia around that time.

And as political relations soured, the U.S. government’s desire and ability to financially support business initiatives in Russia declined.

Vipperman said that as grant funding declined, she and her board members agreed that it had to end the foundation’s operations. As she was closing her organization in the fall of 2011, she noted one political development — Putin’s announcement that he would run for president again.

“I knew, right then and there, things were not going to go well,” she said.

In retrospect, the retaliatory actions by Russia were much broader and harsher than the sanctions by the U.S., said Norberg, who had worked at Vipperman’s foundation before continuing his work with the Council for U.S.- Russian Relations.

Russia often spun its actions, such as the widespread ban of U.S. agricultural products, as an effort to increase domestic production of goods it had imported from elsewhere, he said.

And while the U.S. sanctions in 2014 proved to be weak and ineffective, it’s clear the Russian government saw a need to protect themselves from further economic vulnerability, said Debra Glassman, a teaching professor of business and finance at the University of Washington.

“The lesson the Russian government took from that experience is they should be as sanction-proof as possible,” she said. 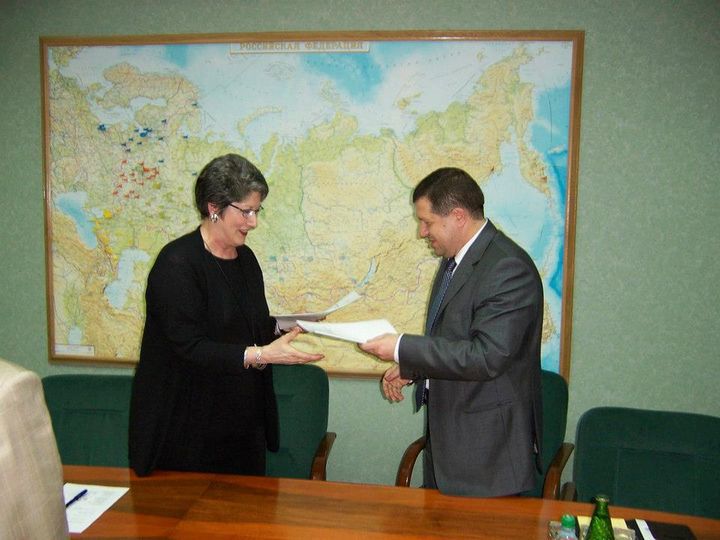 Carol Vipperman, former executive director of the Foundation for Russian American Economic Cooperation, left, with an unidentified Russian customs official in 2004, at the signing in Moscow of an agreement on CLEAR-PAC, a bilateral customs project intended to minimize trade barriers. (Courtesy of Carol Vipperman)

Carol Vipperman, former executive director of the Foundation for Russian American Economic Cooperation, left, with an unidentified Russian customs official in 2004, at the signing in Moscow of an agreement on CLEAR-PAC, a bilateral customs project intended to minimize trade barriers. (Courtesy of Carol Vipperman)

Exports from Washington state to Russia decreased drastically in recent years — from a peak of $2.1 billion in 2014 to just $310 million in 2021, according to trade data from the U.S. Census Bureau.

Most exports — $204 million — were in transportation equipment, likely planes and parts from Boeing and the state’s aerospace industry.

Export of agricultural products, which have been largely banned in Russia, declined from the $20 million to $28 million range in the early 2010s to around $1 million in 2021.

For Powers, while Russia wasn’t a huge market for Washington apples and pears, it was still a valuable one, and the ban did have adverse effects.

Larger apples “can go into other markets, but they have to be discounted,” he said.

Imports of Russian products into Washington state have fluctuated over the years, but two categories have been constant — oil and gas and fishing.

In 2021, the two categories together accounted for $1.53 billion of the $1.84 billion of Russian imports to the state.

Much of the seafood brought into Washington state — and eventually transported to other parts of the country — included crab, in response to a shortage in the U.S., said Robert Hamilton, adviser for trade policy for Gov. Jay Inslee.

While most of the crude oil processed in the state’s five refineries came from Alaska, North Dakota and Alberta, they still received about 10 million barrels of crude oil from Russia in 2021, according to an analysis by Zane Gustafson of the Sightline Institute, a Seattle-based think tank.

The analysis showed that most of that crude oil, 60%, went to one refiner, Tesoro/Marathon Anacortes.

“Cascadia’s oil imports have generated just a sliver of Russia’s oil revenue, but they are a reminder that our status quo energy economy ties us to the ugly geopolitics of petrostates. The faster Cascadia gets off fossil fuels, the sooner we can stop financially enabling Russian aggression,” Gustafson wrote in the analysis. 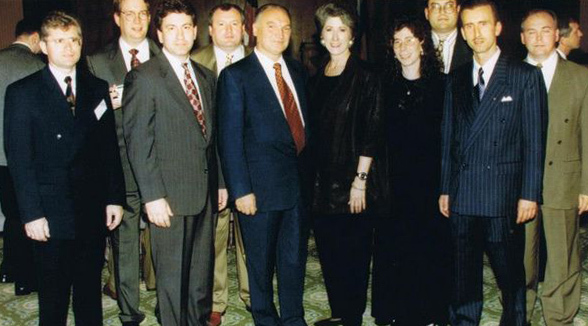 Carol Vipperman, center right, and Deputy Prime Minister Vladimir Bulgak, center left, stand with a delegation from Russia that visited Seattle to celebrate the 50th anniversary of Chkalov’s Transpolar flight during a Russian Connections Conference hosted in 1997 by the Foundation for Russian American Economic Cooperation. (Courtesy of Carol Vipperman)

Carol Vipperman, center right, and Deputy Prime Minister Vladimir Bulgak, center left, stand with a delegation from Russia that visited Seattle to celebrate the 50th anniversary of Chkalov’s Transpolar flight during a Russian Connections Conference hosted in 1997 by the Foundation for Russian American Economic Cooperation. (Courtesy of Carol Vipperman)

On Tuesday, President Joe Biden issued an executive order to ban Russian energy imports, including crude oil. Biden said he took action after seeing bipartisan support for such a ban. The U.S. also imposed financial sanctions, including one on Russia’s Central Bank.

In addition, legislation has been proposed in Congress to end normal trade relations with Russia, which could enable an increase in tariffs for Russian imports. Another measure before Congress would call for kicking Russia out of the World Trade Organization, which facilitates trade between countries. However, the U.S. can’t make such a decision unilaterally, said Hamilton, Inslee’s trade policy advisor.

Closer to home, there are efforts to cut Russian business ties, although most actions must be approved or initiated at the federal level.

Inslee issued a declaration stating his intent to conduct a review to identify any contracts, investments and relationships between the state executive branch’s agencies and Russian state institutions and companies, with the intention to sever those relationships eventually.

Several state legislators introduced a bill last week that would cancel contracts with Russian companies and divert any pension money and investments in Russian companies. However, the state Legislature does not have much time to take action, with the regular session ending today.

Given the actions both by the government and private companies, Russia could end up in a situation only a handful of countries — namely Iran and Cuba — have been in, Norberg said.

The U.S. has largely given up on business as a means to stabilize bilateral relations, he believes. And that reality is hitting Norberg at home. He plans on ending operations of both the Council for U.S.-Russia Relations and the Russian American Pacific Partnership forum organized by his organization.

The calls to his office from businesses looking to enter the Russian market have declined. There is little funding from the private sector or the U.S. government to keep his organization going.

“When Putin essentially did what we thought was the unthinkable — the full-scale invasion of Ukraine — that interest to [keep] those relations maintained [is] largely gone,” he said.