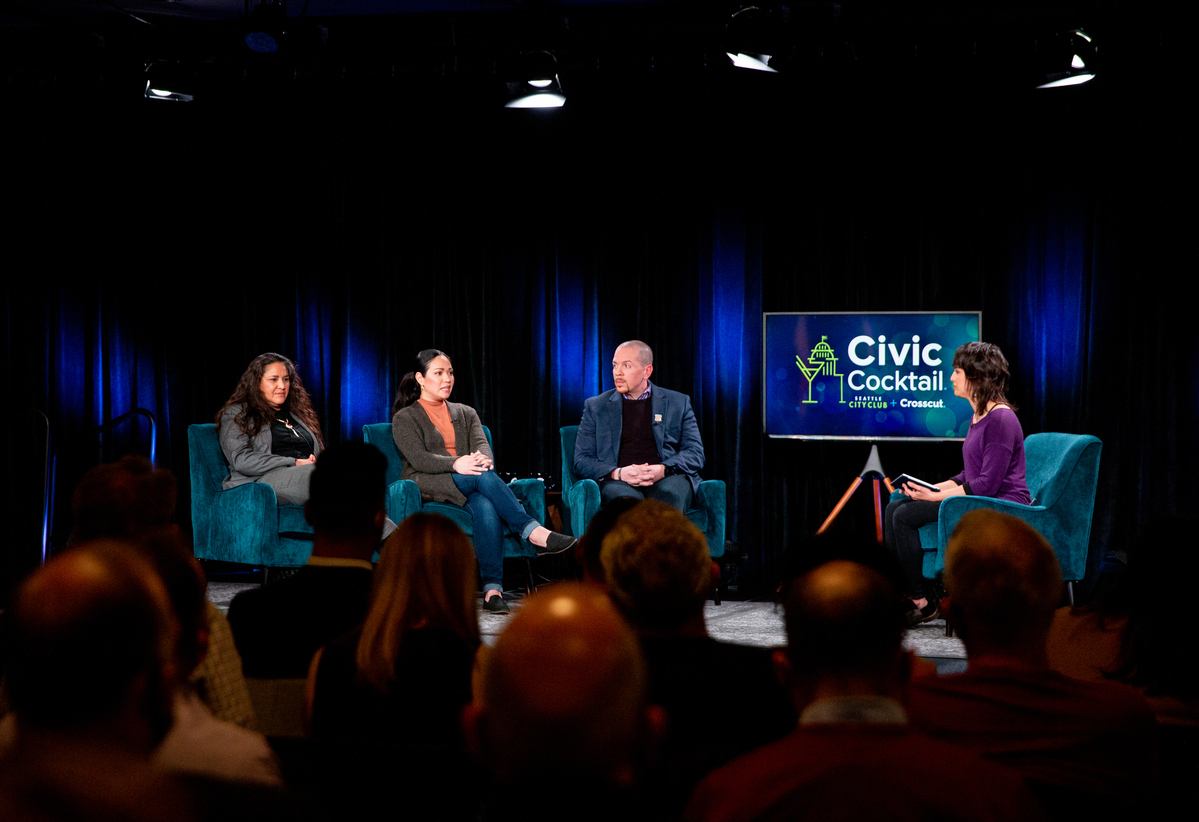 For the community of immigrants and refugees that Quynh Pham, executive director of Friends of Little Saigon, represents, safety means being able to walk around without fear of physical or mental harm. For the business owners she works with, it means locking up at night without fear of returning to a smashed window the next morning.

For Sean Goode, executive director of Choose 180, safety means living in a community where your material needs are met among family and neighbors who understand and care for you, in a space absent of the promotion of racism and racist ideas.

And for Esther Lucero, president and CEO of the Seattle Indian Health Board, safety comes from living in a world without deep racial disparities; where one in three Native American women are not raped; where Native residents don’t have to navigate the world like they’re guests on the planet; where her community can call for support and police protection in times of need without experiencing fear about how officers will treat them.

Pham, Goode and Lucero all joined host Mónica Guzmán on Civic Cocktail, hosted by Seattle City Club and Crosscut. In Part 1 of the conversation, which will be broadcast on KCTS 9 on May 25, the community leaders discussed public safety and policing and the challenges of balancing short-term solutions with systemic reforms.

In Part 2, Guzmán interviewed Seattle Police Department interim Chief Adrian Diaz about changing police culture and shifting police resources away from some responses that might be better handled by social workers.

The panelists agreed that when it comes to crime, reality versus perception can be difficult to parse. Little Saigon, which is centered at 12th Avenue and Jackson Street, did see a surge in violent crime and property crime during the pandemic. The crime abated after a police crackdown in February.

The Seattle Indian Health Board, located on the southern edge of Little Saigon, hired 24/7, armed security guards. But Lucero said it’s not just the staff and clients who have benefited from the security increase. So have residents of an adjacent homeless encampment, who have been victimized by crime have as well.

The panelists want to see more resources invested in housing, public health, mental health, jobs and other basic needs that, when missing, are factors in a rising crime rate. They also want police to seek more input from communities on how they want and need help with safety.

Goode pointed to the success of his organization’s youth diversion program. Launched in 2011 in partnership with the King County Prosecuting Attorney’s Office, the program intervenes with youth offenders before their case enters the court system.

“When young people’s behavior is criminalized because they live in overpoliced neighborhoods, they get access to community instead of a courtroom,” he said of the program. According to Goode, more than 90% of young people who participate in the diversion program don’t return to the criminal legal system within 12 months of leaving it.

Lucero pointed to the Seattle Police Department’s engagement on data around Missing and Murdered Indigenous People as a success of police listening to community. Lucero said the community raised questions about data gaps in the department’s reporting on the issue, and the department responded by working with the Native community to improve its practices.

“The system has laid it out so that police should be the ones to be our protectors and help the community when we can’t deal with certain situations that are violent,” said Pham. “A lot of the dialogue you’re hearing today is about that ability to work with community and be part of community and not be this big authority we all either fear or just look to as the one solution to our problems.”

In Part 2 of the evening’s conversation, interim Chief Diaz responded to some of the panelists’ views on public safety and policing, and discussed some reforms underway in the department.

One is a program meant to both improve new police recruits’ long-term mental health and their community relationships. As part of their training before they go to the state police academy, new recruits will have lessons in trauma-informed practices and social emotional well-being. They also must meet with community members in the precincts they will patrol, sometimes including families who’ve lost loved ones to police violence.

“I’m trying to instill a culture in the department that is accountable, that can rebuild trust in the community and is providing the level of service we want to provide,” said Diaz.

Diaz also talked about efforts to shift police resources away from mental health crises, homelessness intervention and other responses that might be better handled by social workers or medical professionals.

The department has hired five mental health professionals to do some of that work. Several Seattle City Council members are pushing the Police Department to adopt a comprehensive 911-response system similar to Denver’s and Eugene, Oregon’s, which have a robust, nonpolice crisis response team to take over a significant portion of incidents that can be better handled by social workers.

Watch a replay of the whole conversation at 7 p.m. Wednesday on KCTS 9.