During a phone call to his friend David Brewster, Seattle venture capitalist Tom Alberg planted an idea: a web-only news site that could capture some advertising dollars migrating online.

Crosscut blended Alberg’s commitment to growing local journalism and his interest in investing in emerging technology ventures in Puget Sound.

“Venture capitalists see around corners, and they see things that other people haven’t seen,” Brewster said. “[They see] the values in companies that are faltering and how to make that work or an idea that’s ahead of the curve.”

Many know Alberg for his early investment in Amazon — and founder Jeff Bezos — at a time when online retail was in its infancy. He also worked closely with Craig McCaw, a pioneer in the cellular phone industry, as an executive with his company, McCaw Cellular.

Alberg also adopted that forward-looking mindset when investing — both personally and through his firm Madrona Venture Group — in a wide array of business and nonprofit ventures, including Crosscut.

Alberg served as a managing partner for Perkins Coie law firm and helped it diversify its Boeing-heavy client base. He partnered with winemaker Mike Januik and worked with grape growers in Eastern Washington to open Novelty Hill Winery in Woodinville. The Alberg family took a 240-acre rural property in Carnation and developed Oxbow Farm and Conservation Center, a nonprofit encouraging sustainable practices to grow food.

He also worked closely with the University of Washington to develop its computer science program and developed a variety of civic organizations, including one with former Washington Gov. Chris Gregoire aimed at helping business and community leaders respond to the civic issues facing Seattle and the Puget Sound region.

The value of local journalism

His wife, Judi Beck, said Alberg often valued getting information from a wide variety of perspectives before making any decisions. He believed that a well-informed public was crucial to maintaining a strong community, she said. To this day, the mission of Cascade Public Media, Crosscut’s parent company, is “to inspire a smarter world.”

She said that Alberg also valued investing in individuals he believed would make positive contributions to the region.

David Brewster, a longtime Seattle area journalist, was one of those individuals.  Brewster and Alberg became acquainted through Seattle’s political scene but would end up partnering in several media ventures.

Alberg was an investor in Eastsideweek, an Eastside expansion of Seattle Weekly, where Brewster was founding editor, and The New Pacific, a quarterly magazine that addressed big ideas and issues in the Pacific Northwest.

He “was interested in pursuing the truth and looking at things honestly and intelligently,” Brewster said. 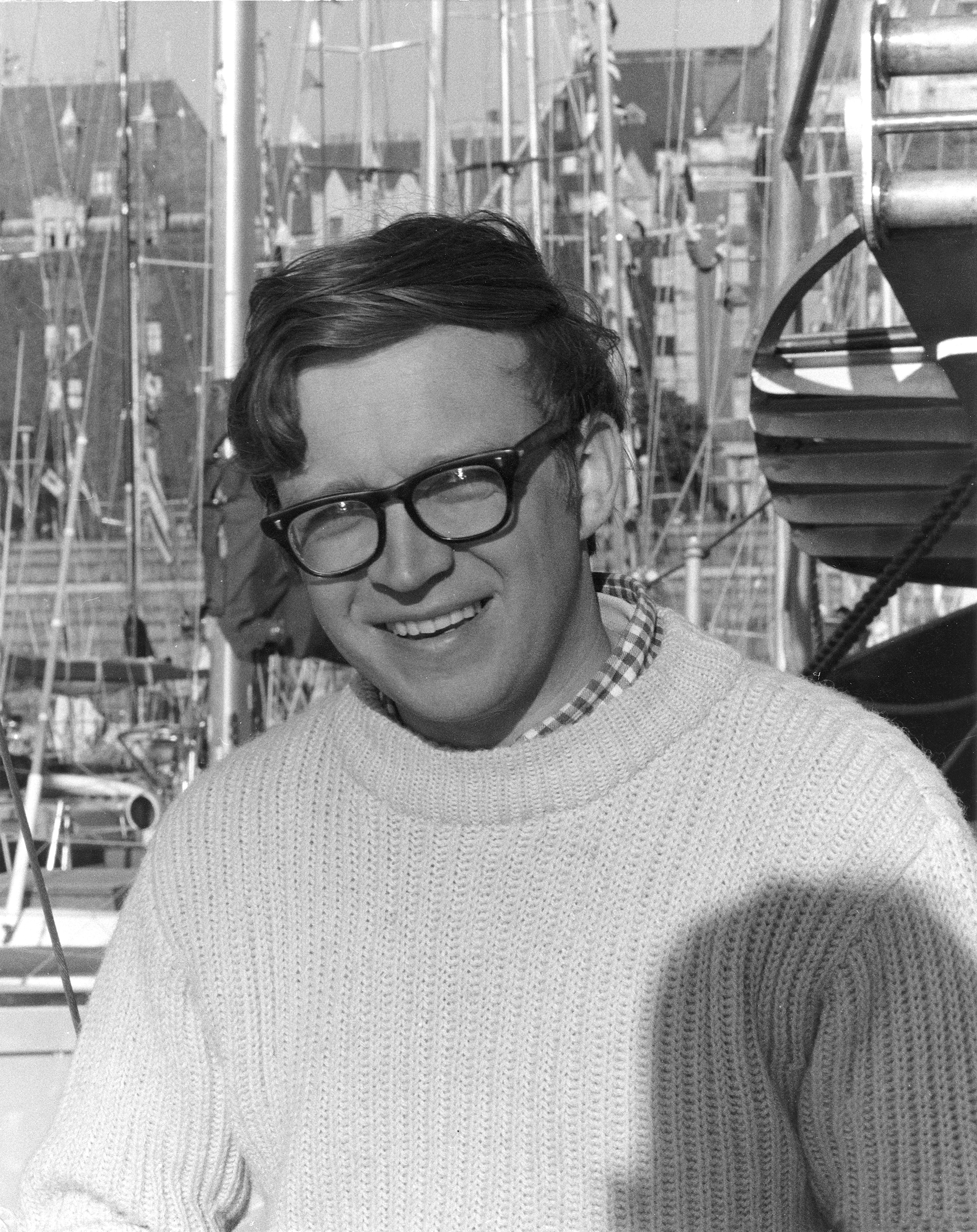 A young Tom Alberg is seen at a marina in the 1980s. Alberg became an avid sailor. (Courtesy of the Alberg family)

A young Tom Alberg is seen at a marina in the 1980s. Alberg became an avid sailor. (Courtesy of the Alberg family)

From startup to nonprofit

In the late 2000s, the journalism industry was dealing with the Great Recession and the negative impacts of more people reading the news “for free” online. Local newspapers were laying off workers and cutting budgets. Within several years, the Seattle Post-Intelligencer would end its print publication and go entirely online. The Eastside Journal, a daily paper in Bellevue, would also cease publication.

But Alberg didn’t buy into the narrative that technology was the enemy of journalism and media outlets, said Beck.

“You figure out the best way to solve your problems utilizing technology,” she said.

Alberg initially believed that Crosscut could capture advertising dollars that were going online rather than to legacy outlets, such as newspapers, Brewster said.

“It meant seizing an opportunity that the legacy media did not see and to get there first,” he said.

Alberg was willing to put his own money and resources to test out his idea. He offered Madrona’s offices, free of charge, to a three-person Crosscut news operation for the first year. The staff included Brewster, who served as Crosscut’s publisher. Alberg and Brewster also raised money through investors.

It became quickly apparent that whatever advertising revenue out there already was heading to search engines, social media networks and Craigslist, Brewster said.

Like the founders of any startup, Alberg and Brewster quickly pivoted and decided to make Crosscut a nonprofit.

That move enabled Crosscut to secure funding from the Gates Foundation for several years.

During those years, Crosscut gained attention for its lively opinion section and its willingness to publish long-form and in-depth pieces.  The site would also start reporting breaking news.

“It was experimental in a lot of ways,” said Joe Copeland, who worked as an editor for Crosscut from 2010 to 2019. 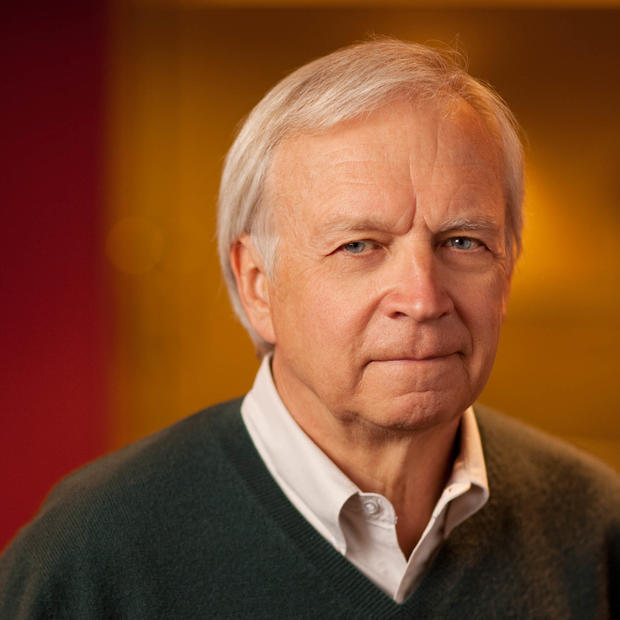 In 2013, Crosscut would again face financial and resource challenges.

Alberg again helped Crosscut find a way to pivot. That search led to KCTS-9, where Beck served on the board. Two years later, Crosscut and KCTS-9 would merge to become what is now Cascade Public Media, a nonprofit.

Both Alberg and Beck recused themselves during the negotiation process, but once the merger was completed, Alberg made sure to provide guidance and other support in the transition, said Rob Dunlop, who was CEO of KCTS-9 and is now CEO of Cascade Public Media.

Alberg would write several opinion pieces in Crosscut, including a 2019 piece looking at the emerging growth and appeal of the Eastside.

Beck said her husband enjoyed the opportunity to write.

“He was a very strong writer and enjoyed having a platform,” she said. “He’s a guy in his office thinking big thoughts. It’s nice to put those big thoughts down.”

He would put down more of those thoughts when he published a book last year, Flywheels: How Cities Are Creating Their Own Futures. The book documents the region’s transformation and explains how other cities could create and cultivate innovation in their communities.

And that was apparent with Crosscut as well. Knute Berger, a writer for Crosscut when it was established 15 years ago and now its Editor-at-Large, took note of Alberg’s constant championing of Crosscut from a scrappy startup to a service under a larger nonprofit organization.

“His smarts, steadiness and wisdom really helped. He will be missed by many,” he said. “We were small fry compared to Amazon, but he really cared about small things too, and we benefited.”