It’s laudable that the state law focuses on preventing family separations, but is it enough? 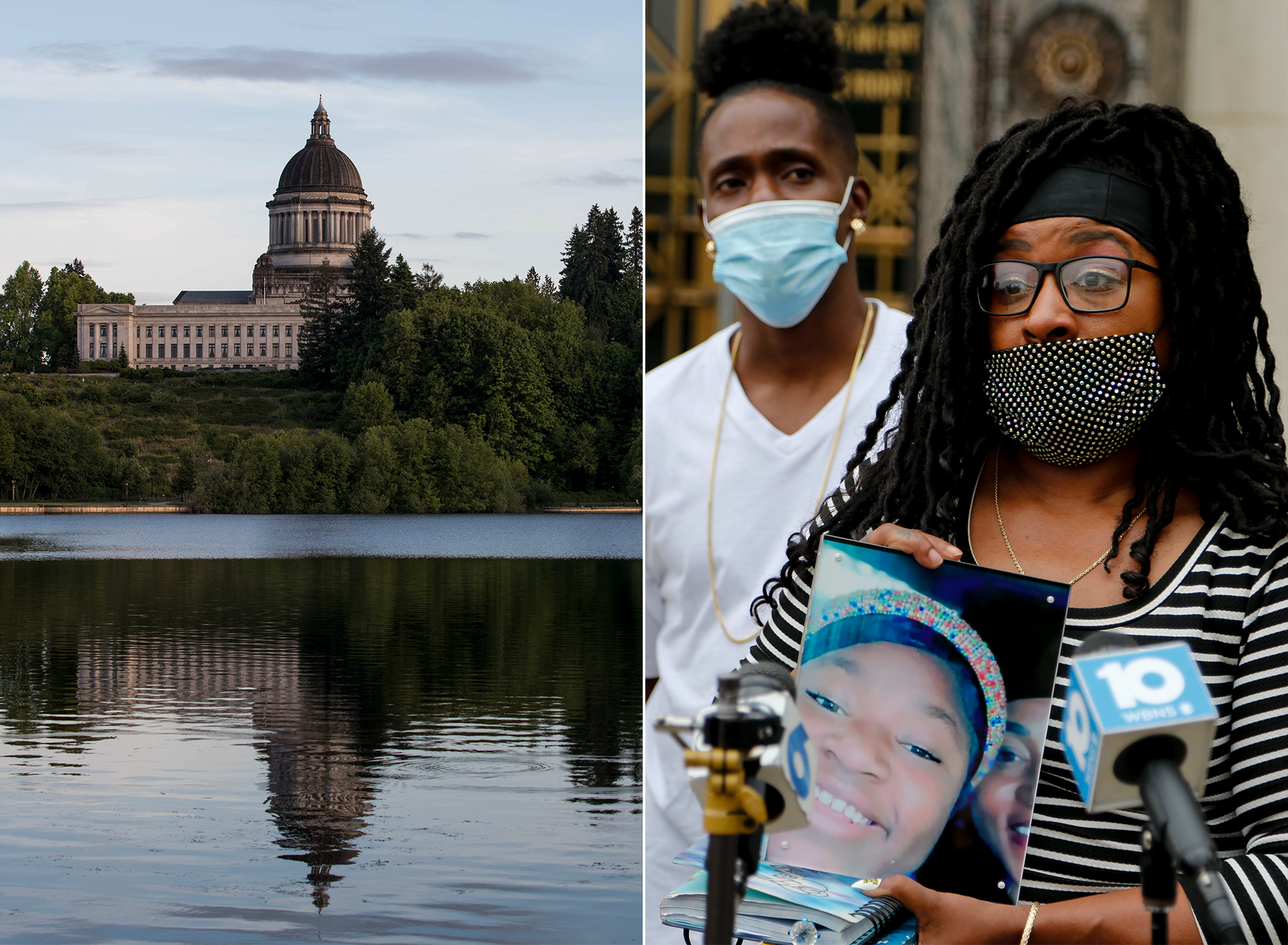 Left: Washington state's capital building is seen in Olympia, Washington on Thursday, June 14, 2017.
(Matt M. McKnight/Crosscut) Right: Paula Bryant, mother of Ma'Khia Bryant, the 16-year-old girl shot and killed by a Columbus police officer on April 20, holds a photo of her daughter while talking about her during a news conference Wednesday, April 28, 2021, in Columbus, Ohio. Attorney Michelle Martin representing the family has called for full investigations into the teen’s fatal shooting by a Columbus police officer. (AP Photo/Jay LaPrete)

Last month, on the same day that 16-year-old foster child Ma’Khia Bryant was shot to death by police in Ohio while attacking a young woman, lawmakers 2,500 miles away in Olympia officially acknowledged that foster care is a disastrous system in need of top-to-bottom reform.

They weren’t talking about changes of the incremental, nibbling-at-the-edges style we’re used to. No, in 2023, when the Keeping Families Together law takes effect, the front end of Washington state’s entire child welfare system will be reconstructed, with new rules that could cut the number of kids in foster care by half and a raft of plans to prevent these family separations from happening in the first place. At least, that’s the promise.

Anyone even moderately familiar with the present system will agree that its outcomes are an indictment. In Washington, foster kids graduate high school at lower rates than homeless youth. Nationally, fewer than 3% earn a four-year college degree. By the time they are young adults, more than 30% will become homeless, and about 59% will have spent time behind bars. Black and Indigenous children are sent into care at rates far outstripping their population, so if we want better lives for youth of color, as well as fewer homeless people and prisoners, foster care is an obvious place to make changes.

Advocates are praising Washington state’s new law for its focus on prevention. The idea is that referring parents to drug treatment and mental health counseling will head off family crises before they get bad enough to threaten the welfare of a child. That part sounds good. We’ve learned that disrupting bonds between kids and their parents, even seriously damaged ones, usually causes more trauma than leaving children at home as their moms and dads get stable — if they get stable.

But the success of this plan hinges on building a drug-and-mental-health referral system that does not yet exist, and simultaneously coming up with money for housing aid. So forgive me if I hold my applause. Foster care has a long, sad history of pendulum swings — toward family preservation or away from it — and either way, kids get hurt.

Keeping Families Together narrows the criteria under which a child can be taken from her home. Inadequate housing, a mom’s or dad’s substance abuse, mental illness or “nonconforming social behavior” — none of these problems alone will be a legitimate reason for putting children in foster care. Instead, the state will have to prove that a parent’s conduct places their child in “imminent” danger of physical harm.

That provision aims to address one of the slipperiest, most vexing aspects of Child Protective Services: its inconsistency. When I shadowed two child welfare investigators to understand how they made these shades-of-gray judgment calls, it became clear that every decision hinged on an individual case worker’s point of view, life experience and personal values. Some whisked kids away at the first sign of risk; others used the threat of child removal as a sort of carrot-and-stick for parents.

I am told that the new law went through many iterations before officials at the state Department of Children, Youth and Families would endorse it — chief among their requirements being the availability of drug treatment and mental health services, though parents will not be forced to use them.

Many of those parents also are homeless, or at risk of it, and the new law provides zero money for housing. “We’re going to have to find a way to be creative,” Ross Hunter, secretary of the department said when I asked him about this last week.

I can’t think of many public officials with more energy and drive than Hunter, so maybe he’ll make it work.

But with its emphasis on keeping more kids at home — and, again, not requiring their parents to use behavioral health services — Keeping Families Together brings to mind a case I covered in 2004, and wish I could forget.

For years, state social workers had known about Marie Robinson’s alcoholism and mental health struggles. Her relatives and neighbors in Kent repeatedly reported the mother of seven to Child Protective Services for neglecting her youngest three sons. A social worker even told Robinson to get assessed for alcohol dependency. But Robinson’s addiction and depression still weren’t seen as a risk to her children — not until an infant and toddler starved to death after going days without food or water while their mother lay passed out in an alcoholic stupor. Our new law could allow the same result.

And if Ma’Khia Bryant had lived here, rather than in the Midwest, I’m not convinced that Keeping Families Together would have helped her, either.

Publicly released details on the Bryant case remain sketchy. We know that Ma’Khia, her younger sister and two brothers were handed over to their grandma after they said their mother was abusing them. (It’s called kinship care, and Washington encourages it, too.) But when Ma’Khia’s grandmother was kicked out of her apartment — apparently because the landlord did not want so many kids around — the children became wards of the state. In other words, this family needed housing, precisely the kind of help that public systems routinely fail to provide.

It’s likely that the Bryant kids also needed trauma counseling. And what kind of support was available to help Ma’Khia’s grandmother help her grandchildren? “Very little, if any,” Ronald Browder, a foster parent and president of the Ohio Federation for Health Equity and Social Justice, told the Columbus Dispatch. “A lot of times in case plans, they put in counseling, but there may not be any realistic way of making sure that can happen.” Between lack of transportation and child care, or simply needing to hold down a job, families already struggling have near-impossible expectations placed on them, he said.

This is the crux of it — in Ohio and Washington state and across the country. If you are poor, we lay down every kind of requirement and regulation, but don’t seem to believe your family deserves real help. That’s why the Bryant tragedy churns my gut. Media coverage readily points fingers — at the police, at the system, and at the family itself — but it rarely scrutinizes our ongoing failure to help people like the Bryants in the first place, before they ever touch foster care.

Want to blame something? Look at all of those who surely saw Ma’Khia’s mother struggling for years before her kids became wards of the state. Where were the interventions that could have supported her or the children’s grandmother back then? Where was the counseling that could have helped a terrified girl long before she became a desperate teenager with a knife?

Washington state has made an important stride forward on foster care, at least philosophically. What remains to be seen is whether we have the will to put real muscle into helping families in need, rather than allowing the pendulum to keep swinging from one focus of blame to the next.