Whether it’s a Black American or a cop, senseless death is a tragedy

News of a Seattle police officer being killed while helping a motorist should remind us of our shared humanity. 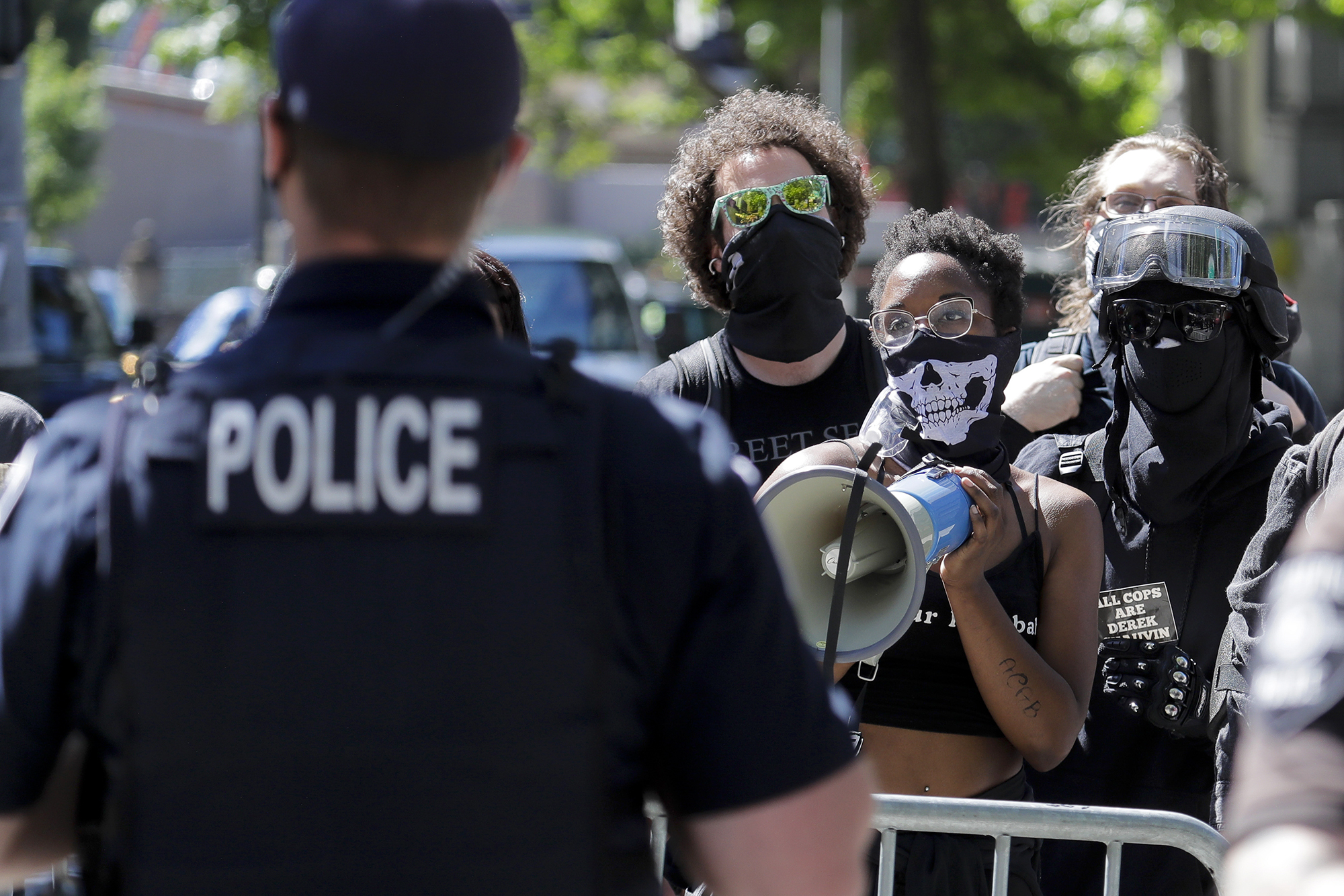 A Black Lives Matter protester holds a megaphone during a counter-protest to a rally in support of police and other law enforcement officers in front of City Hall in Seattle on July 15, 2020. (Ted S. Warren/AP)

“Police Officer Killed …” That’s the partial headline that appeared in my inbox the Sunday before last. I was pretty certain I knew the rest. A white police officer had killed yet another Black person, this time in Seattle. When I clicked to read the full article, though, I was surprised to discover the complete headline was “Police Officer Killed While Helping at a Crash Scene.” On June 13, off-duty Seattle Police Department officer Alexandra B. “Lexi” Harris was struck and killed by a driver along I-5 when she stopped to help out at the scene of a crash.

Primed to process the death of a young Black man or woman, my initial thought was, “I wonder if someone who loved Lexi could understand what those who loved George Floyd, Ahmaud Arbery, Breonna Taylor and the many Black men and women killed by police felt at those senseless losses of life?”

But that thought faded to another: “No one deserves to lose their life in such a tragic way.”

And, finally, I was left pondering the idea that, “Lexi Harris’ life mattered. But so did George’s, and Ahmaud’s and Breonna’s. If all lives matter, then surely Black lives matter. Why is that so hard for so many to see?”

Empathy is the capacity to share another’s feelings — to feel with them. Compassion, on the other hand, is characterized by feeling for someone else — having feelings of warmth, concern and care for another, coupled with a strong motivation to improve their well-being.

Still, empathy and compassion toward others actually may be fundamental to us as human beings. Occasionally it surfaces in dramatic fashion, as when recently a man jumped off a bridge in Maryland to save a baby who’d been ejected from a crashed pickup truck. Or, when officer Lexi Harris stopped to help those involved in a crash, despite being off-duty at the time. These are heroic moments when the boundary between self and other dissolves. We are, then, left with the raw human experience of the plight of another (empathy) and the desire to take actions to alleviate that plight (compassion).

At times like these, humans often spring into action without thinking of the consequences to their own safety and well-being. Sometimes they lose their lives as a result. Like Leland Morris who recently drowned after plunging into a Minnesota lake to rescue his two daughters, who made it safely to shore. Or Lexi Harris, who stopped along I-5 on her way home.

Sadly, a hallmark of systemic racism is erecting and maintaining the barriers between self and other that allow for hate and disdain to thrive. An example of this can be found in the history of indentured servants in colonial Virginia. Black and white, these servants labored together, married together and even ran away together. The colonial planter-aristocracy, concerned about the stability of their workforce, began instituting differential treatment for servants of color. Caught violating colonial rules, such as running away, a white servant might have a few years tacked on to their indentures. But for the same offense, a Black servant’s indentures became lifetime servitude and eventually slavery. Intermarriage was forbidden. Colonial-era courts issued harsher sentences for Black runaways, even if they were caught in an interracial group. Eventually, white servants got the message: Their plight might be difficult, but at least it was better than that of Black workers. Setting one group of workers against another based on race was a means of controlling the labor colonial planters needed. It also created an “in group” of whites, and an “out group” of Blacks.

Religion has also played a role in the division of humanity in this country. While it should be a conveyor of empathy and compassion, religion is often used in just the opposite way. One need look no farther than the Middle East to see Judaism and Islam demonizing each other in the name of God. And in colonial America a new Christianity emerged through the tortured scriptural justifications of slavery.

Social scientists and social psychologists have recently studied empathy and compassion using training techniques to enhance these feelings, and brain-imaging studies to show the effects. When we feel empathy toward another, the same regions in the brain are being activated as if we were experiencing another’s feelings ourself. Empathy and compassion, it turns out, can actually be taught and enhanced. The techniques used are derived from methods first suggested thousands of years ago by sages of Eastern religions: start by turning your feelings of loving kindness inward, directed at yourself. Then, extend them to those closest to you — your family and friends. Then, extend those feelings further to an imagined stranger. And, finally, extend them abstractly to all life. After such trainings, MRI scans showed brain activation in areas associated with positive emotions increased.

Lexi Harris should not have died in Seattle, along a stretch of I-5. George Floyd should not have died under Derek Chauvin’s knee. One thing we can take from both of their deaths is the need to enhance our own empathy and compassion. A lack of these emotions explains why, today, when a Black person says, “Black Lives Matter” some retort, “All Lives Matter.” Of course they do, but if all lives mattered, then George and Ahmaud and Breonna would still be with us. When empathy and compassion are absent, some lives seem to matter more than others.