As Washington state legislators consider building more highways, a new tool could help them understand the impact of their efforts. 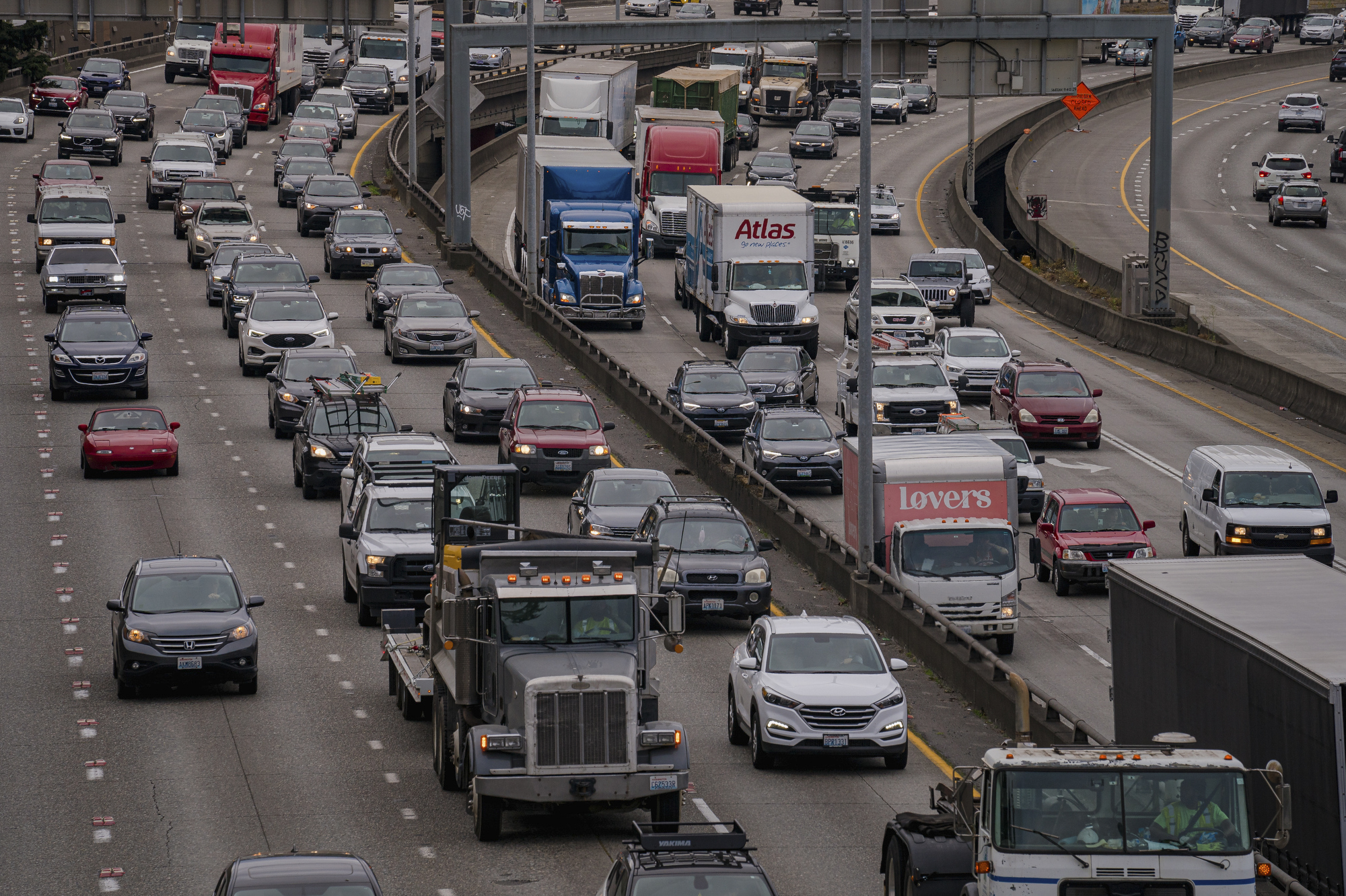 Slow-moving northbound traffic on Interstate 5 on June 30, 2021, in Seattle. (Jovelle Tamayo for Crosscut)

Build it and they will come. Happily, this is true of public transit. It’s the secret to Seattle’s success at boosting ridership over the past decade: more bus service, new RapidRide routes, new light rail stops.

The phenomenon of induced roadway demand was first noticed in the 1930s, most dramatically in New York City, where “master builder” Robert Moses presided over a massive program of parkway and bridge construction. Each new project was necessary, it seemed, to alleviate traffic congestion; and yet, soon enough, the new roads were just as clogged as the old.

The opposite is true, too — call it reduced demand. You might imagine that cutting road capacity would lead to more traffic jams. Indeed, whenever a highway, road or bridge closure is planned, predictions of “carmaggedon” inevitably ensue. But that’s not what actually happens. Instead, traffic congestion is often no worse than before. Sometimes it even improves.

It turns out that more roads cause more driving. This may be counterintuitive, but the effect has been thoroughly documented. The new “generated traffic” doesn’t appear all at once; it can take several years. But the more congested an urban area already is, the faster new roads will fill up. And all this increased driving can’t simply be attributed to growing population. Road expansion leads to more vehicle miles traveled per capita. That also means more greenhouse gas emissions pumped into the atmosphere.

But how much more?

As of today, there’s a new tool to help answer that question. The Rocky Mountain Institute, an international organization focused on decarbonizing energy systems, just launched an Induced Travel Calculator for the United States. You choose your state, urban area, road type and the number of lane miles a proposed project would add. The calculator tells you how many vehicles miles traveled and metric tons of emissions will result once the generated traffic effect sets in.

For example: Twenty new lane miles of interstate highway in the Seattle area will generate 103 million to 155 million additional vehicle miles traveled annually, which under today’s conditions would burn about 7 million gallons of gas. By 2050, the cumulative direct emissions produced by this stretch of roadway would total between half a million and one million metric tons of carbon dioxide.

That range is important. The upper end represents business as usual. The lower end represents a scenario aligned with achieving the U.S. Nationally Determined Contribution under the Paris Agreement, including “100% electrification of new passenger vehicles by 2035 and rapid renewable power development,” according to the calculator’s methodology.

In other words, even with an ambitious timeline for vehicle electrification and clean energy, we just can’t keep building new highways and expect to reduce emissions. That hard truth is what inspired the calculator.

“We’ve aligned the strategy of our work around the Intergovernmental Panel on Climate Change’s 1.5 degrees Celsius carbon budget,” says Ben Holland, a manager on the Rocky Mountain Institute’s urban transformation team. “We came to this realization that even if we put 70 million electric vehicles on the road by 2030, we’d still have to reduce vehicle miles traveled by 20%.”

This imperative is worth pondering as we await the passage of President Joe Biden’s infrastructure plan. In whatever form it emerges from Congress, state governments will have a lot to say about the details of how that money is spent.

“Nothing prevents the states from doing the right thing and distributing more of those funds to cities for transit and building complete streets,” says Holland. “But history suggests that states tend to funnel that money into regional highway projects, of which most are expansions and not repairs.”

Our state has a poor track record when it comes to making these kinds of decisions. According to a recent analysis by the Washington Post, Washington state is “the eighth worst in the country for its share of roads in poor condition, at 27%. At the same time, more than three-fourths of the state’s spending on roads went toward expansion — fourth highest in the nation.”

Holland hopes the Induced Travel Calculator will help advocates at the state and local level educate lawmakers and influence the distribution of transportation funds.

Andrew Kidde, transportation team lead at the climate action group 350 Washington, wants to do just that. He says the Washington Legislature will consider a number of highway expansion projects as part of its next transportation package.

“It’s sort of shocking, I think, that the Legislature will be considering these things without any information about vehicle miles traveled and greenhouse gas impacts,” says Kidde. “You have targets; why do you have them if you’re not going to measure what your projects do?”

Suppose the Legislature could muster the will to stop building new highways. What should it fund instead?

That’s an easy question for Abby Griffith to answer: public transit, and not just for the most urbanized areas. Griffith grew up in rural Ridgefield, 15 miles or so outside of Vancouver, Washington, where she now lives in low-income housing near the edge of the city.

“Downtown there’s a lot of buses, there’s options, but for people like me there’s no way I could afford to live in downtown Vancouver,” says Griffith. “Sometimes it takes me an hour to get to the store, especially if I have to transfer. If we had a transportation system that works, a lot more low-income or disabled people could get jobs.”

Griffith is blind and depends on the transit system to get around. That puts her childhood home out of reach. “Right now I barely see my family unless they pick me up because I don’t have a way to get to there, even though it’s not very far,” she says. “For me, it’s not available.”

Griffith says she hopes that legislators will make public transit a priority throughout the state.

“If someone has a 15-minute drive to the store, it should be 20 or 30 minutes for me, too,” she says. “Other blind people who live in my apartment building don’t even leave the house. It’s not healthy.”

Upending the highway-heavy status quo won’t be easy. There’s political pressure from the corporations that profit from new highway construction and car dependence; trade unions whose members build new highways; and constituents who believe that expansions will ease congestion. There’s also the 18th amendment to our state constitution, which restricts the expenditure of gas tax revenues to “highway purposes.”

But we’re running out of time to make this shift, and advocates are tired of excuses. Tomorrow, the Rocky Mountain Institute and 350 Washington are teaming up with Front and Centered and Disability Rights Washington to launch the Induced Travel Calculator and put it to work. [Disclosure: The organization I work for, the Transit Riders Union, has endorsed these groups’ Just Transition in Transportation campaign.

“The highways have been expanded ever since Robert Moses got his hands on Long Island,” says Kidde. “It’s almost ineluctable. It generates its own next stage, because you’ve always got one community or another complaining, or you’ve invested $5 million into the engineering and no one wants to say we’re abandoning that. It just keeps going. When do we stop? There’s no good time to stop. Let’s stop now.”