Rep. Jayapal on USPS, police protests and the 2020 election

The Seattle congresswoman, in a live interview, outlines the reasons she thinks the 2020 election is so important. 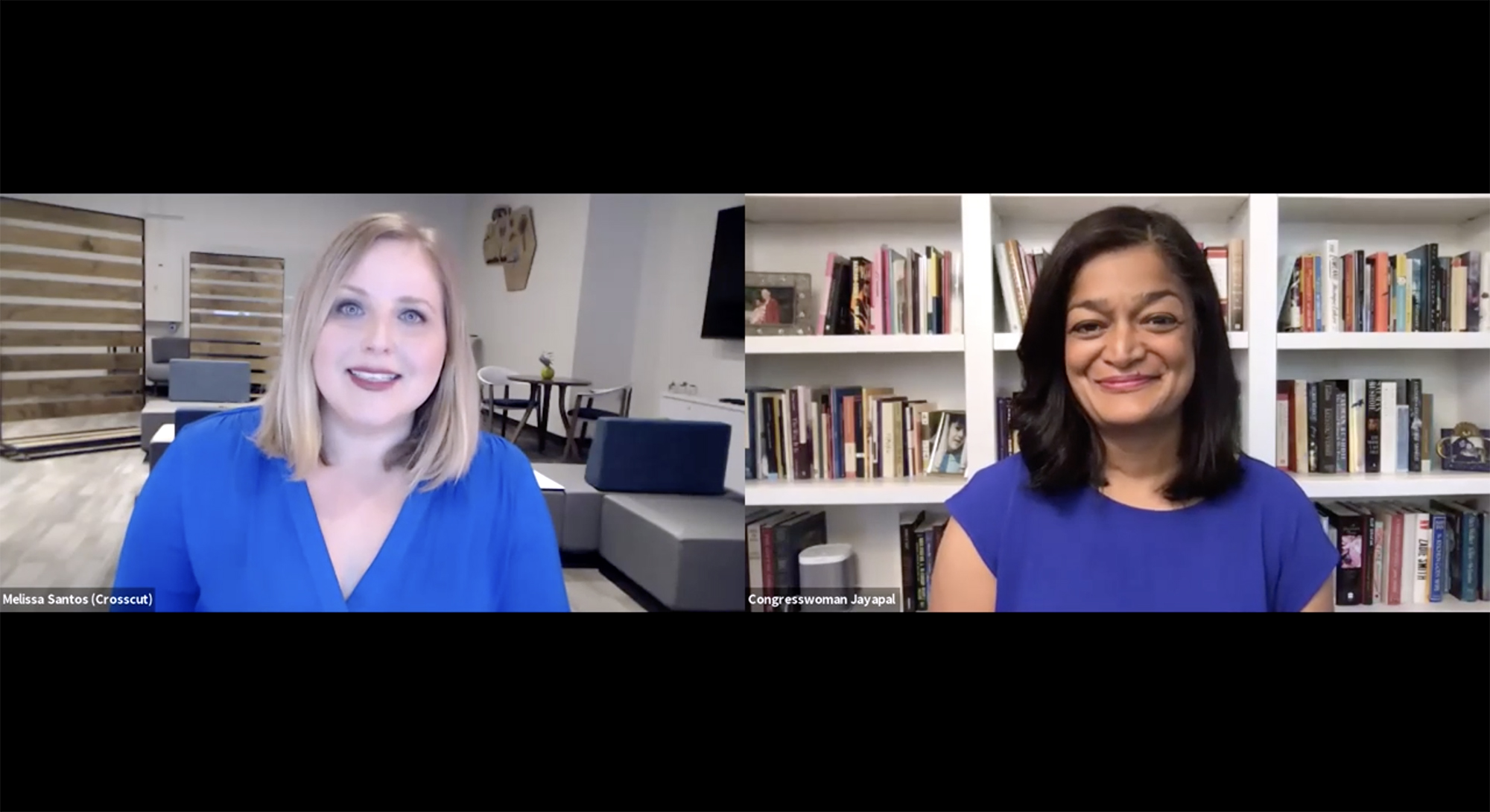 While U.S. Rep. Pramila Jayapal has myriad concerns about the ways she believes the Trump administration has hurt the United States and its people, she promised Wednesday during Crosscut's live Northwest Newsmakers event that she would do everything she could to hold the president accountable for the ways she says he is violating the Constitution.

“He’s destroying our country. He really is,” the Democrat representing most of Seattle since 2017 said near the end of a 40-minute conversation focused on the challenges facing the country and the reasons she believes voters should choose a new president in November.

Jayapal said this week’s Republican National Convention shines a spotlight on the Trump administration’s violation of the Hatch Act of 1939, which prohibits all employees of the executive branch of the federal government, except the president and vice president, from engaging in some kinds of political activity.

The administration has been accused of Hatch Act violations previously, but critics say there have been a number of violations throughout the Republican convention, occurring during a speech by Secretary of State Mike Pompeo, a presidential pardon from the White House during the TV event, a speech delivered from the White House Rose Garden and a naturalization ceremony conducted by acting Homeland Security Secretary Chad Wolf during the program.

Holding political activities inside federal buildings and employing federal workers or administration officials other than the president to stage and carry out these activities form the crux of the potential legal issues.

Jayapal, who is one of 14 naturalized American citizens serving in Congress, called the naturalization ceremony particularly insulting to her, given the president’s actions toward immigrants. Before she ran for Congress, her career included founding and leading an immigrant advocacy organization.

Answering a series of rapid-fire questions from Crosscut political reporter Melissa Santos, as well as questions from viewers, Jayapal laid out her policy priorities for the rest of this year and listed all the ways she thinks the U.S. has taken a wrong turn under President Donald Trump.

She called it criminal the way the nation has not offered financial help to undocumented immigrants during the coronavirus-caused recession, saying help for immigrants no matter their status was included in Congress’ Coronavirus Aid, Relief and Employment Security Act until the president insisted on changes. She noted that some of these immigrants are farmworkers who have been putting food on American tables during the pandemic and have been disproportionately affected by coronavirus.

“This is, at the end of the day, a continuation of the cruelty and the xenophobia and the racism of this president,” she said.

Jayapal tied many issues back to health care, one of her focuses in Congress and throughout her career. When discussing the slowdown of mail delivery by the U.S. Postal Service, she noted that changes to mail delivery don’t just impact the November election, when many people across the nation will be voting by mail, but they also hurt people waiting on prescription medicine or a Social Security check.

Jayapal commended the public for putting pressure on the administration.

“Unless the public continues its phenomenal outcry around the Postal Service, I think Trump will believe he can get away with this,” she said. The congresswoman said she and others in Congress are keeping close tabs on Postmaster General Louis DeJoy, who she said stands to gain financially because of his personal stock holdings in companies that compete with the post office.

Public pressure, including the anti-racism protests, is also encouraging progress in the national debate over the future of policing, Jayapal said. She acknowledged the recent police shooting of Jacob Blake in Kenosha, Wisconsin, and called the killing of George Floyd by Minneapolis police the wake-up call for many, but acknowledged that racism has been an element of law enforcement since its inception as a way to track down runaway slaves.

She called for a radical transformation of law enforcement, with an aim of making public safety more equitable, and is working in Congress to both reform police practice and move money from policing into areas that she believes will help resolve the roots of racism in this country, including housing and health care.

In response to a question from a Crosscut reader, she encouraged people more fearful of cutting police budgets to think about what it’s like for Black mothers who fear sending their children into danger.

“Law enforcement is not working for many, many people,” she said. “We have to have community safety that allows everybody to feel safe.”

Jayapal acknowledged that she and the progressive caucus she helps lead in Congress are not in lockstep with Democratic nominee and former Vice President Joe Biden, but also said the nation will not make any progress with Trump in the White House.

The future is not static, she said, adding that the progressive caucus will continue to push for change beyond the 2020 election. Congress and the White House will need to address the nation’s deep inequality, lack of health care, environmental challenges and other issues, or another person like Trump will be elected in 2024, Jayapal said.

“Trump is both a symptom and a cause,” she said. “He is horrible. He has done horrible things. But he was elected in part because even before the pandemic ever hit, 60% of Americans didn’t even have 400 bucks in their bank account. Eighty-seven million Americans didn’t have health care, were either uninsured or underinsured.”