Democrats Jon Ossoff and Raphael Warnock benefited from more than $7 million in local contributions, many of them from tech workers. 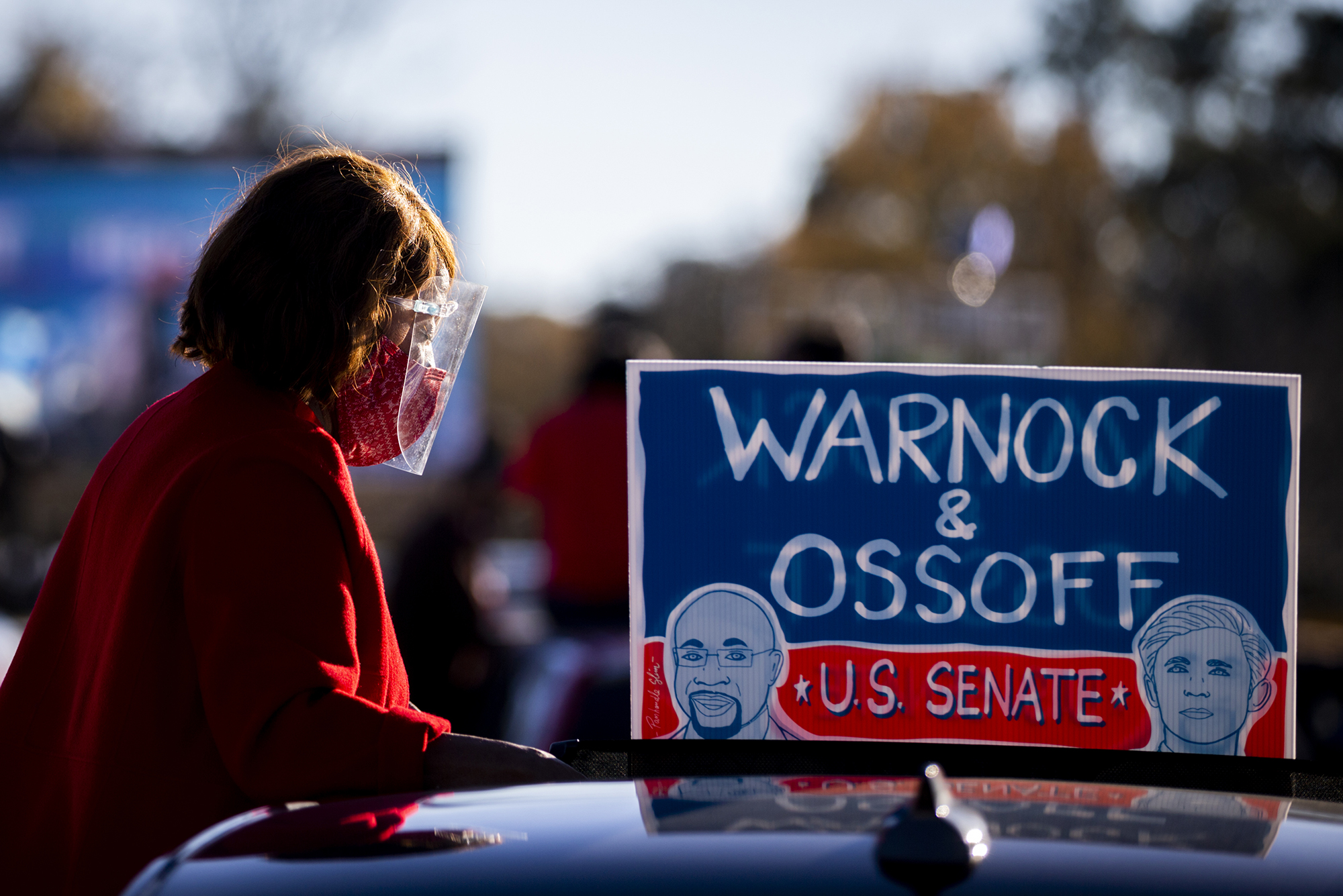 Supporters at a drive-in rally during a campaign stop for Democratic U.S. Senate candidates the Rev. Raphael Warnock and Jon Ossoff, Jan. 3, 2021, in Savannah, Georgia. (Stephen B. Morton/AP)

Washington state residents opened their wallets in recent months to help Democrats flip two Senate seats in Georgia, contributing at least $7.3 million toward the party’s successful bid to take back the U.S. Senate.

The bulk of those individual donations — about $5.8 million — came in November and December, indicating that most Washington state donors were focused on helping Democrats Jon Ossoff and Raphael Warnock win this week’s runoff elections.

On Wednesday, multiple news outlets named Warnock and Ossoff as the winners of the Georgia contests. Their defeat of Republican U.S. Sens. David Perdue and Kelly Loeffler puts the Senate at a 50-50 tie, making incoming Vice President Kamala Harris the chamber’s deciding vote and effectively giving Democrats full control of Congress and the White House for the first time in a decade.

The significance of the two races was not lost on Washington residents, 58% of whom voted for Democrat Joe Biden in November’s presidential race. Without the Senate, the Democratic president would have had much more difficulty pushing his legislative agenda forward.

Per capita, Washington residents gave more to Ossoff and Warnock’s campaigns than people from almost every other U.S. state.

Only residents of Massachusetts, Georgia, California and Washington, D.C., gave more per person to Ossoff’s primary campaign committee, according to a Crosscut analysis of Federal Election Commission data. And Massachusetts’ numbers are skewed because ActBlue, the online fundraising engine often used by Democrats, is based there.

Some of Warnock and Ossoff’s biggest donors from Washington state were employees of major tech companies.

According to the latest FEC filings, local Microsoft employees chipped in about $290,000 to support Warnock and Ossoff throughout the 2020 campaign cycle.

Google employees from Washington state donated about $145,000 to support the distant Democratic campaigns, while University of Washington employees contributed more than $125,000.

Those numbers are current as of late December, but could grow even more when the campaigns file their final FEC reports in the coming weeks.

Todd Donovan, a professor of political science at Western Washington University, said that $7 million is a large sum for Washington residents to spend on two out-of-state races.

In some states, a candidate could run an entire successful campaign for the U.S. Senate with that amount of money, said Donovan, whose work has included examining federal elections.

“That would have been a very healthy campaign budget in Washington not that long ago, for the total contest,” Donovan said.

FEC filings show that individual donors have contributed more than $375 million directly to the four candidates’ campaigns, which had spent about $370 million as of December. Outside groups have spent an additional $440 million on ads and other independent expenditures.

Almost all the money pouring into the Georgia Senate races from Washington state has come from individual donors. But Washington state residents donated significantly less to support Loeffler and Perdue, the Republican candidates.

According to FEC filings, Washington state donors directed only about $2.1 million through December to the main committees supporting Loeffler and Perdue. About $970,000 of those donations came from Washingtonians who identified themselves as retired.

Only about $37,000 of the Republican donations came from Microsoft employees, while less than $11,000 came from Amazon employees in the state.

Vernon Johnson, the director of the Ralph Munro Institute for Civic Education at Western Washington University, wrote in an email that the breakdown of donations to the Georgia races likely reflects how high-earning tech workers tend to be younger and more progressive than other types of corporate employees.

Younger workers, including in tech, align more closely with Democrats on issues involving the environment and racial equity, Johnson noted.

He added that President Donald Trump’s frequent public attacks on technology companies, including Amazon, probably didn’t do members of his party any favors when it came to winning tech worker support.

“I think we can’t discount the role of liberal money, both high-tech and for a new green economy, that probably flowed into the Georgia races hoping to give Democrats control of the Senate and greater leverage, especially for the environmental agenda,” Johnson wrote. “But also, high-tech was being targeted by Trump, and those interests might have weighed in heavily as well.”

Donovan said it’s unclear how much of a difference the money flowing into the Georgia Senate races made in the end.

“Once you start spending $500 million, there are diminishing returns on the money long before that,” Donovan said.

In a left-leaning state like Washington, however, liberal donors often feel that they have to send their money out of state to make it truly count, since many races here aren’t very competitive, Donovan said. Both of Washington’s long-time U.S. senators are Democrats, as are seven out of eight statewide partisan officeholders.

“It’s a progressive state and there are a lot of people who want to be active,” Donovan said.

But at the federal level, at least, he said, “There’s nothing you could send money to in Washington in November that is going to be impactful.”

“...If you want to do that with campaign money, it’s got to go out of state.”