The city’s longest-tenured elected official will face questions about the city’s approach to criminal justice. 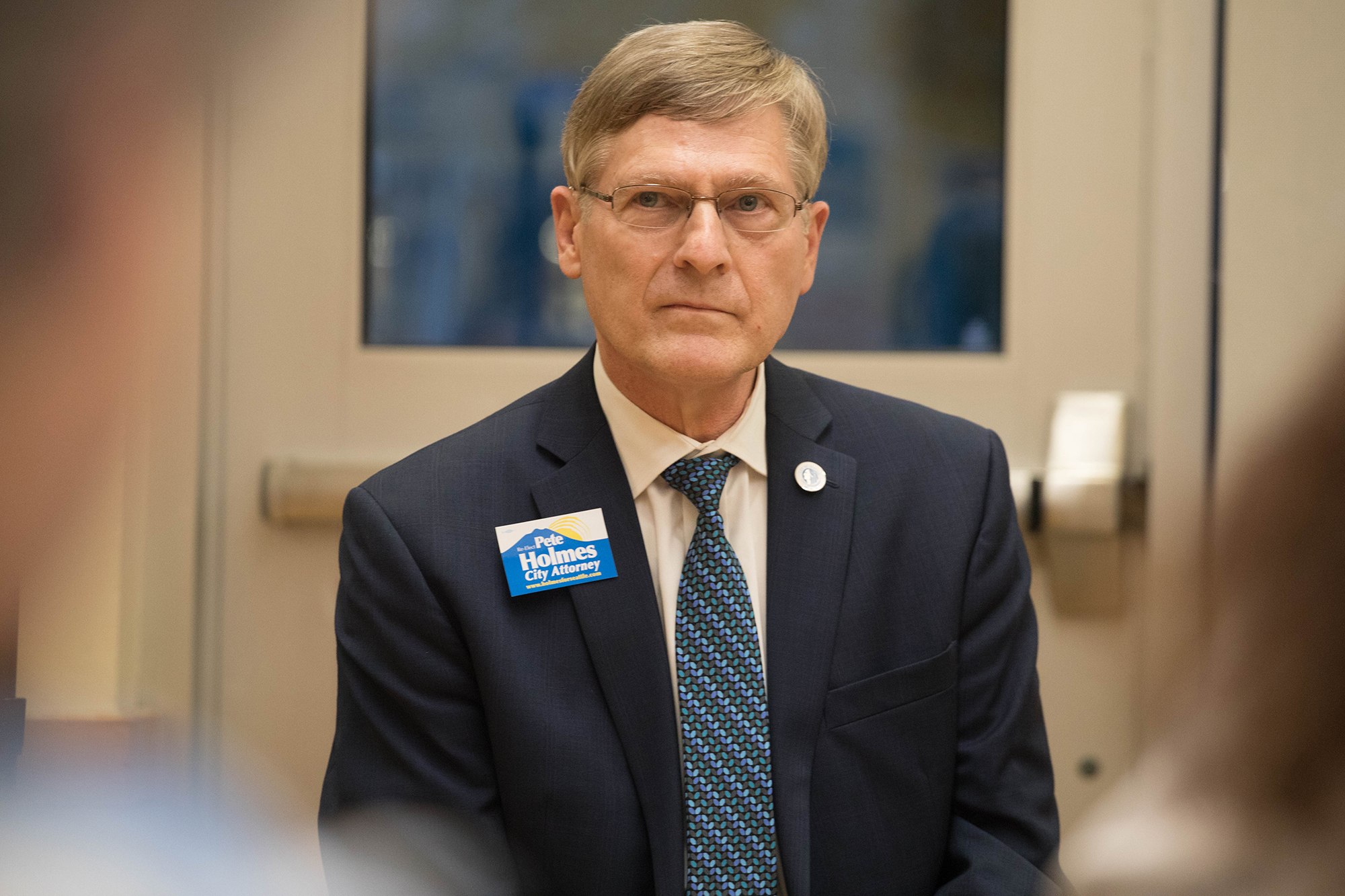 Seattle City Attorney Pete Holmes plans to seek a fourth term. If he wins, he would extend his streak as the city's longest-tenured elected official. (Matt M. McKnight/Crosscut)

Seattle City Attorney Pete Holmes will run for a fourth term, he announced Tuesday, launching his campaign at the height of Seattle’s debates over criminal justice, public safety, law and order and the role of law enforcement.

“This is where I’m called to be,” he said of the City Attorney’s Office.

The state’s only elected city attorney, Holmes won his first campaign in 2009, making him Seattle’s longest tenured elected official still in office. If reelected, he would serve through at least 2025.

Part of his desire to run again relates to continuity, he said. Especially as the city emerges from a pandemic and the Black Lives Matter protests of the summer, Holmes said he’s eager to help new City Hall leadership through the “great reset” of public safety and the economy.

“What I want to do more than anything is roll up my sleeves and help the newly elected leadership decide what kind of Police Department it wants,” he said.

The Seattle City Attorney’s Office is unique; while most jurisdictions elect a single attorney for the whole county, King County and Seattle each have their own elected attorney. Within Seattle, King County Prosecuting Attorney Dan Satterberg’s office handles felonies, while Holmes’ office handles primarily misdemeanors and gross misdemeanors. Holmes’ office also acts as both the prosecution and the defense for the city in various civil cases — suing opioid producers, for example, while at the same time defending the city against outside lawsuits, such as the recent challenge to the city’s new payroll tax.

Holmes’ tenure is in some ways a barometer for how much has changed in the realm of criminal justice over the past decade. When he was first elected, Holmes’ decision to dismiss all pending marijuana cases was seen as a dramatic step away from the so-called war on drugs. Two years later, he became an early endorser of the initiative to legalize recreational marijuana in the state.

More than 10 years later, marijuana legalization is commonplace, and Oregon recently voted to decriminalize possession of all drugs. The Washington Legislature is considering something similar.

Holmes also lobbied the state to reduce the maximum sentence for a misdemeanor to 364 days in order to spare immigrants from mandatory deportation laws that take effect with a year’s sentence. And he was an early backer of the Law Enforcement Assisted Diversion project, which offers case management instead of arrest to people caught committing low-level misdemeanors — often drug use or sex work.

“Prosecutors have to decide: Are they going to exercise their discretion independently without regard to political pressure, or are they going to continue to enable?” Holmes said.

Through the duration of the Donald Trump administration, Holmes joined other liberal elected attorneys as a voice against the former president, defending the city’s right to be a sanctuary city and fighting to open a supervised consumption site for illegal drugs and alcohol.

His tenure has also been defined by the city’s efforts to reform its Police Department, as overseen by a federal judge. As mayors and U.S. attorneys have come and gone with respect to the federal consent decree — or, in Mayor Jenny Durkan’s case, switching between the two positions — Holmes has been with the process for its entirety. Seeing this through to the end is a significant reason he decided to run for a fourth term.

In recent years, the region’s conservatives have come to loathe Holmes, viewing him as too soft on crime. He’s taken hits from more moderate voices as well, who question his office’s charging practices as too lax and too slow.

A former election opponent, Scott Lindsay, has published two reports in particular that have caught on — one highlighting the repeated arrests of so-called “prolific offenders,” the other accusing Holmes’ office of slow and lackadaisical filing standards that turns the criminal justice system into a revolving door. Lindsay lost to Holmes by nearly 50 percentage points in the 2017 election.

Most recently, Holmes has been called on to crack down more on anarchists who break windows while marching through Seattle. His office also received scrutiny after a recently released man assaulted someone outside the jail, leading to his rearrest.

Holmes defended his record, saying that when property destruction cases have come to his office he has not dismissed them, but either begun reviewing them with his prosecutors or filed them for diversion. More expensive property damage cases are referred to the county as felonies.

But he also defended his discretion when it comes to which cases he does or does not file, pointing to the larger questions being debated in the criminal justice world.

“The problem with the knee-jerk reaction of just ‘lock them up and hold them accountable’ is there’s no plan there,” he said. “There’s no attempt to even address the underlying cause. All we know is, ‘We see this cycle of crime — you’re not charging, ergo you’re the cause of the crime.’ ”

“By the time the crime has been committed, it’s already too late,” he said.