Despite opposition from Republicans and gun-rights activists, lawmakers in Olympia are working to deter ad hoc ‘patrols’ and armed protests. 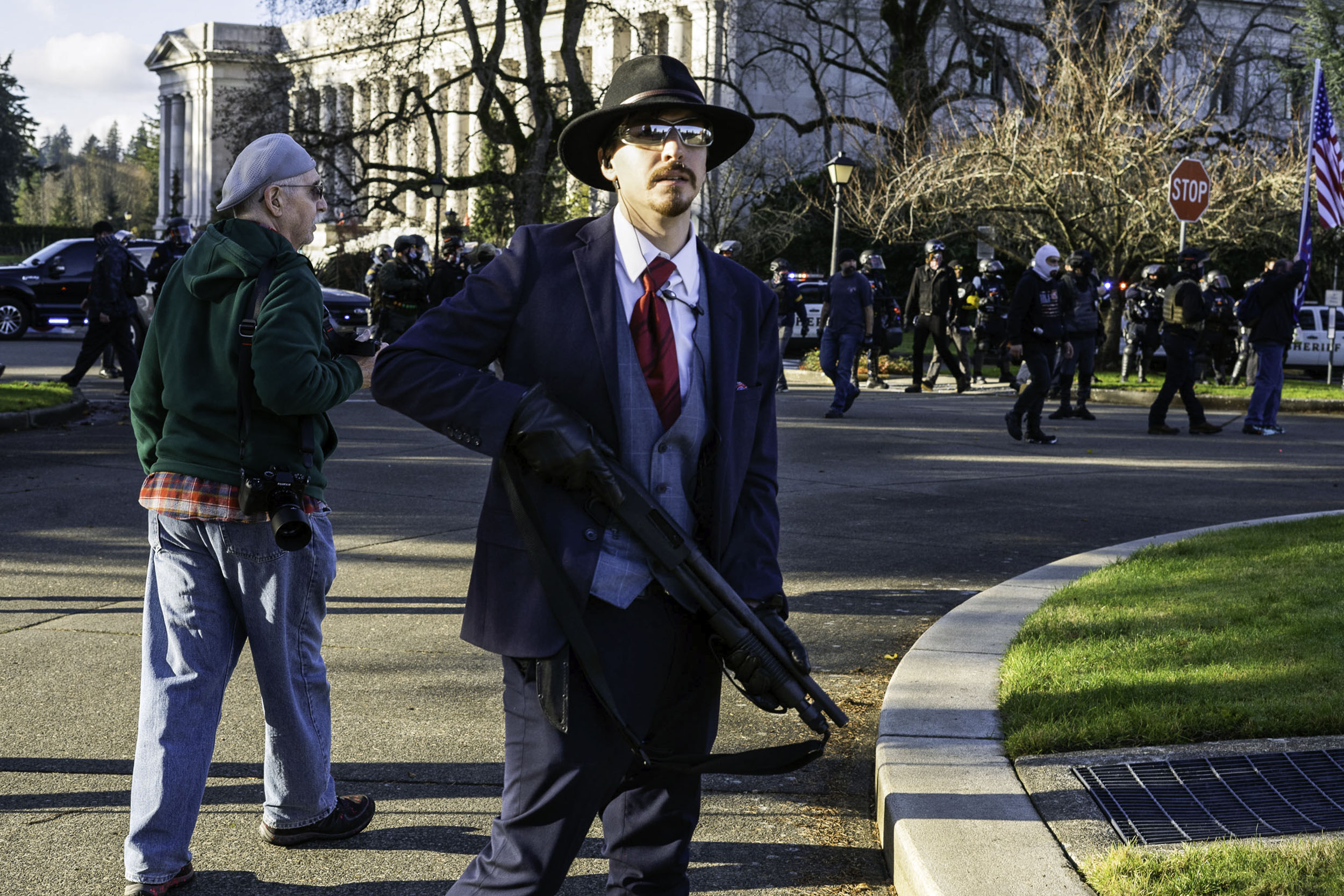 A supporter of former President Donald Trump is seen armed with a shotgun and knife during political clashes on Dec. 12, 2020 in Olympia. Far-right and far-left groups squared off near the Washington State Capitol, and later in the day a far-right protester shot and injured a far-left protester on the Capitol Campus. (Matt M. McKnight)

After a summer of armed, mostly white “patrols” at racial justice protests and the winter insurrection at the U.S. Capitol, Washington state lawmakers are ready to ban guns at demonstrations and the statehouse.

Over opposition from Republicans and gun-rights activists, both houses of the Legislature have passed a ban on weapons within 250 feet of protests or on the Capitol campus in Olympia. Backers say empowering police to remove or arrest armed onlookers addresses widespread complaints from demonstrators and reduces a bona fide safety risk.

The legislation is expected to go to Gov. Jay Inslee in the days ahead. For Lyn Idahosa-Berry, that’s none too soon.

InvestigateWest is a Seattle-based nonprofit newsroom producing journalism for the common good. Learn more and sign up to receive alerts about future stories at bit.ly/invw-newsletter

A co-founder of the Federal Way Black Collective, Idahosa-Berry worked with police last summer to organize a teachers march in support of the Black Lives Matter movement. On the day of the march, Idahosa-Berry was walking the route to make sure it was in order when she said she spotted an armed group on top of a gun shop.

Idahosa-Berry said she spoke with a police lieutenant, who contacted the armed group but told her there was nothing he could do. Although armed with assault rifles and perched atop a building that dozens of marchers would soon pass, they weren’t breaking any law.

“We’re talking about weapons that are traditionally seen as weapons of war,” Idahosa-Berry told a legislative committee hearing on March 16. “We were put in danger for the purpose of ‘protecting property.’ ”

Incidents like the one Idahosa-Berry described had pressured lawmakers to address the proliferation of counterprotesters toting assault rifles well before a mob stormed the U.S. Capitol on Jan. 6. That deadly invasion and an intrusion onto the grounds surrounding the Governor’s Mansion in Olympia around that time propelled the Legislature to act, said Sen. Patty Kuderer, the ban’s prime sponsor.

“There has been acknowledgment … that our inaction on addressing this issue was part of the reason that we are seeing an increase in guns at protests, guns at the Capitol and intimidation tactics in general,” said Kuderer, a Bellevue Democrat.

Another bill that would have targeted members of armed extremist groups was abandoned during this legislative session, although other ongoing legislation requires that standard background checks examine police recruits’ connections to extremist groups.

While paramilitary groups are illegal in Washington state, laws banning them generally are not enforced, as InvesigateWest documented in the runup to the 2020 election. Prosecutors and police describe Washington’s laws as unworkable, although extremism experts argue that a lack of enthusiasm among law enforcement is to blame for their underuse.

‘They are there to intimidate’

Kuderer’s bill, Senate Bill 5038, would make it illegal to openly carry a firearm or other weapon near public demonstrations or on most of the Capitol campus. An offense would be punished as a gross misdemeanor, which can — but rarely does — draw a yearlong jail term.

Whatcom County Prosecuting Attorney Eric Richey and Spokane City Council President Breean Beggs told legislators of situations like the intimidating circumstances described by Idahosa-Berry. Asked to remove armed groups that had taken to “patrolling” protests, police in both cities told local leaders they lacked authority to do so.

Richey said his constituents have complained for years about armed onlookers who gather near the annual Bellingham Pride Parade & Festival. A 5,000-person Black Lives Matter protest over the summer attracted armed vigilantes.

“They were there to intimidate, and they did intimidate,” Richey said. “I’ll tell you, I received a lot of letters from citizens complaining that we did nothing, but there was really nothing we could do."

Kuderer’s bill was amended considerably before passing both houses and now contains a host of exemptions and restrictions meant to ensure police can’t sweep up just any armed person on the street. Washington doesn’t require a license to carry a rifle, shotgun or pistol in public, so long as it isn’t concealed.

To avoid criminalizing accidental violations, the legislation requires that police first tell armed persons to leave the area and give those persons an opportunity to do so before making an arrest. The law would cover only demonstrations with permits and those occurring in public spaces like parks, where demonstrations are broadly allowed.

Law enforcement officers are generally exempt, as are property owners and tenants who happen to reside or operate a business near a protest. Armed people gathering on private property, even at the owner’s request, would not be exempt from the law.

That narrowing wasn’t sufficient for Republicans, who uniformly opposed the bill, or for activists who spoke against it in Olympia.

Alisha Polson, a gun-rights activist from southeast King County, said the law would have prevented her from attending protests against restrictions put in place by Gov. Jay Inslee at the onset of the coronavirus pandemic. A mother of three, Polson said she carries a gun openly but could not obtain a concealed weapons permit because of pandemic-driven closures of government offices.

Addressing the House Civil Rights and Judiciary Committee, Polson said — but did not offer evidence  ­— that “protesters armed with weapons were regularly threatening to come into our rural neighborhoods.”

“To protect myself and my children, I was forced to open carry most of the last year,” she told a March 16 hearing. “I had to endure intimidating glares and comments from those with disapproval.”

The bill’s opponents also have cast it as an attack on the U.S. Constitution. Before voting against the bill on March 19, state Rep. Brad Klippert, R-Kennewick, read aloud the second half of the Second Amendment — “the right of the people to keep and bear Arms, shall not be infringed” — but omitted the preceding phrase, “A well-regulated Militia, being necessary to the security of a free State.”

Also speaking against the bill, state Rep. Jenny Graham, R-Spokane, described it as an “illegal taking of Second Amendment rights.”

Kuderer sees no merit in the constitutional claims put forward by the bill’s opponents. Six states ban firearms at protests, and nine others allow cities to set their own rules. She also doesn’t buy the assertion that protest attendees are arming themselves to defend themselves or somehow help the police.

“The purpose of bringing a weapon to a public demonstration is not to protect yourself, it’s to intimidate,” she said. “They don’t like the message, so they are there to intimidate.”

The state’s restrictions on weapons at protests come as the far-right organizations are undergoing a “fundamental shift,” said Devin Burghart, executive director of the Institute for Research and Education on Human Rights, a Seattle-based research organization that tracks right-wing extremism.

That reordering was evident during the Jan. 6 U.S. Capitol insurrection, Burghart said. That incident brought together a disparate collection of groups linked by a belief that the 2020 presidential election was stolen.

In Burghart’s view, these groups have been encouraged and assisted by elected Republican officeholders, including officials in states who now are pushing to suppress voting along racial lines and disenfranchising Black voters.

Broad public revulsion to the Capitol insurrection, Burhart said, may have forced some on the far right to reconsider their tactics — as did the federal crackdown that led to hundreds of arrests.

“My fear is that people see the Jan. 6 insurrection as a conclusion to the threats posed by the far right, rather than the beginning of a continued threat,” Burghart said.

Some Republican lawmakers in Olympia have opposed any fresh restrictions on paramilitary activity. A few, like Rep. Robert Sutherland, R-Granite Falls, have participated in the armed counterprotests.

Sutherland, who sat on the House Public Safety Committee last year, was one of the armed vigilantes who responded to Black Lives Matter demonstrations in Snohomish. On June 1, Sutherland posted a photo of himself on his Facebook page with three men, all standing together and holding assault rifles.

“Late night tonight defending my little town of Snohomish from rioting and looting by antifa thugs,” Sutherland wrote on Facebook, using language characterized by some as racially coded.

Advocates of new laws targeting armed, organized groups contend that laws already on the books aren’t being used ­— in part because some in law enforcement agree with the paramilitary groups’ aims. Participation by law enforcement  officers in the Jan. 6 insurrection at the U.S. Capitol has been well-documented, and at least six Seattle officers were in Washington, D.C., for the riotous protest.

A move to identify police participation in extremist groups is a small part of a broad police reform bill currently on track to reach the governor.

Senate Bill 5051 would require that background checks for police and corrections officers applying for license in Washington look at whether the officers have any affiliations with extremist organizations. But such an affiliation would not automatically disqualify an applicant, nor would a history of sexual harassment, racist remarks, past felony convictions or having been fired by another police department.

State Rep. Tana Senn had hoped to take on paramilitary organizations directly with House Bill 1283, which stalled in committee. The bill would have expanded an existing criminal statute to penalize anyone in a group where members were armed to intimidate others. Senn, D-Mercer Island, said she doesn’t plan to reintroduce the bill.

There’s a tension, she said, between creating new criminal laws to address intimidation by largely white armed groups and the need to ensure that police aren’t given new tools to “target the African American community.”

“What are the racial impacts of this kind of legislation?” Senn asked. “Yes, it could be ideal and arrest militia. But it could be misused and used against the Black community.”

“We are already in extremely divisive times,” she said, “and I think that anytime you introduce a weapon at a protest, you increase the likelihood of someone getting hurt or killed.”

While paramilitary organizations are illegal under Washington state law, police and prosecutors have been unwilling or, as they often contend, unable to make arrests or bring charges against such groups. Learn more about the issue:

Laws meant to stop the formation of ad hoc armies are archaic and vague, to a degree that police and prosecutors — who have recently had opportunities to use them — describe them as unenforceable.

In the wake of insurrection, Washington lawmakers look for options to derail ad hoc militias

Racial justice demonstrators spent months voicing concerns about intimidation and the danger of mass violence, but with little result, even as some armed groups turned increasingly belligerent across the Northwest. January’s insurrection in Washington, D.C., and a brief standoff outside the Washington Governor’s Mansion overshadowed smaller, earlier anti-government actions. In December, for example, far-right protesters broke into the Oregon State Capitol building. 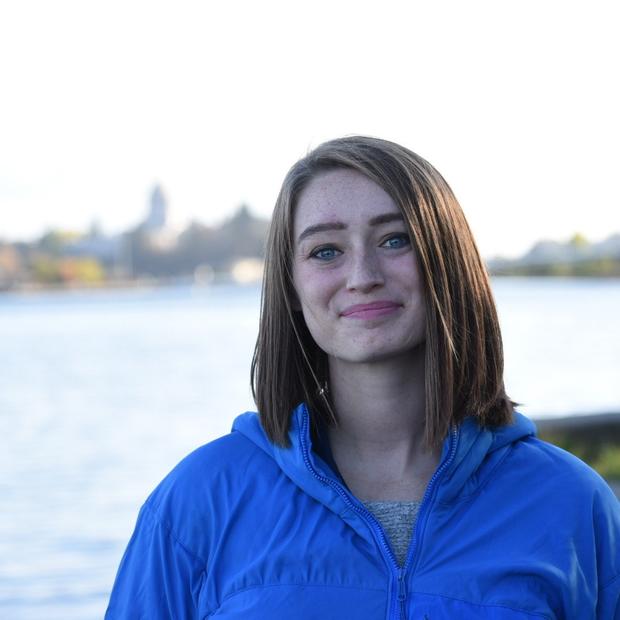 Katie Hayes is an Olympia-based journalist interested in government accountability in the Northwest.