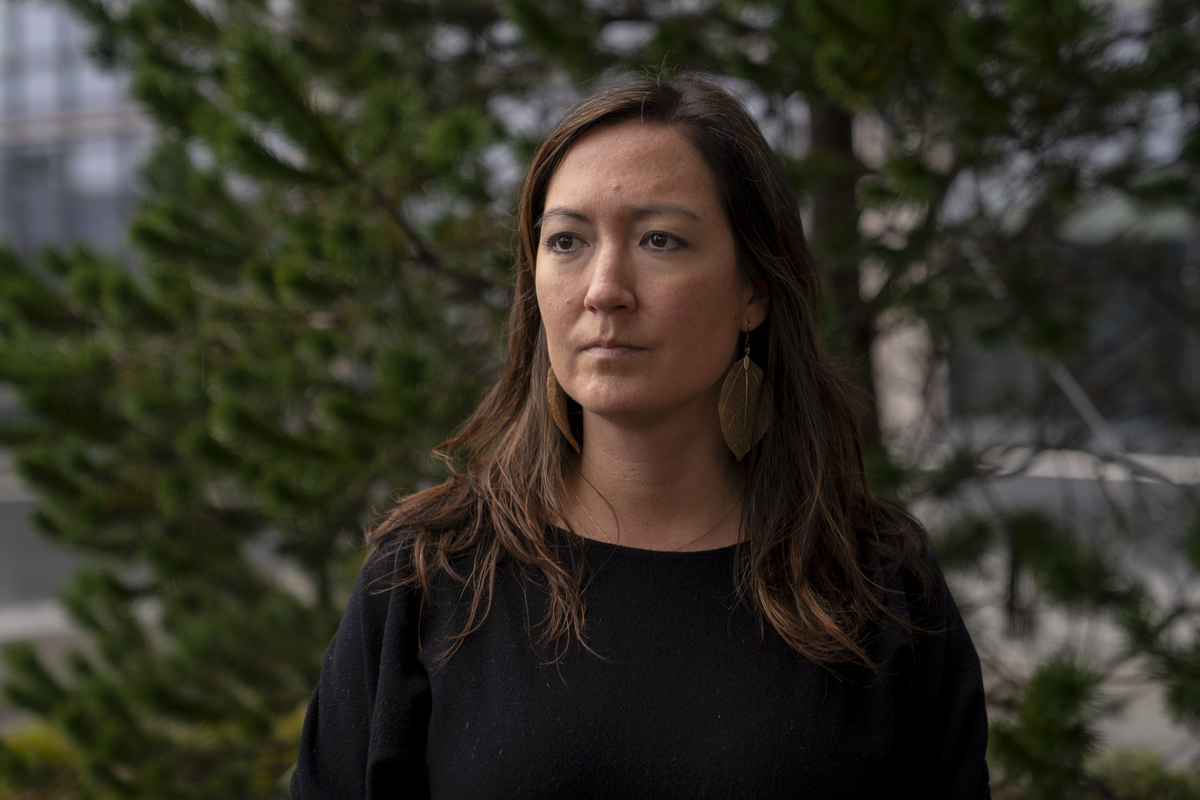 Emily Cantrell poses for a portrait in downtown Seattle on Feb. 28, 2022. Cantrell is a survivor of the 2017 mass shooting at the Route 91 Harvest country music festival in Las Vegas. (David Ryder for Crosscut)

Emily Cantrell doesn’t want what happened to her in Las Vegas to happen to anyone in her home state of Washington.

Cantrell, a longtime Seattle resident, was attending the Route 91 Harvest country music festival in Las Vegas in 2017 when a gunman opened fire on the crowd, killing 60 and wounding hundreds of others.

Five years later, Cantrell and other Washington residents affected by gun violence are urging state lawmakers to ban large-capacity magazines, like the ones used by the Las Vegas shooter.

The high-capacity magazine ban has been introduced several times before in Washington’s Legislature and has repeatedly failed to advance.

This year, it has moved further than ever by finally clearing the state Senate, giving supporters greater hope that it might pass the full Legislature.

While both legislative houses are controlled by Democrats, the Senate is generally considered the more conservative of the two chambers.

The clock is ticking, however. The bill faces a March 4 deadline to advance out of the state House, and the Legislature’s 60-day session ends March 10.

The proposal, Senate Bill 5078, would prohibit the sale, manufacture and distribution of ammunition magazines with more than 10 rounds.

Nine other states and Washington. D.C., already ban magazines of that size, according to the state Attorney General’s Office, which is asking legislators to approve the policy.

Supporters of the measure say that limiting the size of magazines would force shooters to stop and reload, giving people valuable time to escape or confront a shooter and stop an attack.

A 2019 study found that, compared with states that ban large-capacity magazines, states that do not experience twice the rate of high-fatality mass shootings.

The same study, published in the American Journal of Public Health, found that states without bans have three times the annual rate of firearm deaths.

But the bill faces fierce opposition from gun-rights advocates, including the National Rifle Association, which says the proposal would infringe on people’s Second Amendment right to bear arms.

Opponents also question whether the ban would be all that effective, with some detractors saying experienced shooters can reload so quickly that limiting the size of magazines won’t make much of a difference.

“It is not the magazine, it is the skill of the shooter — and many of these shooters do practice,” Spokane County Sheriff Ozzie Knezovich said during a Feb. 16 hearing before the House Civil Rights and Judiciary Committee. 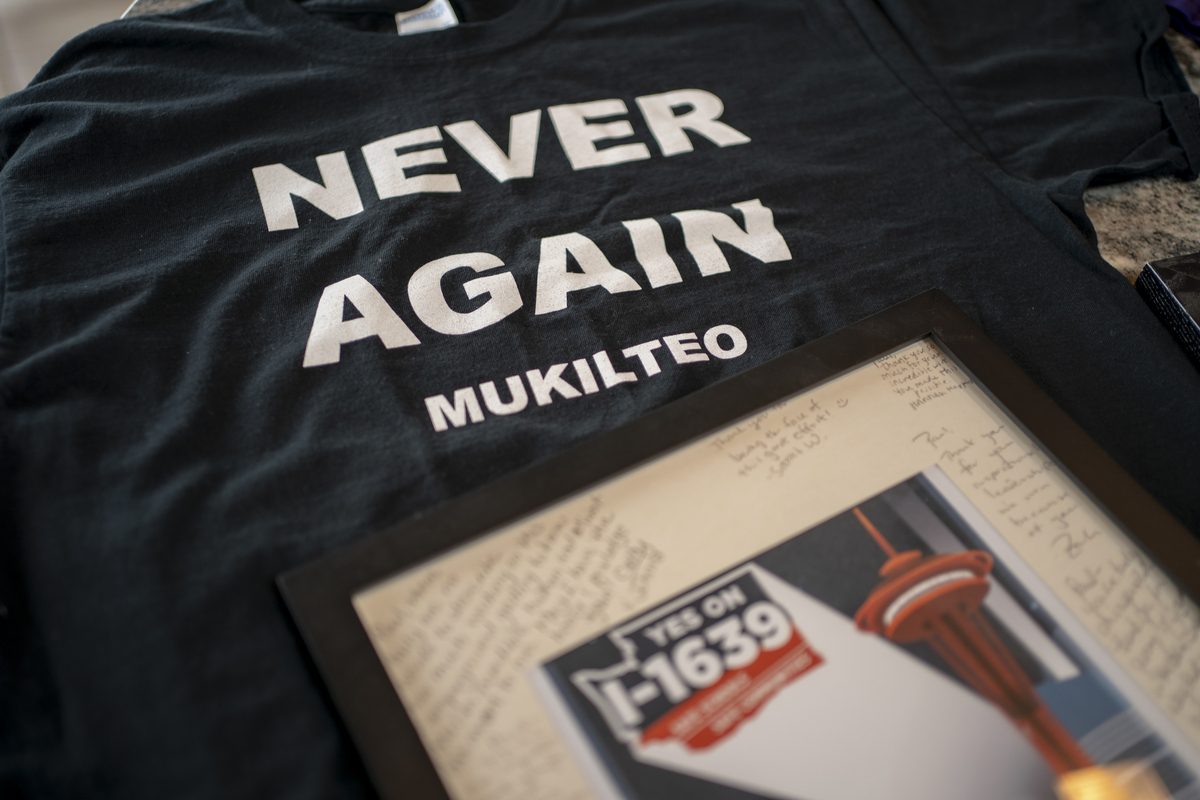 A shirt made following a 2016 shooting is seen with a commemorative artwork celebrating Initiative 1639, which strengthened gun laws in Washington state, at Paul Kramer’s home in Mukilteo on Feb. 27, 2022. His son, Will Kramer, was injured in the 2016 shooting in which three others were killed. (David Ryder for Crosscut)

A shirt made following a 2016 shooting is seen with a commemorative artwork celebrating Initiative 1639, which strengthened gun laws in Washington state, at Paul Kramer’s home in Mukilteo on Feb. 27, 2022. His son, Will Kramer, was injured in the 2016 shooting in which three others were killed. (David Ryder for Crosscut)

Cantrell, now a member of the board of the Washington Alliance for Gun Responsibility, said she’s seen how the brief pauses a shooter takes while reloading can save lives.

During the Las Vegas shooting, people flattened themselves on the ground as the bullets rained down, Cantrell recalled. The Las Vegas shooter was equipped with multiple 100-round magazines.

Whenever the gunman would pause to load more ammunition, that’s when she and others would run, she said.

“The only chance we had of surviving was when he stopped to reload,” Cantrell said during a recent interview.

“... Even a matter of a few precious seconds, that is what would save lives,” she said.

Others whose loved ones have been shot in Washington state also think the bill could reduce the deadliness of mass shootings.

Ami Strahan, whose son Sam was killed in a 2017 school shooting near Spokane, said the fact that no other children died that day shows why limiting a shooter’s ammunition matters.

The shooter arrived at Freeman High School armed with an AR-15 with a 28-round magazine. When that gun jammed, the gunman used a pistol instead, killing Sam and wounding three others.

Strahan doesn’t want to think about how many other students might have died had the shooter’s semiautomatic rifle worked properly.

“Restrictions on high capacity magazines might not have saved Sam, but it can save countless others,” Strahan said during the Feb. 16 public hearing on the bill. 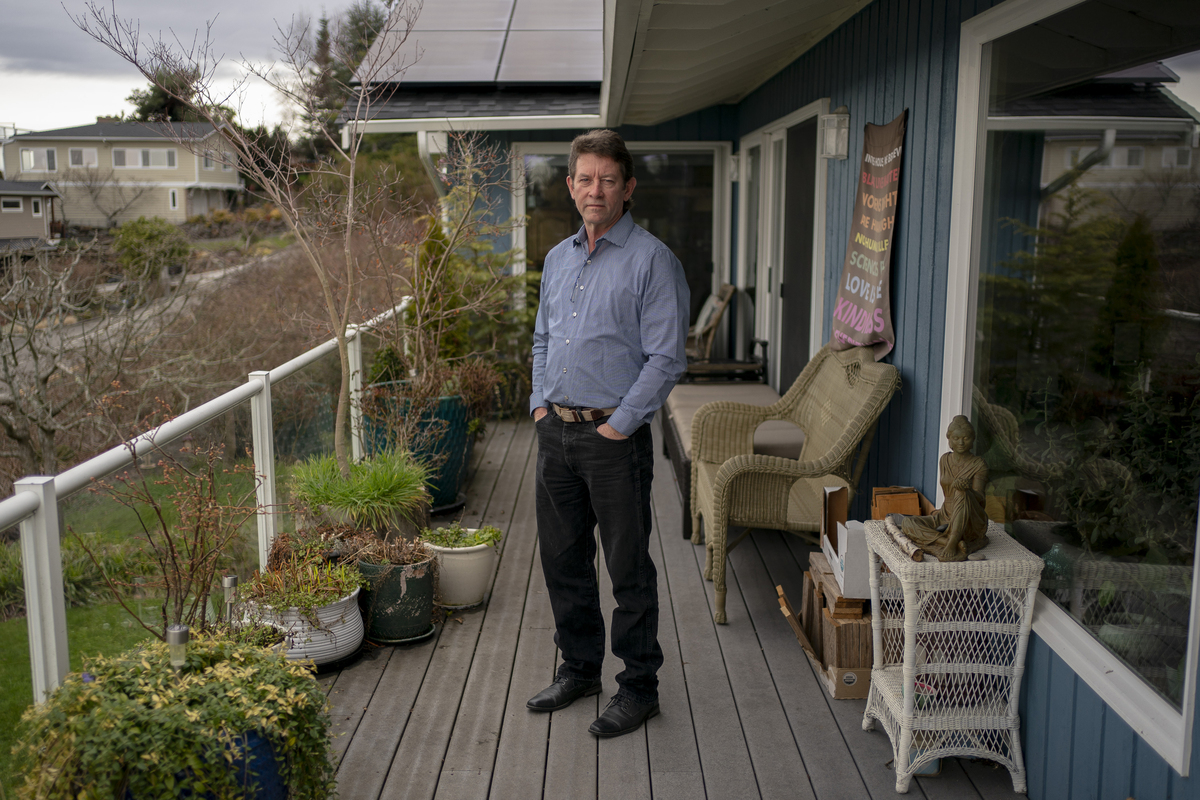 Paul Kramer poses for a portrait at his home in Mukilteo on Feb. 27, 2022. His son, Will Kramer, was injured in a shooting in 2016 in which three others were killed. (David Ryder for Crosscut)

Paul Kramer poses for a portrait at his home in Mukilteo on Feb. 27, 2022. His son, Will Kramer, was injured in a shooting in 2016 in which three others were killed. (David Ryder for Crosscut)

Paul Kramer similarly isn’t sure that the high-capacity magazine ban would have stopped his son from being shot at a house party in Mukilteo in 2016.

But, had the shooter been using only a 10-round magazine that day, Kramer thinks 19-year-old Anna Bui would have had a chance.

By the time the Mukilteo shooter reached Bui, he had already shot and killed two 19-year-olds, Jordan Ebner and Jake Long, and shot Kramer’s 18-year-old son, Will, in the back.

Bui was the third teenager to die that night.

Detectives said the Mukilteo gunman appeared to have fired 27 rounds in short succession, using a 30-round magazine.

Will Kramer survived the shooting, but spent two weeks in the hospital as doctors worked to repair his punctured lung and shattered shoulder blade.

As Paul Kramer drove to the hospital to see Will after the shooting, he didn’t know whether his son would live or die. “That was extremely frightening,” Kramer said.

Paul Kramer said that while some experienced shooters may reload more quickly, others — like the Mukilteo shooter — are new to firearms and would likely take a fair amount of time, giving bystanders a real chance to intervene or escape.

The Mukilteo shooter had purchased the gun only a week before the shooting. He sat in his car reading the gun’s instruction manual before going to the party and opening fire.

Snohomish County Prosecutor Adam Cornell, who prosecuted the Mukilteo gunman, told legislators he will never forget showing up at the crime scene and seeing “three beautiful, dead children.” He thinks multiple teenagers possibly could have been spared that night if the gunman had been limited to a handgun or a 10-round magazine.

Cornell also thinks the 30-round magazine may have emboldened the gunman to commit the mass shooting in a way a handgun would not have.

“... It would be a profound act of political cowardice for the House to decline to give this bill an up or down vote,” Cornell said during the Feb. 16 hearing. 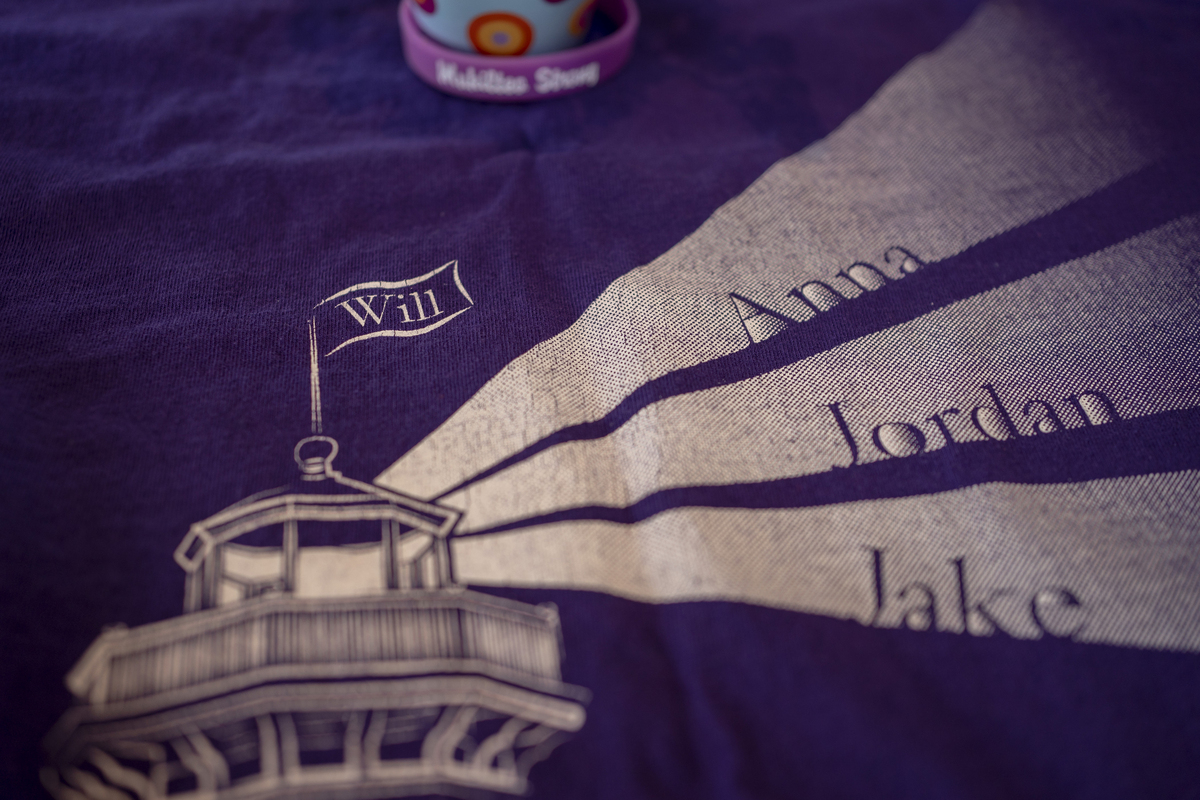 A shirt made following a 2016 shooting is seen at Paul Kramer’s home in Mukilteo on Feb. 27, 2022. His son, Will Kramer, was injured in the 2016 shooting in which three others were killed. (David Ryder for Crosscut)

A shirt made following a 2016 shooting is seen at Paul Kramer’s home in Mukilteo on Feb. 27, 2022. His son, Will Kramer, was injured in the 2016 shooting in which three others were killed. (David Ryder for Crosscut)

Others said they need access to large-capacity magazines for their own self-defense.

During the Feb. 16 hearing, several opponents of the bill who are people of color told lawmakers that the bill would reduce their ability to fight back against against hate crimes and discrimination.

“With the lack of police being able to protect the community, a 10-round magazine is insufficient for me [to defend myself] from a man who is 6 feet 2 weighing in at 250 pounds, wanting to cause harm against me or those like me,” said South Seattle resident Lisa Chang, who described herself as a first-generation Korean immigrant and a “4-foot-11, lesbian minority.”

“We have not been able to stop the flow of fentanyl across our borders, and that particular drug is killing more children in this community, and in this state, and in this nation than guns,” Knezovich said.

Supporters of the ban responded that doesn’t mean the state should do nothing.

State Sen. Marko Liias, D-Lynnwood, the sponsor of SB 5078, is a former Mukilteo City Council member who represents the district where the Mukilteo shooting occurred.

He said it remains important to “get rid of these accessories in Washington state — they’re dangerous.”

“... This measure will make Washington a safer place,” he said.

The bill’s fate is uncertain right now. If it doesn’t come up for a vote in the House by 5 p.m. on Friday, March 4, it will likely be dead for the session.

If that happens, Cantrell, Kramer, and Strahan plan to keep coming back and pushing legislators to pass the measure. The bill also failed to pass last year.

In recent years, Washington state voters have approved several gun-safety measures through a vote of the people.

But the group behind those ballot measures, the Washington Alliance for Gun Responsibility, doesn’t plan to take a large-capacity magazine ban directly to voters if lawmakers fail to act, spokesperson Kristen Ellingboe wrote in an email.

“As we've been saying for years, it's time for legislators to do their job and stop relying on voters to do it for them,” Ellingboe wrote.