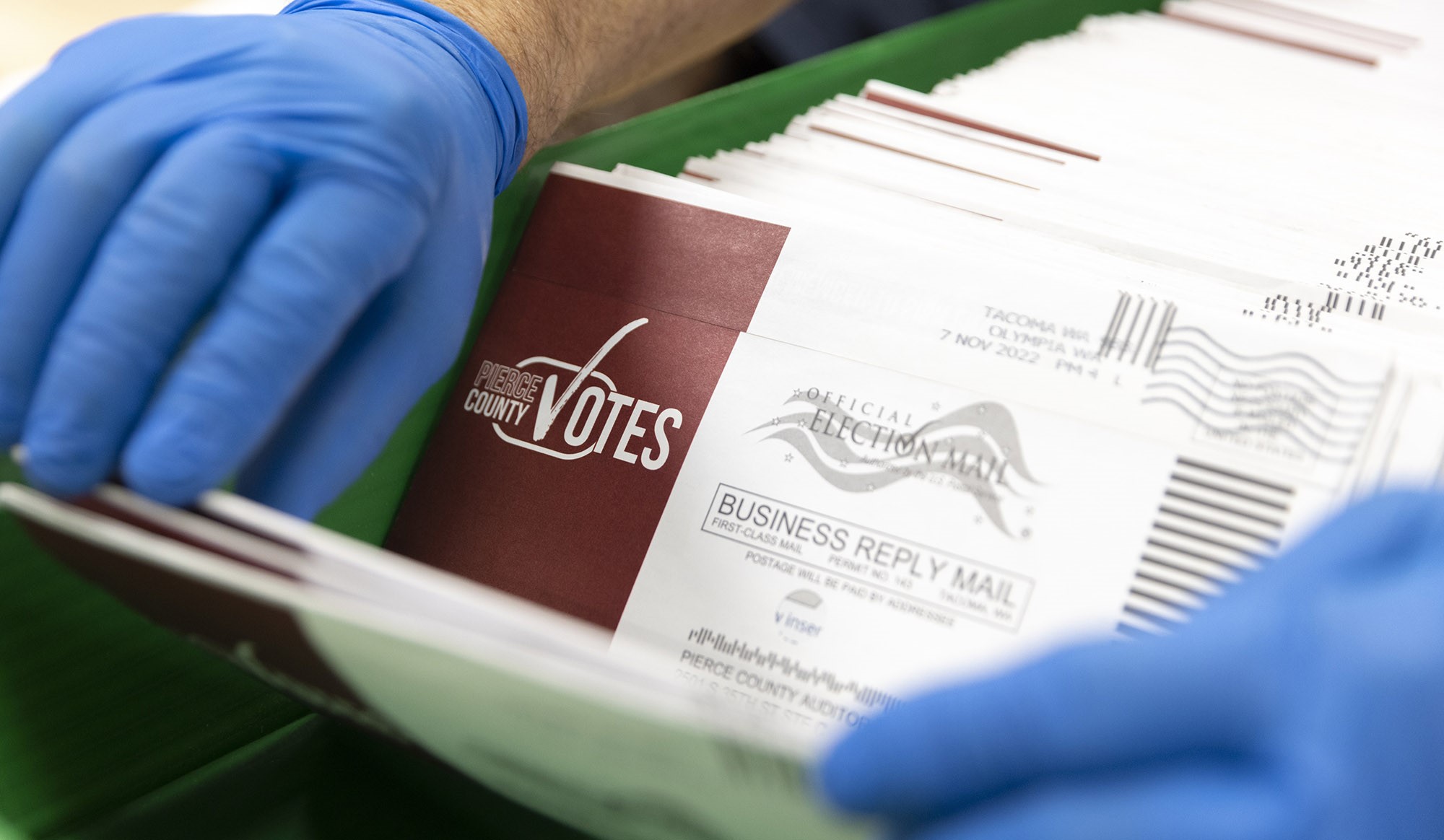 Seasonal election worker Greg Thon of Gig Harbor counts and verifies ballots at the Pierce County Election Center in Tacoma on Election Day. In Washington, youth turnout was higher than the national average; as of Nov. 29, 39% of voters aged 18-24 cast ballots in the state’s midterm election. (Jason Redmond/Crosscut)

At a political event in the weeks leading up to Election Day, President Joe Biden implored Americans to vote. He specifically appealed to young people, saying the Nov. 8 midterm election will help determine their generation’s future.

“I’m not saying you have to shoulder the burden alone. … What I am saying is you represent the best of us,” Biden said. “Your generation will not be ignored, will not be shunned and will not be silent.”

The president’s plea to young voters, historically more progressive and less likely to vote than older Americans, came as politicians and pundits anticipated Republicans would make significant gains in Congress.

Democrats did avoid the so-called red wave, retaining control of the U.S. Senate and losing their House majority by a very slim margin. This was in part due to the estimated 27% of people aged 18 to 29 who voted in this year’s election, a close second to the modern midterm record of 28% that voted in 2018.

“Young voters are being credited right now for saving the election,” said Jack Lobel, spokesman for Voters of Tomorrow, a national organization that works to get young Americans civically engaged.

The youth vote advantaged Democrats by a wide margin, especially in races for the House of Representatives, which next month will swear in its first Gen Z member, Maxwell Frost of Florida’s 10th District, according to Tufts University’s Center for Information and Research on Civic Learning & Engagement (CIRCLE).

In Washington state, youth turnout was higher than the national average; as of Nov. 29, 39% of voters aged 18 to 24 cast ballots in the state’s midterm election. But this still paled in comparison to over 80% of people aged 65 and older who voted.

Polls published this fall suggested younger Americans could turn out in smaller numbers than older voters for this year’s midterms, characterized by divisive issues – like inflation and the Supreme Court’s rollback of protections for reproductive rights – and the potential for Republican gains.

Michaela Coté, who leads Voters of Tomorrow’s effort in Washington, chalked up the relatively lower youth turnout during midterms to a few different reasons. For one, presidential elections may feel more significant to young people. This group might also find it easier to sit out statewide elections because Washington tends to vote for “pro-democracy candidates,” she said.

“They’re pretty sure that they’re going to get the outcome that they wanted without really needing to vote,” Coté said.

Ballots from 18- to 24-year-olds represented less than 6% of votes cast in Washington this year. This age group had the lowest turnout in all counties except for Skamania, Ferry, Asotin and Lincoln.

Coté pointed out that some neighboring counties had widely varied youth turnout rates, like Adams (24.7%) and Lincoln (48.6%).

“I honestly think that every county and every district portrays a totally different story of youth in those counties,” she said.

A change in how youths vote

Though youth turned out less than other voters, advocates are optimistic. Growing up, Coté remembered her peers feeling like their votes didn’t matter.

“In the last, I want to say two years, I’ve kind of seen this shift in the youth,” said Coté, a senior at the University of Washington. “Everybody’s starting to encourage each other.”

Coté, for instance, has been politically active since high school, voting and protesting for different causes. But it was the U.S. Supreme Court’s June overturn of Roe v. Wade that pushed Coté to take on her role with Voters of Tomorrow.

She refuted the age-old narrative that young people are apathetic, arguing that voters in this group feel disempowered.

A poll from the Institute of Politics at Harvard Kennedy School found that, in 2022, 18- to 29-year-olds were more likely than in 2018 to say political involvement rarely leads to tangible outcomes; politics is ineffective in meeting the country’s challenges; and their votes won’t make much difference.

Still, some data suggests that Coté’s perspective on shifting youth voter behavior isn’t just anecdotal. CIRCLE reported that ahead of the 2020 election, young people were more likely to say that they had tried to convince people to cast ballots and help register voters than after the 2018 midterm elections – though turnout generally tends to be higher in presidential elections than in midterms.

"The 18-29 vote margin of 63% Democratic v. 35% Republican [in 2022] should be a wakeup call for GOP policies that are experienced as threatening the values and life chances of most young people today,” Lance Bennett, a professor emeritus of political science and communication at the University of Washington, wrote in an email. 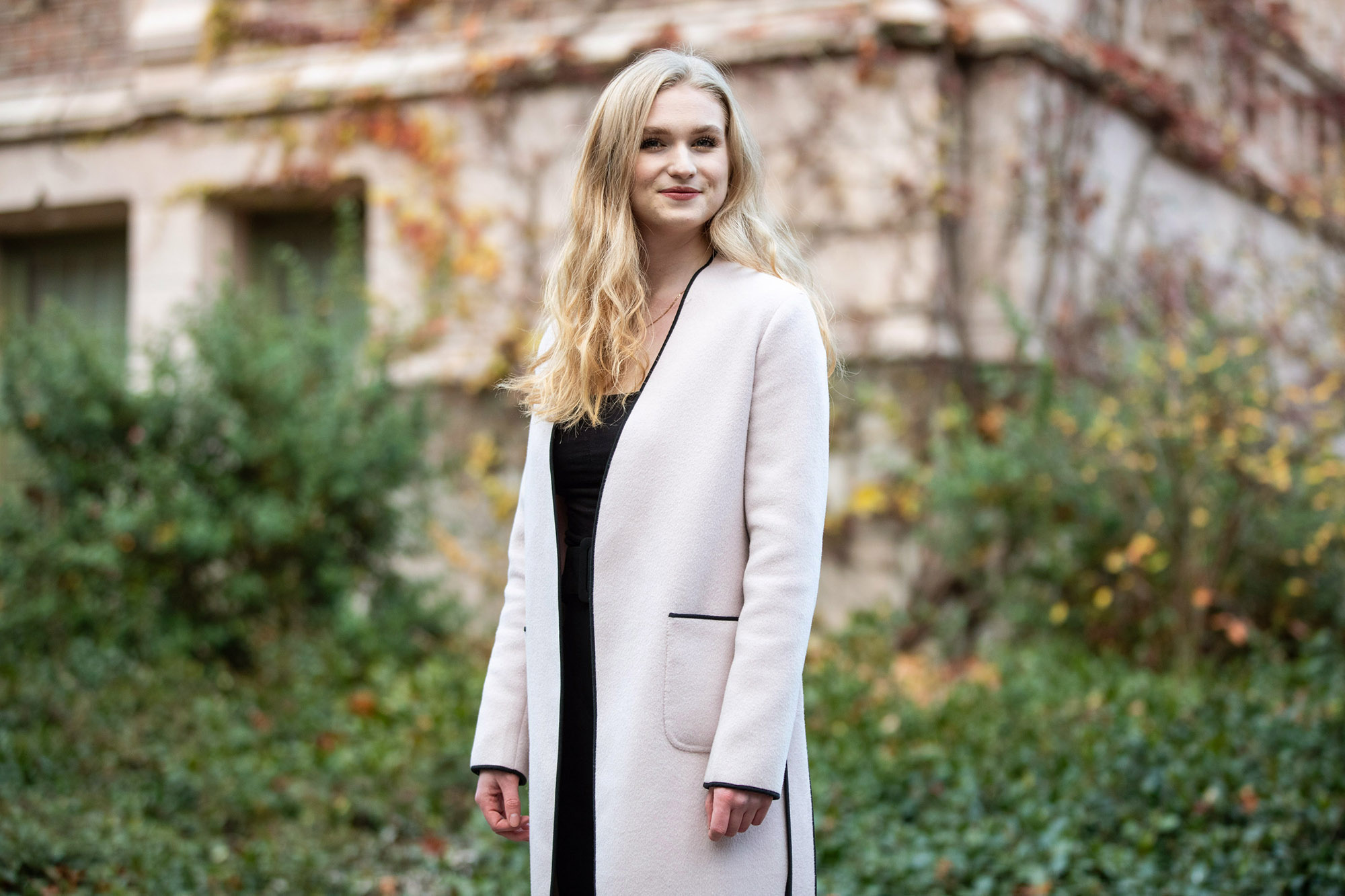 Michaela Coté, the Washington state lead for Voters of Tomorrow, on the University of Washington campus on Dec. 1, 2022. (Amanda Snyder/Crosscut)

Michaela Coté, the Washington state lead for Voters of Tomorrow, on the University of Washington campus on Dec. 1, 2022. (Amanda Snyder/Crosscut)

Low turnout among young voters is “not a new phenomenon,” said Mark Smith, a UW political science professor, noting the pattern goes back decades. Several factors can influence whether or not someone casts a ballot.

“The more stable that people are, the longer they’ve lived in a place, that affects their likelihood of voting,” he said, adding that other variables, like getting contacted by political campaigns and feeling like one’s participation makes a difference, also matter.

Combined, Smith said this adds up to younger groups “having less of those things, in general, than older people.” He also described the political system as complicated, requiring voters to keep track of several races and candidates.

Tufts University’s CIRCLE indicated these individuals may be grappling with inadequate civic education; the inability to access transport or take time off from work; complicated absentee ballot rules “that trip up out-of-state college students”; and being ignored or taken for granted by candidates. People who have less experience voting may also find the process stressful.

“It can be kind of intimidating or overwhelming to exercise their right,” said Heather Kelly, president of the League of Women Voters of Seattle/King County.

Matteah Davis, a UW sophomore, also offered possible explanations as to why young people vote at lower rates, like not feeling knowledgeable about politics.

Apathy, however, was not on the list for Davis, a coordinator with the New Voters Project at WashPIRG, a student public interest group. Through its New Voters Project campaign, from Sept. 28 to Oct. 31 the organization registered hundreds of students on UW's Seattle campus, according to Davis.

“Even outside of WashPIRG,” she said, “… everybody I talk to has at least one thing that [they] really care about.”

Davis suggested ways the organization could target younger voters in the future, including holding more educational events, which could range from trivia nights to guest-speaker events. She noted WashPIRG could also do more coalition-building with other groups and continue coordinating with college professors to get voting information to students.

Getting more young people to vote

What’s on the ballot drives turnout, said Stuart Holmes, the acting elections director in the Washington Secretary of State’s office.

“When there’s something in there that’s very simple, straightforward … there’s passion,” he said, referencing firearm access as an example. “When it comes to candidates, it’s a little more nuanced, right? You got to do some research.”

More than 40% of 18- to 29-year-old voters named abortion as the main issue impacting their votes this year, over other hot-button topics like crime, inflation, gun policy or immigration, according to exit poll data.

The New York Times recommended reducing systemic barriers to registration and offering practical civics education as potential ways to improve voter outcomes. CIRCLE called for laws that ease the registration process – including same-day registration, pre-registration for people under 18 and automatic registration – all of which Washington has had on the books since 2018. The research organization also indicated that youth “are much more likely to vote when they're directly asked and encouraged to do so, both by campaigns and by relatives and peers.”

Kelly at the League of Women Voters rebuked recycled narratives about youth apathy toward voting, and argued it’s on older adults to create the infrastructure and connection between youth and government.

“We wouldn’t expect a young person to learn any other important and complicated skill without support and teaching,” Kelly said. “We shouldn’t expect them to do that for voting, either.”