Tearing down walls this election year, not building them 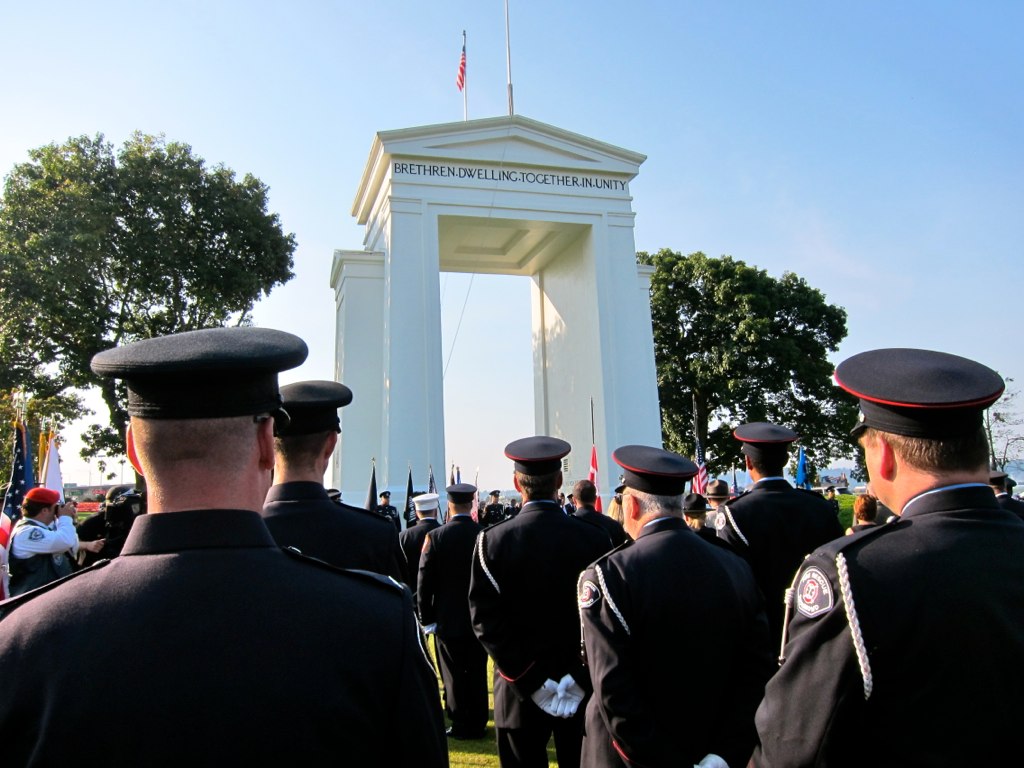 Service personnel stand in formation for a Peace Arch ceremony honoring 9-11 victims and respondants… from both sides of the American-Canadian border.

This election season seems to have a theme of walls. Donald Trump has proposed building a tall, “beautiful” wall along the United States’ border with Mexico. Some Washingtonians have joked that if Trump becomes president, they’ll build their own wall along the Columbia River.

That echoes a long-held idea in the settlement of the West: that this part of the country was a good place to escape the unpleasant politics of America. In the 1840s and ’50s, some people came west motivated by the desire to start anew and escape the contentious and sometimes violent politics of slavery, or the class barriers that kept ordinary folks from rising through systems run by ward bosses and corrupt political machines back east. A kind of separatism is embedded in our pioneer DNA.

This resurged in the 1970s with the publication of the utopian novel Ecotopia by Berkeley, California–based writer Ernest Callenbach. He envisioned a future in which Washington, Oregon and northern California had seceded from the United States and formed their own, ecologically minded paradise. Designed by forward-thinking hippies, it was envisioned as a country where ecological damage was restored, and people rode sleek Boeing-built monorails and ate locally grown foods. But the population was isolated from the world at large, hunkered down behind protective walls.

That fantasy has played out in real life by those who yearn for a new country called Cascadia—a Pacific Northwest republic that would include British Columbia. Over the past 25 years, Cascadia proponents have advocated a dream and waved a flag called “Old Doug,” which is blue, green and white with a Douglas fir at the center, a tree common to Cascadia’s forested parts. If the rest of the world goes to hell in a hand basket, the dream is that we can create new borders designed to protect our environment.

Walls rarely signal anything good, at least when it comes to politics. They are often defensive, inward looking, hostile. I think of the places that have built walls: Berlin, Cyprus, Israel and the Korean peninsula come to mind. Walls are often the symptom of a problem, not a solution.

In Washington, there is a history of celebrating the lack of walls. We once bragged about the lack of a wall between the U.S. and Canada. In Blaine, there’s the Peace Arch, which acknowledges a friendship marked by one of the longest borders in the world without military defenses. Today’s security concerns make it seem almost outdated—peaceful coexistence without walls. Still, it symbolizes something to which we can aspire.

There’s another symbol to keep in mind this political year. Fifty-five years ago this August, the Space Needle was under construction. The steel beams were reaching toward the tower’s narrow wasp waist. As the Needle’s consulting historian, I have written about the context for the structure—the Space Age, the Seattle World’s Fair, the city’s desire to create a beacon to the world. The Needle’s foundation is set in “New Frontier” optimism, along with nearly 6,000 tons of concrete and steel.

That same month 55 years ago, East Germany began construction of the Berlin Wall. As the East Germans walled themselves off from the politics and culture of the West—as they were building with barbed wire and aiming guns—Seattleites were building a platform to be seen by the world and to expand our own vistas of it. Even in the midst of the Cold War, many people still grasped the importance of being inspired by an expansive, hopeful view of the future. Walls limit possibilities, observation towers expand horizons.

This election year offers opportunities to tear down walls—as Ronald Reagan once urged the Soviets to do with Berlin’s. Can we improve our elections and make them more inclusive? Can we ensure that people of all incomes can afford to run for and hold office? Four of Seattle’s nine City Council members are multimillionaires—is that the right balance? Can our parties find more inclusive ways to pick delegates, to write platforms? Can we have presidential primaries that are truly meaningful to the national process, unlike this year’s? Are we using every means possible to register voters and make it easier for them to cast their ballots? Can we ensure that minority groups are not frozen out of the election process?

And can we tear down ideological walls without giving up our principles?

Republican Dan Evans, arguably the best Washington governor of the last half century (he served three terms, from 1965 to 1977), recently made an appeal for this in a Seattle Times op-ed article in which he laid out his wishes and worries for this election cycle. The hateful speech and hostility in much of our political discourse is putting up walls between lawmakers, politicians, voters. “I thirst for a candidate who would offer us hope instead of eternal political warfare. A candidate who would speak to us as rational adults rather than simpletons whose votes can be bought. A candidate who would propose comprehensive and even difficult programs to open the door of opportunity to all Americans.”

It all sounds so…antique. But we need to stop building walls with vitriol, deceit and ignorance.

This election cycle I am going to favor candidates who aim to dismantle walls that keep us apart, with extra credit for those who know how to shape a society that helps us see farther.