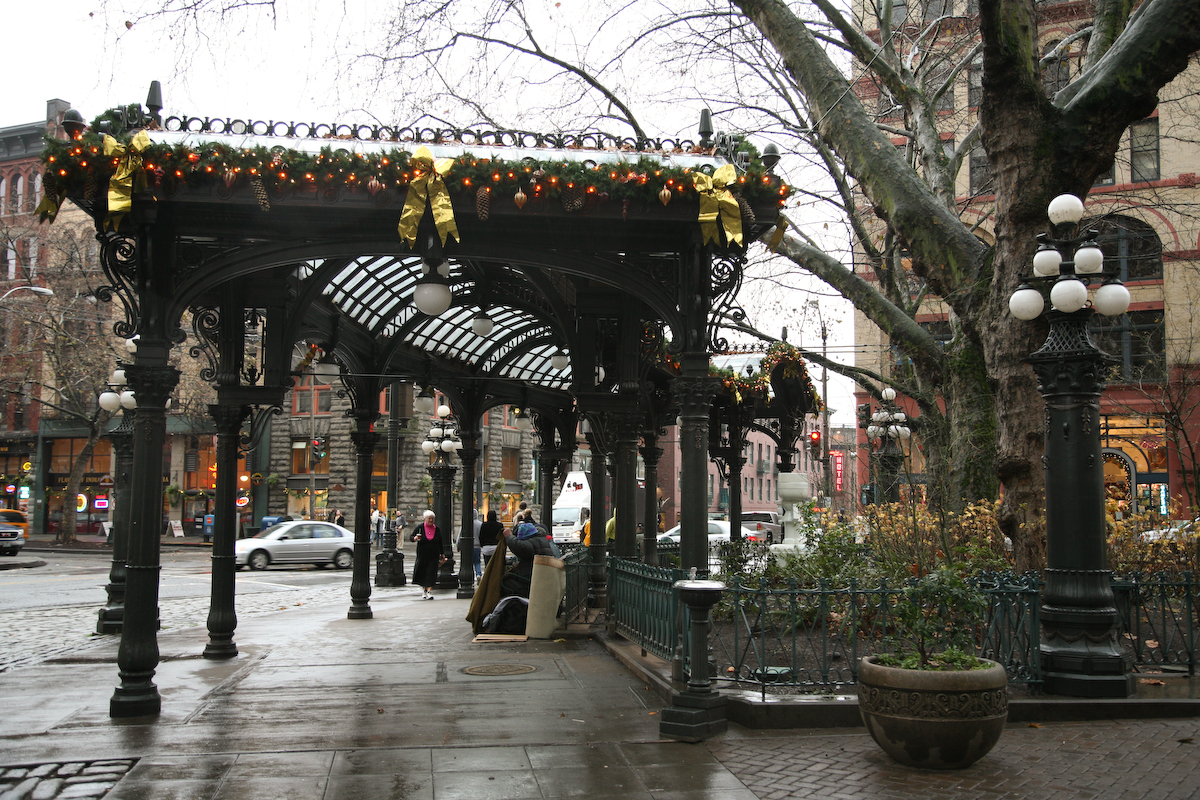 Two recent legal decisions have notched significant wins for heritage and historic preservation in both wild and urban settings in the Pacific Northwest. One will benefit hikers in the Olympic National Park, the other supports the preservation of the historic Pioneer Square in Seattle.

On the flip side, one decision worries wilderness advocates and the other may frustrate Seattle developers.

In the Olympic case, the Montana-based group Wilderness Watch sued the superintendent of Olympic National Park and the National Park Service for repairing five old structures in the 800,000 acres of the park designated as wilderness. They claimed the Park Service had violated the Wilderness Act and the National Environmental Policy Act, arguing they had “degraded the wilderness character of the Olympic Wilderness by rehabilitating and reconstructing man-made structures, and by using helicopters and motorized tools to do that work.”

Wilderness Watch has sued on this point before, objecting to work done on other historic structures in wilderness areas, such as a historic fire lookout on Glacier Peak. In the Olympic case, the bone of contention was repair work for trail structures — Botten Cabin, Canyon Creek Shelter, Wilder Shelter, Bear Camp Shelter and Elk Lake Shelter. The shelters, used by hikers and backpackers in the park, were collapsed, rotting or required seasonal upkeep. A Wilderness Watch board member stumbled on Park Service work on one of the shelters four years ago and that triggered an effort to halt the projects. The organization characterized the work on the shelters as a “building boom.”

Wilderness Watch’s reading of the Wilderness Act is that these manmade structures should decay back into nature.  The National Trust for Historic Preservation and the Washington Trust intervened in the case and strongly disagreed. The two Trusts argued that preserving historic cultural resources is required by law, especially those that are on the National Historic Register or eligible for nominations. There are 44 such structures in the Olympic wilderness area.

The Park Service argued that the Wilderness Act allows minimal maintenance and repairs to structures that are part of the traditional uses. Another area of disagreement: how to assess the environmental impacts of repairs and what technologies to use to fix them. The Wilderness Act attempts to keep mechanization out of wild areas. Wilderness Watch, for example, is vehemently opposed to allowing mountain bikes. The use of helicopters to ferry materials in and out is also controversial.

While the Wilderness Act is clear in its intent to protect wilderness, recognizing traditional uses is also part of the plan, so arguably the act both works for and against preservation of historic human intrusions. The federal judge in the case, Ronald B. Leighton of the U.S. District Court of Western Washington in Tacoma, dismissed Wilderness Watch’s lawsuit on Dec. 14, saying the Park Service was acting legally in maintaining the existing historic structures and using the least intrusive means of doing so. The judge indicated agreement with an earlier case’s conclusion that the Park Service was not charged with maintaining wilderness as a “museum diorama.”

The National Trust hailed the decision in a statement. “We applaud the Court for ruling that the designation of wilderness need not result in the erasure of cultural resources within that landscape,” said Brian Turner, senior field officer and attorney for the Trust. The Trust noted that the decision could have far-reaching effects in terms of how historic structures are treated in wilderness areas.

George Nickas, executive director of Wilderness Watch, said of the judge’s ruling, “It runs counter to every other case that’s been heard in court, including the U.S. District Court of Western Washington.” Nickas said the organization hasn't decided whether to appeal, but the decision was “not good for the Wilderness Act.”

On the urban side of things, a lawsuit by a developer of a property in Pioneer Square — 316 Alaskan Way South — against the city of Seattle challenged the city’s criteria for evaluating possible new structures in historic districts. The plans for 316 became the subject of great controversy. The Pioneer Square Preservation Board, after months of negotiation with the developer, decided not to approve a new mixed used residential building with some 200 units because the proposed structure was out of scale with the surrounding historic properties. Keeping new buildings in scale is crucial to maintaining federal standards for historic districts, which must maintain their visual integrity.

In 2015, the head of the city’s Department of Neighborhoods ignored the Preservation board’s judgment and granted a certificate of approval for the project anyway, saying that the only factor that mattered in terms of scale was whether the building met zoning height requirements, which it did. The area had been up-zoned. Critics worried about the mass of the building, its roofline and façade and opposed the design. A citizens group, Save Our Square, appealed to a city hearing examiner, who reversed the approval after expert testimony about the importance of building scale and compatibility in Pioneer Square. The developer then sued to get the examiner’s decision overturned, claiming the city’s use of terms like “scale” and “compatible” made the preservation language “unconstitutionally vague” and that such judgments were subjective.

In his decision on Dec. 12, King County Superior Court Judge Bill Bowman disagreed. He found that the city’s preservation ordinance defines those terms and the developer had plenty of opportunity to learn what they meant in consultation with the Preservation Board, or by understanding the Secretary of Interior’s standards for historic districts. The ordinance, he found, is constitutional.

But the judge also concluded the hearing examiner had overstepped by reversing the certificate of approval, and that decision should go back to the Department of Neighborhoods for reconsideration and in light of the substantial expert testimony the appeal before the examiner generated. That includes opinions from academic experts like the University of Washington’s Jeffrey Karl Ochsner; the founding head of the Pioneer Square historic district, Art Skolnik; and three past and current State Historic Preservation Officers.

In a statement put out by Save Our Square, Jessica Lucio, a resident who fought the development, said “The developer’s lawsuit was an existential threat to our community’s efforts to protect historic buildings and historic districts. Judge Bowman’s ruling makes clear that the city must determine whether new buildings are in-scale with their surroundings and that the ordinance designed to do that is constitutional. That is a huge victory for the community.”

In the meantime, the original Portland developer, Gerding Elden, has sold the property to Greg Smith’s Urban Visions, a Seattle company with experience working in Pioneer Square. One of their projects is the highly praised new home of Weyerhaeuser on Occidental Park. Smith, sounding like someone who is familiar with Seattle process, was quoted earlier this year as saying he planned to exercise “more sensitivity” in plans for 316 Alaskan Way South.

Updated: An earlier version of this story said that Wilderness Watch has supported water tanks for Big Horn sheep. In the case referred to in a previous court case, they opposed the tanks. The reference has been removed.