The summer of 1970: When Seattle erupted 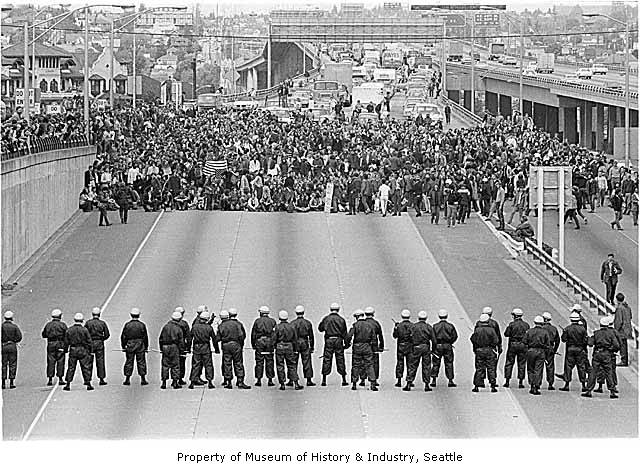 Thousands of UW students and faculty members blocked I-5 during a May 5, 1970 protest against the killing of four Kent State University students by National Guardsmen and the bombing of Cambodia by U.S. forces.

Monica Guzman of the Evergrey asked me recently about the intense feelings pulsing through Seattle in response to Donald Trump. The demonstrations at Kane Hall on inauguration night, the Womxn’s March, the Sea-Tac protest, the Westlake rally and march. Protests are coming fast and furious. The city throbs with anxiety and passion, and a new intensity of activism aimed at the Big Bad in the White House.

Guzman wondered: Is this comparable to anything Seattle has seen before?

It’s hard to equate. I wasn’t around for the Potlatch riots or for the General Strike of 1919. And the Womxn’s march was unprecedented in scale.

The first memory that the question stirred for me was of the WTO anti-globalization protests in 1999. I covered the demonstrations. I will never forget the energy and almost Woodstock-like atmosphere as soggy, costumed protesters converged on downtown, chanting and playing music. There was even an anarchist marching band! This was before the tear gas, flash bombs, rubber pellets,  rocks, and newsstands flew through the air, shattering windows and the myth of Seattle nice. For a moment, Sea Turtles and Teamsters seemed like a beautiful harbinger of future alliances.

I have to go back 47 years to come up with a stretch that reminds me of the last couple of weeks. It was more violent, but also turned people into the streets to protest a far-right administration that was violating norms.

It was spring of 1970, and national furor over the Vietnam war was reaching a crescendo when President Richard Nixon announced plans to expanded the war into Cambodia. Protests erupted nationwide, and students were murdered by authorities at Kent State University in Ohio and Jackson State in Mississippi.

Here in Seattle, the University of Washington campus erupted with protests, student strikes and a takeover of KUOW radio, which was declared “Radio Free Seattle.” There was vandalism, sabotage, office occupations, and attempted arson on campus. The streets of the city were filled with protestors and outrage. The Seattle police “Tac Squad” wielded tear gas and clubs.

As a young, politically passionate teenager, I had been attending anti-war protest rallies and marches since 1968. In April1970 I had been one of the organizers of an “April Fool’s” anti-war rally at Westlake under the Monorail, featuring a speech by UW professor and Seattle Liberation Front organizer Michael Lerner, who shortly after was indicted as one of the “Seattle Seven” and charged with conspiracy in relation to a riot at the Federal Court House earlier that year. Personally, I thought rioting for peace was absurd.

Walt Crowley writes very insightfully about this period in his memoir of the ’60s, “Rites of Passage,” in a chapter called “Things Fall Apart.” Some wanted peace, others wanted revolution.

I was in school at the very new Overlake School, then housed in a YMCA in Bellevue. When we heard on mid-week afternoon that thousands of UW students and antiwar activists had bolted the UW campus and taken over I-5, a bunch of us cut school and tried to find the protest. We couldn’t reach it, but there was plenty of follow up in following days, including a march the very next day from campus to downtown, where police used tear gas to stop an attempt to block I-5 at Cherry Street.

The outrage was intense. It was moving to see huge crowds — not the extraordinary 120,000  , but thousands pushing back against war, “fascism” injustice. I remember how the types of participants in the marches began to change: more moms and dads, more kids, more elders, more people in office buildings flashing the “v” peace sign as we filed by. Outrage was moving beyond draft-age students to take in Americans tired of the war, tried of protests, tired of violence, tired of being lied to (Nixon had promised to end the war in 1968, not to expand it).

We knew then that the protests were not an end in themselves. And there were divisions in the protestor’s ranks between a minority who advocated violence, and the vast majority who did not. We knew that our marching was only a small piece of making change and bringing a sense of moral outrage to America’s role in Southeast Asia and the politics at home.

Nixon had been elected in a popular vote squeaker in 1968 — a truly dark day in American history. He seemed like an aberration for the progress of the 20th century, but a divided nation saw him as the man to fight communism and get things done at home. His hard-hat labor supporters loved his toughness, his media-bashing, and his willingness to break the heads of long-haired college kids, the children of the “elites” that Nixon and his minions railed against.

While the protests of 1970 mobilized many people, they did not turn the political tide. Nixon was re-elected in a landslide in 1972, winning a majority of the new 18-year-olds who could vote for the first time. He even won Washington State.

That campaign, however, contained the seeds of his eventual downfall, the Watergate scandal that unfolded and resulted in Nixon’s resignation in the summer of 1974. But those four years after the spring rebellion of 1970 were long and damaging. It stuns me to this day that Nixon’s corruption and criminality lasted in power as long as it did. I got a real education in what makes America tick.

I loved manning the barricades of resistance, but I also threw myself into grassroots political action in the following years — caucuses, conventions, volunteering. While still in high school I was an anti-Scoop Jackson delegate to the county convention in 1972 and volunteered for George McGovern in the Oregon primary. I tried to channel my outrage into constructive channels as my interest in street protests waned.

There were frustrating times ahead, dark times. But there were lessons, too. I learned that resistance has to be applied at all levels, as one channel does not work. That individuals can do what they can do — there’s no shame in not being able to do it all. I learned that huge change rarely comes quickly, and that bringing it about requires a siege. Upholding our democracy is a marathon that never really ends.